[Archive] The Mask of Madness 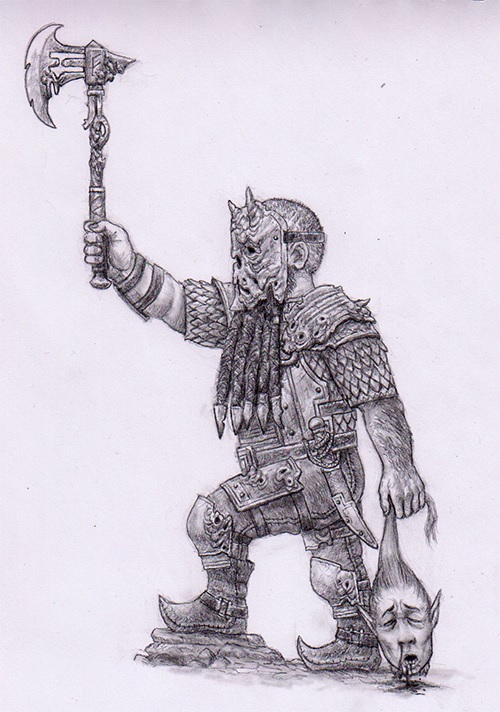 This is but one of many stories, whether truthful or filled with falshehoods, as told by the Chaos Dwarfs about those horrific masks worn by demented megalomaniacs, insane craftsmen, madmen, killers and torturers alike. For though the price is high, ravenous ambition festers in many a ruthless heart among the Dawi Zharr, and what true son of Hashut would ever balk at the prospect of overwhelming power? The tales of these willing slaves to darkness are legion in number, and dreadful in nature. For they are narratives of bloodshed and might, of horror and unrelenting oppression. They are tales of malice triumphant and of backs broken, of bloodied blades and fell deeds. They are accounts of the fallen, of mortals driven over the edge in their hunger for power, of names and lives plummeting into the abyss of infamy. Above all, they are legends of Dark Gods rejoicing at souls lost behind darkness, and though you might ask why anyone would be insane enough to wear it, you might find yourself at the end of temptation to hide your face and put on the mask…

Such are the stories of the masked ones, as told by the Blacksmiths of Chaos.

This is one such story.

Birth of Slaughter: One dark night of ill omens did a craven Daemonsmith Engineer known as Muzharruk Halftame forge a baleful facemask out of hellish essence and a trapped servant of the Dark Gods. The resultant device was undoubtedly powerful, yet the Daemon within was barely contained, and its foulness leaked from the hideous horned visage of the metal mask akin to tendrils waiting to snatch any vulnerable mortal flesh and soul if could find. Thus did the headgear known as the Mask of Madness come into being, conceived in a stoking hot Soulfurnace and birthed by wicked hammer upon a cracked anvil carved with forbidden runes and sorcerous wards which glowed and glared in the darkness of the Hellforge.

It was soon discovered during forge trials, at no small cost in slave life, that the Mask of Madness gradually seemed to possess or even consume its bearer while worn. Yet the fearsome combat prowess garnered within the sorcerous item made it an irresistible treasure to some Chaos Dwarfs, and thus it was that the perilous wargear wandered from hand to hand. For death, unwillingness to suffer the mask any longer, hunger for power and greed all conspired to constantly shift the face under the Mask of Madness, and owner and bearer never remained the same for long.

Never, ever, except for once.

Life of Slaughter: One day, a strong and ambitious Dawi Zharr warrior donned the mask prior to a routine battle somewhere in the vast Dark Lands. His name was Zhugallur of clan Munzuk, and he immediately became so exhilarated by the experience of wearing the mask, that he never took it off. In his first masked battle, Zhugallur became a ferocious murderer of otherworldly lethality, for he rampaged almost single-handedly through a whole Goblin tribe, and his kinsfolk were forced to restrain the bloodthirsty man from butchering all enslaved captives which were their spoils of battle. After the fight, Zhugallur would not remove the Mask of Madness, and neither would he listen to any such advice. Instead, he guarded it jealously and aggressively against any thief, lashing out and barking at anyone who dared approach him. Zhugallur became a figure to loath, hate and fear in equal measure.

Nevertheless, this lonesome brute was a most valuable asset to his Overlord, and thus he participated in multiple raids and campaigns over the years without ever again showing his mortal face of flesh which hid under the Daemonforged visage of metal. Zhugallur of clan Munzuk struck terror into the hearts of foe and slave alike, and he never ceased to unnerve his brethren. On the battlefield, he was a fury from hell, a frothing maniac and a whirlwind of frenzied destruction. Yet off the field of battle he was seldom himself, for Zhugallur lapsed into bouts of apathy, gibbering insanity, coma and spasms.

Likewise, he would occasionally engage in hollow-sounding conversations with unseen and unheard beings known to none other than himself, and Zhugallur would even stoop to the depths of bestial stupidity, whereupon he ran around on all four, baying and howling to the skies with a long chain leash around his thick neck to keep the crazed warrior with the army on the march. Sometimes, masked Zhugallur attacked the chained slave gangs and ripped them apart when behaving like a predatory animal. Once, when in garrison, he was found hanging upside-down from the roof beams of a fort, akin to a bat, where he remained stock still and silent, staring into nothing for twelve times twelve heartbeats. Then, he somersaulted around the tangle of roof beams, jeering and sounding to all the world as if he was hunted by fell spirits. This went on for a full sixty heartbeats, before he frozw upside-down once more. This unusual procedure was repeated sixty times in a row in sight of confounded companions, never to be performed again.

The utter depths of the corrupting influence of the Mask of Madness may be gleaned from how Zhugallur lost his worldly greed and forgot to collect his payment and loot. He ceased to ask for his share, and soon his calculating Overlord stopped handing it out to him. Truly, it was a piece of monstrous equipment, and fellow Dawi Zharr made hand gestures and warding motions in the air whenever they passed by Zhugallur of clan Munzuk.

Whenever the permanently masked warrior became too dangerous to his kinsmen and surroundings off the battlefield, he would be drugged by his companions, who shackled him inside a tight black iron cage, which on the march was dragged behind a blind ox led along by a deaf Hobgoblin thrall. Gripped on end by insanity, Zhugallur was deemed unfit for any ritual worship other than bloodletting sacrifice at the fiery shrines and mighty idols of the Father of Darkness, and thus other Chaos Dwarfs came to fear ever so little for his soul out a of sympathy which they never had expected to find within their own black and cruel hearts.

As he was kept away from most of the proper worship, Zhugallur was likewise isolated from any Dawi Zharr womenfolk, though he was thrice let loose upon unfortunate captive Dwarf dams, who remained traumatized from the event and never truly recovered their state of mind. As time went by and less and less remained of Zhugallur’s identity, all but a few ceased to call him by his actual name, for from now on he became known as the Defaced One, and the Defaced One did not object in the slightest to this change in practice.

In combat, the Defaced One slayed mighty champions, cunning rangers, sly spellcasters, hulking monsters and great leaders alike, and he would stomp untouched through magical barrages which would have seared the flesh off the bones of other mortals. His battlecries consisted more often than not of obscenities, blasphemies, Empyreic curses and the forbidden names of Daemon Princes, lesser Chaos deities, the Great Four and even the twelve unspeakable names of the fierce Bull God Himself. Sometimes, Daemonic bodies seemed to flicker and materialize out of the Defaced One’s dreadful breath, and these transparent limbs and faces from out of the Realm of Chaos may bite and rip apart anyone unfortunate enough to stand before the crazed killer, but at other times they would merely pinch and taunt and give off catcalls.

Thus it was that the Defaced One won dark renown and bloodied glory behind his Mask of Madness.

Death of Slaughter: Unstoppable he seemed, yet nothing lasts forever. Even the butchery of the Defaced One came to a halt at last, down south in distant parts of the world. For outside the Fortress of Dawn, the the Defaced One partook in a piratical skirmish wih an Asur patrol group, yet the frail High Elves fought like vengeance itself, and they killed many a Chaos Dwarf and Hobgoblin slave soldier before succumbing to death or the dreaded shackles of slavery. At the conclusion of the clash, the Defaced One had been severely wounded in his right side by High Elven arrows and spear thrusts through his armourr. In mute triumph he stepped forth wordlessly, holding the severed head of the Elven patrol leader in one hand while raising his thirsty battleaxe to the skies, whereupon the feared warrior collapsed in a pitiful pile of flesh without strength or will.

As his wary companions drew close to investigate the injuries of the fallen madman, they discovered an ugly head wound on his right side, fresh from a flimsy but sharp High Elf blade. The weapon had somehow pierced the edge of the mask, and since the wound ran deepest under it, the Chaos Dwarfs decided there was nothing to it but remove the reeking Mask of Madness from the the Defaced One and treat the head injury as best as they could. The youngest raider was chosen for the unlucky task of unclasping the head strap and lift off the Daemonforged visage from Zhugallur.

As the youngster did so, a shocked silence settled over the band of grizzled killers on that foreign shore. Beneath the Mask of Madness, the naked face of a white skull grinned at them, its bearded jaw clenched shut despite lack of muscles and sinew, its unseeing sockets nothing but hollow cups of bone. The flesh at the front of the Defaced One’s head had long since been devoured by the insides of his insane piece of headgear, yet the rest of his head and body was untouched. After this glimpse of the the Defaced One’s real visage, Zhugallur’s head slumped dead to his chest, his soul more than likely taken far away by the Daemon inside the mask. His companions took the Mask of Madness with them and left the Defaced One for carrion eaters to feast upon.

No one truly knows what became of the dreaded mask, wrought by Muzharruk Halftame, after the demise of Zhugallur of clan Munzuk, yet this is for certain: The Mask of Madness has showed up time and time again on different faces of various Chaos Dwarf warriors foolhardy and power-hungry enough to wear it throughout the centuries., and at each occasion it soon vanished for some time as the scarred possessors of the Daemonforged mask traded it away to save what remained of themselves, and if possible escape the infamous fate of the Defaced One. Yet the hideous headgear always resurfaces, its bearer reaping insanity in mind and dark glory in blood alike, and it seems as if high Hashut Himself has destined it to become one of the lasting heirlooms of the Dawi Zharr.

Such is the nature of the mask, according to the Blacksmiths of Chaos.

Nice story i liked the ending