I’m wanting to create some unique Tzeentch warriors, but wasn’t sure where to get what I wanted. I was hoping for some sort of avian-type warrior with feathers that I could use, as opposed to simply painting regular Chaos Warriors blue… does anyone have any ideas of where to get such a thing? I’ve considered simply using Kroot heads for the warriors, but that doesn’t seem like its enough to really be unique…

Several types of birdmen available with the Wargods of Aegyptus from Crocodile Games.

The Heru are like hawkmen (archers, two hand-weapons and halberd/shields)- 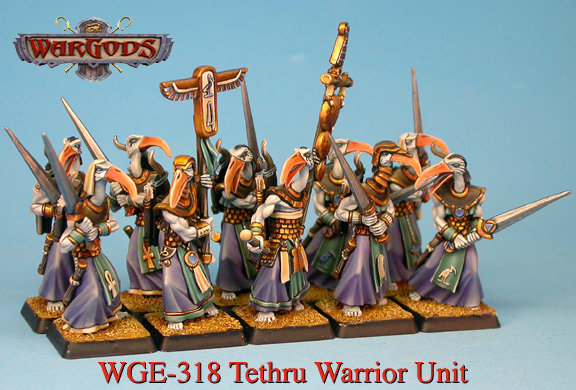 Those Tethru look nearly perfect! Thanks!

Were the first ones I found, but remembered the Heru. Thought the Tethru would fit Tzeentch nicely myself some time ago

Glad to help, just show us the results

I was totally unaware of that line of figures…some vey interesting sculpts! Not keen on the Nekaru…but the other two look very cool.

You could make an excellent beastman proxy army with that whole line of figures as well…would be very fun to do.

Ordered 20 and they’re on their way! :cheers

I particularly want to use the Sebeki (crocodile-people) as minotaurs

Here all the models; I bought them from FRP games and got them at a discount ($40 for 20) and had them within 3 days.  This is my first experience from them and I can’t complain.  :D  I went ahead and assembled them, as pictured below with a few random Chaos Warrior and Daemon bits, and since then I have based them and I’m getting ready to prime them-- I’ll keep you updated!

EDIT:  Just a side note, in case anyone is interested, these came with 20mm bases and twice the heads-- half armoured, half unarmoured. I based them on 25mm bases to make them consistent with WoC.

nice take on the theme. I think you’ll have your unique army that you are after.

great conversations! I always loved the birdmen models from crocodile games. Good work keep on going. I guess an whole army of them will look awesome.