The battle report is written by my perpective, for the Orc story go here: Oldhammer Battle – Treachery at Legbreaker Ridge | The Lost and the Damned

The Ropsmenn, the fall from grace:

The Vampire now known simply as the Rotten Prince, the fallen son of Kislev pondered how he had fallen so low. Once he rode at the head of a mighty Warhost, Destroyer of Chaos and beloved of the Ice Queen.

Bitter, corrupted and twisted by the Blood Kiss received hundreds of years before by a Black Clad Knight bearing the symbol of the Red Dragon. The Rotten Prince now seeks not only his revenge on that Black Clad Knight but also on all the living, those that feel the warmth of the sun.

Now his former kinsmen The Ropsmenn serve him in death as well as they did in life. His Demi-Boyar the Wight known as Sir Boney the Black leads what’s left of his once proud Winged Lancers. Hardy Kossars now nothing but rag and bone still retain there missile weapons and at his whim Catapults made from bones has been constructed.

Only one thing stands in his way of marching on the Old World, a foul tribe of Greenskins known as Kanbok’s Kingdom Krusherz led by the infamous Kanbok Goresmasher. Soon he shall feed on Greenskin flesh and it’ll taste like victory.

Kanbok Goresmasher has led his tribe of the Greedy Maw from the lands east of the Mountains of Mourn in search of new conquests. Whether he has fallen out with Hobgobla Khan or is even still in his service, nobody can say for sure. Fact is that Kanbok seems like an Orc on a mission, who’s ambition is to carve out an empire in the lands of the west, where plunder is said to be plentiful and the enemies weak.

For several years the Greedy Maw battled their way across the Dark Lands, hiring out their services in exchange for the best in weapons and war machines, many of which built by the Chaos Dwarfs.

When approaching the northern World’s Edge Mountains they encountered the Leerin’ Moon Goblins who were controlling access to one of the few passes into the Old World and had grown rich on levies.

Kanbok demanded the Goblins submit to his rule or he would batter their fortress down with his war machines. The Goblins agreed to a parley and invited Kanbok to a banquet in his honour. His experience in the lands of the Hobgoblins had made Kanbok wary of trickery, and so he brought along his Trolls as food tasters. When one of the duo turned from green to blue after tasting the squig stew be had been served, Kanbok declared negotiations over and helped himself to a side order of Goblin King sashimi. The remaining leadership of the Leerin’ Moon tribe quickly accepted his terms of unconditional surrender.

As the first snow began to settle on the eastern foothills of the World’s Edge Mountains, Kanbok led his army across the pass and into the north of the Old World, expecting to catch the weakling fiefdoms of the humans off guard.

Once his army reached the western side of the mountains, they encountered hunters from the rag-tag Orc tribe of the Split Tongue. A bloody skirmish ensued and the Greedy Maw emerged victorious. Back in the camp of the Split Tongue, their Shaman Zogdrek divined from the entrails of their slain Warlord that the gods favoured an alliance with the new arrivals.

With a foothold established in the Old World, Kanbok immediately set sight on subduing the surrounding kingdoms of men. Zogdrek advised him that the closest was ruled over by a sickly looking human called the Rotten Prince, who’s army would be a push-over, consisting of nothing but skin and bones, and sometimes not even that. With these lands added to his new realm, Kanbok would soon be set to fulfil his mission. 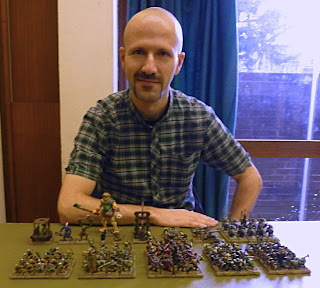 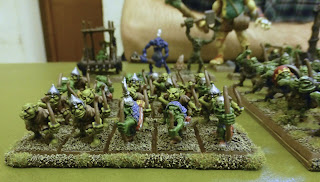 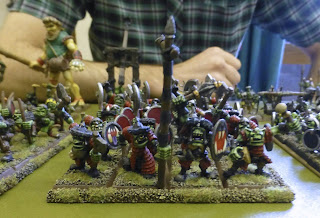 The Rotten Prince awoke to the sound of the Liche’s high pitched and frantic chanting, angered to have his slumber disturbed by his erstwhile ally he set about finding the cause of his Liche’s increasing frantic activity.

Upon exiting the Norse Dwarfen Crypt, he could taste the scent of Greenskin upon the horizon and knew at once what had provoked the Liche as he too could feel the Greenskin Shaman at the back of his skull pounding like a hammer.

At once he ordered the battle lines to be drawn, out of what could be summoned from their half sleep. 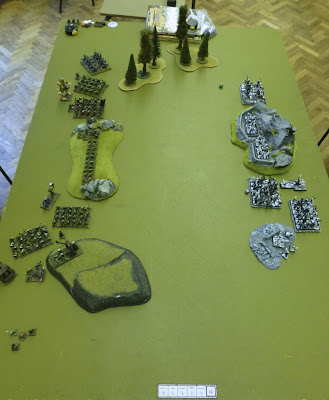 So deployment was a simple one for me, staying in the story I’ve deployed around the crypt with Sir Boney the Black and his Rotten Winged Lancers on the far right to crush anything in his path. 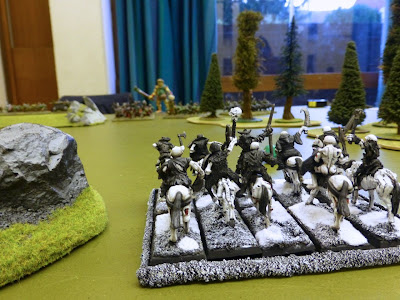 On the left was the Skull Chucker and 2 blocks of Skeletons backed up by a Plaque Cart. 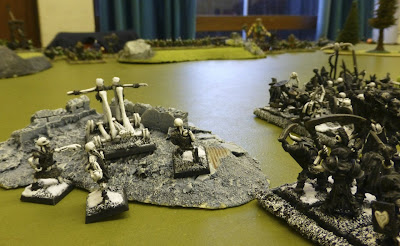 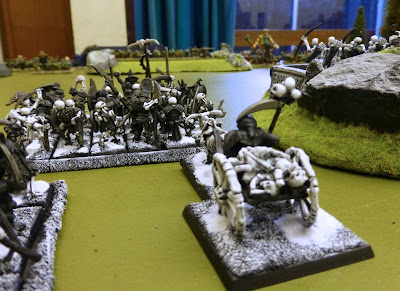 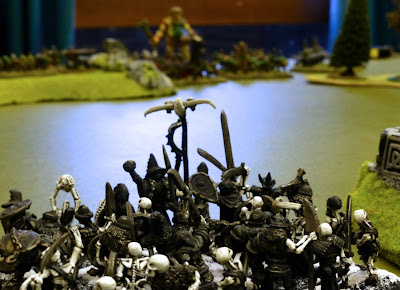 The Greenskin had the first turn dew to keeping in with the story/background, so they surged forward with only the Trolls wandering off and a few arrows were fired in anger at rival Mobs.

Zogdrek overwhelmed The Prince in a display of pure magic power from Gork or Mork (Also known as the Chuckle Brothers). That Shaman sure is a sneaky Git and one to watch out for methinks.

The only way out of the labyrinth of suffering is DEATH 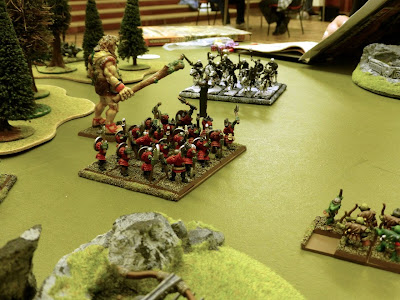 The Skull Chucker fired his first and only on target shot during the game, killing 8 Goblins… Worth 80pts? Um ask me after another few games. 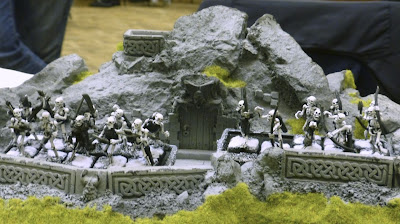 The Kossars with Crossbows and Bows after receiving 2 loses just before fired on the Goblins and killing 2, this is the some total of what they done the whole game other then killing a few Fanatics in the next turn.

My first turn ended with me splintering the leg of the The Leerin�?T Moon Shaman, little did i know how this would help with the story

More Oldhammer goodness and pictures on my Blog: www.oldhammeronabudget.blogspot.co.uk