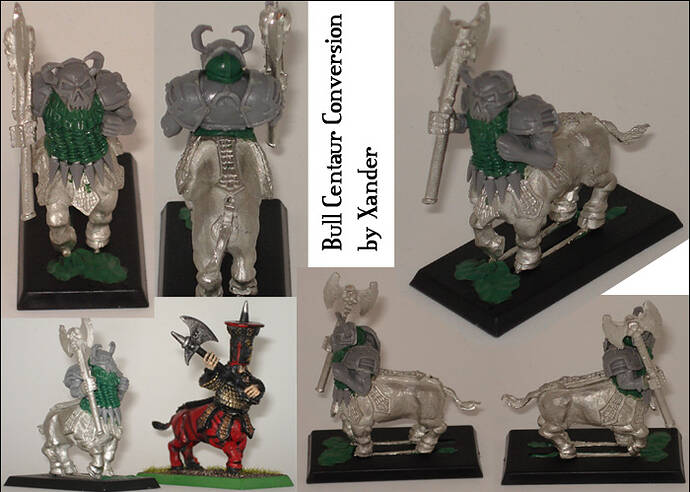 Fairly easy to convert. Take the standard Bull Body, add a small waist of GS and sculpt it as scale male merging with the scale on the Bull part. Add an old Chaos Warrior Torso to the top. Add trimmed Marauder shoulder pad for mask. Take some of the smaller shoulders from the old Chaos Warriors and cut off the arms and add them to the torso. In keeping with my “bare arms” scheme for my army, I used Goblin arms as shown. Add trimmed metal Halberd to goblin arm. Horns on helmet are from a Marauder Flail. Add beard and bib and spikes, as seen in my other conversions, starting with EE’s work.

Special credit to Grimstonefire. My older conversions which I dismantled and used here are based off his old Immortal Conversion:

So, obviously, I went for the mask look, beard with spikes, bare arms. I strayed a bit from the warrior look for the Heavy Armour look. I also intend to add a shield to him. Most likely a Marauder shield.

If you saw my Earthshaker thread, you will see I got some Seige stuff for $1, the pack also comes with 4 horses. They are fairly stout, so I am using fimo to mock up a potential Bull Centaur Conversion.

Looks great cant wait till I get some!

i all ways thort the old one used to look corny but with that i can have my cake and eat it to, nice job man

Bull Centaurs! yo xander i luved the 1 minute i saw of your video. i got bored of waithing for dial up to load it. you should make a bull nectaur conversion vid

I am not sure of the merit of such a video. The purpose of the CD video is to show you the basic techniques. Basically, it would be the same techniques for a BC… But I am glad you liked the videos!

What’s with all the “thread-'O-mancy” lately?

A couple of new members going through and resurrecting the older threads.

lol you have a bunch of new minners they keep digging up old stuff!!!

I might have to snag that idea for more Chaos Dwarf warriors! That way I can have Big Hat AND Hellcannon style!

What's with all the "thread-'O-mancy" lately?

Time to call in the Ravensguard Knights I feel...