Army loadout for the CD mod in Total Warhammer II

The dark elves of Hag Graef hadn’t moved that far inland. Once their ship had made landfall, their assorted infantry, cold one riders, and an entire war hydra had traveled barely a few miles inland, marching roughly in the direction of the Fortress of Vorag. The fortress’ Mingol had been alerted, as had a nearby herd of bull centaur who arrived to reinforce the existing garrison. It was a warband led by Darbakh Smokestack, however, marching from a fresh victory against the goblins of Red Cloud, who caused the wretched dark elves to flee to their ships. No battle had even occurred, yet the sight of the cold one riders as they abandoned their own infantrymen behind them was a satisfying sight. Still, Darbakh couldn’t partake in the satisfaction of his brethren who taunted the fleeing dark elves; they’d set foot on the mainland, thus tainting the Darklands in his eyes.

One mere footstep onto their land was unacceptable. The only penalty was death.

Hi folks! I’m about 117 turns in to a campaign which saw a horrible start because I had no idea what I was doing. I’m doing a little better now: the Knights of Caledor or whatever have been obliterated, nearby greenskin hordes have been pacified, and the closest beastman herd even has good relations. Those pesky dark elves on the islands to the south, however, irritate me with their presence. Here’s where I need help.

Could you fellas take a look at my army loadout in the screenshot below? 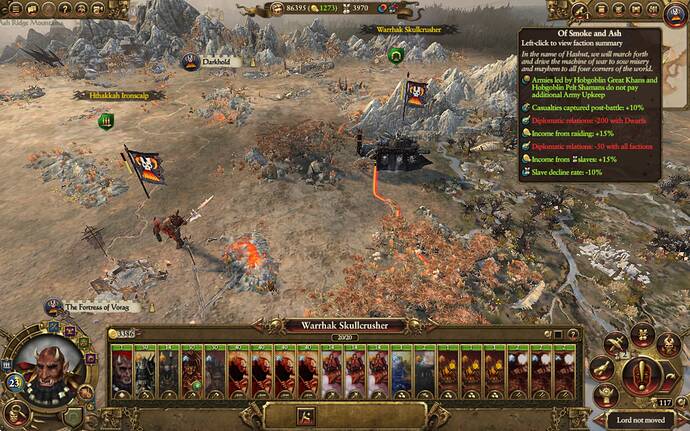 My general is riding an Iron Demon, and my skill choices have focused on lowering army upkeep rather than outright combat power. The dark elf army features a ton of cavalry plus a hydra and some ranged units. My strategy so far as been to literally sit at the back of the map without moving, wait for enemy units to approach, and watch them flee a few seconds after moving into artillery range. Any who get closer get blasted by my annihilators and the magma cannon - as well as my general’s new iron demon. In the sole instance wherein cavalry got close, my infernal guards shot with their fireglaives, moved into melee, and allowed one of my four melee units to perform the hammer and anvil maneuver.

Is this a suitable strategy for the cavalry heavy army that I’ll be facing? All the greenskins I’ve faced, and even the high elves, were melee infantry armies. I’m wondering if I need to switch things up for the dark elf cavalry or if my annihilators and fireglaives will suffice.

Few conquered peoples had wailed into the night as the dark elves did when the city walls of Dread Rock finally crumbled to the ground. So assured had they been of their victory, so dogmatically convinced, that the entire population fell into hysterics when the last rank of the Black Guard were broken by Darbakh’s Immortals. Militia and civilians alike panicked and fled to their homes, to dead-end alleyways, and against sheer walls within the city, their minds entirely bereft of reason upon witnessing their supposedly impenetrable city overrun.

Their screams were so pleasing to the despot that he even concealed the number of survivors in the Dragon Isles from his superiors on the mainland, for, were he to report on the true tally, they only would have been demanded by one of the large fortresses to harvest elf blood. No…their suffering couldn’t end that soon. The dark elves, so haughty and proud, were shaved and shackled, forced to reconstruct the walls of Dread Rock under the whips of hobgoblins; those who collapsed from exhaustion were eaten by the bull centaurs in full view of the survivors. Dreadlords toiled next to their former subordinates, erasing any semblance of the social structure which once was. Beastmasters were caged and forced to dance like tamed bears for the entertainment of black orcs. Witch elves demolished their idols and constructed altars to Hashut lest they bed fed to Darbakh’s pet boars. The dark elves’ own slaves were permitted to seize food, clothing, and bedrolls from their former masters at will. The dark elves wouldn’t last long, barely long enough to repair Dread Rock’s facilities, but the screams every night were worth it.

I finally found the time to sit down and finish conquering the Dragon Isles! I’ll write a brief summary below along with my impressions of my roster.

I actually tarried a little too much with this and didn’t secure the isles until turn 212 or so. Hag Graef was well armed, and their capital city was reinforced with the armies of two lords. I needed two lords of my own with full rosters, plus three lords with half-rosters on the mainland to hold other factions at bay. For a long period, I maintained trade relations and a non-aggression treaty with the dark elves too, though I hated every turn of it. In the end, my two armies were the artillery-based one in the screenshot above, and a second army based on monsters (ogres, trolls, centaurs, lammasu).

The monster army didn’t fare as well; Hag Graef seemed to be the master of that, throwing tons of dragons, hydras, and monstrous units (including ranged monsters) into the melee. I never lost a single battle, but against my monster army, they did cause considerable damage. In the siege of Dread Rock, I even lost an entire unit of centaurs despite the auto-resolve prediction being a decisive victory with low casualties.

What worked against Hag Graef is what also worked against all the greenskins, beastmen, and Nagashizzar on the mainland: artillery. The army above is all artillery units save for a defensive line of four fireglaive infantry and four pure melee units; even my lord is riding an Iron Demon and has a longer range than elven archers. Holy moly, was this army fun! Usually, curb stomping an enemy who has no chance against you is boring and repetitive, but I’ve been doing this to all my enemies for at least fifty turns and still can’t get enough of this. I set up the following lines:

I just park them. I don’t move at all; I just wait for the enemy to walk into their own flaming deaths. I’m literally not even playing the game yet I’m laughing like an idiot during every battle, handle off the keyboard and mouse, watching black dragons get shot out of the sky. My work is actually prior to the battle, not only setting up my lines but choosing my position. Terrain is extremely important, and I obliterated two separate armies of undead with my one artillery army just by positioning my units at the highest point of a ridge overlooking a valley. The dark elves were no different: their ranged medusa monster thingies couldn’t even get in range before dying next to all the manticores. My battles with this army are like dominoes: your work goes into the setup, and then you just sit back and watch.

Problems still occur when I try to angle my units diagonally; I can’t seem to get them to face the enemy during the pre-battle setup, though that’s probably due to my computer illiteracy and habit of using a touchpad over my mouse. My four melee units see so little action that I may also switch them out for more fireglaives; the latter can also protect the big guns (if that’s every even needed), and their firepower is respectable in and of itself. I’m not sure if I’d be better off with devastators, though.