Being a collection of miscellaneous writings on the esteemed topic of Blood Bowl:

“Goooaaal! It’s a GOAL! A bloody, magnificient unparallelled goal! G-o-a-l-err-h! Did you see that, Ham?”

“Sure did, Krogg. Straight out of textbook.”

“Cheatnote, rather, by the look of those fans. They’re all jumping onto the pitch!”

“Hahaha, now look at that Hobgoblin run! Silly stuff. Ouch! One moment scoring, the next dead.”

“Indeed, Krogg! The fans have both teams surrounded, but why are the mobs attacking their own teams…?”

“There went the cheerleaders! Yuck!”

“Now the referee’s gone. In four different directions at once. Oooh, pretty nice quartering there by those Amazon fans!”

“For sure! An’ do you know what those curses and obscenities are? Those vomited from tusked mouths, like that sod’s blood ‘n’ guts spewed all over his curlybeard? D’you know what them acid words are, Krogg?”

“Those are the last words of the players…”

“Well, didn’t that game meet all our expectations, Krogg?”

“Sure did, Ham! We had a starplayer scoring the best goal of her career. I’ve played Blood Bowl as you know, Ham, and I never saw agility and a kick into the mouth cavity like that before. Those tusks won’t fare well if the curlystunt survives, hur hur!”

“Well observed, Krogg. And we had a starplayer slaughtered on the pitch, to boot! What a memorable way to end a long success story in the bloody astrogranite.”

“Oh, that too, Ham! That Minotaur was magnificent. The way he ripped his victim apart by the midsection, held high in the air. You could’ve sworn it was raining!”

“Well, it sure was raining Amazons once the dumb brute started stomping her remains into the ground. Holy hell and bloody havoc! Well, he just couldn’t make it out of that heelpit, Krogg.”

“Not unless the coach hires a Necromancer!”

“Right on! And best of thing of all, that blind referee didn’t blow the whistle even once during seven mortal casualties. Not once, can you believe it? Hahaha!”

“Now there’s a referee I can live with, Ham! Don’t disturb the flow of the game, I say. And don’t mind the bribes. But the fans sure were furious! Those seven fatalities were just during the match itself, mind you.”

“Oh yeah, that referee went down like a Halfling in a Butcher’s cauldron soon as the match ended abruptly. Hell, Krogg! The Amazon fans displayed not a iota of mercy when they stormed the pitch.”

“He was quartered well and truly! But did you see what the enraged Chaos Dwarf fans did to their Bull Centaurs?”

“It was incredible, Ham! Insane! I didn’t know a body can bend like that.”

“Oh, true! That explains how one Bull Centaur player was able to choke on his own rear leg. Who wouldna thunk it?”

“Certainly not the Hobgoblins, Krogg. They had their own fill of troubles!”

“Damn yes! I think Cabal Vision might actually censor what happened to that git who scored last goal in the match, Ham.”

“O-ho-oh, that one was good! By the way, did you catch a look when the fans fed that curlybeard to his own boots?”

“You mean they fed the sod his own boots, Ham?”

“No, the other way around, Krogg! Didna you see it?”

“What? How does that even work, Ham?”

“I don’t know, but the boot sure had bite. Now that’s Chaos for you!”

“Er, right. I for one enjoyed when that gang of fans drove the screaming Hobgoblin straight down into the meatgrinder! I think I’ll avoid hot dogs next game.”

“But do you know what was the best part of the match, Krogg?”

“You know when the stands collapsed? I bet those ticket-paying fans got more violence than they bargained for!”

“Now that’s Blood Bowl for you!” 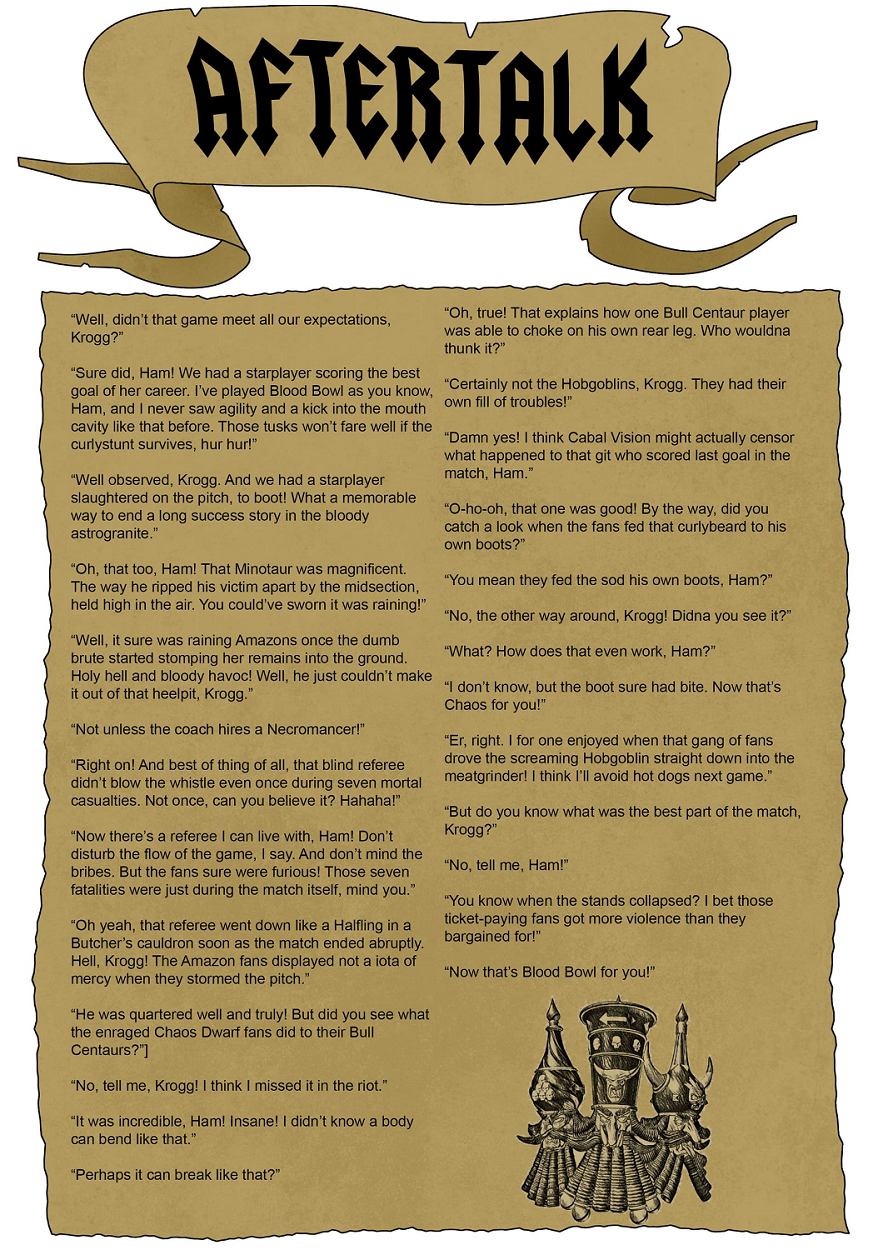 Thanks to @Brawniac for formatting and imagery.

The footprints told it all, like a replay. The pitch had been soaking wet from long rains when the match started, and the surviving grass tufts were now even more rare on the mudfield, emptied now where havoc had reigned scant minutes before. Marks of running feet crisscrossed the mud, detailing the game, in between beer cans and bones. The footprints were smudged over in large, gory craters were Bull Centaurs had fallen and Hobgoblins had been nailed hard under layers of diving opponents. Some had even survived.

The referee had survived, too. Unprotected, exposed, a lone voice of order among chaos upon the arena of death, dodging lethal projectiles and aggressive thugs while the roaring spectators had you completely surrounded in their thousands, each one of them a raving madman with throbbing veins on his forehead. At best. The fans’ surging enthusiasm and wroth depths of dismay were a monster with a life of its own, howling and frothing in bloodthirst. No wonder an honest guy took some tips from wherever he could find them. Extra cash was always welcome, especially if it could pay you to get away from the hellhole that was a Blood Bowl stadium. The referee wondered whether he’d survive the losing team’s wrath. Well, a smart guy didn’t shy away from taking bribes from both directions…

He could still see the half-buried remains of his predecessor in a corner, exposed by a mob brawl. The referee nodded sagely. Aye, the footprints told it all.

The extended cut here is brilliant! This is so much Blood Bowl! Absolutely fantastic!