I was painting up my old metal Bull Centaurs, thinking how nice it was that I could have a full unit of eight different models (the seven regular BC and a conversion of the Blood Bowl star player Hthaark). Then it struck me how unusual this was - most cavalry units in 4th edition only had a champion, standard bearer, and two or three regular models. Why do BCs have six regular and a standard bearer? The lack of a musician was not unusual for medium/heavy cavalry for the time. So I looked at the models more closely. Only one has gloves and he is wielding his axe with both hands, no place for a shield. Big pauldron on his shoulder, unlike the others. Is he meant to be the champion? He has a very mean expression, like he is yelling as he swings his weapon. One other has a great axe in the style of the infantry axemen, also being held in both hands. His larger axe sets him apart from the rest, but his helmet and decoration is rather plain - he doesn’t look like a champion in any other way. The other four are all wielding axes in one hand, with a stub for a shield on the other hand, some with much more elaborate jewellry and helmets. The army list marked them all has having double-handed axes, light armour, and shields; no options at all. 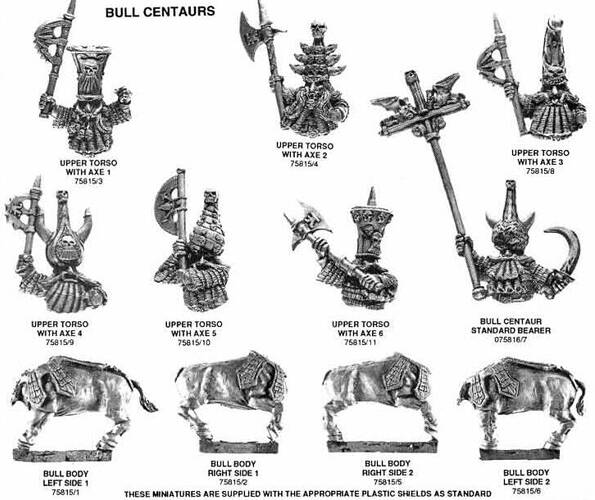 So what is going on here? Why were there so many? Were any of them meant to be champions, or even a BC Lord character? Was the guy with the great axe meant to be an alternative weapon choice for the unit? Were test sculpts just thrown in with the final designs? Were there changes to the army list after sculpting, or did they just not want more different blisterpacks to stock so lumped them all together as generic BCs?

The sculptor Alan Perry might be able to answer some of these, but his general comments on this work makes me doubtful he’d remember. What are your thoughts on this?

Interesting thoughts! I’ve always used numbers 2 or 5 as the Champion when required to do so, but this definitely gets me thinking.

If we look at it from a hat perspective rather than weapon we see variations of 1, 3, and 5 exist among rank and file Chaos Dwarfs already. The horned and spiked tops of 4 and 6 are Champion style hats though, shared with the standard bearer Centaur and one variant of the foot.

For characters, the Sorcerer on Lammasu is a variant of 2, while other characters are either 1/6 or 4.

Based on all that I would place 2 as a Character and 4 as Champion. 6 makes for a good character as well, the aggressive posture paired with more ornate styling on the hat and the spiked top you see on Hthark. Why they were never catalogued as such is anyone’s guess, but if I had to take a shot I would say they never completed a satisfactory separate bull body for them and just decided to release as-is to meet a deadline. I would expect the character in particular to have a more grand bull body to set them apart further from the rest.

I’ve converted #1 into a musician by adding a drum to his waist and a drumstick to his left fist. Not quite finished painting him yet, he has such crazy detail - skulls everywhere and chains through his nose. His hat is big, if not as elaborate as #2.

#4 has a similar hat to one of the infantry champions, which made me think that maybe he was meant to be the champion.