So I started poking around my 4th edition models, trying to get them more organised, when I realised I had a decent 2K army in a single carry case. I keep only metal models in this one box, so there are no greenskins, which leaves it pretty sub-optimal. I also have an extra Earthshaker exceeds the limit of rare, and a ton of extra character models in the box. I’m short a couple of painted metal BCs since I shifted two to a new converted BC unit I am working on (more on that in the future). So my top priority is getting the BCs painted, repairing the few broken bits, and seeing if I can squeeze in my metal bolt throwers somehow. Next step is getting the plastics organised into a similar case so that I might be able to field a more competitive army by just grabbing two cases instead of messing around with so many smaller boxes.

Here’s the rough list based on 6th ed rules that covers almost everything in the box and not much room to add anything else. I didn’t really think much about magic items at the time, but I have 50pts of breathing room to consider them.

I think hobbos are 2pts each in ravening hordes so 1 bolt thrower 30 and 24 hobbos is 78pts. Drop 1 of your 3 dispel scrolls and yeah id prefer that for sure

It looks like the bolt throwers won’t fit into the box, and 24 hobgobs certainly won’t - unless I get creative with adding more than one model to each slot in the foam. I’ve done it with plastics before, but never metal. My HGs are all plastic conversions anyway, so maybe it will work.

Some progress though, three bull centaurs are 80% painted. I only need two to fill out the unit, but when I realised that I could have a full unit of 8 with no repeats (the seven standard torsos and the Blood Bowl star player), I decided to swap out the poorly painted repeat with one I have never painted before. It was the second BC I ever painted, and one of the hardest to paint. He’s going to be relegated to reserve duty - repainting him fills me with dread, and it’s always fun to see how badly I painted back then. My pot of Citadel paint Sunburst Yellow from 1991 is still good, although the lid is starting to crumble so it probably won’t last too much longer.

Great project! I’m not sure you’ll remember me, but I remember you. I stumbled on a painting video recently and it perked my interest again. I moved away from painting minis a long long time ago, because I started doing icons for online blood bowl and…it filled my need for painting.

6th edition was a fantastic ruleset…possibly the pinnacle of Warhammer battling…does anybody still play it? One great thing about Hordes (which was sort of 5.5 edition) is that it was very similar to Warhammer ancients. So you could sort of do a crossover between the 2.

I remember you - I was actually surprised when it said that this was the first time you had posted, so welcome to the Discourse forum!

I think 6th edition was a very solid ruleset, and the only thing I didn’t like was the magic system. 6th ed seemed to prove its worth since they didn’t change the rules all that much for 7th or 8th, so the Chaos Dwarf army list remained playable for a long time. I don’t have any games lined up, but I’d really like to have something ready to go since I don’t get a lot of free time right now. Having something that would work for three different editions is a big plus.

It looks like i won’t have time to complete these properly, so here they are for now as one unit of every different BC model. 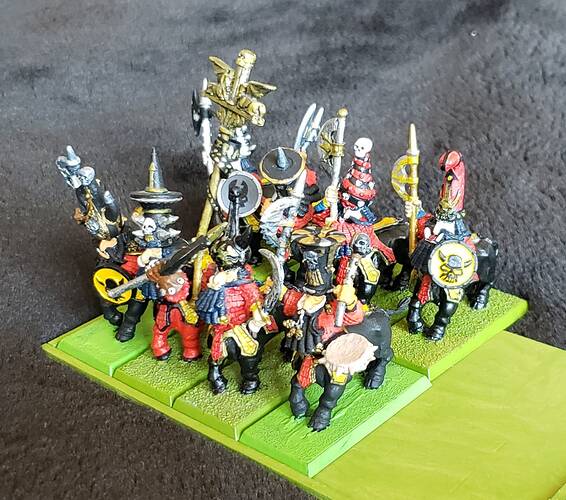