Do you varnish your models? If so what do you use?

I wanted to start an open ended discussion on varnishing models. I have varnished a few models with gloss 20 odd years ago then my prized gorfang rotgut i ruinned with gw satin spray paint.

For myself i have not varnished anything in 10-15yrs or more after ruinning my orc general. Still havent tried to strip it. So ive been running protection free for a long time, wrapping models in bog roll , taking forever to pack up. Some things have still taken a little damage but i am ultra careful outside of collapsing shelves of miniatures

I got a tip about vallejo matt varnish and it doesnt negatively affect the painting finish, no idea how protective it is though. It does smell nice which is a bonus.

1 always used gw one, surely there are better and cheaper
tried army painter twice (3 times cheaper than gw if i recall correctly) the 1st time i got a bad batch and it was slightly dusty, had some white dust being spraied/settkled all over the model.
2 model looks slightly more matte, so depends on the occasions, might be even better!
3 hell yes it does, sustains hits bit better (ofc a dangerous fall it’s the same with and without spray) but especially makes it movable, you can pick up the model without worrying of your lardy fingers to remove the paint!
4 if you paint metal minis just put it in Nitro solvent. that shit is stronger than many friendships. for plastic models i never used real products, BUT everyone in Italy knows that if you dunk a model in a glass full of Chanteclair antigreese spray, man, get an old toothbrush and that ugly ass paint job falls apart like my sanity at work

Generally I am pro varnishing. Especially for metal models. So far I have only used the GW one and had no issues - yet!

It is definitely possible to strip a model after varnishing. That Gorfang is metal, I suppose? Aceton will still take care of it. 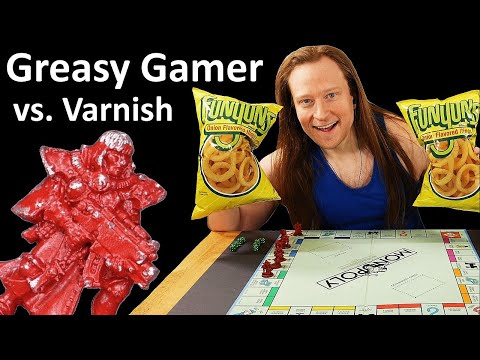 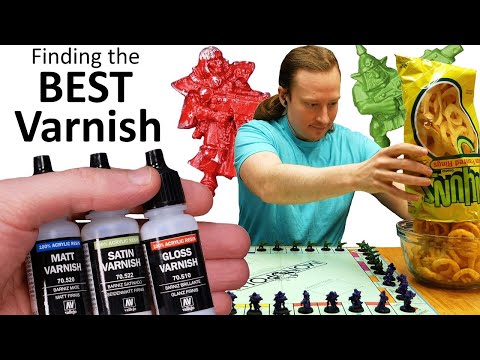 There are actually two kinds of varnishes. One on an acrylic base, the other one on a polyurethane (PU) base. Confusingly, Vallejo sells both kinds labelled as matt varnish, so people sometimes confuse the two.

They generally say on the internets that PU varnishes are better (essentially it adds a resin layer on top) but some tend to yellow over time when exposed to sun light (UV). Acrylic varnishes are more common, I think they are more or less acrylic medium which has some additives to make it more resistant.

I read way too much on this topic as I was looking for a durable and the dullest possible finish. Apparently, many people favour Testors Dullcoat but this is not available in Continental Europe, probably because of nasty chemicals in there / EU regulations.

So far, I have tested Army Painter’s Anti Shine Matt Varnish, an acrylic based varnish. Pretty happy with the finish, works also nice if you apply it with a paint brush. Don’t buy these spray cans, it’s hit or miss, many people complain about frosting. I have the impression that it slightly darkens the model, so better apply it in two thin layers. Due to it’s chemical composition you can most likely use isopropyl alcohol on plastic models (it’s often the primer that causes most issues); acetone and other strong solvents can deal with everything, so no worries on that front either.

The other varnish I have is Vallejo’s PU matt varnish. It’s targeted at people who use an airbrush and many say it’s fantastic at that. I don’t have one, so I used a regular brush and diluted it with a bit of air brush thinner. This was probably not a smart idea because mixing it caused quite a bit of foaming which did not completely disappear when I applied it onto the model (it was an orc, so I didn’t mind it that much). I am also not completely sure if isopropyl alcohol will be as effective here; acetone will probably still work. On the positive side, the PU varnish preserved colours really nicely. It is a bit more on the shiny side for a matt varnish but there is nothing preventing you applying a thin layer of acrylic anti shine varnish on top. I think I need to do more testing with undiluted varnish if this also causes foaming.

Vellejo Matt, through an airbrush but have also applied it with a brush. Provides a solid matt finish and does a decent job protecting the minis. Used it for years without issues.

Same here.
I always use Vallejo varnish and apply it with an airbrush or a brush. Works great.
I use matt, satin and gloss, depending on my mood

I don’t use varnish at all on plastic models. I bundle whole units into a box together and don’t get paint chipping off. I do have the occasional broken weapon or shield, but nothing paint related.

I mainly use gw spray varnish. It works well and doesn’t leave frosty coat as long as u spay thin /light spray. It is mostly used in between coats of say airbrushing so when I hold model while painting the base coats don’t rub off.

Spraying would be so much easier than painting on the varnish, but the risk factor appears to go up that optimum results will not be achieved.

I have 100s needing varnished

I always soak my spray varnish can in hot water for a while before shaking to ensure its all mixed up.

Also leave to dry in a warmish room i.e. not the garage in winter.

Spraying would be so much easier than painting on the varnish, but the risk factor appears to go up that optimum results will not be achieved.

To be fair, my comment was directed at this specific spray varnish from Army Painter. If you can reproduce the external conditions (temperature, humidity, shaking time and technique, phase of the moon, etc.), you could do a test run with some scrap pieces beforehand. I always do that with GW’s white primer – that stuff is hideous.

@JMR @Kawasaki When you guys apply that with a brush do you use a thinner? And did you see the same foaming Anzu talked about?

I never thin my varnish.

I actually have enough faith in the Vallejo varnish that I’m not afraid to put it on sloppily and thick with a brush when I’m in a hurry. It tends to level itself out and dry up fully clear regardless.
I can only recall one time where I’ve been a really filthy hobgoblin and slopped it on so much that I ended up with a bubble on my base. It was still clear though.

One thing that can lead to problems with varnish, is if you apply it before your paint it fully, fully dry.

Owning an airbrush obviously has it’s advantages. For me, not having to deal with spray cans is a big one. I think most of us here have “ruined” finished models with a frosty layer of varnish…

Varnished some metal figs 20 years ago, can pull them out and look this weekend. I’m pretty sure I bought the GW spray. I don’t think I’d use it again and remember it looking glossy.

This distresses me, because i have a massive can of that shit, and no other varnish, and every review and anecdote I’ve heard about it leads me to believe the can is useless

It does seem like most favour this bad boy. Wont be the quickest but seems to be the safest 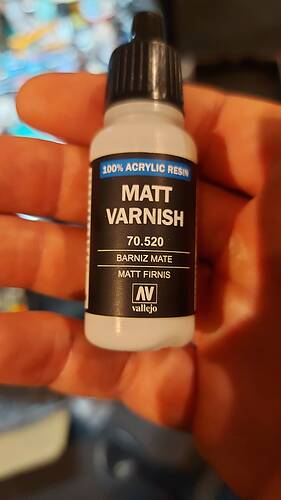 This stuff works fine for me

I’m glad to see this popping up here a lot. I don’t varnish as much as I should, but the vallejo matte and gloss are the ones I’ve researched and had the best luck with in my airbrush.

Vallejo Matt Varnish for me.

@Anzu thanks so much for the breakdown, I accidentally bought the PU Matt Varnish and I haven’t used it yet, always wondered what the difference was but not enough to go find out so that was a great read thank you