Does anyone know these miniatures?

Hello everyone. I am a french miniature collector ( all metal fantasy miniatures ,not only dwarfs or chaos dwarfs)
Recently , i have discovered these miniatures : chaos dwarfs bull centaurs slayer…
They are similar to citadel or marauder slayers but my research on internet have been unsuccessful.
All my prayers to Hashut have been unsuccessful too, but my horns begin to grow and my beard begin to move by itself…
I thank by advance anyone for all news you could give me on these miniatures. 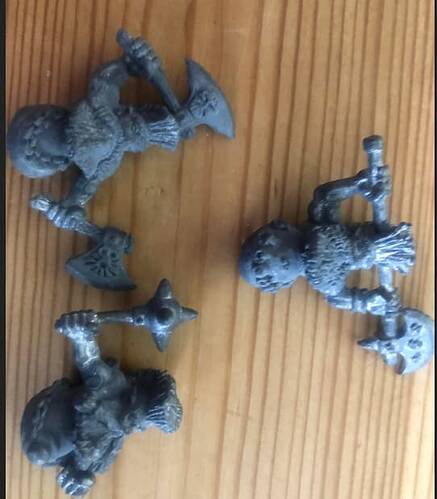 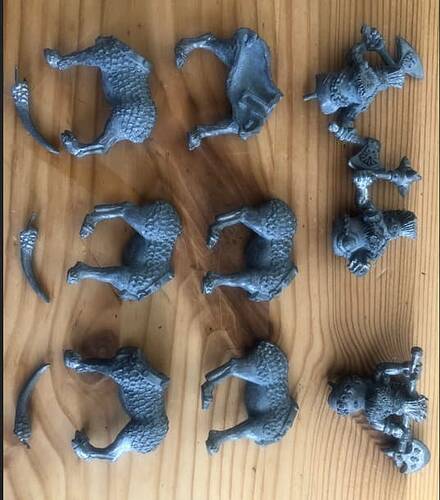 Ive never seen them before but suddenly want them now!
If noone here has seen them before id try the guy that runs Stunties.com. if anyone knows it will probably be him. He catalogs all known dwarfs

Thanks for the stunties link. I knew this site but didn’t think to it. “slayer” , “bull” don’t give anything on the stunties site. These improbable bullcentaurs slayers remain mysterious…

I know a lot of different models and miniatures manufacturers, especially the old manufactories which produce metal models, but I have not seen these yet. But as Zodd already noted … these models I would also like to call my own. Where did you get them?

hello , i don’t own them. Someone tries to identify them on this site : https://www.reddit.com/r/lostminiswiki/comments/v8f9ki/id_request_some_kind_of_dwarf_troll_slayers_bull/

Wild! Never seen anything like them before. You could try asking here as well

This is a wargames miniatures trading group specialising in out-of-production miniatures. We welcome members who would like to learn more about the items in their collection before they sell.

Hello. i don’t use facebook , i am quite “out of touch” with some aspects of internet^^. But if you want to search by your side , feel free to do it. Thanks for your interest.

They look like chaos hounds or demon dog bodies to me.not bulls anyway

It is true , they have claws and not hooves (hoofs?) but when i saw them , i couldn’t think to anything else than bullcentaur^^. i sent a message too to bokigromdal of stunties.

They look a bit like the old flesh hounds, which had separate heads and studded collars like that.

Dont think Ive ever seen them…

hello , they are unknown on the stunties site.

Is there any chance you could take clearer pictures of the tail joins? They don’t look like anything I’ve seen from a professional model company, but the dwarf bodies look very much like GW Slayers.

Is there a chance they’re an amateur recast of someone’s conversions?

Hello. Like i have said upper , i don’t have these miniatures, you can join the owner on Lostminiswiki. I have never seen elsewhere this way of making a slot for tail ( and head) when the parts of the body are assembled ( and surely not in GW). There are amateur or custom re-casters (not sure of the word^^) . If it is the case , he (or she) is very good.

I’m leaning towards this being a custom sculpt by a hobbyist. The tail and torso slots and deep pins on the matching parts are unique and rule out most conversions. Additionally, those upper torsos are not GW slayer torsos from any edition, or any other brand I can find - the posing and weapons don’t match. The beards are different as well.

It’s a real shame the tabs are missing, if they ever existed.

This is definitely not the work of an amateur but at least a semi-professional and intended for commercial sale imo, at least if done from scratch. Most amateurs would probably go for a two-part sculpt (slayer and ‘bull’) to avoid sculpting the two parts of the ‘bull’ body separately which can be very tricky and hard to match. They instead went for a hollow two-part sculpt which saves metal but more importantly weight but also increases the casting complexity. They also added a very sophisticated socket and pin joint. This would not be something someone would do if this was intended for niche or personal use. An advanced hobbyist would have simply drilled and pinned the bodies together.

However, I don’t want to rule DIY casting out altogether. If this is a conversion of an existing miniature, I would expect to see the same socket and pin joint somewhere. The metal very likely is a high lead-content alloy (judging from the oxidation and hue), typical for 80s Citadel minis but also popular for home-cast miniatures (think Prince August) and other manufacturers in the 80s and and 90s due to its nice flowing characteristics and low melting point. Where slayers around in the 80s? Citadel used the same metal for prototypes and series production judging from the models on the stunties website.

My personal guess is that those are prototypes by some non-Citadel studio that never went into full production or the private work of an experienced sculptor.

Thanks for your answer. I agree totally with your conclusion.
With a little of luck , this skilled maker will recognize his ( or her) work and say us hello^^.