Fantasy rules for shator The executioner

Im looking for some fantasy rules for shator The executioner Can any one point me in The right direction ? 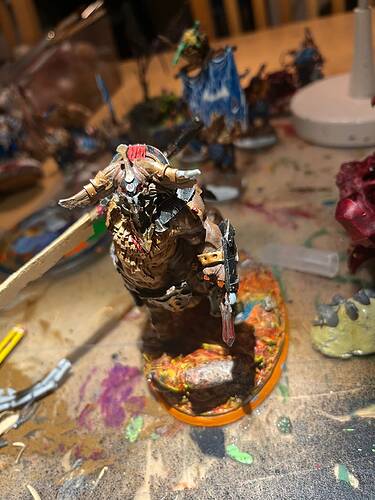 From the forgeworld website, I don’t know anything about AoS editions though 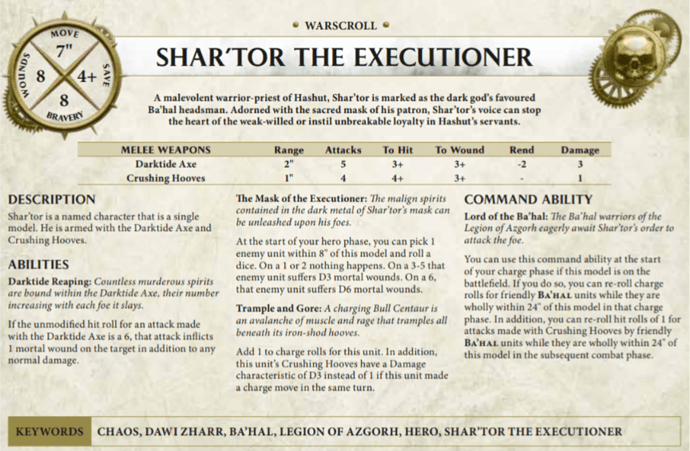 You can kind of rearrange the AoS rules into WHFB rules

Or you could take the Taur’ruk rules and boost them up in the same way as you would for any hero to lord level character, then adjust for a special character.

I’d recommend the same. WAP is based on 8th but makes very flavourful rules in detail. If by “Fantasy” you mean 8th, just take from WAP whatever you like.
For 6th/7th/WCE it would be more difficult.

The only official rules that have ever been released are Age of Sigmar ones. AoS came out in 2015. Shar’tor was announced, I believe, at the start of May, 2016, when it was announced that it would be exclusively available at Warhammer Fest 2016 (May 14th-15th) and would then be on the webstore soon after.

The Tamurkhan: The Throne of Chaos campaign book was released in 2011 and therein the beefiest Bull Centaur was the Bull Centaur Taur’ruk, which had the following stats:

So with this in mind I think cornixt’s suggested booseted Taur’ruk stats is very reasonable.

Not sure I’ve contributed anything useful here, aside from a historic timeline noting that oldhammer rules were never released