So I discovered Flintloque, a 28mm Napoleonic-Fantasy skirmish game, by stumbling over Alternative Armies’ very nice miniatures. Being a lover of all things Napoleonic, I was immediately intrigued by its style, so I got me a rulebook and had a look at it. I haven’t gotten very deep into the lore yet and never played a game, so this post does not endeavour to offer any kind of comprehensive overview; the aim is mainly to call attention to the game and perhaps get some thoughts from those who may have already given it a try.

The setting can be summarised very briefly as a classic fantasy world that has gone full Napoleonic after the invention of gunpowder. One thing I like very much is that it does not take itself seriously at all, thoroughly embracing its nature as a parody of both history and fantasy. Reading through the lore sections and snippets provided some good chuckles. The rules, too, reflect this tongue-in-cheek approach: The game is all about fun-based narrative play, with balance being an option but not a requirement. There is a point system for warband creation, which does not only offer upgrades for individual characters (e.g. a bullet-proof beard), but also the option to give them flaws so you can deduct points from their cost (e.g. a beard that is actually too long for its owner, hindering his movement and reducing his accuracy).

The factions in the setting mirror the nations of Europe during the Napoleonic Wars. There are, for example, the Ferach Empire (French High Elves):

The Undead of the Witchlands (Russian Undead): The rulebook also encourages players to come up with their very own comic opera states, such as existed during the era on the territories of the former HRE. And while Alternative Armies does not (yet?) have a range of dedicated “evil” dwarves, there is this highly intriguing snippet in one of their books (Bier & Bones Rulebook, p.41):

There’s potential for our beloved evil stunties here, for sure!

Have any of you ever played Flintloque? I would very much like to hear of your experiences with the game system.

The city of these evil dwarfs is probably Stuttgart, a city known for its association with automobiles. Gives us an outlet for some tech. Would need to consult my book on uniforms of the Napoleonic Wars to see what the colour scheme would be.

It would be hard to find a more miserable city than Stoutgart which while being a very large city ever fails to prosper.

I live there. Can confirm.

I just took a look at the website for Alternate Armies - the minis for the Black Horde Dwarfs would definitely work. Like the historical Brunswick forces of the Napoleonic Wars their shakos and busbies had a big skull and crossbones which I’m sure could be changed to bearded skulls.

Wonder how to make an army based off the British forces in N. America for the War of 1812, including First Nation allies. I see they have rules to do homebrew…

The city of these evil dwarfs is probably Stuttgart

In that case, Württemberg uniforms would be the most historically appropriate template. And, I mean, this fold-down bayonet might well be some crazy dwarf engineer’s idea

They had some really nice uniforms, mainly blue and green as far as I have found.

An interesting update from the Stoutgart perspective:

Two days ago, Alternative Armies has released a new set of miniatures representing the Ferach Empire’s Legion de Nain, i.e. dwarves recruited from the many tiny states of the Finklestein Confederation - of which the slave-keeping dwarves of Stoutgart are also members. 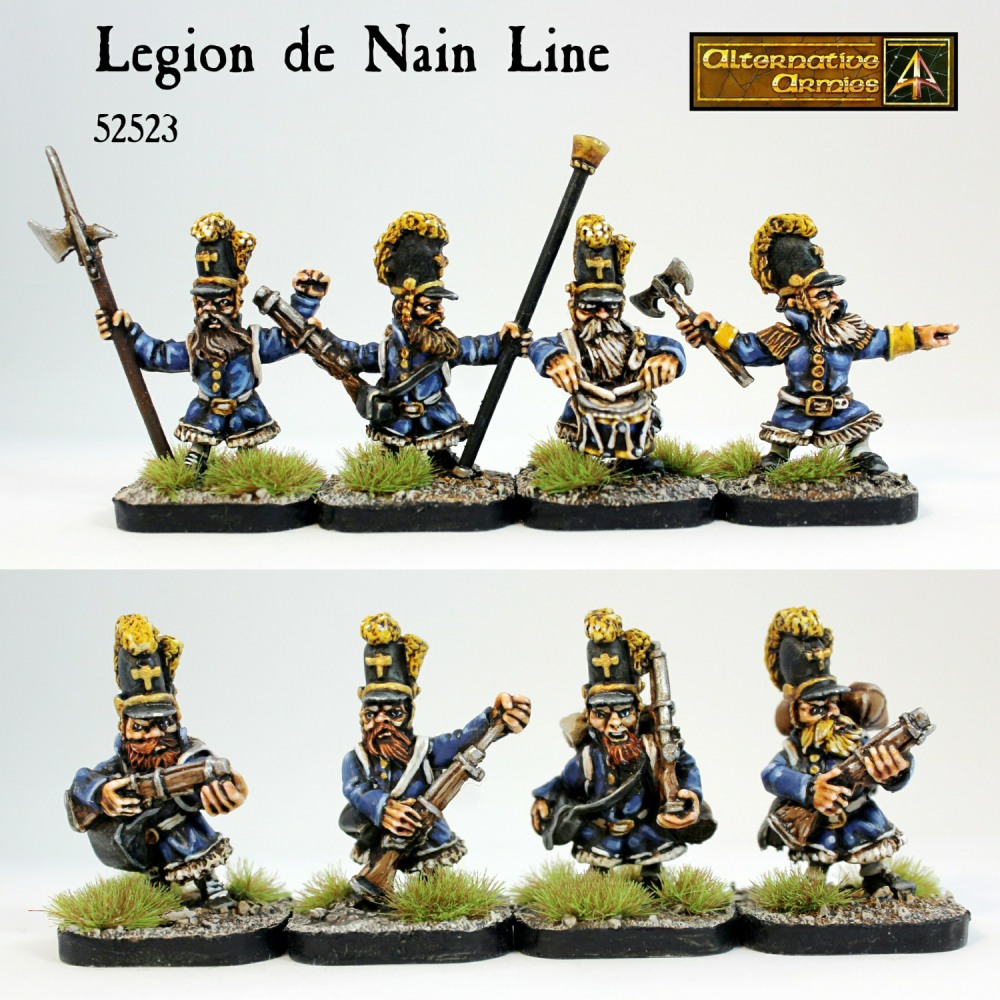 (Funnily enough, these were published the very next day after I had ordered a pack of the old Finklestein dwarves!

More Legion de Nain releases have been promised to arrive over the course of the next months. Also, there’s a Campaign Book in the making to cover the Monich Bier War, in which Stoutgart participated as an ally of Beervaria; so there is reason to hope that their lore might get some elaboration!