@nrmpaint on Instagram. I saw this, pretty amazing imo. The first time ive ever seen someone represent Hashut in model

Well he looks like hes just come out of a lava hot tub so maybe he didnt want to mess up his colossal hat.

A chaos dwarf in comparison next to “Hashut” would have been nice. Unfortunately, I can not really imagine the size of the model.

Otherwise nice model - I imagine a Hashut but already different …

It could be a good statue.
Of Hashut. Maybe a golem. But a god? There is a reason why when you create a monster looking as one would imagine one of the chaos gods, you obviously recognize a greater daemon in it, not the entity itself.
But as far as we see, Hashut has no greater daemons beneath him.

i talked to the guy directly, he asked a sculptor (i walked to him as well) for the rapresentation of this artwork going around for the last few years 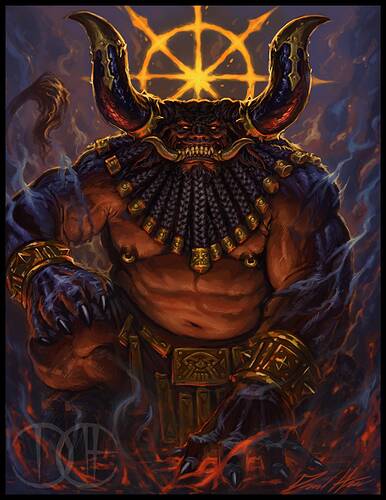 the model itself it’s a 1 piece only, doesnt exist anywhere else.
i talked to the sculptor to see how much would he charge for make another one of this, a 3d file one.
1k euro it’s the price he asked for, so i had to pass on that xD

but the temptation is in the back of my head every day since!

So the 3D model exists but is not his and he would have to redo it, or what is the issue?