For various reasons, I’ve been putting off the creation do my hobby blog. Starting is the hardest part of commitment, as some dude who’s name I forgot said, and thus I need to post what I have so far. Note that, since my whole family are now interested in wargaming miniatures, much of my time has been preoccupied with Stormcast Eternals, Kruleboyz, and unicorns.

But not here! Here, I present my burgeoning army of all dwarves abyssal, chaotic, dastardly, evil, infernal, and other shades of not-so-nice. I’ll begin with my first shipment of Russian Alternative minis, about which I’ve been greatly excited. 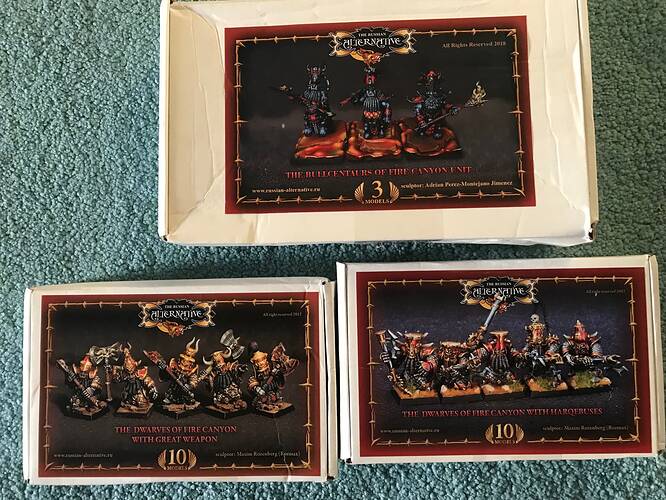 As you can see, these are my first shipments of bull centaurs, blunderbusses, and great weapon wielders. I absolutely L-O-V-O the visual aesthetic of these fellows; I’ll dare to say that I think they’re an improvement over the original 4th edition versions which I was drawn to back in the mid-1990s when I discovered Warhammer. In particular, I like the fact that some of the hats have masks connected to them - both stylish and practical!

I’ll need to get bases for these fellows before I can move forward, and that’s another item still on my to-do list. My son is excited to work on these with me too, so hopefully I’ll get those bases and put these together sooner rather than later.

Just to add one more piece of work: my son and I assembled the Windmaster Miniature’s mortar cannon for their Underworld Dwarves. 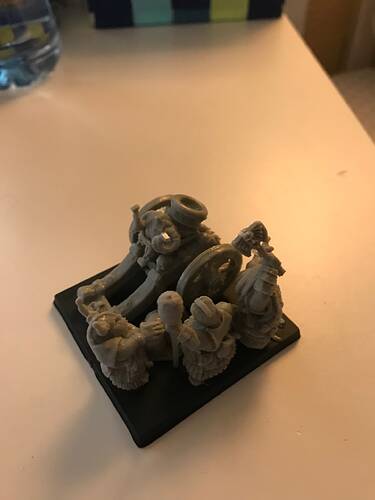 In retrospect, I don’t think we chose a wise layout for the models. We guessed that by placing the cannon on one side, we could increase the amount of space for the three models and the pile of projectiles. However, had we placed the cannon in the middle of the base, we may have been better off. 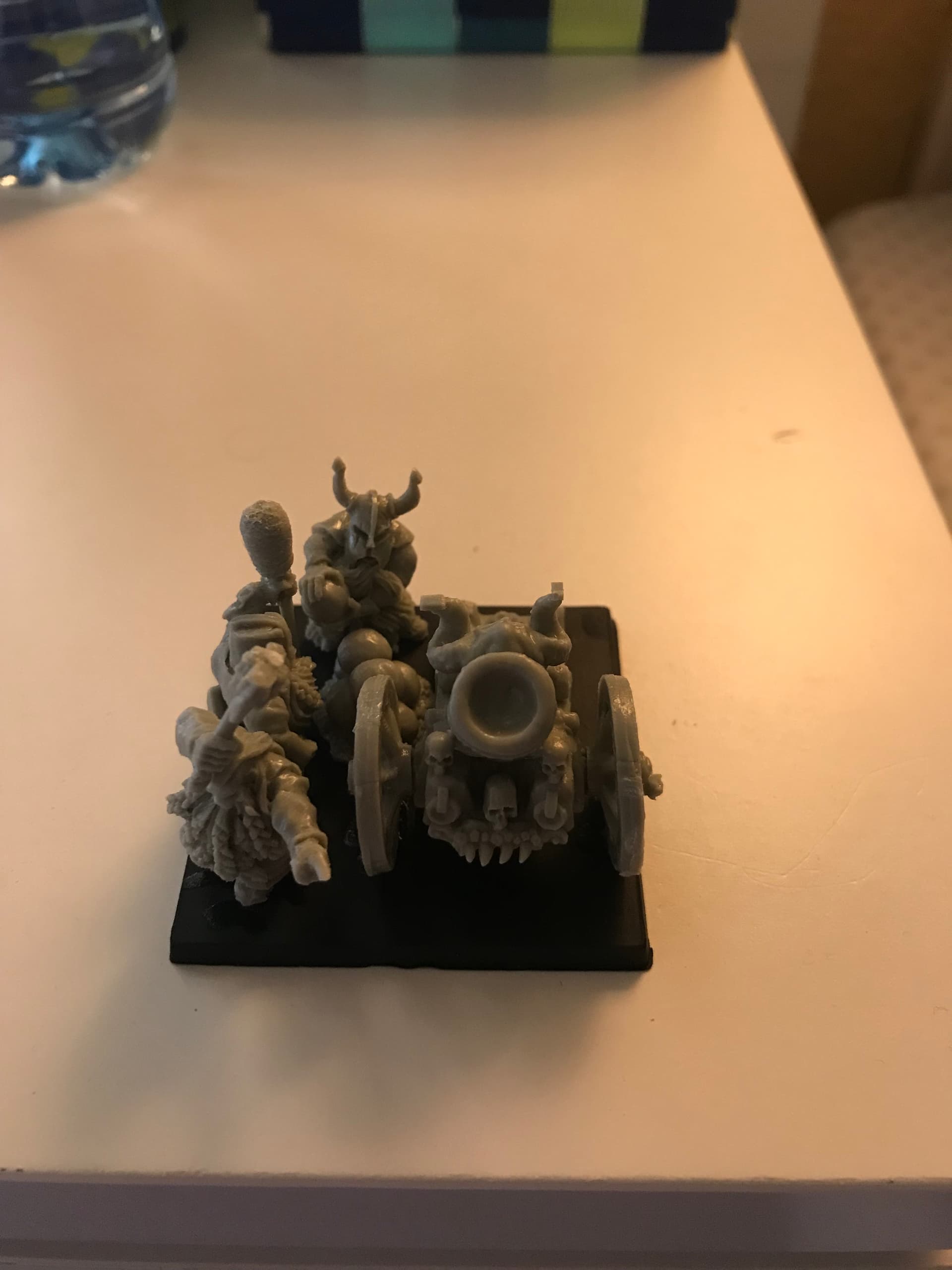 Another mistake we have have made was in assembling such a model before painting it. My son is a better painter than me, but even so, this will be a tough job. For others who have this model, I’d recommend priming and painting before assembling.

One thing to note about the models themselves is that they’re quite small. Compared to my Blood Bowl team models, they’re miniscule. Perhaps that can be explained away as the crewmen being smaller individuals and the infantry are big swoll guys. That is reflected in 8th edition stat differences between the infantry and crewmen, after all.

I am not opposed to evil Unicorns,
Even “Good” ones have their uses.
IE “You told me you were a Virgin!” But the unicorn says Nope.

As to the Dwarf Mortar. Of course the silly goody two shoes Dwarfs would get it wrong.

Anyway. Welcome and we’ll all look forward to seeing your stuff.

I’m back! Before I even got my BATG count up, I couldn’t resist opening up a box and putting something together. Behold, my son and I’s attempt to assemble the Lost Kingdom Infernal Dwarf lord on a Great Taurus! 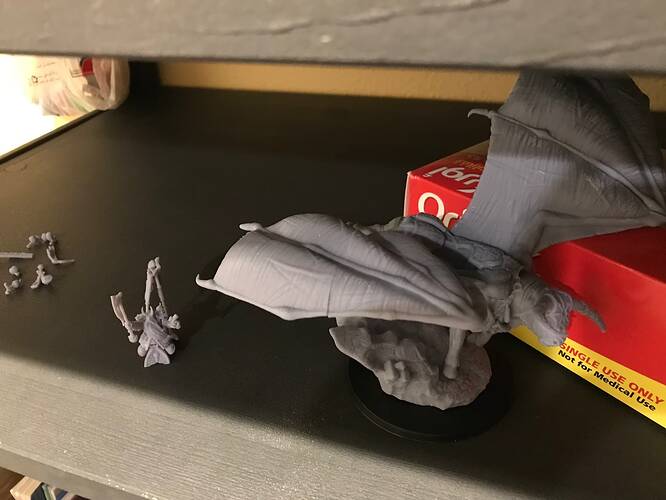 The overlord himself was simple to handle. The two flagpoles are a bit uneven, likely due to being left unassembled for so long - a warning to those who allow their models to collect dust! 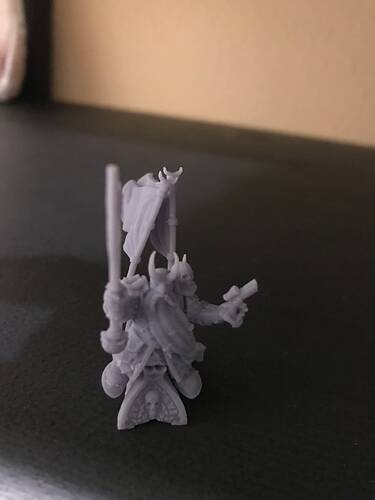 The details on that grouchy old fellow are incredible. My phone isn’t powerful enough to capture a closeup image, but I can even see the creases in his nose as he sneers at the world. It’s awesome.

There was one mishap which involves my son’s friends handling the Great Taurus without my permission: 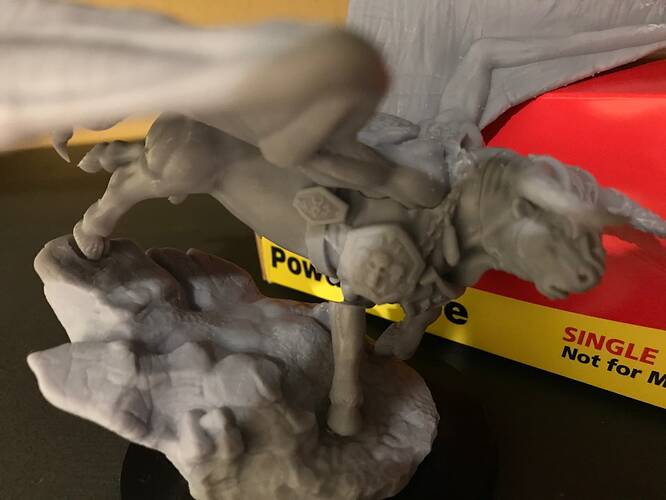 This model is sturdy; I need to clarify that after showing this image. The Taurus lost a leg, the only leg which came as a separate piece, when one of the neighborhood youths dropped the model. The fact that nothing else snapped off is a minor miracle. Because of the damage at the base of the right foreleg, I had to change the mini’s pose and jury rig the leg like that. I’ll try to use green stuff and strategic kitbashing with extra bits to make it look natural, but this is another warning to those whose children have friends uninitiated to the world of war gaming miniatures.

The same friend is now in possession of my only Russian Alternative chorf infantry, too…though that’s a bitter story of tragedy for another time.

You should be able to straighten the banner poles using really hot water. Use a kettle.

Kids are the bane of precious delicate models. I had 20 odd painted cds in my dirty paint water pot and about 40 more thrown in various boxes. I was gutted, trying to get over it. The bright side is yours isn’t painted yet so less emotional attachment lol!

The beast looks massive. Look forward to seeing it painted

This just in: you can only order a maximum of two, so I ordered two! 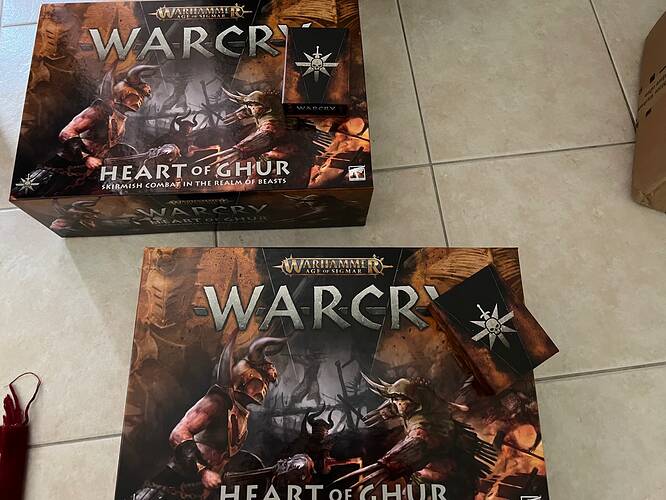 I’m considering the Horns of Hashut as a stand-in for hobgoblin warriors in WAP…the issue is the lack of shields. Animosity can be explained thematically, but the saving throw for carrying a shield being assigned to a unit in light armor feels like cheating.

I could just use t9a and make them vassals, but I’m keener on something more widely accepted like WAP. Not sure if I could fit them in using RH or not.

Shields/ no shields, no one gives a fck in fantasy man. Model a few shields on the front rank if it bothers you. Mixed weapons are what you say they are.

You could get some 3d prints of bucklers, or just print regular shields small. Easier to throw on an arm that wasn’t necessarily designed for it. I don’t remember the sculpts exactly but you could also toss shields on their backs.