Introducing the hardline according to Jasko

So my name is Justus, but if you know me it’s probably as Jasko. A teacher once couldn’t read my name and was like “Jasko? Who is Jasko?” and that stuck. Was the one and only cool thing she ever did.
I was born in Cologne, Germany in 1983, which I guess makes me one of the older people here. I studied Biology in Cologne, made my PhD in genetics and spent 10 years in obesity and cancer research. But either you really hit it off and become a professor, or you leave research sooner or later. And since I didn’t have the stomach anymore (research is by nature frustrating over long periods) I decided to leave it. Currently I work at the university where we are overhauling the basic biology study course.

When I visited my best friend from Kindergarten around the mid-90’s, he had some plastic WHFB Orks and I had to know what those were. We spent some time looking through the Orks army book (I think) and I quite quickly decided I wanted to join the fun. I decided to play Dwarfs, which of course made sense opposing his Orks. Luckily Cologne had a GW (oldest one in Germany, btw) so I went there. I can still recall the emotions. I got the Dwarfs army book and devoured it. Upcoming Christmas I got the newly released 5th edition game box, the one with the Lizardmen and Bretonnians, and some Dwarfs.

Maybe a year or two later we had to build something in school for arts & crafts. I brought my Dwarf army book, since I wanted to build a forge like this one 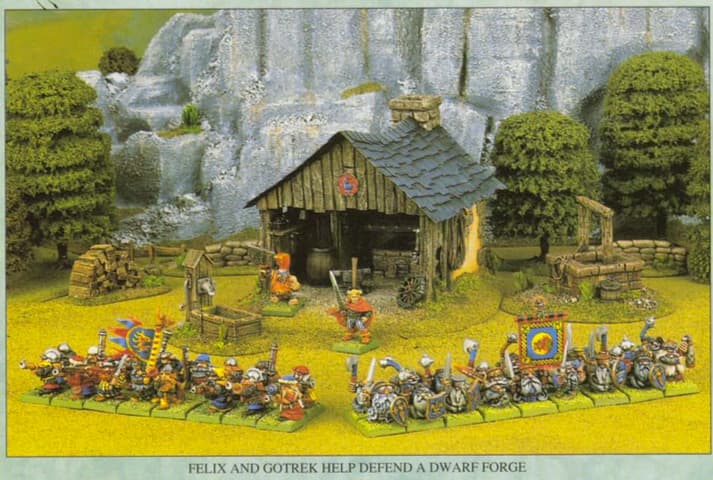 Bildschirmfoto 2022-02-01 um 13.22.49713×480 62.9 KB
It didn’t even turn out tooo bad, just the scale was wrong. But some of my mates (who were all building basically landscapes for their Army Men which they were in to) did have a look at my army book and were immediately hooked. They all got armies, later we all also jumped into 40k, and it went on like this for some very happy years. At the end of the 90’s, with the introduction of girls, drugs and this little thing called internet, it all ebbed away a little.

Jumping forward to 2010’ish or so. At a friends party a mutual friend I hadn’t seen in ages told me “guess what I started up with again - Warhammer! Do you still play? Wanna?” I didn’t but I wanted to! So I dug out my models and went over and we played some games, mostly 40k. Gradually I moved back into the whole scene, got the 40k Dark Vengeance box (I play Dark Angels, so…) but most importantly, browsed the Games Workshop homepage during a particularly slow day at work. And my co-worker saw it and, long story short, is now my main (and only) gaming buddy for the last years.

When I left the hobby for my hiatus, I had a nice Dwarf army and the roots of High Elves and Night Goblins armies. When I came back, now with significantly more disposable cash than as a teenager, first thing I did was completing those armies. GW had made quite the leap model-wise in that decade. My buddy also expanded his armies and it was great fun to not always have to play the same armies. At one point I thought I could use another army but wasn’t sure which. Then I remembered the Legion of Azgorh! After a short deliberations I made some plans which models and units I wanted and finally got the army. Around that time (2018) I also joined CDO.

I was moderately active in the old forum, but my engagement had dwindled down a bit just when the community made the move to the new forum (and eventually discord). What a perfect storm! I have to say, over my long life I have been part of a few communities, both hobby-related and now, but nothing comes close to this ragtag bunch of awesomeness! These days I think I am more invested in the hobby than ever before, and it’s in large parts due to all of you.

I didn’t have the stomach anymore

You left obesity research because you didn’t have the stomach? There’s a joke in there somewhere …

Haha, well unfortunately I very much do have “a” stomach, maybe I just couldn’t take the constant reminder of how bad that actually is

I guess these days id be considered a virologist.

Need to form a focus group for the over 40s gamer…the boys that never grew up!

I started warhammer age 11, what age did you start?

Nice! I find the scientist/wargamer overlap larger than expected…

So I cannot pinpoint exactly when I started, but I would guess 1996, since 5th edition came out that year and I started with that boxed set, and I was already gaming for a while when the new High Elves army book came out in 1997. That would mean I was 12/13 when I started, which sounds about right.