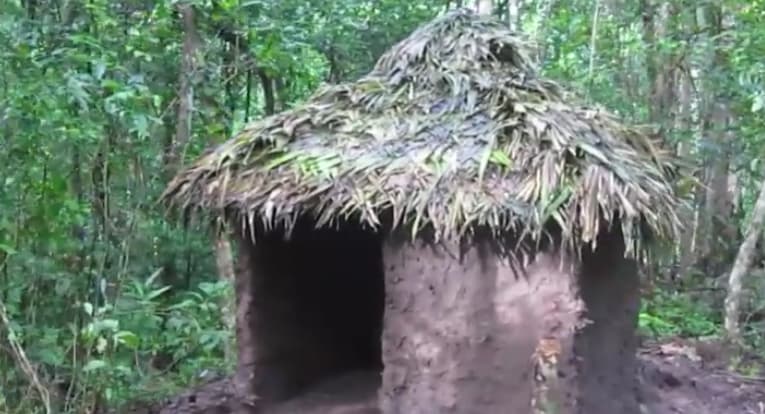 Hello, I have been a lurker on the discord (and discourse) and have finally decided to contribute something to this here society of yours.

I’m posting here first for feedback and potential suggestions before I go ahead. If I succeed, there will of course (I hope) be another series of posts detailing the small victories and units I get through before a potential grand reveal.

But Grug? I hear you ask. You’ve written three long sentences and haven’t even stated what your project is.
Shut up loser.

One of the main issues I have with Warhammer and wargaming in general is the amount of space it takes up. 2000 points of chorfs, though sweet as hell, isn’t gonna fly from where I’m sitting. As well as this, I live in Wellington, and there sure aren’t a whole lot of fantasy players to reach out to. Luckily, Kiwi ingenuity and 3d printing has led me to a solution which will save on space, get me a sweet chorf army, and make the game more approachable to my friends.

MY PROJECT:
Minihammer. Not impressed are you? “Why don’t you just play warmaster?” you say? Well, I want to play fantasy rules, just with a smaller footprint.
And I have a clever idea…
Now I suck at math, but in theory, by downscaling 28mm models to 11.2mm (around 40%), you should end up with “metric models” right? By this I mean you just have to convert 28mm wargame imperial measurements to metric and you can play like normal. Likewise, epic stls can probably be scaled up around 180% (186%?) for the same effect. Plus 11.2mm scale seems like a good scale where it’s small enough, but not too small. Please tell me if this math is wrong and I’m stupid. I for one was one of those kids who enjoyed poetry in school instead of numbers. No I wasn’t bullied, why?

Now let’s get away from the dumb NERD stuff and get into the cool GEEK stuff. Here are the models I plan to scale for my Chorf army!

Up first is the infernal guard. I’ll be modeling the army on the Tamurkhan book because I like them alot. I can’t remember where these files were from, but you’re a saint. 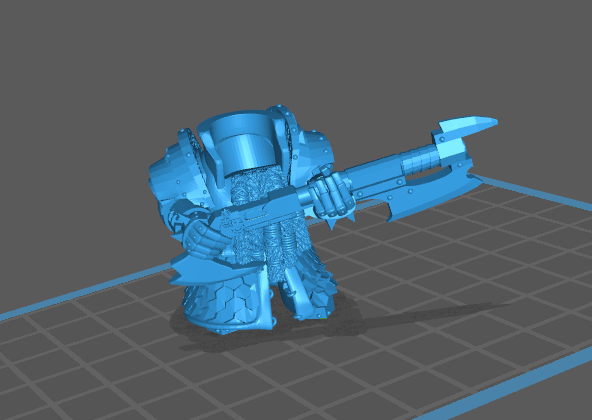 Next would be a couple of mighty magma cannons. Maybe even three? 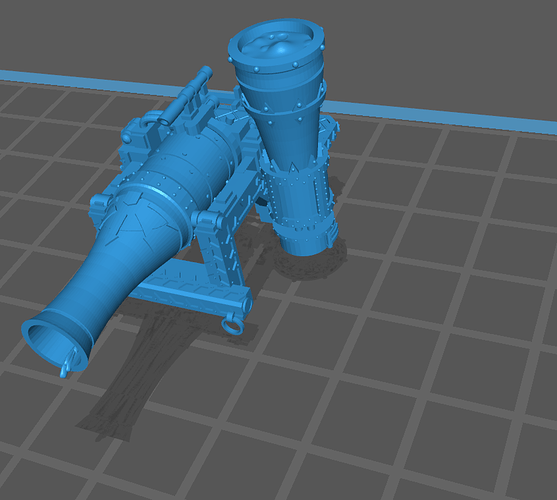 And I was wanting to do an Iron Daemon. But this doesn’t look like it’ll be fun to scale down… If there’s a full model of the Iron Daemon that’s in 1-3 files, I’m all ears. 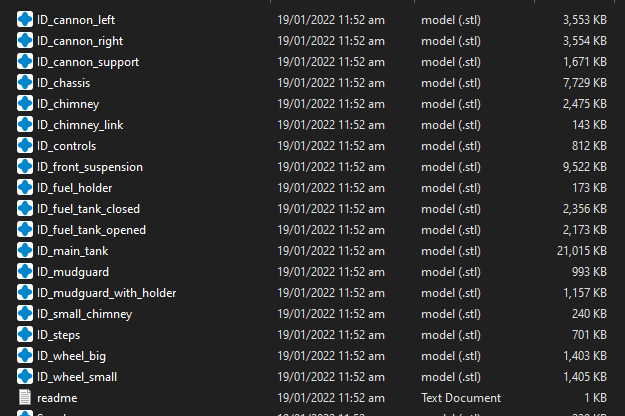 Oh, also some Hobgoblins and “Deathguard” from LKM. 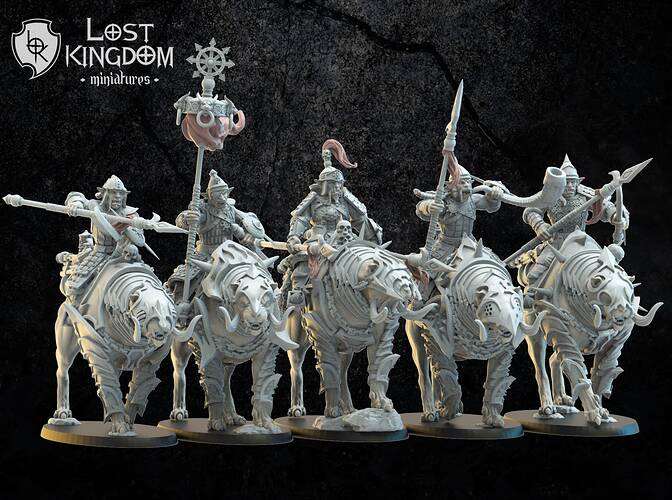 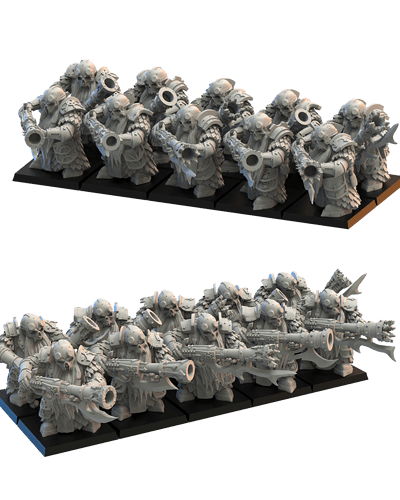 And on the enemy team, I was planning on maybe doing Nuln Imperials. This way I think it’ll turn out like a small box set.

That’s my thinking laid out for this project. If anything looks horribly off or wrong, please tell me.
I hope to milk a few posts out of this one. Additionally I’ll also be attempting on doing 40k like this as well. Hopefully going to do minihammer Leagues of Votann, Tau Empire and Tyranids. All of which I’ll be working on simultaneously and also posting alongside the main attraction. My main goal with this is to make larger wargames more accessible to people like me who happen to have a 3d printer and not a lot of space.
I will disclaim that I will make mistakes, and there are likely a few I didn’t pick up on in this post. Hopefully this trial and error series will be of use/inspiration to some people.

Plus smaller minis look cooler in my opinion.

I’ll be modeling the army on the Tamurkhan book because I like them alot. I can’t remember where these files were from, but you’re a saint.

Oh man, if you remember where these originated let me know

I’m looking to print up some models that match my Tamurkhan ones thematically. Plus, having the ability to print up large statue pieces, and warmachine parts as mechanical building parts is a nice bonus!

Can’t wait to see how the mini-minis turn out. I went a little extreme with my 10 mM HeroQuest game, but somewhere in between would probably be ideal! Keep us posted
~N

This sounds like a fantastic project, I love everything about this idea and am now waiting with baited breath for more updates

Oh man, if you remember where these originated let me know

Not sure if it is the same but I linked one I stumbles about earlier in the collecting thread:

Here is a one-part magma cannon, as people in @MudHutGrug 's minihammer thread were asking for one:

Oh, also some Hobgoblins and “Deathguard” from LKM.

About those hobgoblins in scaled down… They are very true-scaly with their human-sized heads, not even very goblin-like, mainly mongols on fantasy beasts. (These are two separate reasons.)
Scaled down you won’t recognize them as greenskins at all.
Maybe something like this would work better? 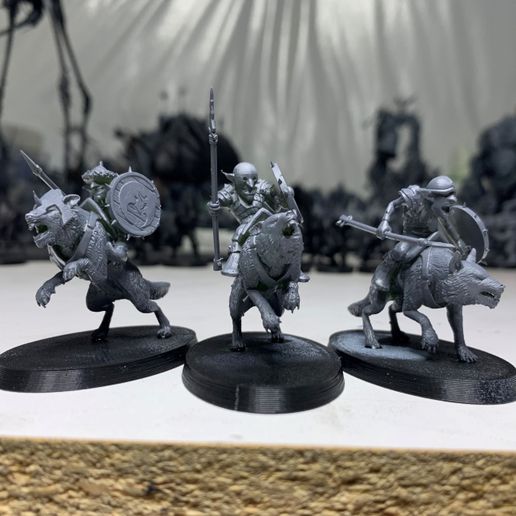 About the scale: Going from inch to cm will work, but for the scale of the models I’d take something established, either 15 mm (for compatibility with Warmaster, IIRC) or 10 cm (which is frequently seen for minihammer).

Most game systems that are close to GW originals are probably still to cumbersome for the small scale but at least about Kings of War I read that it works well scaled down.
Not sure how much Warmaster differs from WHF, unfortunately never played it, but people say it is one of the better ones.