This was a thread I started on the CD discord, but I thought it be fun to move it here: a discussion on why CD hats look the way they do.

Realistically: the big hats on cd minis were very varied in size, shape and decoration. So, it was probably like Scottish clan tartans. Each clan had similarities, but each household adding their own embellishments. Ex. This clan has the round pillbox hat, but household A adds 1 spike, household b adds 3 spikes (based on their Patriarch is the Third son).

Ex. In clan zharak, a minor lord won an impressive battle and was rewarded a special unique hat, like a chain of office, in rewards. All of their descendants have a hat that emulate that hat’s style

I suspect the style changes with the centuries; thus, you can trace back the age of your house based on its general shape

Another example: the tall hook hats were given out during the Goblin rebellion (when hobgoblins first allied with CDs officially) 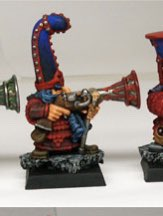 MASKS
The hat = clan idea also works with the infernal guard too; They are stripped of their names, their clan, and their face. And thus, also their hats

Mask dwarves might be lesser dwarves / bastards who have no great clan; or had their names stricken do to dishonor / disownment

Some wear it with shame. Some are openly proud of it, glad to distance themselves from old, lazy houses (i.e. “I’m gonna build my OWN clan! With black Jack! And hookers!” )

They are stripped of their names, their clan, and their face. And thus, also their hats