I have a couple warriors with missing hat pieces I think if I had a small skull to put atop it would work and match, have a couple standards that are also broken and missing the poles. What can I do with them? I’m not great at the improvising.

If you have any spare spear or halberd bits, those could make pretty cool standard poles. Busted standard itself just needs a bit of drilling and knife work to make it look battle damaged.

Unfortunately I have zero to no bits as I traded or tossed all things like that years and years ago. Only bits I have left is from my tau. Did anyone have a blog where they converted damaged models? I’m thinking about clipping the rest of the banner and making it like he’s a lefty

When replacing banner poles or spear shafts I use metal wire. My main go to is a 1,5 mm that is aimed at gardening. It’s posable but thick enough to withstand stress and not bend immediately, it’s a bit thin compared to the original GW ones though… but when converting plastic monopose warriors this means you can drill into the lower part of the original shaft and just replace the part above the hand quite easily.

Just drill into/through the hand at least 3mm for stability, and do the same to the old/new banner top.

If you live near a hobby shop that sells model trains or things of that nature, you could go in and ask if they sell ‘Evergreen Polystyrene’

Evergreen makes polystyrene strips in a ton of different shapes and thicknesses. You could take the model with the banner poll with you and compare diameters to what they have available.

For the hat-toppers you could buy some plastic strips that are the right diameter and make spikes by filing the ends of the strips to a point, then clipping the spike off the end of the strip. Since they are styrene, they will glue on with model glue, no pinning necessary.

Or, instead of all of that, you could use wire cutters to cut up a large paper clip, and use that for the banner pole shaft. Also, you could use left-over sprues and try to file some of the runners them into spike shapes to glue to the hat tops.

I think if you can find 28mm skulls, those would be you best bet for the hat toppers.

EDIT: some examples of possibilities: 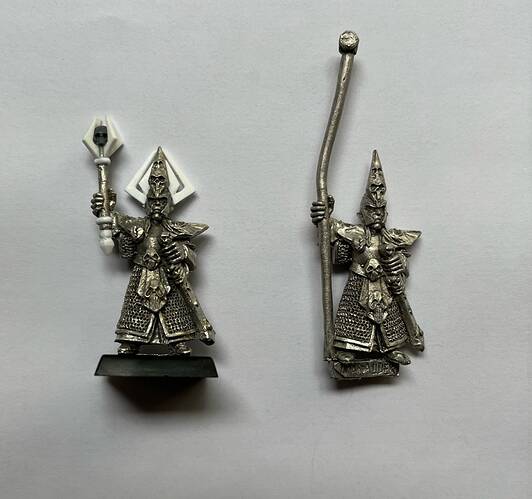 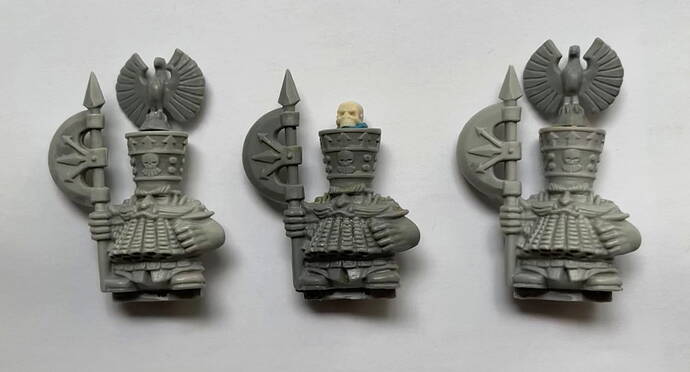 I intentionally clipped off the point on half of my plastic warriors to add some variety, just filed the top smooth.

I’ve used styrene tubes for banner poles. The inside of an empty ballpoint pen ink tube is about the right thickness, but you need a good primer or sand it all over - paint won’t stick to it easily. Other Warhammer players should have spares banner poles anyway, Goblins used to come with three per box, Orc spears work too.

You could always home-cast something else in your collection and make parts out of green stuff. Oyumaru or any such equivalent (blue stuff etc) can make you a reasonable push mould and is reuseable.

What! I’m totally going to that as well

Some slightly shonky examples there (including a fully push moulded Bull Centaur/Musician mashup). I think I could have done a lot better if I was more invested in it 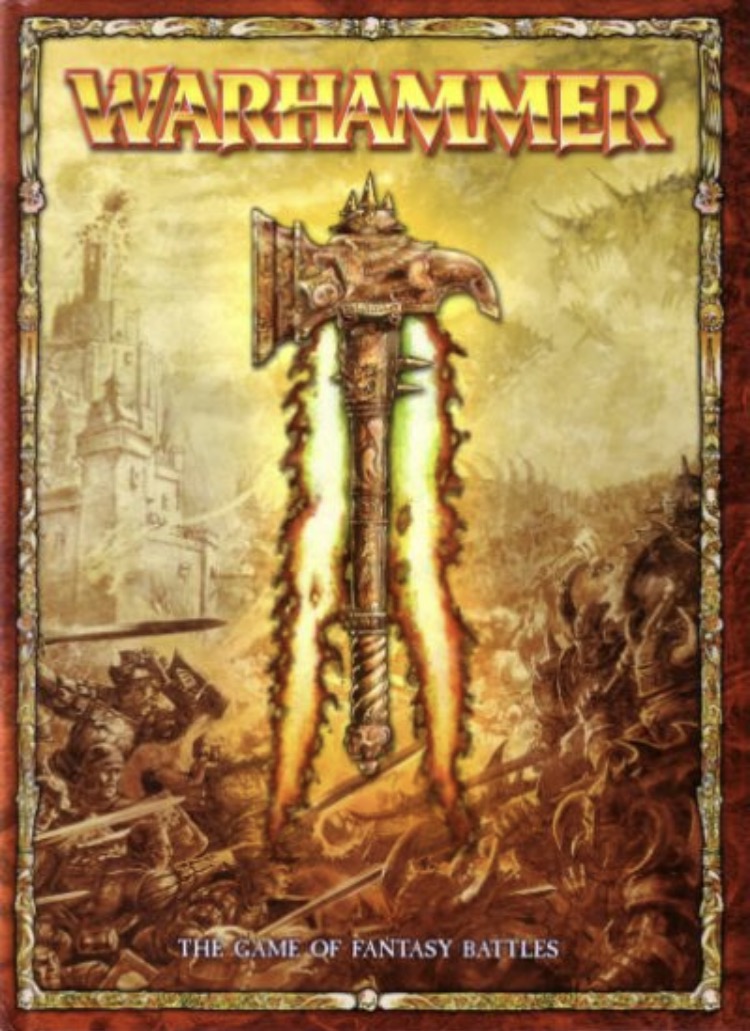 Hi, since my Warseer paint log has seemingly bitten the bullet I thought I would continue on with it here :) I started playing in the early 90s in 4th edition with my brother, we split

I would recommend using lego or something as a base if you’ve got it, if you google how to make 2 part push moulds with oyumaru you will find loads of vids. I found poking little air release holes with a needle or knife worked well for getting stuff to the very ends. If you’re going to do it properly you could even use proper resin for it, you would get a better finish

@semajnollissor
Oh yes! I totally agree with you!
Evergreen Plastic is awesome, no hobbyist should be without it.