Since a lot of people in our community are amassing veritable hordes of Hobgrots, and many folks would like to give them a more classic touch, I thought I’d make this little post to show how I went about sculpting a Scythian cap on a recent conversion. Please bear in mind that this method is intended to be quick and easy, so it will mainly be of interest to those who are not very experienced with putty work. If you already are an accomplished sculptor, you can move on, sir, because there’s nothing to see here.

It should be suited to mass conversion, as it consists of small, easy steps that can be performed in assembly-line style if you have a lot of goblins to convert.

These are the tools I used: a hobby knife for cutting simple shapes like triangles and rectangles (which is what this method mostly consists of), a blunt sculpting knife for moving and flattening the putty, and two silicone brushes for smoothing over surfaces and transitions. (Also, sculpting always requires some kind of lubricant, my go-to being petroleum jelly.) 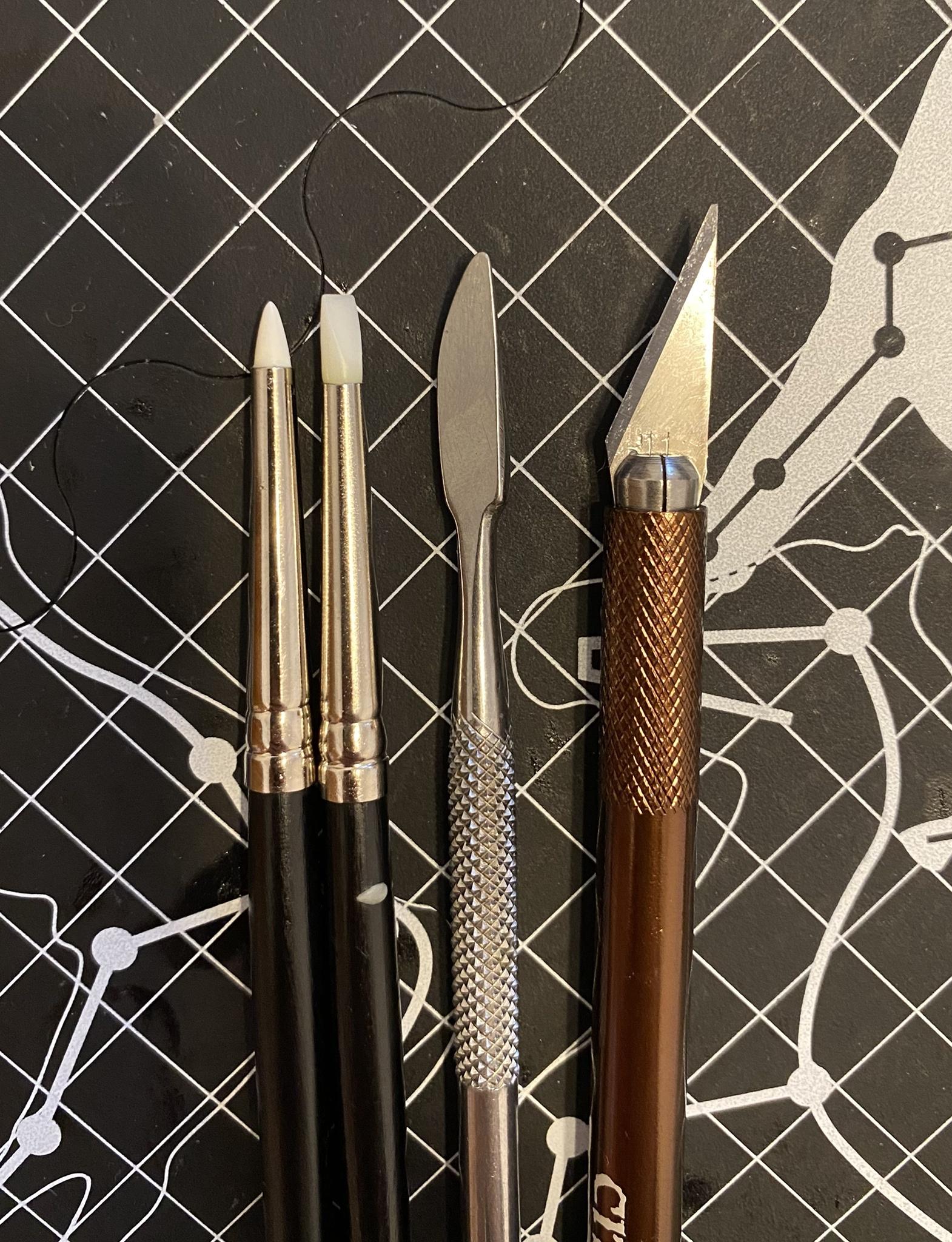 For this conversion, I started out with the Orc Head that came in the Mantic Ironclad box. 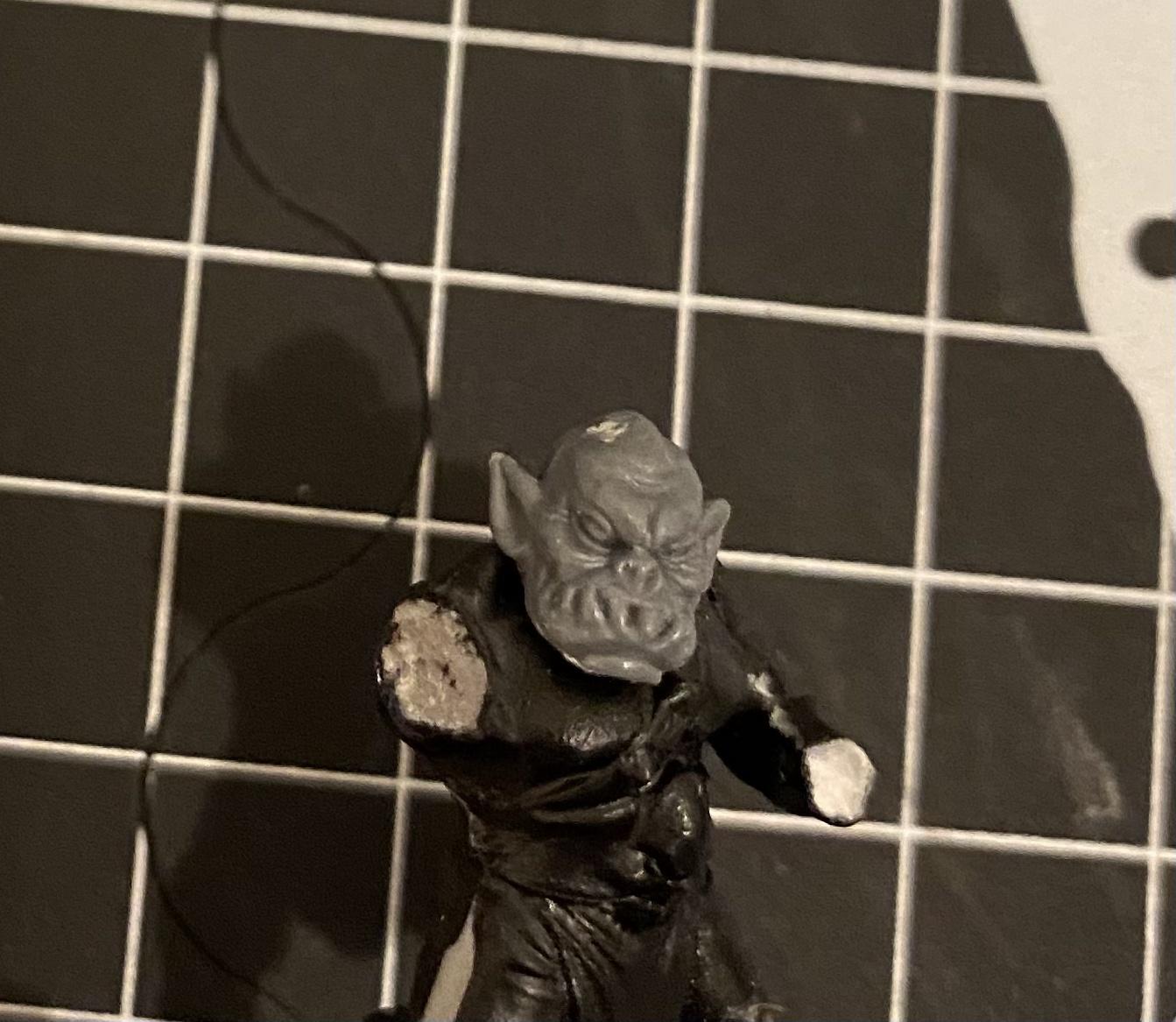 First of all, I had to make his face look a bit more like a Hobgoblin’s: 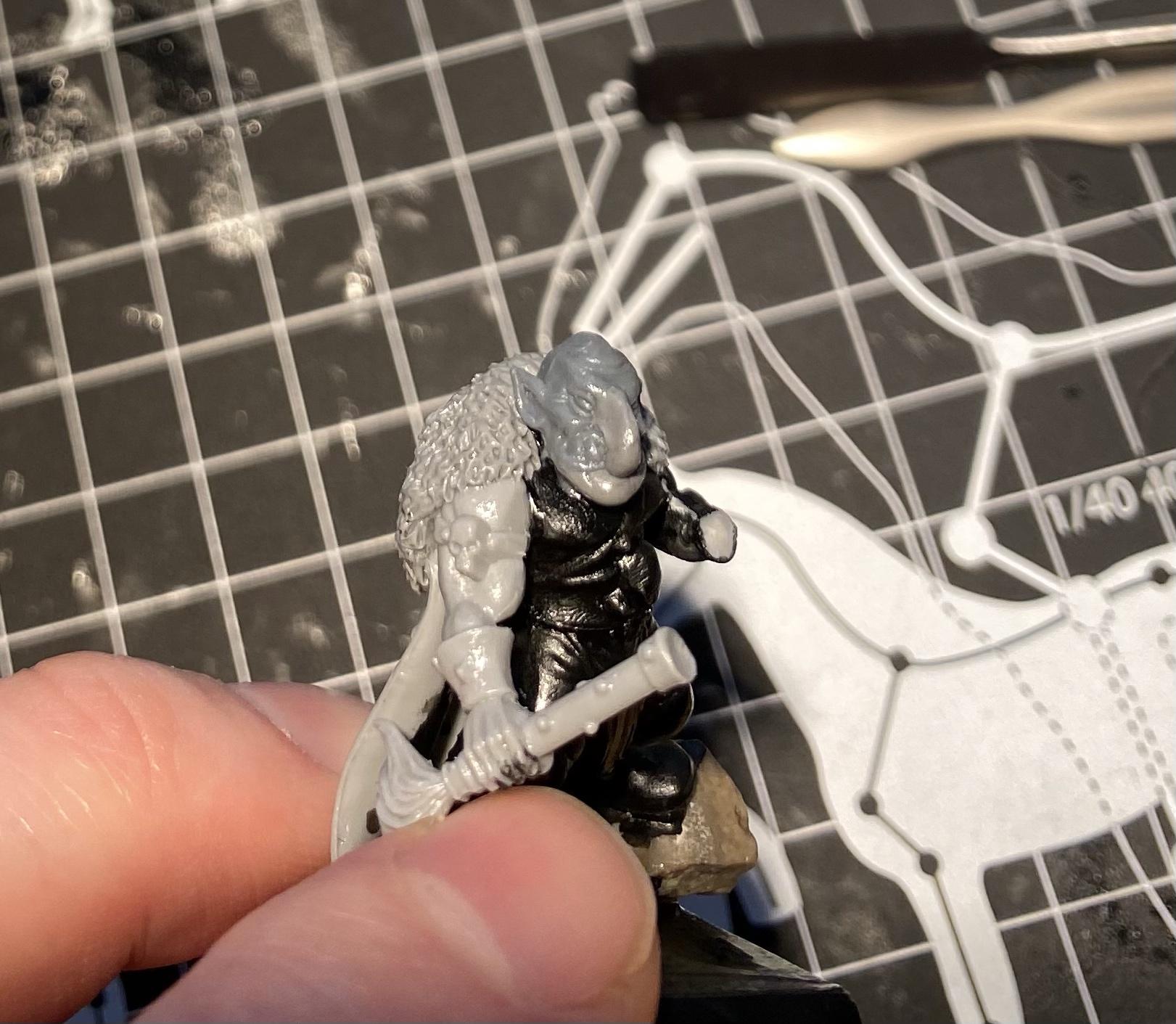 If you are working with Hobgrots, you probably won’t have to do any preliminary work on the face. The method I used for the cap should, mutatis mutandis, be applicable to all kinds of heads.

Now, on to the actual headgear! As a first step, I just put a flat piece of putty onto his head, cut it into a triangular shape , and smoothed it over with a silicone tool. 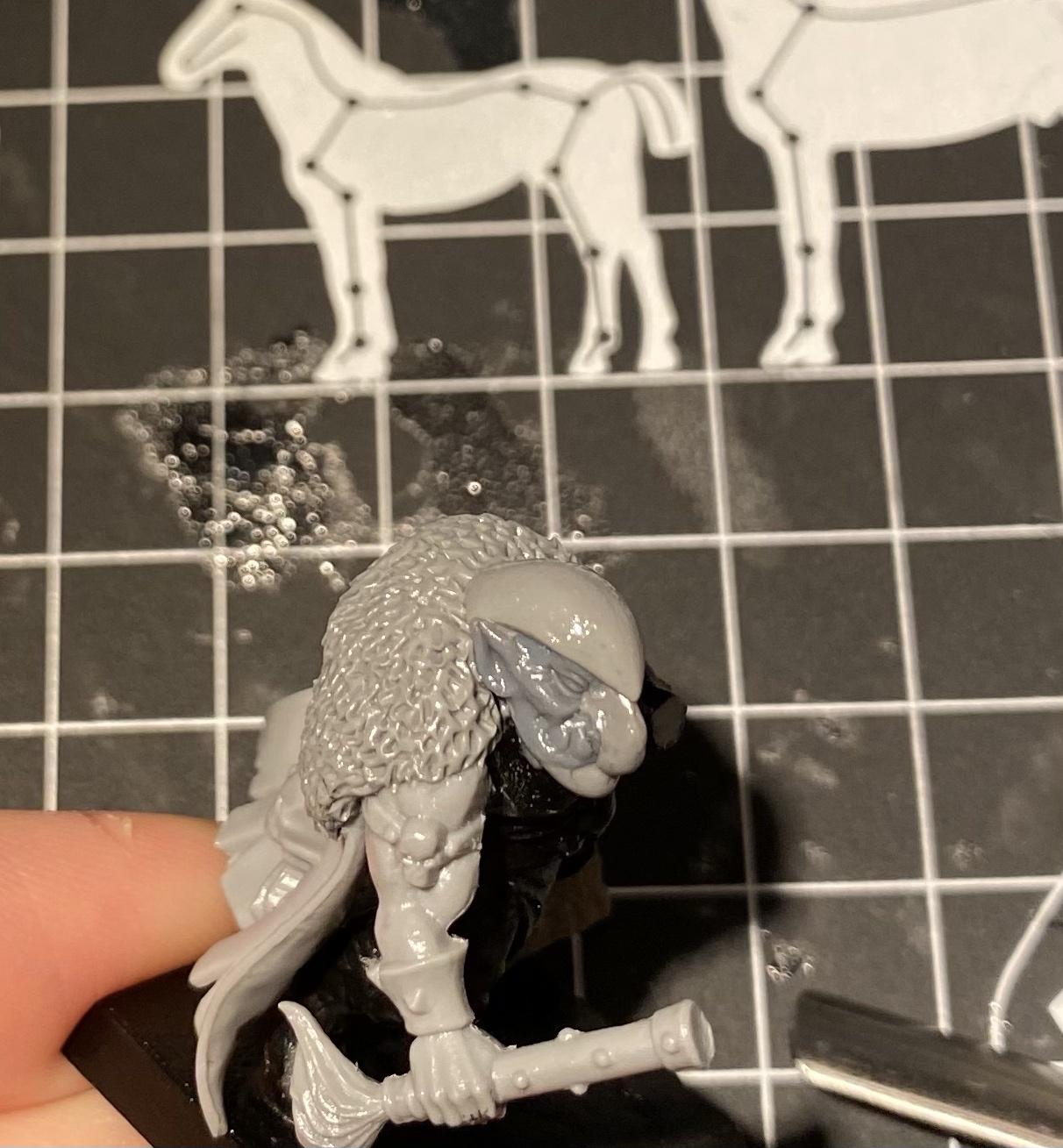 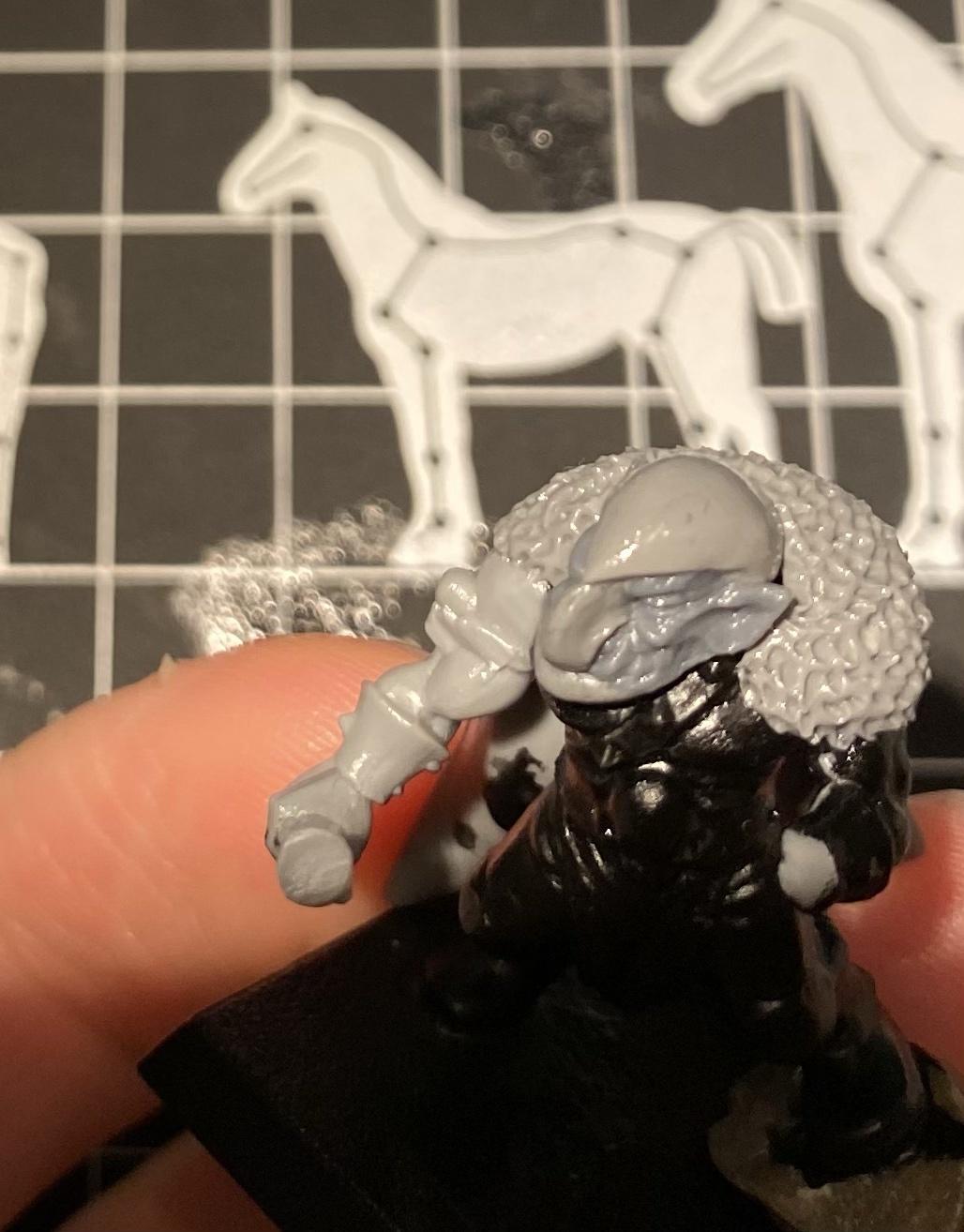 When this first stage had hardened sufficiently to not get ruined by a stray tool or finger (takes about 3-4 hours for Procreate in my experience), I added strips of putty in front of the ears. Any excess was removed with the knife. Essentially, this step is just pressing some putty onto the head and cutting it into the shape of a long rectangle. Again, everything was smoothed over with silicone tools. 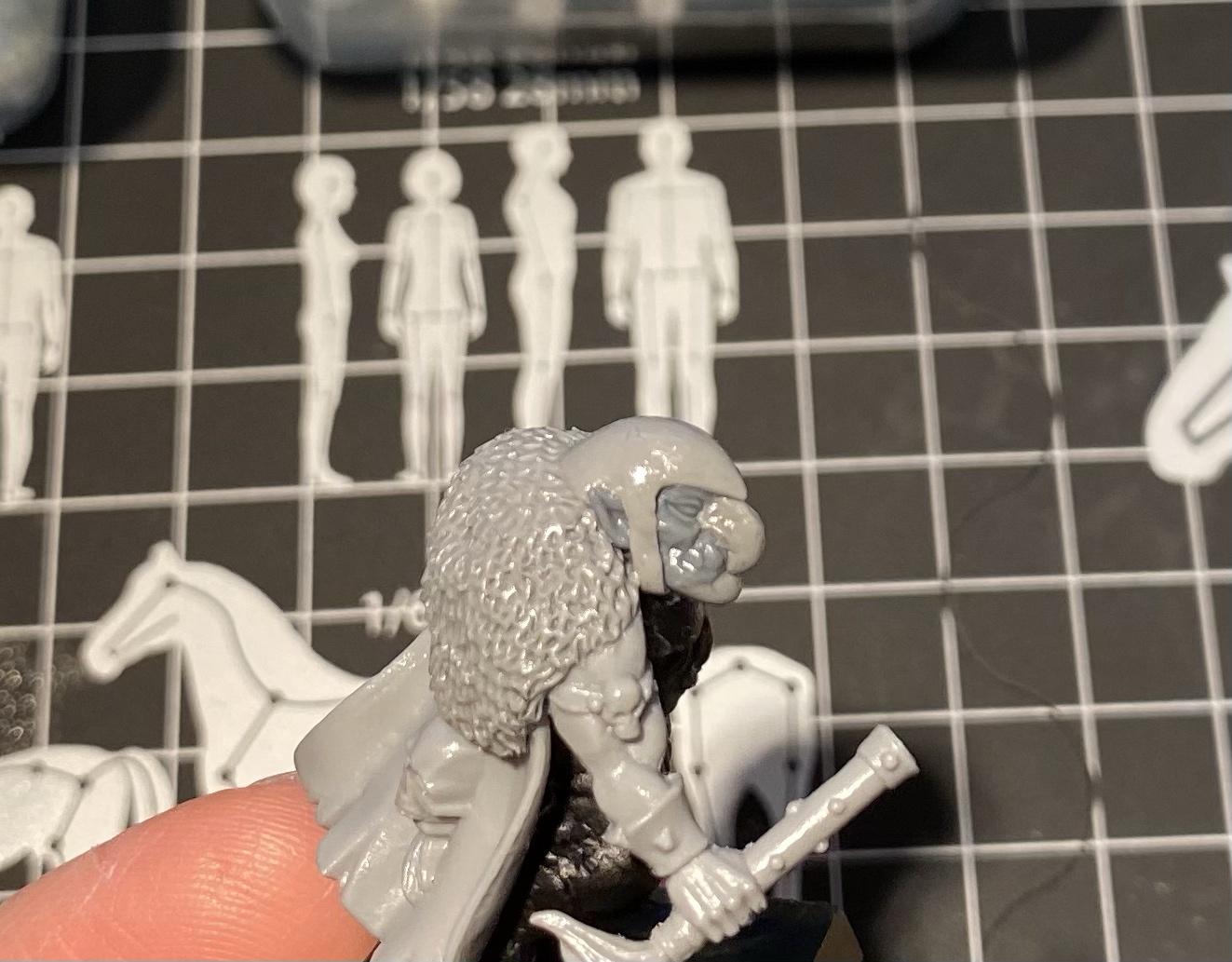 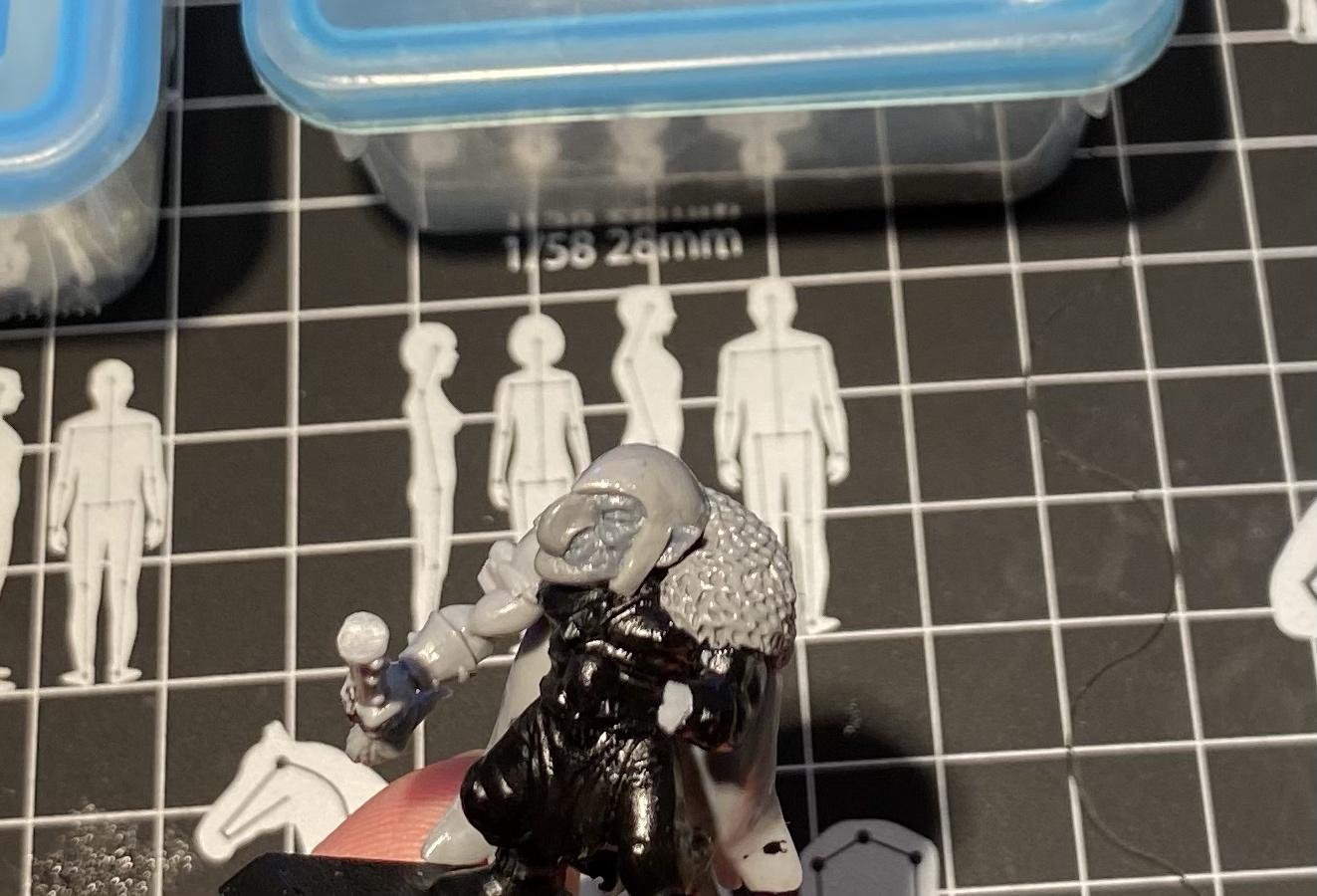 Next I made the back flap, again after giving the previous stage enough time to harden . Once more, I just put a piece of putty into place, pushed/cut it into a triangle, and smoothed it all over with the silicone tools, especially the transition to the main part of the cap. 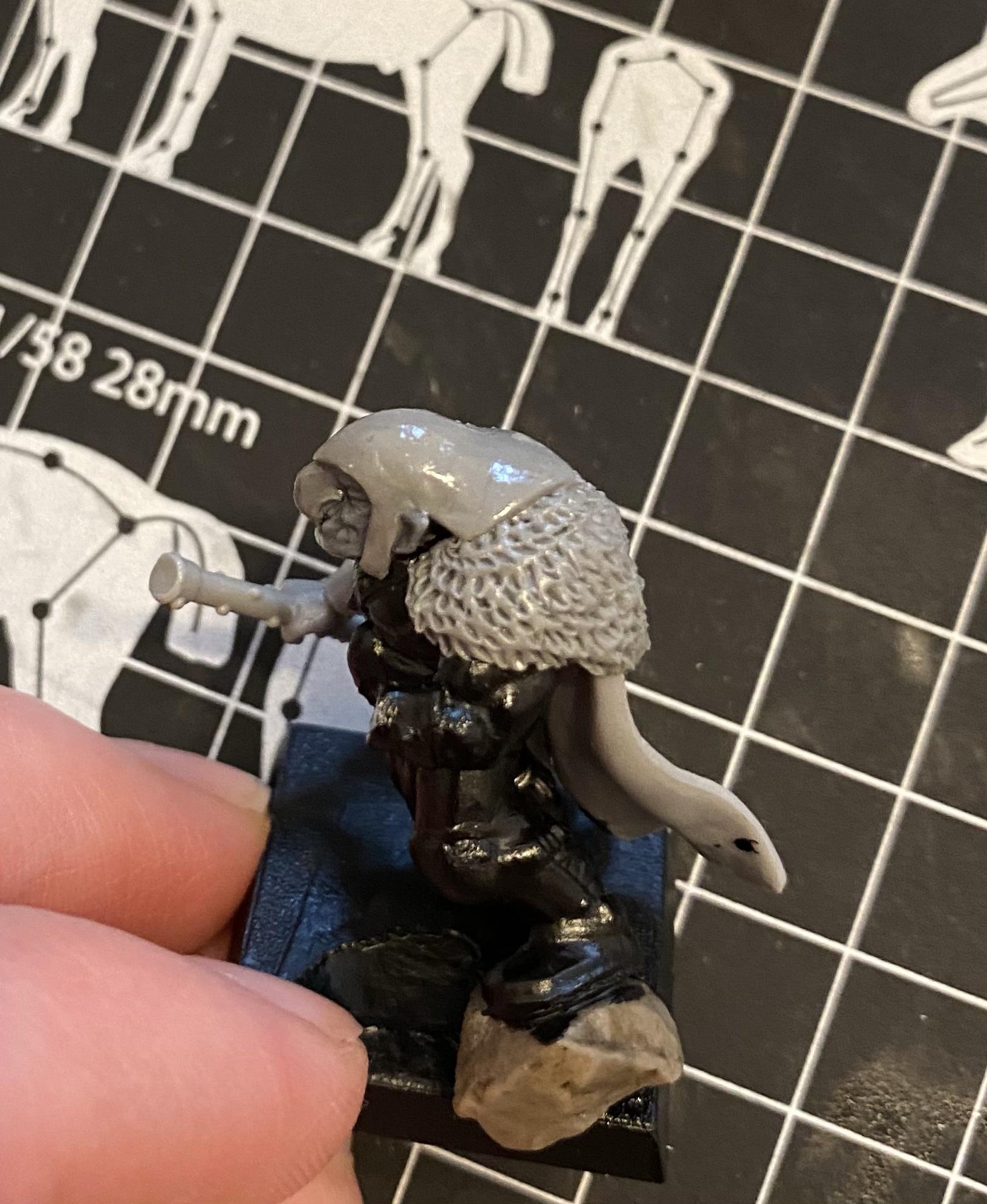 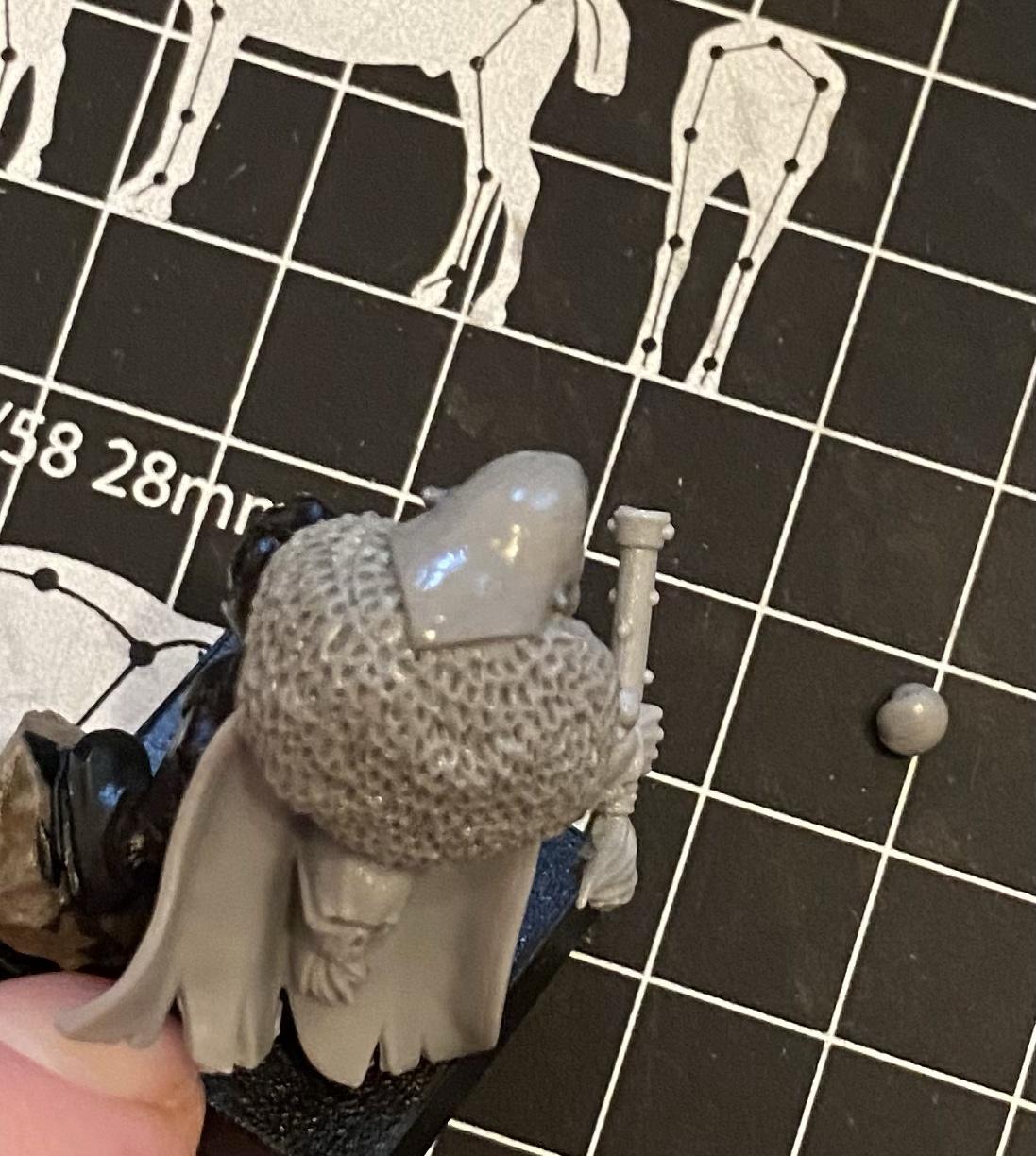 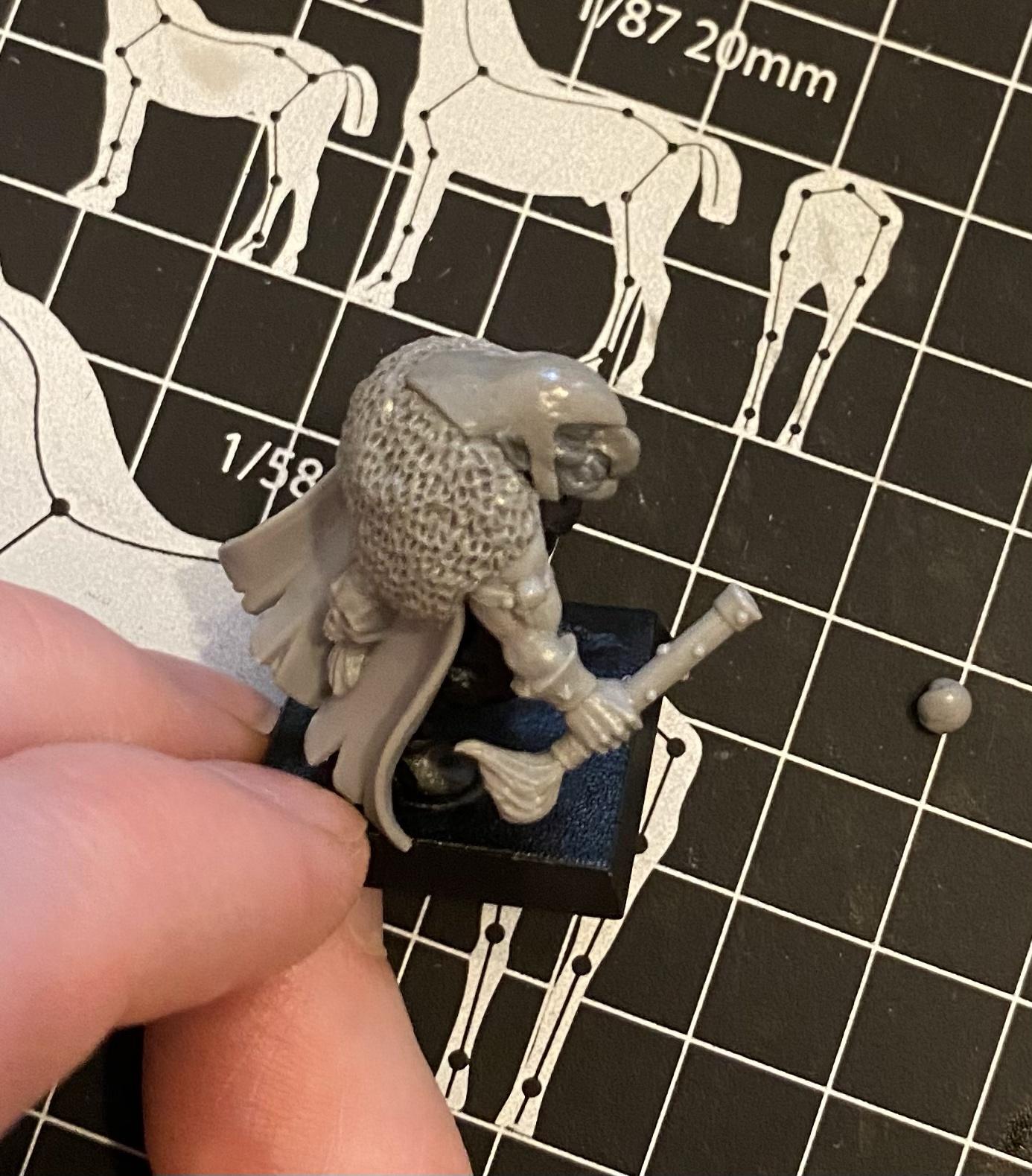 If one were after a Sneaky Git kind of cap, one might actually stop here, but in this case I wanted the typical cone on top. So, after the last stage had hardened, I just placed a piece of putty on the cap and formed it into a roughly conical form with my fingers. Beware: the following picture looks very ugly indeed. 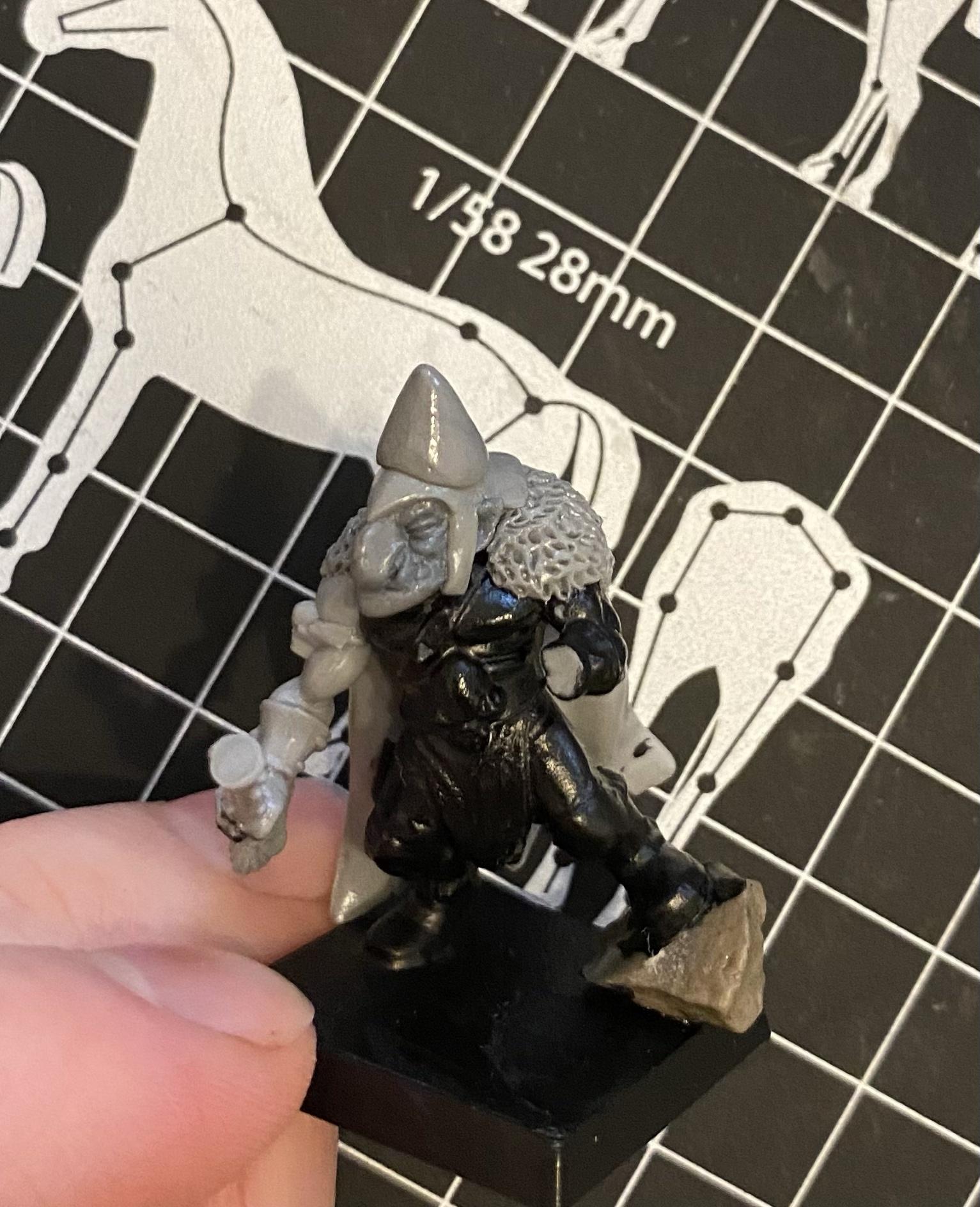 Then I set about bending it into something approaching the intended shape with my fingers. As soon as the general shape looked more or less as it should, I smoothed the transition between cone and cap first with the metal tool, then with the silicone tools. 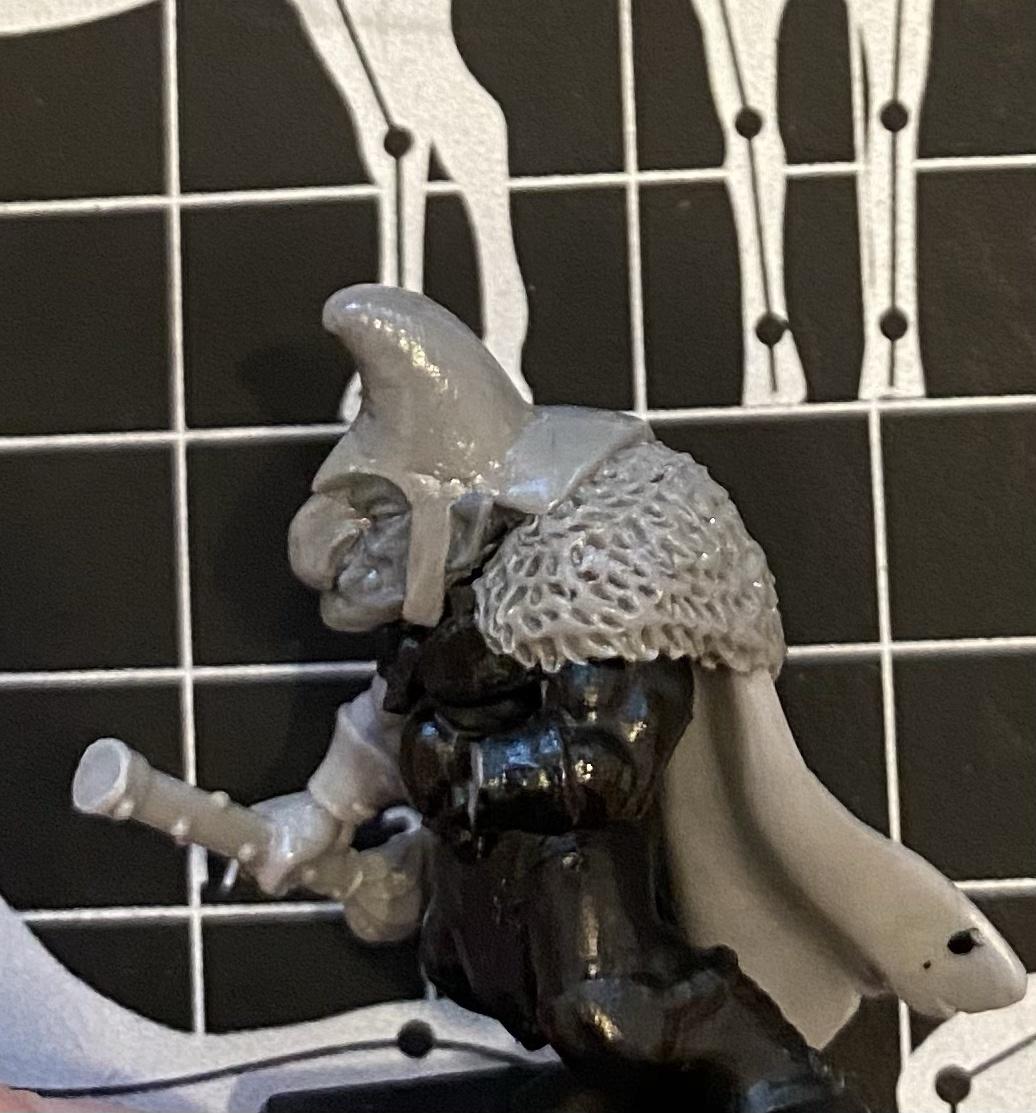 The rest was just getting rid of the nasty fingerprints, some final adjustments to the shape, and some more smoothing over the transitions, all done with the silicone tools. Here’s the result: 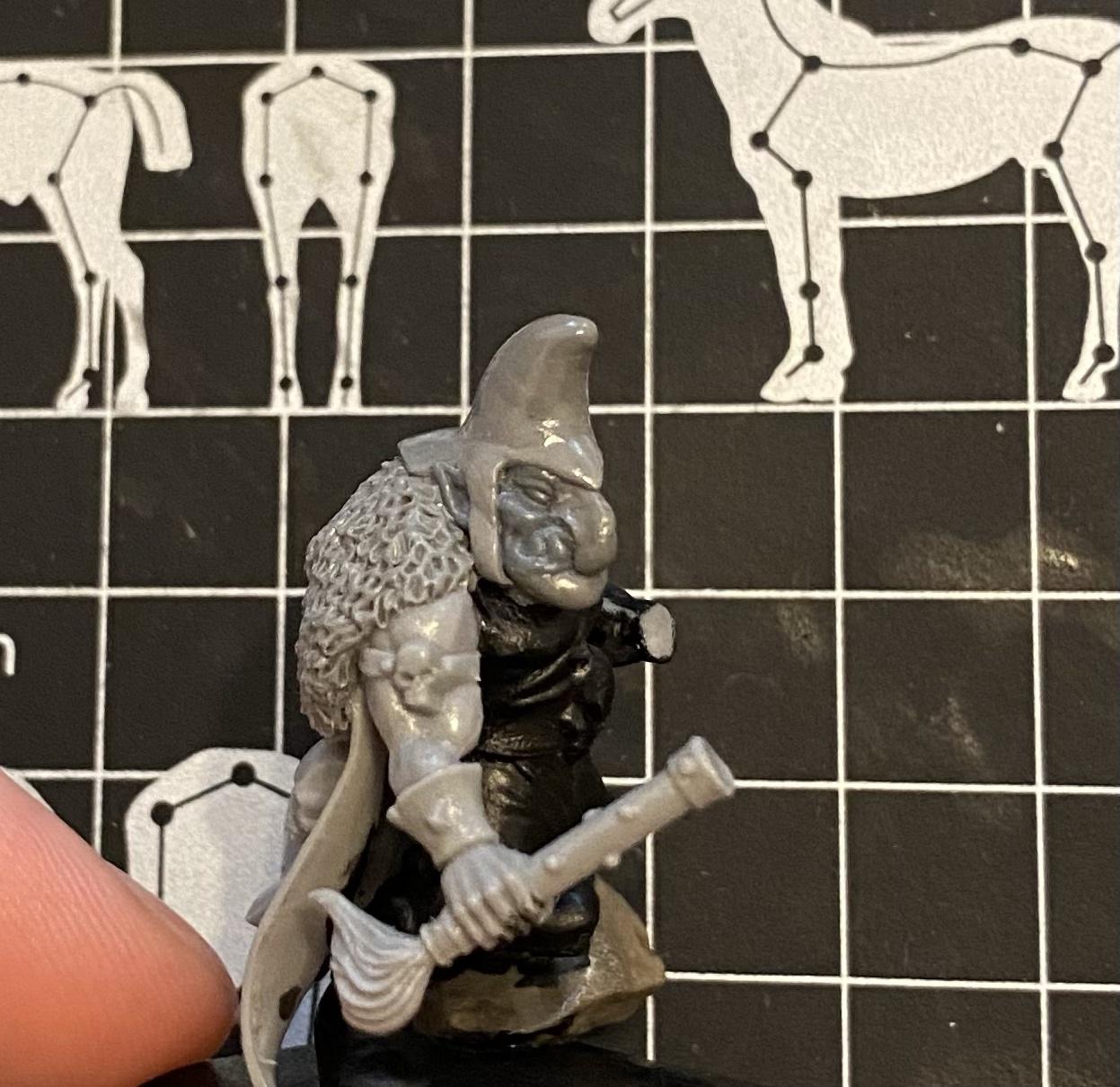 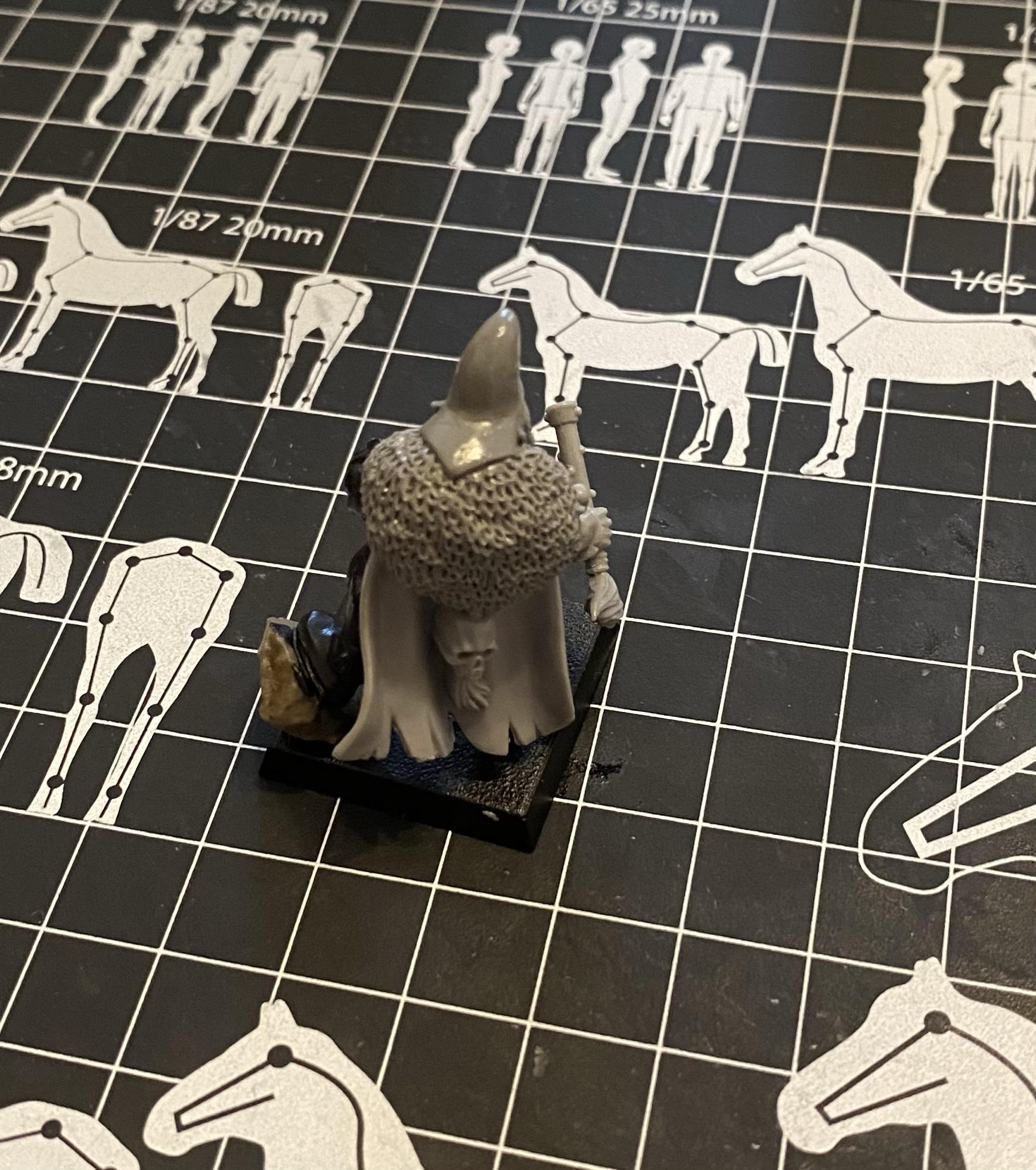 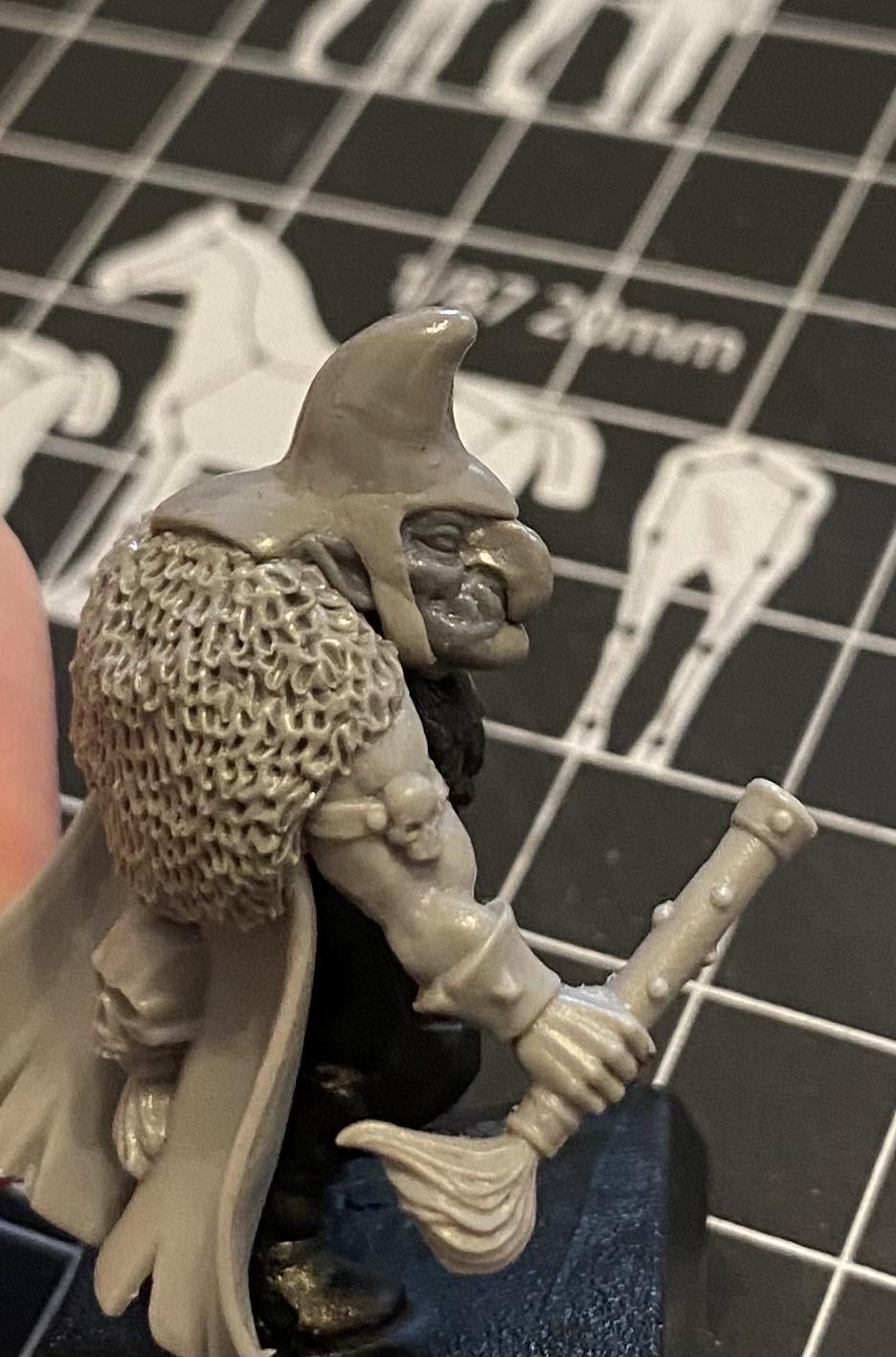 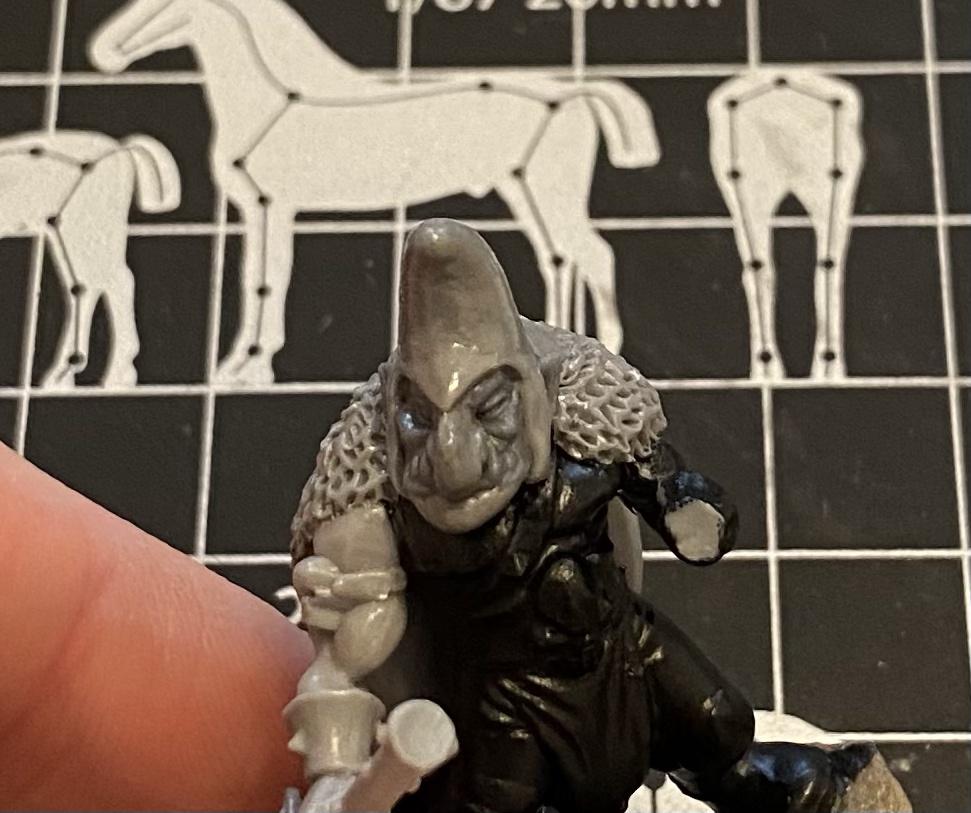 So here we are! Details like stitches, fringes, and any kind of ornaments may now be added ad libitum. For the expendable tabletop masses, however, the result shown here will probably be sufficient.

I hope that this little how-to may be helpful to some of you. Have a great time converting your hobgoblins!

Super useful! Public servant antenor over here giving the people what they want

Thank you! This is so handy, really appreciate you taking the time to explain in this kind of detail.

Thanks for sharing @Antenor! I did the caps for my unfinished GH entry in one go and I fought quite a bit with the shape using Green Stuff. In hindsight, it would have been a better idea to first build up the core of the cap, let it cure and then do the fine work (folds and such). For softer media, its always a good idea to have some kind of armature – not essential but it makes your life a lot easier.

By the way, this is a fantastic cutting mat. I want one. May I ask who the manufacturer is?

Thanks for the kind words, good people! I’m happy that you find this small contribution useful.

@Anzu Yes, I’d probably also use a piece of wire as a skeleton for a larger cap than this one, and of course always for a Big Hat. It would require an additional step in the process, though. In this case, I went for maximised simplicity and tempo.

The mat is from Greenstuffworld - they have one in A4 and one in A3. I recommend the A3, as the additional space makes working on it much more comfortable. Here’s a link to the product.

Thanks a lot! Yes, you’re absolutely right but it also depends on your skill level of course. I still cannot believe how Admiral does his quick and dirty tutorials in one session. For me it takes the fun out of it when I have to fight too much wet putty, so I tend to divide everything into minuscule idiot-proof steps and work on several models at the same time – takes ages but I’m more satisfied with the results.

Thanks for this, really useful. I tried to sculpt some caps for some of my hobgoblins but gave up. Might give it another go now I can see where I went wrong.