Rüg Zharrtromm never smelled something this bad. He fought unwashed ogres and cave-dwelling goblins most of his life, but the smell around the Red Cairn was terrible. Only Hashut could knew why he sent his master, the great sorcerer Vlag Koluzkul, in the heart of Sylvania. And yet, Rüg stopped thinking about the smell, as the Templehof army marched to claim the Red Cairn once again.

Happy Halloween! In this battle report, a brave army of chaos dwarfs face the might of Templehof! A 1500pts battle with a major objective (250pts for whoever controls the Red Cairn) and a small objective (100pts for controlling the graveyard).

Chaos dwarfs turn 1
The hobgoblins wolf riders advanced on the right, as the dreadquake mortar deployed inside a swamp for some natural protection. The sorcerer remained close to the artillery with his blunderbuss unit, while the infernal guards escorted the bullcentaurs close to the graveyard.
With nothing to hit, the sorcerer could cast nothing but Flames of Azghor, and failed to roll the mandatory 25+.
The dreadquake mortar hit the vampire lord on his abyssal terror, but didn’t wound him. 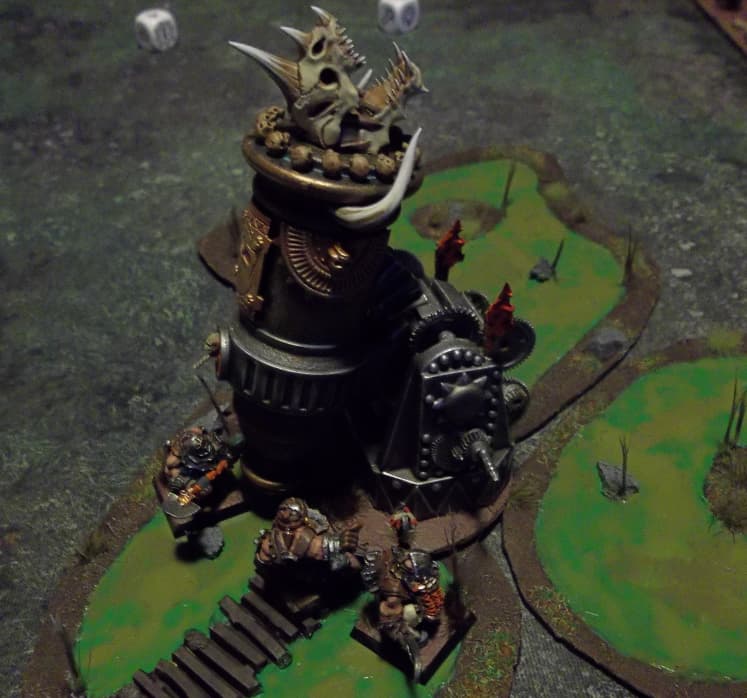 Templehof turn 1
The crypt horrors reached for the wood to avoid a charge from the bullcentaurs, as the vampire lord and the black knights advanced. On the right side, the necromancer reached for the cairn, escorted by the skeleton warriors and the ghouls.
The Necromancer granted Hellish vigour to the skeletons, ghouls and himself. 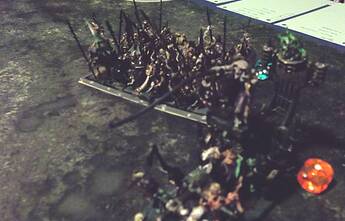 Chaos dwarfs turn 2
The chaos dwarfs started the second turn by slowly advancing to reach the Cairn or the ennemies. The bullcentaurs failed to charge the black knights, as the infernal guards marched to fill the gap that was on the bullcentaurs flank, avoiding a flank charge next turn.
The sorcerer casted Ashstorm on the black knights. With 2 dices left, he tried to cast Flames of Azghor (18+), and managed to roll a double 6’s! 4 black knights were consumed by the fire, and the sorcerer easily saved the S6 hit he suffered.
The dreadquake mortar aimed for the vampire, but the shell fell on the black knights, destroying another one. 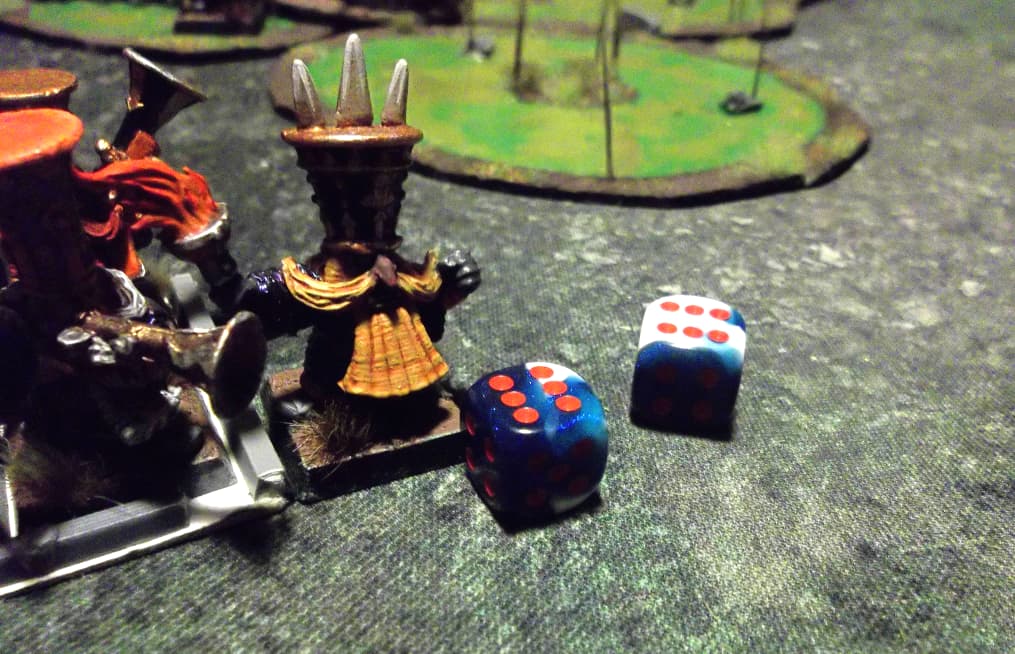 Templehof turn 2
The bat swarms charged the bullcentaurs as the crypt horrors failed to charge the infernal guards. The Cairn was claimed by the necromancer.
The vampire lord granted invocation of Nehek on the black knights, and 2 of them came back. Casting Hellish Vigour, the necromancer rolled 2 6’s, screaming for his life as the chaos portal he opened took him forever.
The batswarms got completly crushed by the bullcentaurs (what a surprise!) 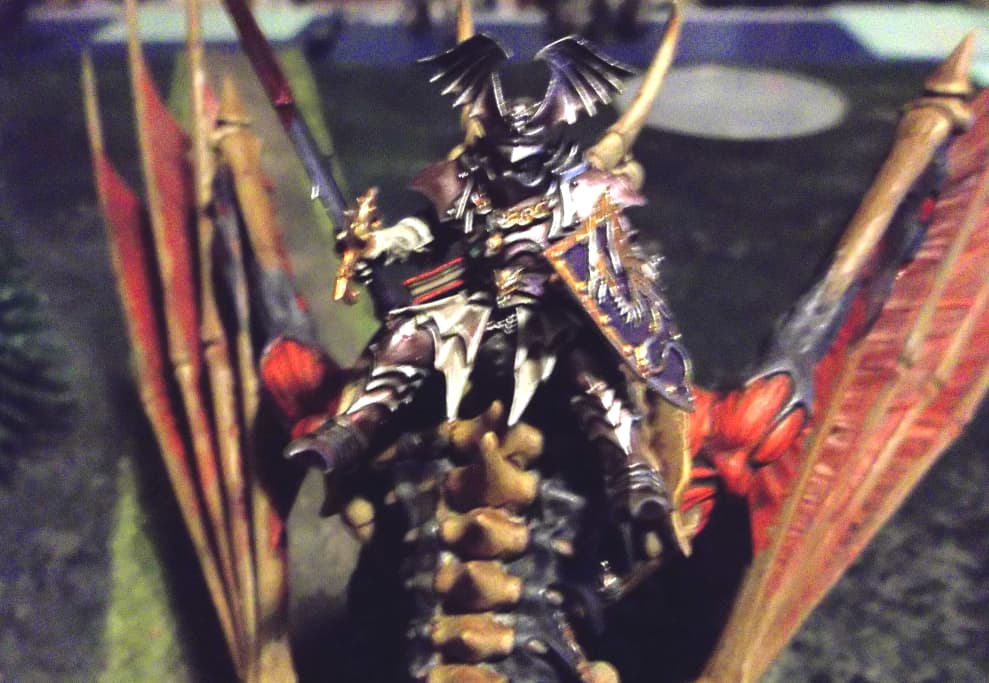 chaos dwarfs turn 3
The infernal guards charged the crypt horrors, as the bullcentaurs charged the vampire lord.
The sorcered burned another knight with flames of Azghor, but as he also rolled 2 6’s, he lost 3 levels of magic, and could do nothing but cast Burning Wrath (8" magic missile) for the rest of the game!
The infernal guards fought bravely, killing 3 crypt horrors as only one bearded warrior died. 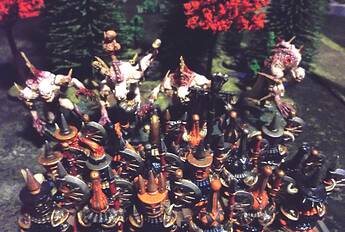 Templehof turn 3
The remaining black knights charged the sorcerer, who ran away. 2 ghouls died charging the wolf riders, withour reaching them, as the skeleton warriors secured the Red Cairn.
The last crypt horrors died as one of the bullcentaurs perished, leaving the Abyssal terror with only one wound left. 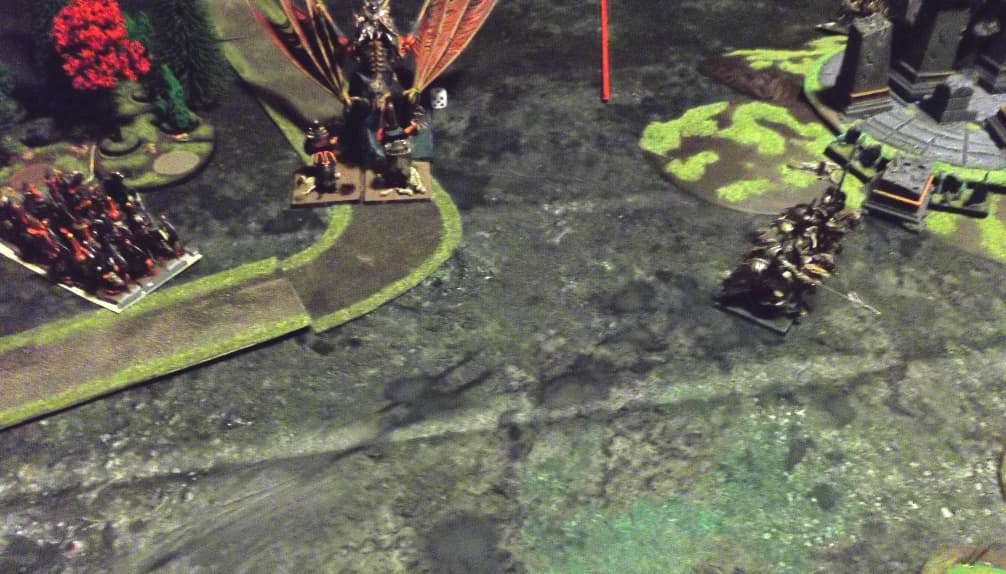 chaos dwarfs turn 4
The sorcerer continued to run away, as the infernal guards failed to reach the vampire lord.
The woldriders killed off another ghoul, as the mortar took down another knight. The vampire lord lost his mount and a wound after some excellent rolls from the bullcentaurs. 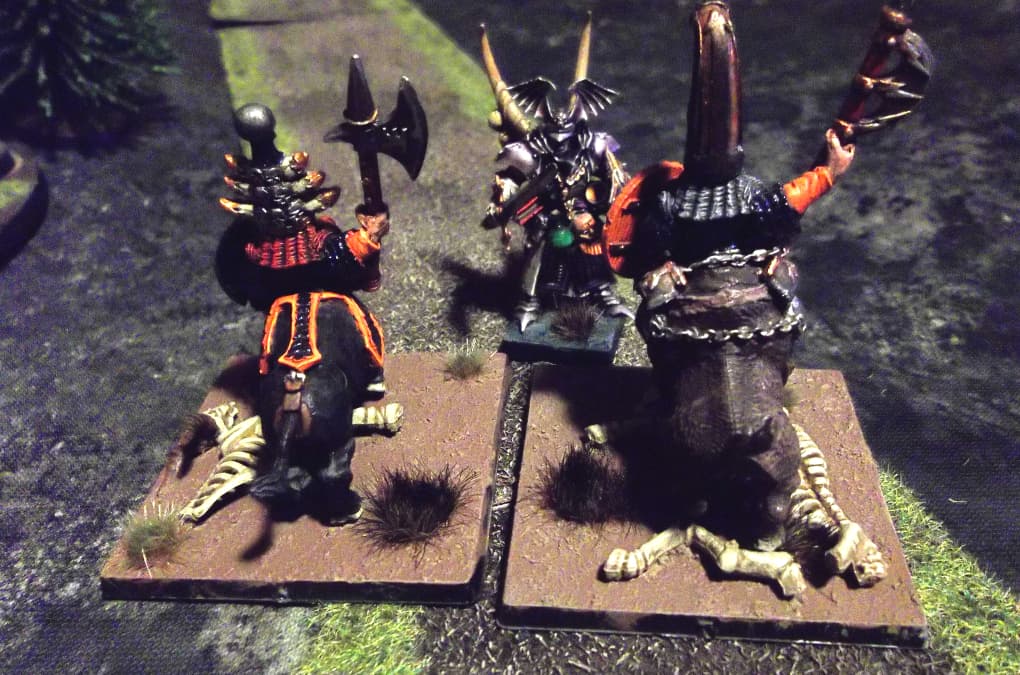 Templehof turn 4
The black knights charged and destroyed the dreadquake mortar, floating away from the hellish landscape the artillery made. The vampire lord wounded a bullcentaur, and won the fight, without making the bullcentaurs flee.
The ghouls charged the wolf riders, killed 5 (and only losing 2!) and made them flee out of the map. 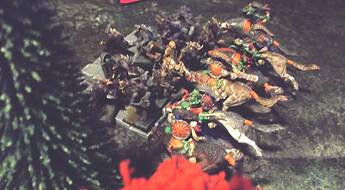 turn 5
During turn 5, the infernal castellan charged the vampire lord as the infernal guards reached for the graveyard, securing 100pts. The vampire lord died as the skeletons didn’t manage to kill off the blunderbuss unit, destroying their attempt to claim the Red Cairn.

With 936pts to 294pts, it’s a brillant victory for the Chaos Dwarfs! The Red Cairn being secured, the sorcerer can now complete the prophecy (or was it just a tantrum from Hashut?) 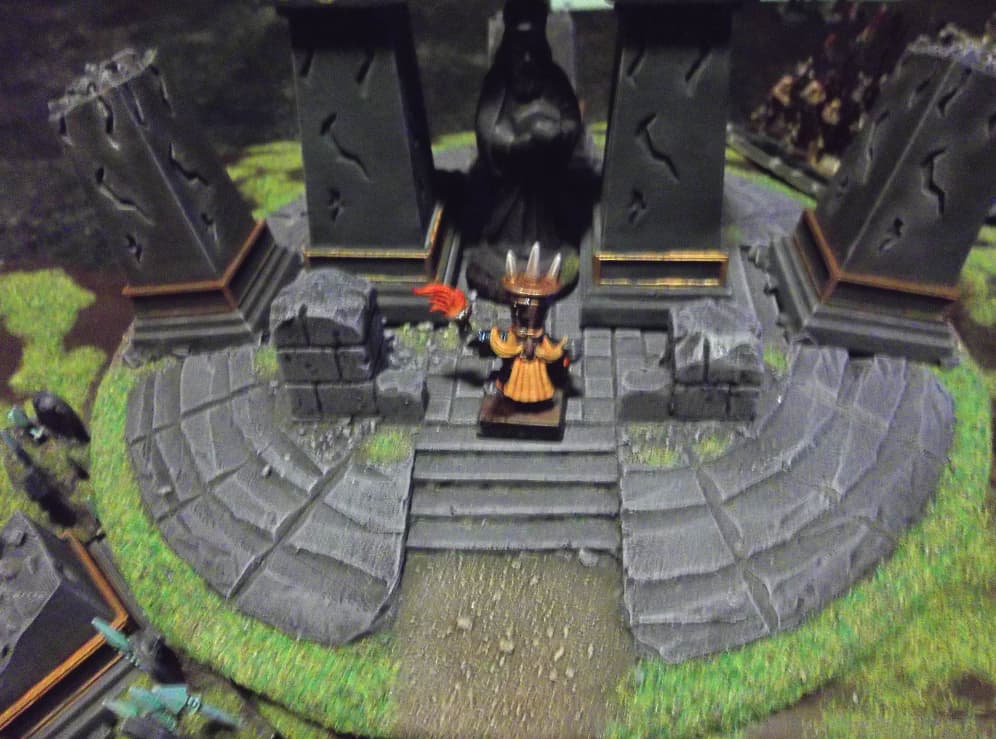 Permission to print in zine?

Of course! You can also rewrite the battle report for a better reading, if you want!

With 936pts to 294pts, it’s a brillant victory for the Chaos Dwarfs! The Red Cairn being secured, the sorcerer can now complete the prophecy (or was it just a tantrum from Hashut?)

Congrats on the army and its performance! This was a jolly good show, and I really liked your way of summarizing the turns. Good flavor setup, too; hat’s off to Zharrtromm!