Listen here lads, I won’t say it again. Lose these lofty ambitions of seeking riches in the wastes. There once was a host clad all in gleaming white that was led to it’s doom by the greed of one foolish Thane. To the north they sought untapped seams in those accursed mountains, and those accursed mountains welcomed fresh souls into their bowels.

We know not the full tale of their ill fated expedition, but we have heard rumours of a sickly pale host emerging from those darkest of caves… Changed…

Now sit and be still beardlings, as I sing to you The Oathbreaker’s Dirge.

Welcome all to this account of The Oathbreaker’s Dirge, a thread dedicated to the assembly of my chaos dwarf host led by Kharrdruk Oathbroken, a foolish dwarven Thane who gambled the souls of all who followed him and lost.

Browsing the old forum years ago before the death of the old world I fell in love with the helmeted chaos dwarfs from 3rd edition and the fresh take that Clam commissioned via the skilled hands of John Pickford. Now that the range is available through Old School Miniatures I have caved and decided to start a chaos dwarf army for a new 6th edition scene that is sprouting up in my area. 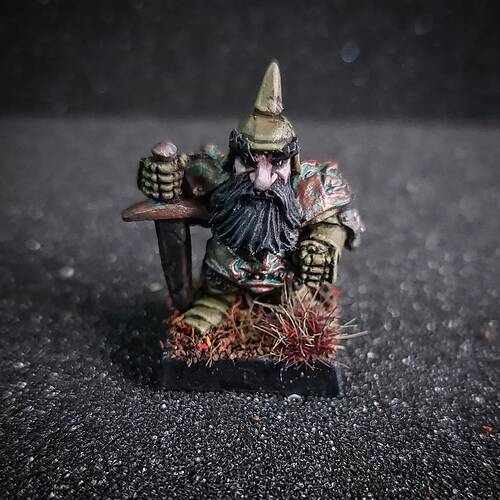 Kharrdruk Oathbroken - Chaos Dwarf Hero and leader of the army in games below 2000pts, once I get to 2000pts I’ll be giving giving him a big beastie mount to elevate him above the rest of the host.

Hopefully I’ll be getting the mounted version in the post in the next few weeks and I can’t wait to see the sculpt in person. 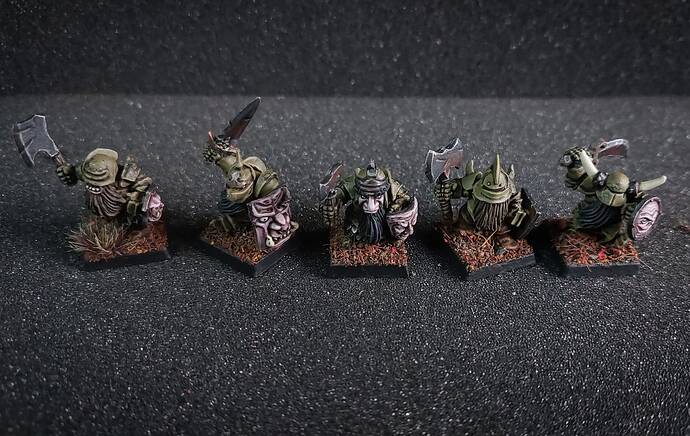 The Shattered Anvil - A selection of dwarves from the block of warriors that form the backbone of my battle line in smaller games and act as the bodyguard for Kharrdruk Oathbroken when he’s in his hero form.

These were great fun to build and even funner to paint, they’re simple sculpts but they ooze character and with the face shields I’ve slapped on them I think it really helps to add a little bit of individual flair to each guy even when they’re in a unit.

I’m hard at work getting the rest of the Shattered Anvil finished before I move onto the next units in the army, I might take a slight detour to some artillery in the meantime though for some easy wins for getting units fully painted.

Its great you have started a blog, i will be following with interest. I also backed this kick-starter but haven’t painted much of it yet- this will help motivate me. V nice colour scheme.

It seems an army full of character! Good

Awesome take on a limited palette scheme! Looking forward to seeing what you do with more OSM goodies. Zodd roped me into the realm of helm as well. Keep up the great work!

@Zoddtheimmortal Thanks for the support! The kickstarter was fantastic, I’ve backed the latest one from OS minis offering the Lammasu and can’t wait to get my hands on it.

@Bassman cheers! I loved the named units and armies that would appear in all of the old white dwarf battle reports and though I’d have a crack at doing the same with this army. It helps to give every unit a bit of flavour outside of just it’s appearance

@Reaver Long live the helm! Cheers I was trying to go for a muted palette that would pop with the foeshtones and warm autumnal basing. I was split for a while on whether to go old school and do every individual guy a different colour but ultimately I chose to try and get that individual character for each guy through their face shield

I’ll be giving some updates on progress with some more pics soon, currently on the highlighting stage for the second half of the shattered Anvil so hopefully will have them done by the end of the day tomorrow

@Kharrdruk_Oathbroken I second you. I give all my units and characters a lilttle background story. It’s so fun!

Oh this is the range I was asking about! The pictures on their site aren’t that clear (for the rank and file). I’m very interested in their progress and I like your choice of colours!