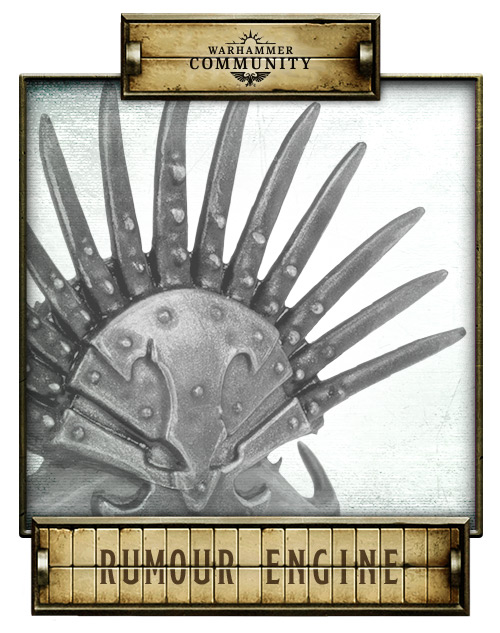 Indeed it does! What’s that curve in the lower right hand area of the figure? Is that a curling horn, or a mustache?

Looks very dwarfy to me, and not really fitting in with either of the current dwarf lines! Could it be…?

Gears whirr into life, a mysterious light fills the upper tower here at Games Workshop HQ, and we can hear a burst of cackling laughter down the hall. It can only mean that someone has switched on the Rumour Engine again. What glimpse of the future will it show us this week?

As the light fades and the laughing continues into the night, we remain perplexed about what this could be. Do you have any ideas? Share your guesses on the Warhammer 40,000 and Warhammer Age of Sigmar Facebook pages, and let us know if you saw any Rumour Engine reveals during Saturday’s online preview.

Anyone else thinking Lizardmen?

This is VERY interesting. What if oathbreakers are next? This flavour text is VERY us!

Exactly what I thought @chitzkoi

@Deebo @Zoddtheimmortal there are definitely Lizardmen vibes but if that was Lizardmen I would expected those longer details to be feathers but they look more like some kind of metal?

On a live lizardmen I would agree but on a death mask, which is where I was going with it, I would assume metals would be used… not saying that I am correct… being games workshop… who knows it could end up as new AOS stormcast giant halflings called “Gargant Stormcast Fire Follicle Feet” lol

I so want to collect an army of those now!

I took this latest story as a hint of maybe a new race fighting with Order/Seraphon? But still hoping for something Chaos Dwarf related…

It’s getting really tricky now isn’t it, the below could be interpreted as Chaos Dwarf of just general destruction with Kragnos and his bros.

I enjoy thinking it may be us though, even if it ends up as something else it’s fun to think we may be coming back and looking for portents that suggest it

Beyond that, rendered in a terrible likeness of life, was the oversized visage of some horned deity, mountains of amber skulls crunched between its fangs.

Tatto’nek was not sure whether it was his imagination, or whether the illumination grew stronger then. It cast the next mosaics into stark relief – images of the centaurs, led by their terrible god, laying waste to the eyries of the drakes. In places the light pulsed faintly. Scenes of mountain peaks crashing to earth and draconic skulls piled high as the beasts were slaughtered flickered like dancing shadows, sending the skink clicking in unease.

I thought Lizardmen, or Moche Dwarfs. We owe @Uther.the.unhinged a drink if it’s Haztec.

An octopus for the underwater elves?