Greetings, everyone! So, the Corroded Company is finally migrating to the new site. EDIT

From my custom Mordheim warband rules: “Chaos dwarfs do not usually venture very far from their ancestral lands, baring the occasional slave hunt or border raid into nearby territories. However, even a rigid and brutally industrious society as the one of the Dark Lands produces misfits and outcasts, not least owed to the disruptive chaotic powers it hazardously cultivates. Especially the desolate mines and bottomless pits of Azgorh tend to bread discontent and rebellion even among the Dawi-Zharr overseeing the slave legions put to work there. These extraordinarily pale and spiteful followers of Hashut are also known as Netherdwarfs. Often when one of the so called hegemons in power exhibits more ambition and feistiness than is deemed tolerable, he is therefore sent on a mission to explore far away lands with only a small party of stalwarts and minions. As the temporary exile is preferable by far to other forms of punishment, the offenders usually hasten to comply, some grudgingly, others eager to prove their worth.” 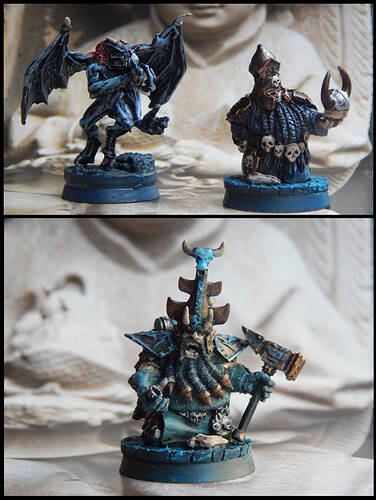 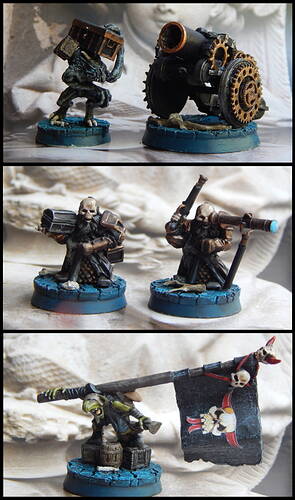 Such wonderful stuff and presentation. Great to see you keep on rocking on new CDO!

Undead dwarfs, what’s not to love!

Great work, are these conversions? I recognise some bits and pieces but not all 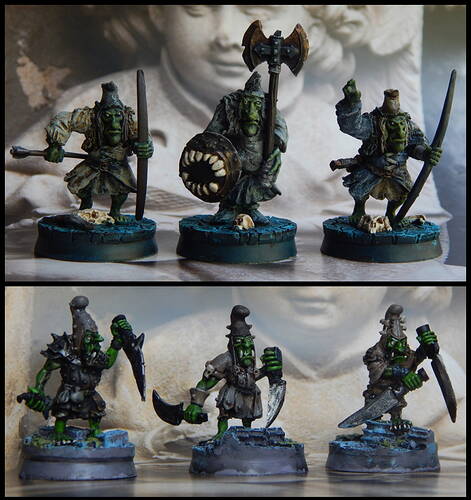 Oh, those are cool miniatures are they Russian Alternative? Good painting as well…

Great paintjobs, the iron golem is indeed great but also really like the blues you have running trough all these in the vases and details, it’s a really nice colour choice going up against that brass. Wouldn’t work without a good paintjob though well done

Awesome scheme. Love the weapon swap on the hellcannon shoveler. That’s one of my favorite helmeted dwarfs. As has been said, the blue tones and the basing are really spot on, hitting that tough to nail balance by tying into the miniature scheme, being distinct enough to highlight the miniature without pulling focus from the mini itself, and being dark enough to add weight.

Gutplate Sheild!!! That’s very Mordheim, the scheme you’ve chosen and your style of painting make it very easy for these minis from various editions of different companies and make the seem like one cohesive warband. Not an easy thing to do, great work

Thanks a lot everyone! Your encouragement is much appreciated!

And (for now) finally: A couple of specialized dwarfs - weapons tinkerer, magma gunner and a rocket launcher team

Yes, definitely a nice weapon swap with that Empire Halberd.
I’ve used them for scythes on chariots and tenderisers etc

Thanks! It was actually more of a makeshift repair, because I got the miniatures second hand and some parts were missing

Here we go again! I often find it quite a challenge to resize other manufacturers’ dwarfs to fit GW scale. So with this MOM figure, my approach was basically taking off the legs and reattaching the feet (plus a fun sized weapon). It’s not quite the fit I’d like, but what is one to do - any ideas?

Looks good to me