Just to start this with a painted Chronopia Swamp Goblin Leader.
(I didn’t know that until this morning after 13 years of no clue).
It’s part of a little between competitions push to clear the part painted back log. 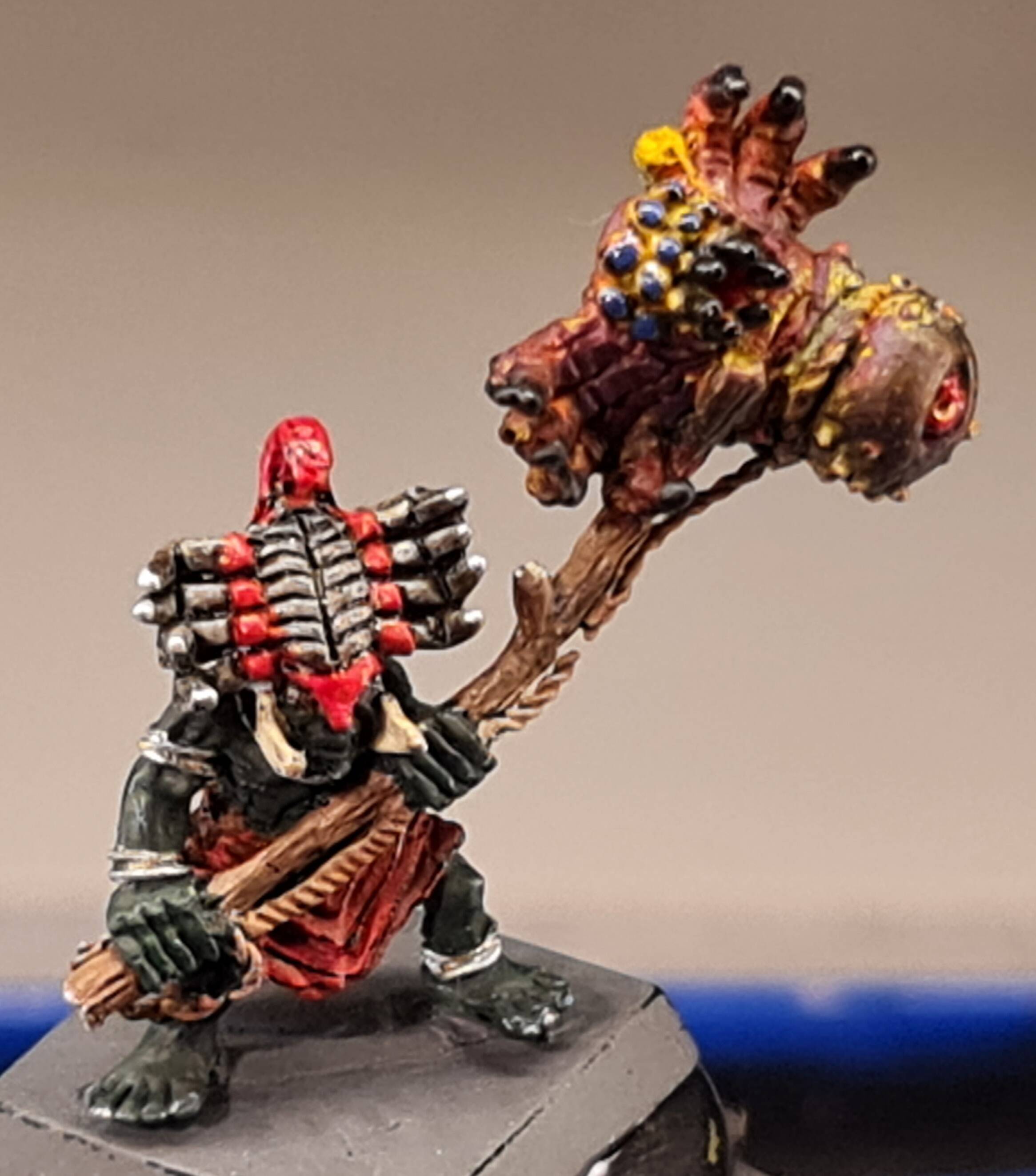 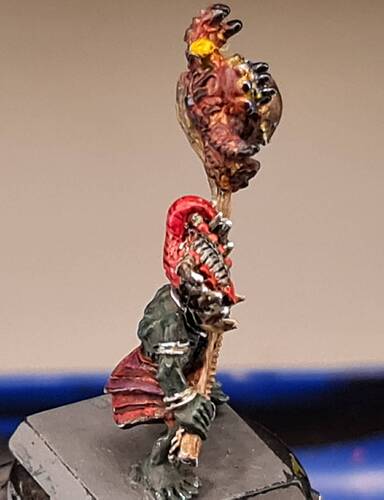 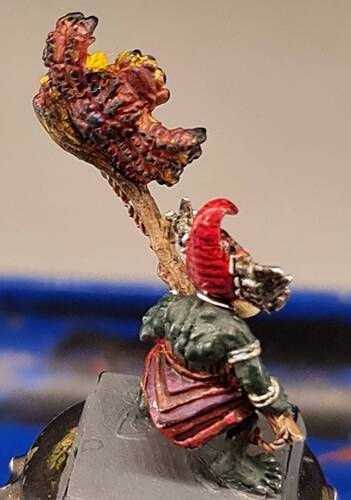 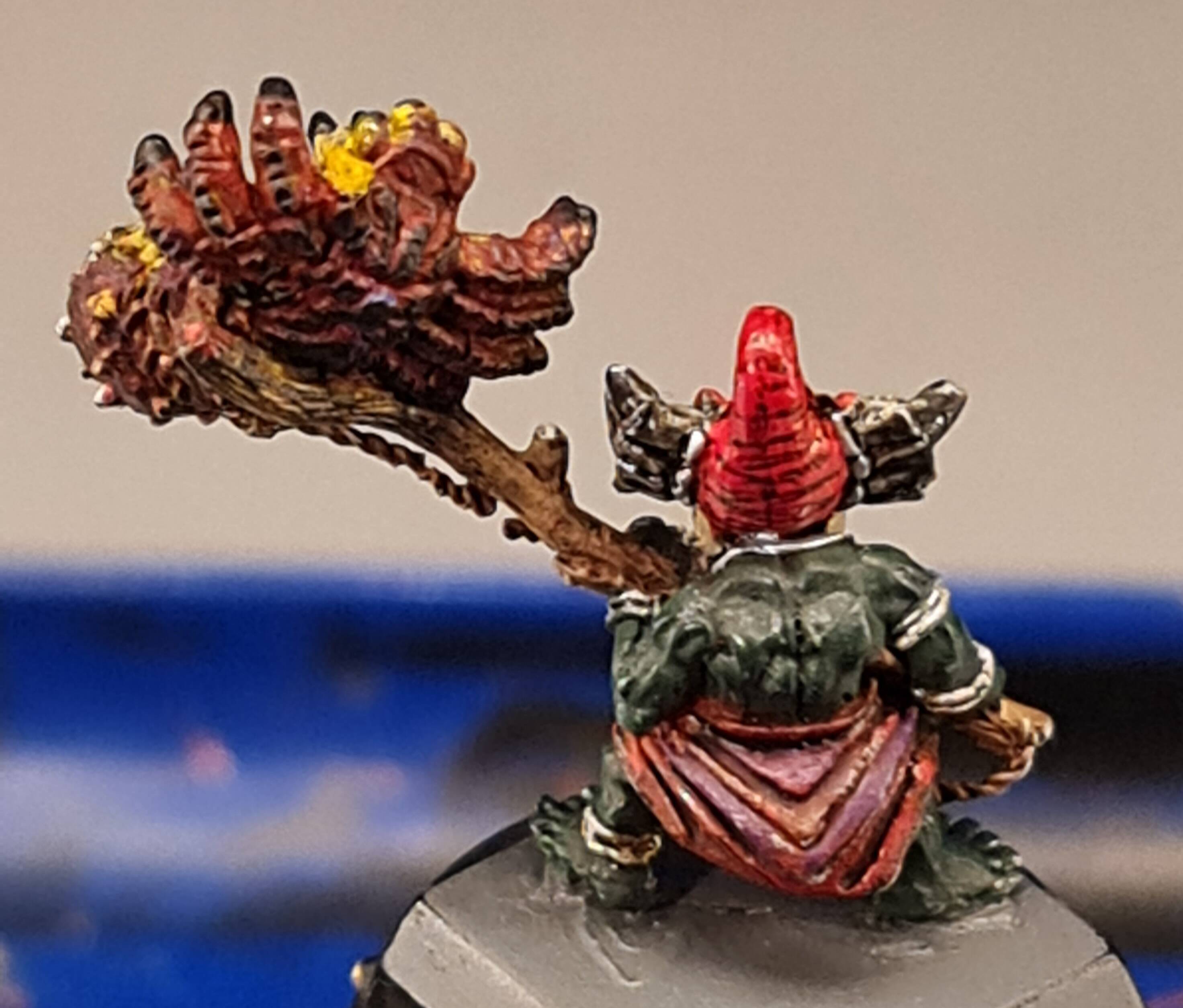 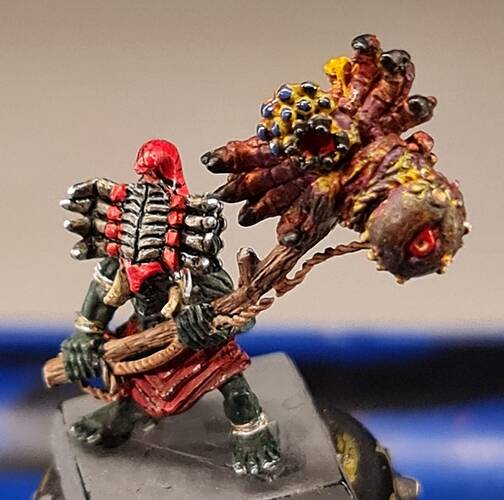 Pretty cool model, never saw that model before. Will it be part of a forest goblin army? Or just slaves for the cds?

Is that a facehugger from allen in his face??? Allen v chorf confirmed!

I got him during the yeah I’ll make a big Night Goblin spider army phase, so he’ll probably just end up as a part of any slaves units I paint. I haven’t painted a tenth of my Night Goblins yet and none of the spiders at all.
I never had any clue as to what he was, so once painted, I posted him on the Old School Miniatures FB site and they immediately identified it for me.

Here’s the link to them. Swamp Goblins - Chronopia World

Don’t mess with them if they use Face huggers as Hats.

Many many unsold Chronopia Swamp Goblin Mantis Guard are for sale on the market currently. Many more were made than were sold, which is part of why the makers Target Games went under.

Theyre easy to find for a reasonable price on eBay, circa 21 pounds for a box of seven including full command. They’re equipped with spears, although rarer, more expensive blisters of things like blowpipers and an insect-riding shaman and this fella were also sold.

They make great armoured Forest Goblins to mix in with a regiment and match nicely with others, with a particularly good champion with two swords.

Nicely done Sir. Always had a soft spot for Chronopia models. This is inspiration to get some of those in my collection painted up. Don’t have any of the swamp goblins, but great models. I like the colors on the Face Hugger hat. The finshed product looks very tribal.

Thanks everybody. I was really happy to finally get him painted. 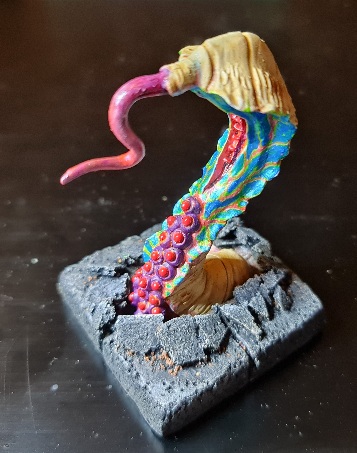 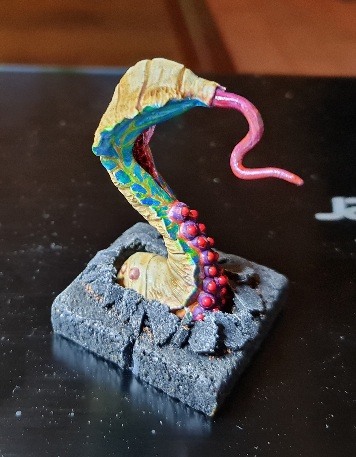 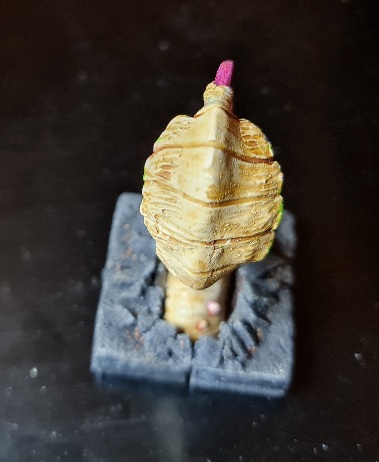 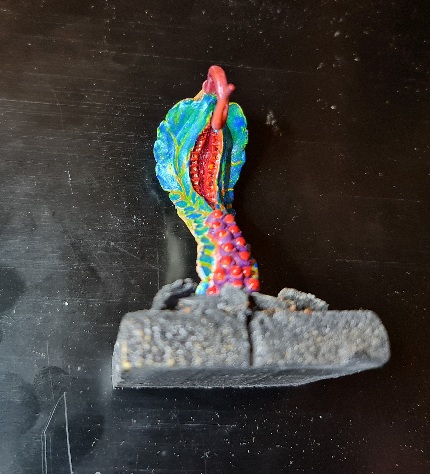 That’s a lovely beastie, suitable for all the nasty creatures of the Australian walkabout

Something else on the final leg of being finished is these AQMF Civilians. 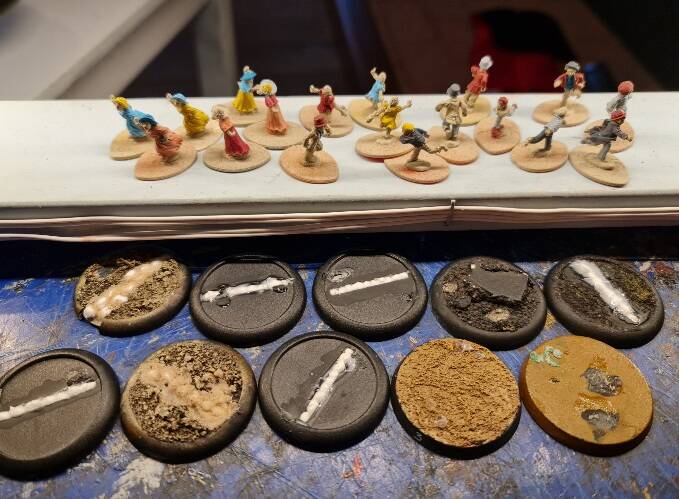 Somehow I’ve lost my previous posts about our local clubs " Monster of the Month" painting challenge. If I cannot find them I’ll have to re-post them. Anyway here is my Monster for April 2022. A Reaper Mammoth Centaur Lord. 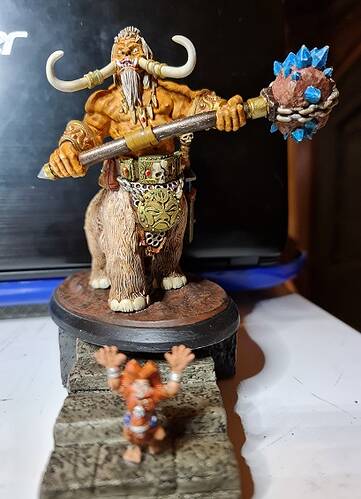 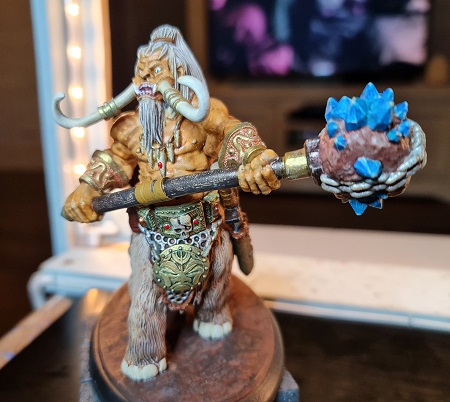 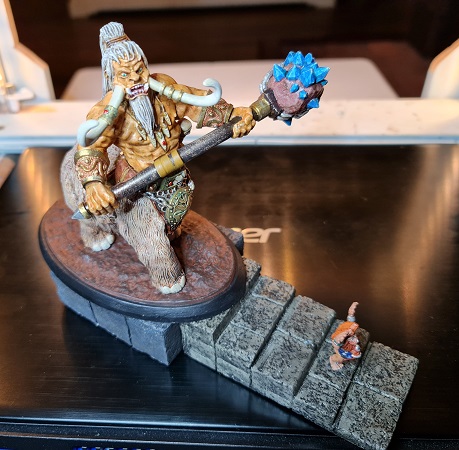 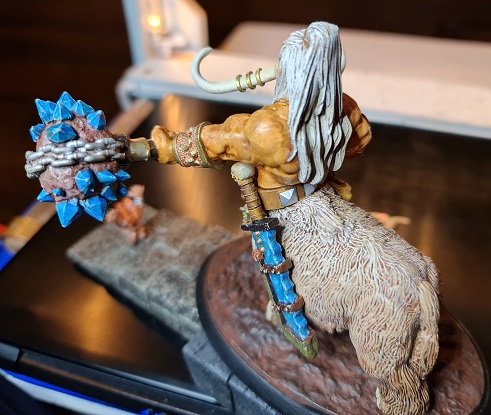 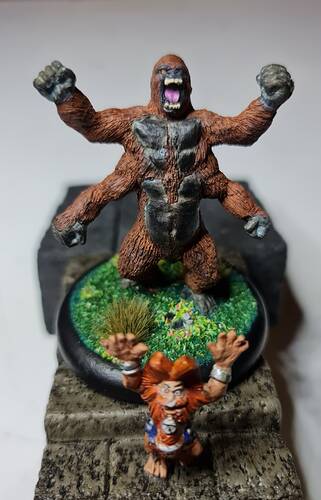 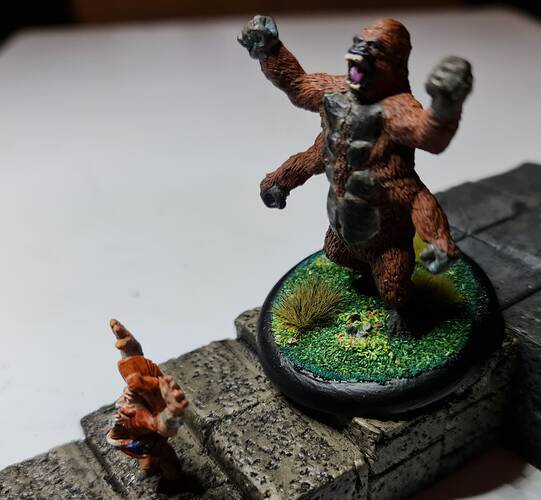 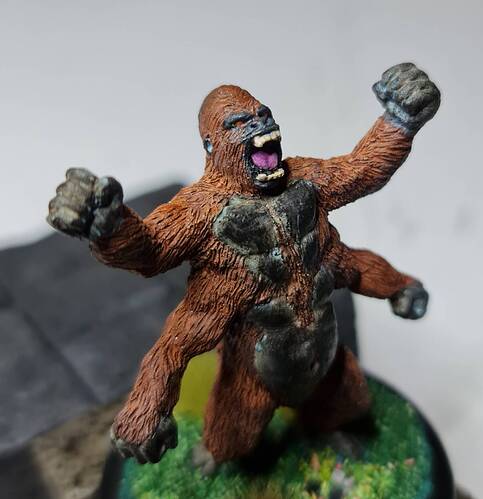 These monsters of the month are incredible! The ape is both hilarious and awesome. Great job on these!

Thanks. It is just a little local challenge that gets me painting something different.

My 2 latest Monsters of the Month. For June 2022 the Awesome and slightly bemused Thrud. 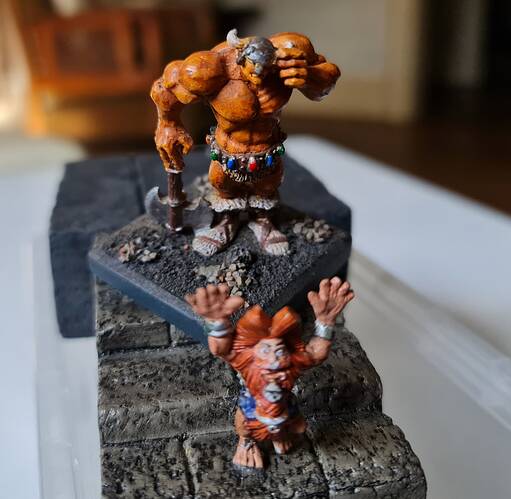 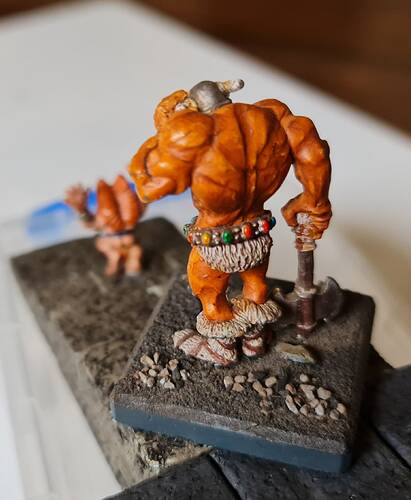 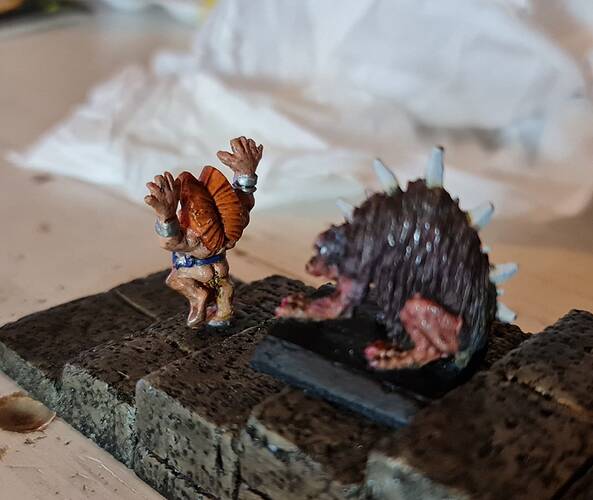 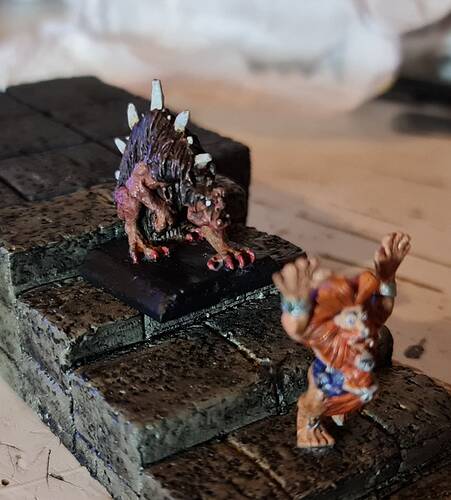 Love thrudd. Ill have to get one oneday. That troll slayer is one hell of a scaredy cat!