As some of you may have noticed, I’ve been slowly drawn into the world of Flintloque lately. I found myself toying around with some fun ideas for characters and stories set in that world, and what with one thing leading to another, I decided to set up this thread to document my doings in this little niche of my hobby – a catch-all for painted models, writings, scenario ideas, and everything to do with the system.

Of course, my shenanigans are centred around the concept of “evil dwarves”; to be precise, the dwarves of the City State of Stoutgart. From official sources we do not know much about them, but what we do know sounds interesting enough. For everyone who didn’t read it in the more general Flintloque thread, I’ll just re-post the relevant snippet from the “Bier & Bones” rulebook:

I’m fairly certain that we will hear more about these wicked dwarves soon, as AA is currently working on a campaign focused on the Monich Bier War. For the time being, I’ve used the great liberty granted by lack of official information to cook up some headcanon for myself.

As Stoutgart is part of the Confederation of Finklestein (the in-lore version of the historical Confederation of the Rhine), I used Finklestein Infantry models with some small-scale conversion to represent my Stoutgartians. In order to keep everything consistent with Flintloque’s peculiar style, I tried not to bring too many Evil Dwarf tropes into play. I did use skull badges, but these were used by military units of various nations in the 18th and 19th century, so do not mark their wearers as “evil” in the classic sense (although I do have an in-lore explanation for them, see below). The red-and-black I used for plumes, straps and the officer’s sash may feel like good old evil colours, but are actually also rooted in history, as red and black were the royal colours of Württemberg, whose capital was and is real-world Stuttgart (@Border.Reiver has already suggested this connection; also, a small nod to your home @Anzu

But enough with the preliminaries. Let’s get this thread started. I hope you have as much fun reading and looking as I have writing and crafting!

Driven to financial ruin by the loss of his slave-operated brewery in an embarrassingly small-scale revolt, former businessdwarf Diddik von Biern cashed in his last remaining favours among Stoutgart’s high society to obtain an officer’s commission in the army. Many were in fact relieved to see him change profession, his beer having generally been considered outrageous even by Stoutgartian standards. As an officer, Diddik could at least hope to retain his societal status as a gentledwarf; and considering that politics had been comparatively quiet in recent months, he was looking forward to receiving his pay while running only a small risk of seeing action. When the Monich Bier War erupted, his superiors were still much inclined to grant him that wish – mostly putting him on garrison duty in unimportant villages, preferably a long way from the rest of the army, where, so their reasoning, he could do no damage. But in the event, this sort of task served to bring out the very worst in Diddik’s already bad character, and the former slave owner proved to be exceptionally efficient in the handling of civilians and the troubles they occasionally cause.

Pleasantly surprised, Stoutgartian High Command decided to make the most of his obvious talents and tasked him with organising a new special force designed “to facilitate cooperation between the civilian population and our armed forces by such means as are deemed appropriate”. Diddik stipulated that a regiment of dragoons would be best suited to this task. High Command agreed – nothing but a regiment of dragoons would do, obviously, it stood to reason – but very regretfully added that with the price of war-pigs being what it was, the military budget did not allow for a new cavalry unit; and Stoutgart being only a moderately sized city-state with not much to go around in terms of manpower, the designation as “regiment” would have to be purely honorific, too.

Consequently, the Von Biern Dragoon Regiment is in fact a rather small body of infantry, and not one with a dashing appearance either – Diddik’s stubborn insistence on a custom variant of the standard Raupenhelm, featuring a skull badge for increased intimidation value, unfortunately did not leave much of a budget for the rest of the regiment’s uniform. Of course, any allegations that the Von Biern Dragoons are actually clad in “cheap raincoats with shoulder straps sewn on” are nothing but vicious slander. In any case, the zeal these soldiers display in carrying out their duties does make up for their lack in mounts, numbers and uniformity: Under their Colonel’s ruthless command, they variously act as garrisons, pressgangs, tax collectors, or simply a means of punishment for troublesome settlements. Diddik boasts that he has never yet failed to collect Stoutgart’s due – and some little extra for himself, of course. 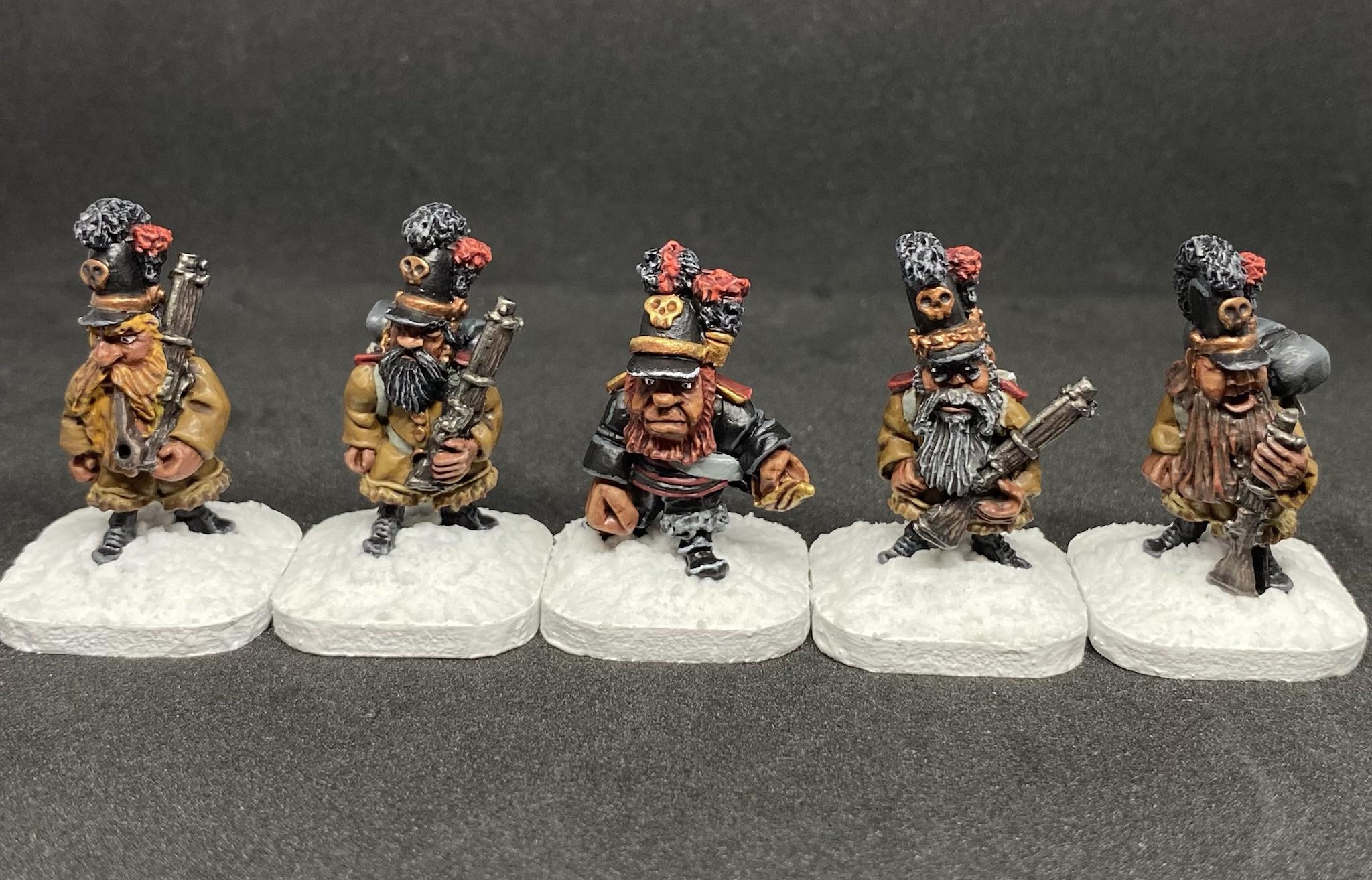 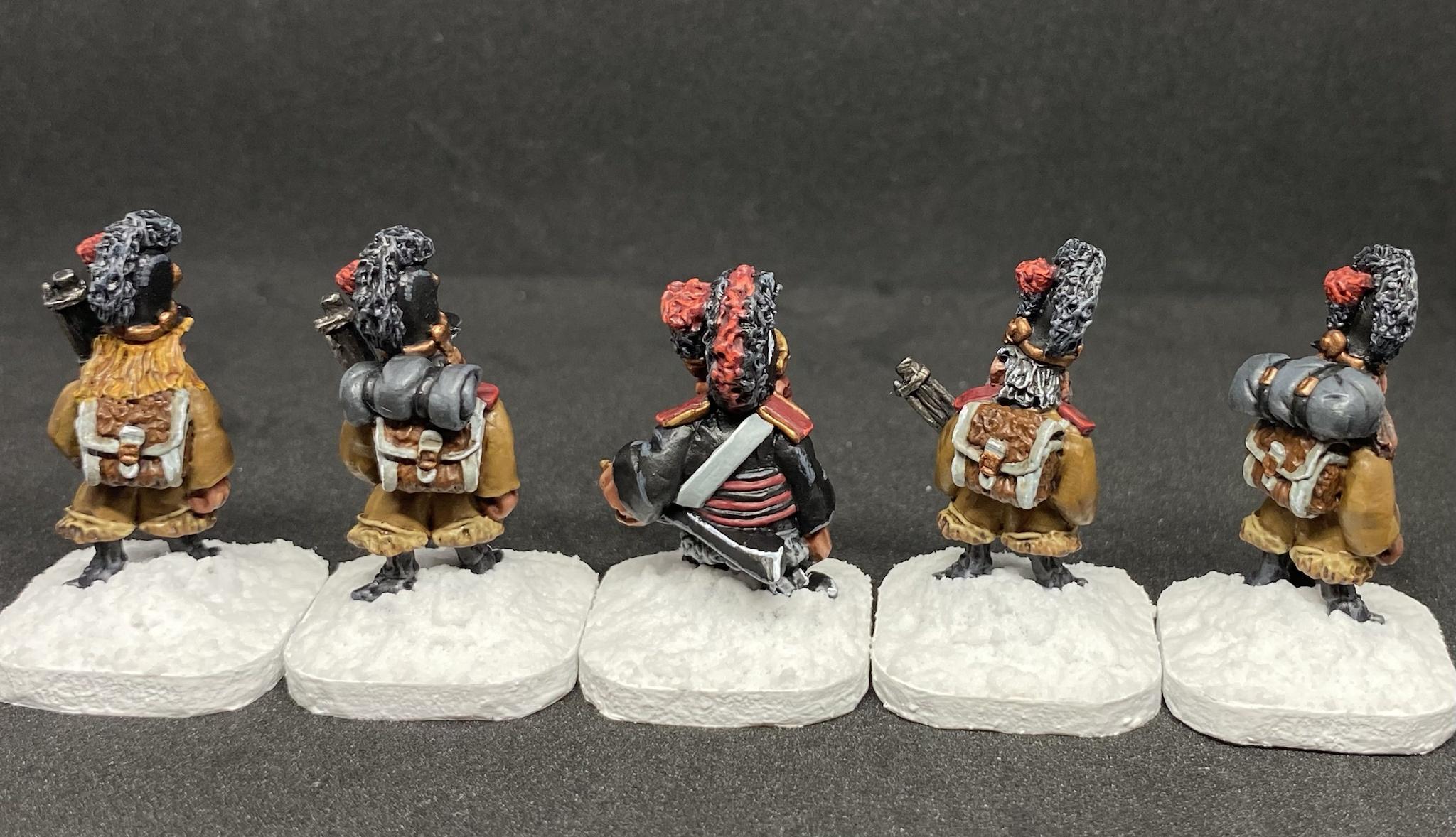 The Dogman Empire of Ostaria is the Flintloque universe’s equivalent to Austria, so I thought it might be fitting to use them as enemies for my evil Stoutgartian dwarves. In the end, I decided for a unit of Ostarian Jägers, as they fit the setting of a skirmish perfectly. Their “official” uniforms would be green, but I kept it a bit closer to their historical inspiration and made them grey with green badges.

Flintloque, as I understand it, is essentially about fun narrative play, so I scribbled together a bit of background to go with the models. It ties in with the short piece I’ve written for my dwarves and their dastardly chief Diddik, so if you’re interested, I suggest that you give that one a read first.

Not too lang ago, Captain Hasso von Flosterwitz had been the rising star of the Jägers’ officer corps. With the Ostarian military being what it is, the fact that Hasso was young, handsome, and of noble descent – in fact, the Flosterwitz family claims distant kinship to the Yapsburgs themselves – had of course helped his career along to a considerable extent; yet even his most bitter rivals were forced to admit Hasso’s extraordinary skill with the rifle. Having achieved a series of remarkable early successes on the battlefield as well as in the ballrooms and salons of Venna, the dashing Jäger seemed to be heading down the straightest possible road to glory, promotion, and several litters of illegitimate offspring, until the fateful day he was wounded in an insignificant border skirmish and taken prisoner by the dwarven slavers of Stoutgart.

Along with a number of other unfortunate dogmen, Hasso was patched up hurriedly by his captors, taken to their capital, and sold off to a third-rate brewery on the outskirts of that wretched city. Nobody has yet succeeded in persuading him give a detailed account of what he has suffered in the long months he spent toiling away in that hellish place. The only thing that is generally accepted as certain is that eventually, having gathered about him the most courageous or desperate of his fellow slaves, Hasso instigated a bloody revolt. Many dogmen died in the fighting, but so did many of the wicked dwarves, and under Hasso’s leadership a handful of prisoners made good their escape, leaving the brewery burning behind them and vanishing into the dark woods, the acrid reek of boiling discount beer agonisingly lingering in their snouts for days as they made their clandestine and fearful way home to Ostaria.

Hasso rejoined the Jägers as soon as his physical frame had recovered from his ill-treatment at the hands of the Stoutgartians, but he is no longer interested in frequenting ballrooms or salons. Together with a trusted company of hand-picked Jägers, he has taken to volunteering for every operation on Stoutgartian territory that might require stealth, marksmanship, and ruthlessness, always hoping to find revenge. He will never forget what those miserable creatures have done to him and so many others of his kin. He will never forget the boiling heat, the biting stench, the hateful sneers, the rolled-up newspapers. And he will never forget the face nor the name of that accursed brewery’s cruel master – Diddik von Biern. 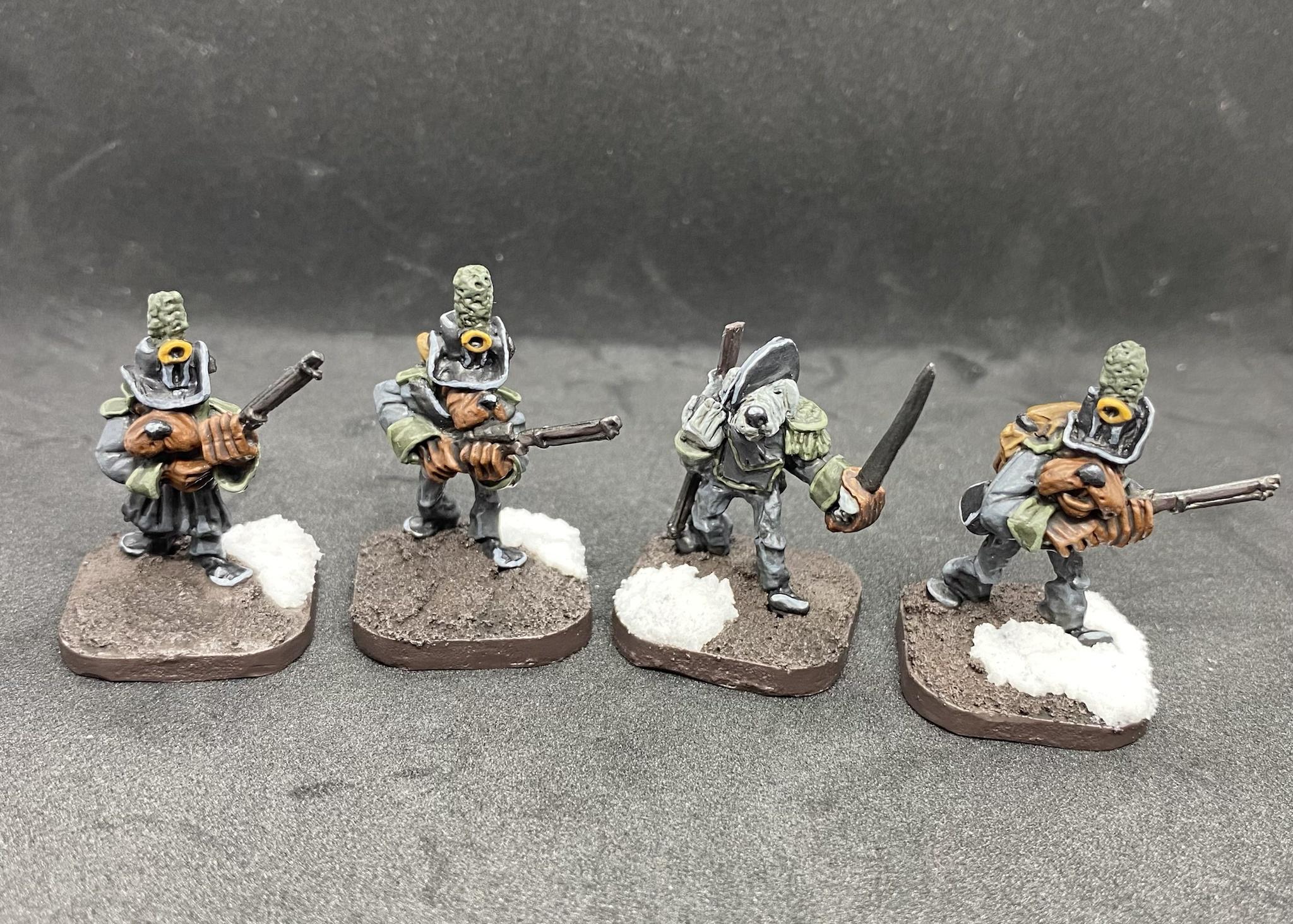 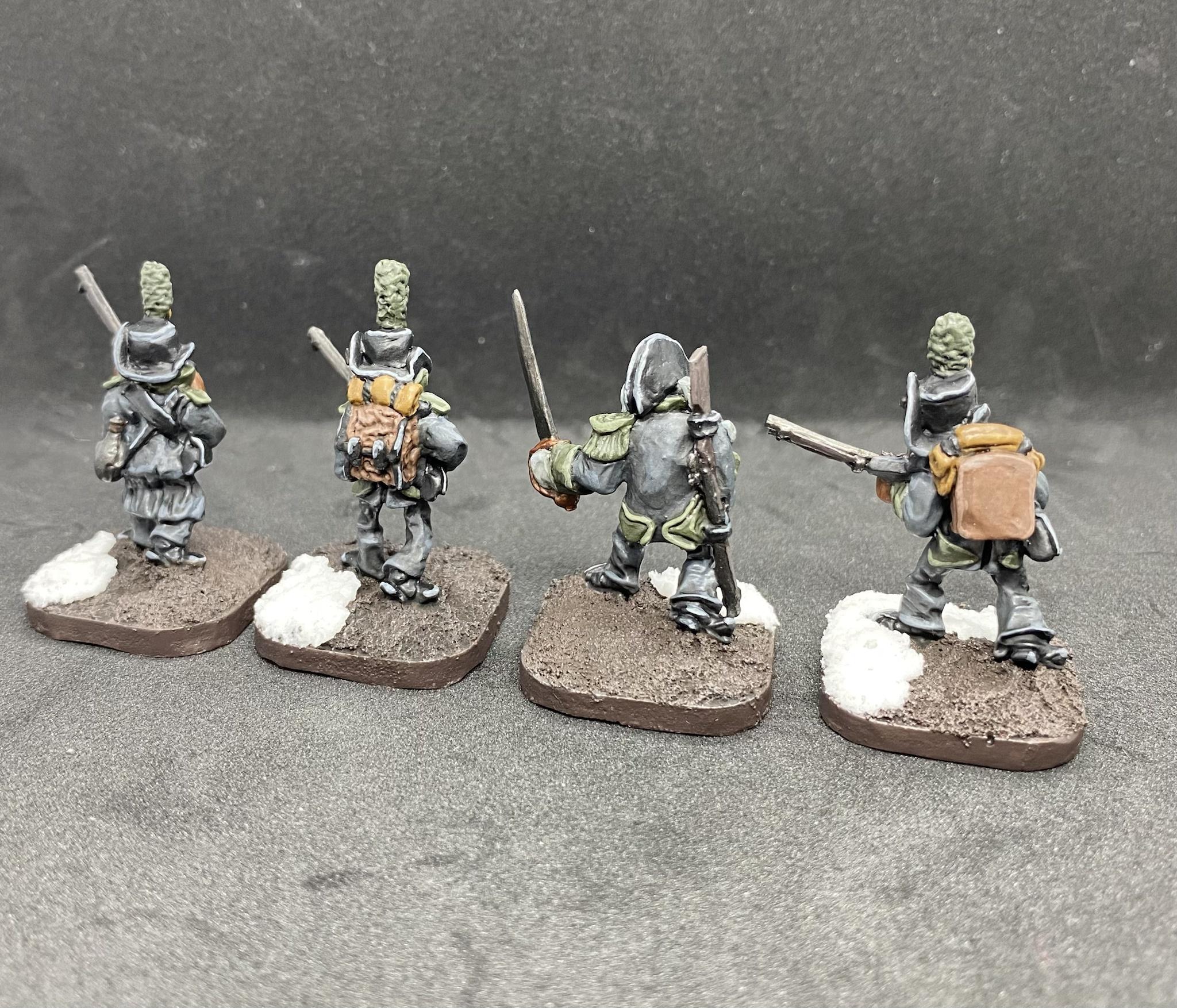 I fear I’ve let this side project fall by the wayside - these guys have been standing in a shelf with a basecoat on for months. The old problem with me getting wrapped up in a new idea and forgetting the stuff I should be finishing instead.

But with these four Dogmen and the dwarves from the last post, it is actually already possible to have a small game of Flintloque, which is what I would like to do one of these days!