So to prove to everyone (myself) I havent just been slacking off this past year not finishing my Chaos Dwarves I thought I would ho ahead and start a blog for my other projects.

A Trio of Lichs I painted up for a friend of mine who was just getting into Kings of War, all of them Reaper Miniatures, I’m quite proud of the conversion work on the two lesser Lichs as they where both originally the same reaper bones model! The big floating guy is his Lich King for whom he used the rules for Morgoth The Facless (he was a terror on the battle field!)

I also made and painted for him a Horde of Revenants with two-handed weapons, made from Mantic foot paladins and GW skeletons heads:

All of those undead guys are of course pre-lightbox so the photo quality is not super great but I’m still happy with them looking back on them.

My current project is actually a slew of commisions I’m taking for another friend of mine doing a Skaven Army for KoW:

A Warlock Engineer: This isnt actually what he looks like currently, he has sense been based and my buddy decided he wanted his robes in blue, still he looked pretty good when I shot this photo

These Rat Ogres have been a beast of a project, all of them are actually convered from the same Reaper Bones Giant Wererat model (picture below), they have been a monstrous amount of work. Soon I will have them completly finished but here are a WIP shots of the conversion build.

I imagine for quite awhile this blog is gonna be flooded with Skaven stuff as I have taken on quite a few comissions for them x.x but I’ll try to water them down with some of my Chaos Space Marine, Chaos Daemons, and Dark Eldar stuff as well.

Very nice. Yee have a wee bit of talent there don’t you laddie.

Thanks Guys :hat off

I’m glad you guys like them, my client is pretty happy with everything so far. Doing commission work (even for a friend) has been very strange, but it is allot of fun to get to paint and convert models I otherwise never would.

Here are the Characters I’ve done so far (now in the requested colors and based):

The Big Project as I have been thinking of it for the last month is finally finished, the elaborately converted Rat Ogres have finally been completed!

I will be showing them to my friend for the first time tomarow (err… later today, its very late), after putting so much work into these guys I’m really hoping he likes them.

The whole lot of them in one shot

Hope all these guys where worth the look :hat off

Great work. I don’t like these rat ogre models, but the painting, like with the two characters, is very good!

Lovely work. The purple warpstone looks good. And I love the wire work on the rat ogres!

I really like your paint job on the Warlock (and the others, though the Warlock really caught my eye). The Rat Ogre conversions look amazing. Well done!

Ditto. The detailing is excelent

Thanks guys :hat off

Much to my relief the client was really impressed with them, and very happy with the commission (and that much more enthused for having me do more). I never imagined myself basically painting a whole Skaven army, it’s kind of fun painting and doing conversions for an army I would otherwise have never collected myself, and I think it’ll probably continue to be fun at least for awhile.

Finally making a little more progress on my Skaven commission for my buddy, these are a troop of Scurriers (basically Night Runners with bows). The conversion work on these guys was actually a nightmare, their left arms are (where) shield arms which are completely fused to the torso so I had to saw and widdle off something like an 6th of the Hashut-blasted model.

Like my Hobgoblins these guys where converted with bits from Frostgrave Cultists (the Frostgrave miniatures are bits goldmines! lots of models with tons of options on the cheap I highly recommend them).

Suitable armament swap, and nice colours! I like the overall impression and the darkness, though perhaps a spot colour could make it liven up further?

Thanks I’m petty happy with them overall, and the client really liked them.

I always appreciate feed back, I hate to show my ignorance here but what is a spot color in relation to miniature painting? I tried to Google the term but didn’t have much success.

I’m guessing it probably means having a few bright colours to help emphasize the darkness?

Yes, one colour in the palette that sticks out. Often brighter than average. Red, yellow, orange, teal e.g. It’s usually just applied in small amounts i.e. to spots compared to the vast surfaces covered by other colours, but still changes the whole look of the model. Colour chemistry, eye interest.

Or the yellow on your own Chaos Dwarfs. Made a particular impression on the Priestess! Or the purple warpstones on the rat ogres you painted above. Perhaps also the scattered blue details on Fuggit Khan’s red, white and black Dawi Zharr. The red tongues and vivid lava bases for TheHoodedMan’s drably uniformed Hobgoblins work in the same way (with & without, despite WIP in the latter case). Differently put, modern military camouflage lack spot colours altogether.

Spot colours can sometimes lend themselves a cartoonish look such as with the green sash here, which is fine if that is what is sought for, but can also be used in a more restrained manner to make down-to-earth colour schemes pop. In the case of my own signature banner, painted by Forgefire, the glowing text and red topknot on the Goblin added a lot to the party, at least in my eyes.

Many colour schemes run on two colours, and one spot colour, since it’s an easy way to draw attention. In the example of the Skaven shown by you, glowing red or green eyes if even only on two of the miniatures, or perhaps some little orange or bright teal embroidery/clan marking painted onto the blue cloth on the humpback of a couple of the rats could help lift the whole regiment. Or perhaps just some scenic model shrubbery with tiny coloured flowers on the base to complement the rest of the scene. The purple bolt feathers and warpstone come close to do this (or perhaps they actually do IRL?), and the ratmen are fine as they are, so a spot colour is by no means necessary. Just tossing ideas at you if you’d like to experiment in the future.

Of course, a single standard bearer or character with some striking extra colour(s) could make all the difference for a whole unit. Spot colours can be used sparsely across a whole army to draw attention where one wants it.

White Dwarf articles often touched upon this, at least back in the day when WD was worth purchasing (and I think they still did when it had swamped down) and I’m sure they do once again now that quality is resurgent in the new White Dwarf magazine. Anyhow, just some food for thought.

Those eyes keep looking at me. I like them a lot

@Abecedar Thanks! I’ve always liked the whole “white pupiless eye thing” but it hard to justify outside of undead and daemons and such, but it seems to work for the Skaven.

@Admiral Thank you very much for the thorough explanation and links!

I will definitely want to keep it in mind moving forward.

staying on the topic of spot-colors I suppose the closest thing would once again be the purple warp-stone blades (which I am realizing now I did’nt get very good pictures of). However the color scheme the client ended up wanting this guy done in… well… its not my style. I find it over-all too colorful for my taste, red, blue, purple, gold, silver- its just a bit too much for me. Now I don’t think he looks awful, in fact any individual detail of him I am very happy with (I’m very proud of the gold armor, which turned out very nice I think), but all together it think he is just a bit garish for my taste. The good news however is he is exactly what the client wanted and he is very happy with how he turned out.

My wife (a professional graphic design artist) tells me these kind of conflicts of taste are very-very common anywhere ones person finds themselves doing something artistic for another person.

Old Skaven Jezzail teams, I must say I was not a big fan of these miniatures, I was also “improving an existing paint job” and had to figure out new shields since they where missing their originals. However once again the client is happy with them, and I am glad to put these rats behind me

I am finally going to put my Skaven commisions on hold for a bit and get back to Chaos Dwarves :hat

Hey guys! Figured I would update the old off topic blog just to prove I havent been sitting idle all this time since the tournament!

Here are some Dwarf Rangers and a Engineer 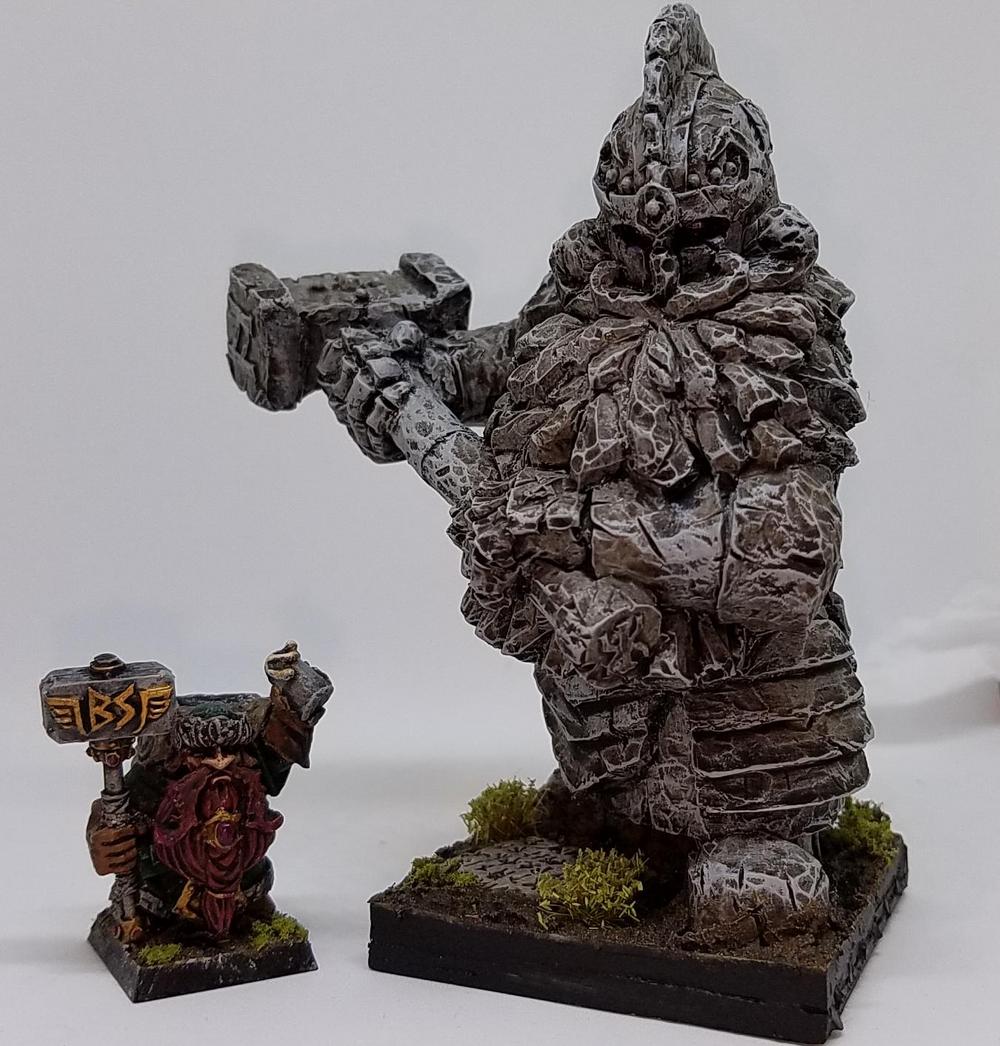 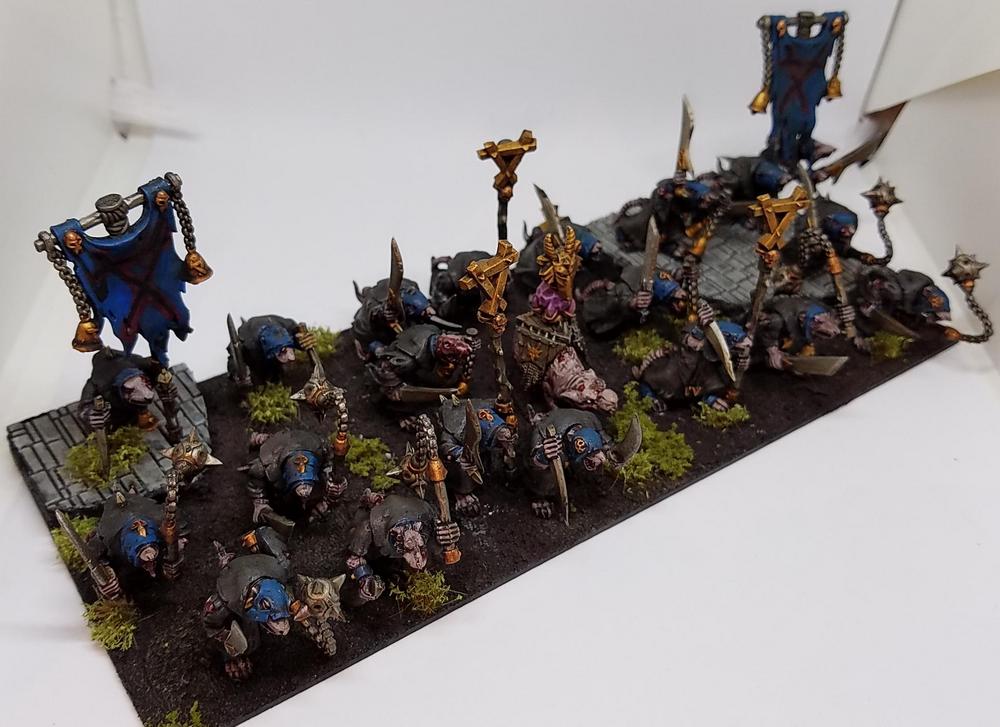 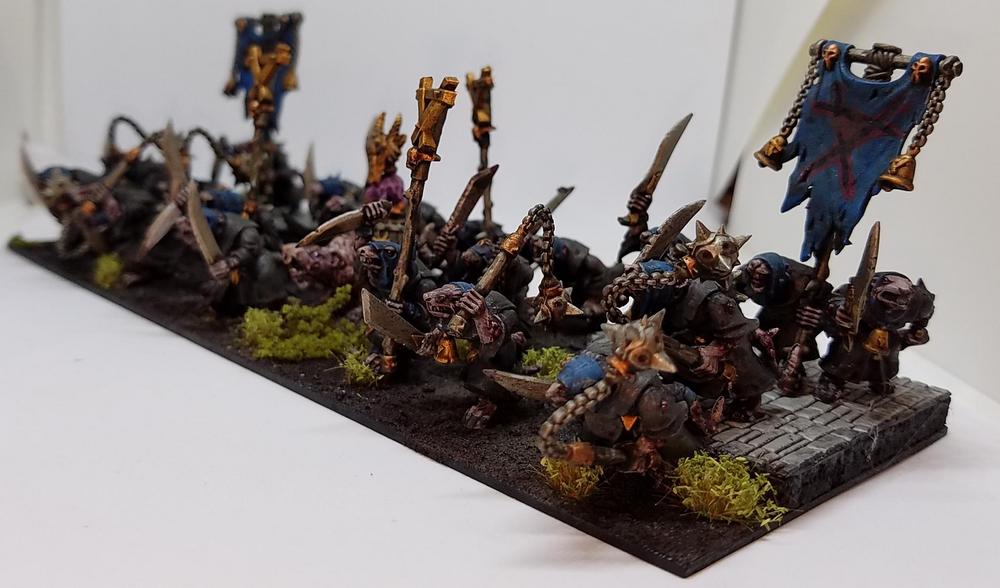 As I mentioned above I have done allot more Skaven and I’ll share some photos of them later to prove it :cheers

Great work, only pity is that its Rats and VD’s.

But don’t let that stop you from producing more.