With the release of Thommy’s new army book and the impending release of Baggronor’s Royal Guard, I decided it was time to have a second go at creating a Chaos Dwarf army. The previous incarnation of my army has taught me a lot about sculpting and casting, but I’m not too happy anymore with the look the mantic’s give. So, a fresh start!

As mentioned, I’ll be using Thommy’s book of the Chaos Dwarves instead of Tamurkhan. Tamurkhan’s army list doesn’t inspire me at all. Not from a modelling point of view, nor from an army-building point of view. The army list feels very narrow to me. I suppose it makes some sense, because it’s supposed to be an army list for a specific part of the Chaos Dwarf society, instead of representing the entire race, which Thommy’s book does achieve.

The current state of the army: 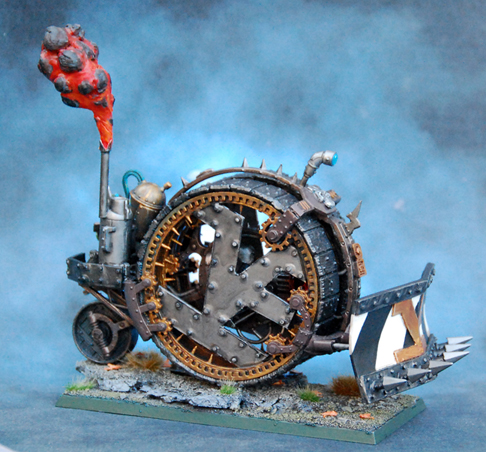 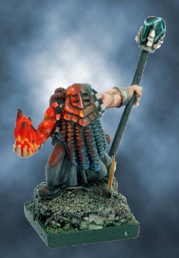 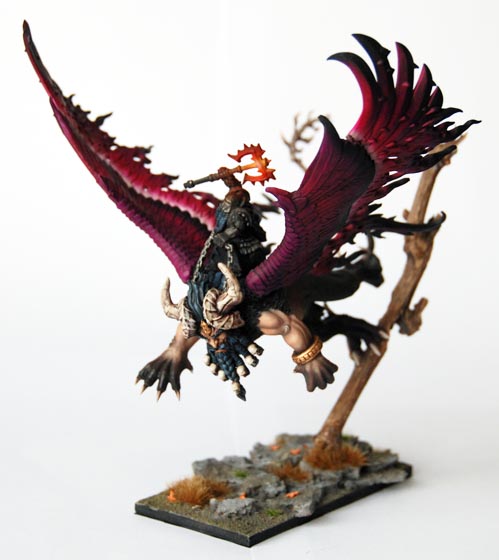 …which is why I’m doing a double-post.

For starters I’m working on a Daemonsmith piloting a Doom Harness. Traditionally, Doom Harnesses are used by Bull Centaur (the good ol’ Tenderiser and Whirlwind models), but some Daemonsmiths build steam-powered engines that are just as destructive. That’s what I’m going for.

It was very tempting to turn the skaven driver into a hobgoblin, as it would perfectly fit with my plastic Hobgoblins, but as you can see I’m turning it into a dwarf as was originally my plan. I’ve shortened his legs and trimmed away any non-dwarfy stuff. I would prefer to use a different (smaller) head, but I don’t really have any other options. Perhaps I can steal an Avatars of War beserker head from a friend. Does anyone know if that set has extra heads?

That’s it for now! Opinions, criticism and ideas are all more than welcome.

interesting with the doomwheel.  can’t wait to see how it turns out.  gonna make it less wooden looking? But seriously: if there’s one thing that really inspires me, it’s collaboration. That bit in the Doom Harness’s fluff was put in as a reference to the Skullcracker and, as recently as today, I questioned its inclusion. But now, seeing that someone has gone to the effort of using that paragraph that I wrote as a jumping-off point to sit down and build and sculpt something that is beyond my abilities to create, that is beyond my conception of what the unit might be…well, it makes it all worthwhile.

So thank you. I’ll be watching this blog very closely.

To be fair, I simply wanted to do this conversion first and looked for rules to suit it. The conversion idea has been in my head for at least a year or so. Initially I wanted to field it as a Daemonsmith on an Hellborn Construct, but I couldn't really customize it in the way I wanted to. I would've liked to give it Thunderous Charge (Impact Hits) and then maybe add Whirling Blades (Random Attacks) to represent a buzz-saw or such, but that's not possible with a Construct. An Infernal Engine can do those things, but it defeats the purpose, because it would become to "massive" and "hulking" instead of a ramshackle, barely controllable machine that you really don't want to be standing in front off.

The Bull Centaur Doom Harness' rules fit my picture of the machine perfectly. The random movement suits it really well too. And when I then remembered the fluff hinting at Daemonsmiths building such engines for themselves, all the pieces fell in to place.

Having said all that, I might field it as a Hellborn Construct sometime anyways :hat off

Now, I want to attach different equipment on the front of the doomwheel. I was thinking a buzz-saw or maybe a flame-thrower, so I immediately turned towards 40K Orky bits (or is that bitz?). To my surprise, I found out that my go-to bits store doesn't have crap-all when it comes to such things. I always use Hoard-o-Bits, but they seem to stock less and less each time I look. Can anyone recommend a different reliable bits supplier?
Also, any comments about the scale of Ork Deff Dread and Killa Kan parts would be welcome. Is a Killa Kan basically the size of an ogre?
system 3 March 2012 12:01 #7

interesting with the doomwheel.  can’t wait to see how it turns out.  gonna make it less wooden looking?

I’m considering doing that, yeah. There’s not an awfully lot of wood on the model though, it’s mainly or almost only the wheels themselves. I’m not sure yet if I’ll “convert” them into metal plates (=getting rid of the wood grain) or just paint it as dark/black wood. I was thinking it would actually be kinda neat to have tank-tracks, but that may be a bit far-fetched.

Anyways, progress has been made. I’ve sculpted the scalemail on his other side and replaced his head.

I originally didn’t want a helmeted head. I wanted to do a head with goggles, but I don’t have a suitable head and I know my own limits - I can’t sculpt faces.

Looks awesome so far. You can actually have Whirling Blades on a Hellborn Construct though, btw.

I think I’m gonna turn one of the warpstone lightning rods into a flame thrower.

If you use it as a Hellborn Construct, you could use it as a count-as Hellfire Pistol for the Daemonsmith.

That is a great idea,will be stealing this idea now

Bit of an old thread (was it really that long ago!?). But I did a computer mock up of a CD doomwheel thing you may find interesting:

If you use it as a Hellborn Construct, you could use it as a count-as Hellfire Pistol for the Daemonsmith.

I was thinking something more destructive. A mobile flame cannon; fast moving, can spout a flame template every shooting phase. That's actually pretty much what a Gyrocopter does, isn't it?
Your book clearly doesn't have enough options, Thommy :hat off

That is a great idea,will be stealing this idea now

As long as you share pictures when you get around to building one!

I call Shenanigans !!! you may not steal an idea Unless your a pirate!!

Unless they Ask or Pay one Kera Foehunter a settlement …

We have a high value on our post here.

For the sake of thinking out of the box…:

Or with a quick photoshop:

It makes me chuckle. I’m not sure if that’s a good or a bad thing.

just spitballing, but would liquid greenstuff make quick work of making the plates sheets of dented metal instead of wood?

That’s what I was gonna use, yeah, along with some filing to get rid of the skaven runes on the wheels.