For some reason Comics and Warhammer dont really mix for me, so the main reason I havent been working on my Army(blog) is that i’ve been putting my spare time in my other hobby: drawing Bunbuns.

Its a side project that got a bit out of hand the last few years and there have been a few small successes. Besides comics i’ve done quite a few animations but it all started as a few stickers.

So instead of painting more Chaos Dwarfs at the moment I’ve been working on new comics, buttons, stickers, bugging publishers, a new animation in a new style and T-shirts.

all the comic can be found here: Bunbuns.

Please let me know what you think of them.

Oh and a final note: inspired by all the brilliant model making on this forum I’ve tried to make a Bunbun figure from putty, unfortunatly my sculpting skills suck. 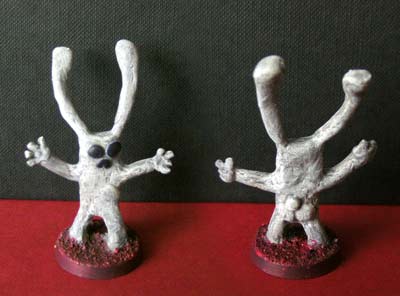 And now i’ve finally finished a new animation. its a sendable ecard for a competition…

Bunbun - Lets Get Together.

Great comics mate, really like the style of the art work and the stories are great, keep them coming

Thanx guys, I dont update on a regular basis but I’m working on it so i’ll keep you posted here (:

There is a new animation online here. (click the apple with a “2”)

And last weekend I participated the 24 hour comic day (for the 5th time). On the 24 hour comic you try to draw a comic story of 24 pages within 24 hours. here is my result. (dont click the link if you are religious and easily offended)

wow these are great!

bunbuns should eat some sugar buns.

They are really good, the animation is crisp, i love the style as well :hat off

I had a meeting with a publisher today. and it looks like we’re going to make a Bunbun comic book, a real one, no online printing or smallpress. I’m quite exited (:

Thanx. I’ll keep you guys updated it there are mew developments.

(for now I’ve started redrawing and recoloring old comics., and some new stuff of course)

and this is how the reworking looks:

I’m having oodles of fun redrawing and reworking the comics (:

Still very busy with My first book, more news about that very soon.

Jup, it a recurring theme saving yourself with pee (;

Well all the dealings with my publisher are behind me, The album is going to be released end of March.

there is only one small thing I have to take care of, I Need enough confirmed orders or the whole thing is going to be cancelled.

So I have to do a little spamming, so I quite sorry for that it you’re offended by that. But If you got some cash to spare and like my comic please help me by buying one.

International orders can be placed here.

But if your dutch you can order here.

I Promise you I wont be the most useless thing you will buy in 2011.

And if you think you’ve read all the comic already so there’s no need to buy the book, there will be loads of new stuff in the book and all old comics are either redrawn or reworked.

Oh and if you order one and also sell your self made (Chaos Dwarf)miniatures online, drop me a PM, I will return the favor.