And a small example of a revisited comic:

I’m doing this and more for all the comics that are in the book but are not completely redrawn.

(and that takes quite some time to)

I must say, that they are great - very very funny

And if you really want to help, pre-order one (:

3 redrawn Bunbun pages for my book:

And a fresh comic online:

So I have to do a little bit more spamming, so I quite sorry for that it you’re offended by that. But If you got some cash to spare and like my comic please help me by ordering one.

International orders can be placed here.
But if your dutch you can order here.

Your help is appreciated (:

Oh and if you order one and also sell your self made (Chaos Dwarf)miniatures online, drop me a PM, I will return the favor. 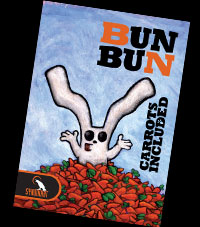 Hey dude preorders are made! :hat off

I hope it will be a brilliant comic - otherwise my I will get a lot of trouble with a friend of mine - a great comic lover!

And I do hope your friend will like it too, but I get a lot of hits from Germany so humor wise that shouldn’t be a problem… not that all Germans are the same ofcourse (:

How long must we wait for the release?

If all goos well the album should come out in march. So you dont have to wait to long (:

Is there any progress concerning the release of your Bunbun Comic?

Jup, this week I heard that there will most defiantly be a book (it was a bit to exiting the last few weeks for me) But the release is postponed until april because of trouble with the printing.

Glad to hear that your project is “still alive” and that there will be a release soon! :cheers

@Zanko: Thanx! me to! I wanted to bring the good news here as I uploaded the new comic, but ist not finished jet as the Orc and Gobbo army book keeps me distracted all the time (;

@warh Lol (: order my book and well have more of the same stuff d:

Any news about the comic - Bolg?

Sorry Late reply, I was on road trip to spain (:

Just got a reply from my publisher, as I asked the same question. the file is at the Printer. But my publisher is already waiting a week on a response from the printer. As soon as I know more i’ll start shouting it all over the interwebs. It should be this month… but I’m keeping my fingers crossed.

Great work dude. It is not really my style, but I can see how they would be popular.

I really like the “urban” stickers - now they were GREAT!!!

Keep on being creative, and I hope that you sell LOtS of books.

Thanx dude. It all started with the urban stickers (thats were Bunbun was born) so I will not stop that (:

For now i’m waiting for my publisher to contact me tomorrow, I should get an update about the release date and stuff. bit nervous as a college who’s book just came out told me there are some difficulties at that printer…

The 26 of may should be the definite release of my album. (yeah, finally!!!)

Here is a fresh comic online

(and dont forget you can still order your signed copy here)