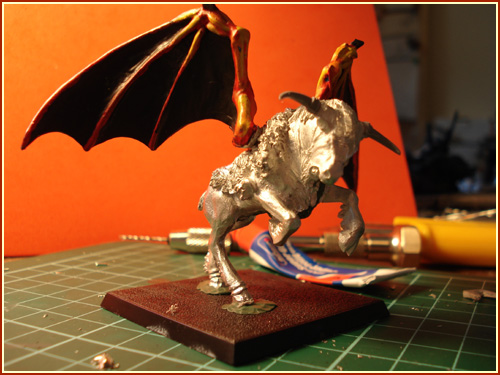 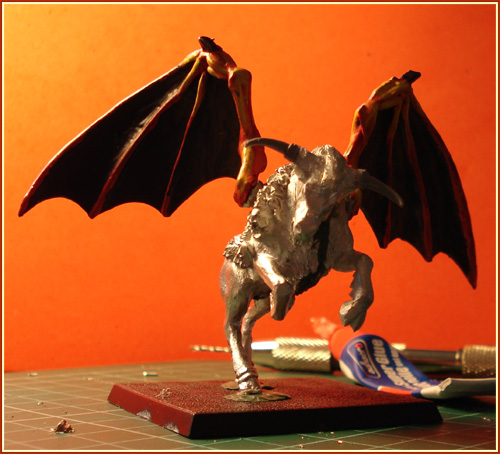 Work in progress. Still have to add more GS, make a fancy base, etc. Just thought I’d snap some pics before work today! CDO is back baby, I bought this stag to celebrate it!

Comments welcome, but I need it done by Sunday. 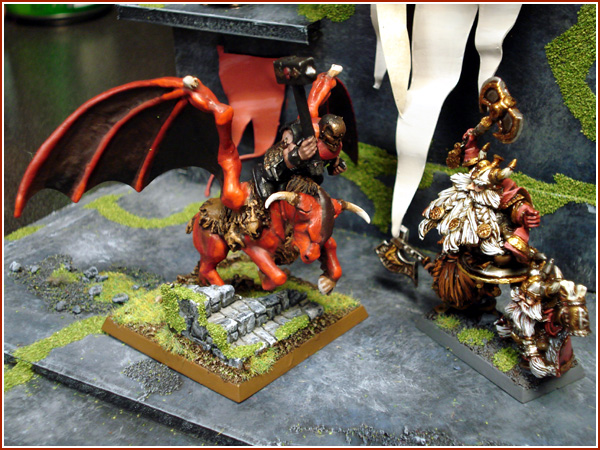 That is awesome mate! I wish I could convert like that.:hat off

How big is the stag? I’m still planning on using it for a Bull Centaur lord, but I haven’t seen one in my local stockists.

The Stag is just slightly taller than the Earthshaker. I use the Stag as my Taurus but he has Tyranid Gargoyle wings.

I think you should shave the claves of its legs (oh god, calves of a bull…), Do something with the fur, even if it’s just painting it as fire/smoke. Maybe (MAYBE) put a ring in its nose. What did you use for the horns?

Where did the wings come from, they look great (along with the rest of the model:cheers)

The horns are from the Chaos Warrior Banner, and the wings are from an old Cockatrice model. I will be adding some more green stuff and a mount tomorrow morning.

Thanks for the comments guys.

The thighs will definitely need some upgrading with GS. For a bull, the stag model is a bit too slender. Add some muscle mass here and there - it will make the whole model a lot more impressive!

Those wings fit nicely, BTW. What model do you intend to use for the rider?

Really awesome model! I personally think the fur looks pretty good, and the model certainly looks a lot more 7th edition (i.e. a proper monster and not just a funny cow with wings) It has a kind of Daemon Bull look about it. Don’t forget also that the flesh hounds have all that fur around their necks, but none on the rest of them, and that looks fine. I also think the legs look pretty good, infact the only thing I would change is to add a rider![/align]

I dont know if i should try this, or try somthing with the Juggernaut of Khorne. I really like this, im just no good at sculpting muscle … yet

Come on xander shake a leg, we need updates!

PS: ingrown your signature is so true…

Updates in time, working on some more Hobgoblins at the moment.

Funny, I had gotten on to ask if you had any updates. I am thinking of trying a similar conversion (inspired by you of course).

im thinking of trying this but would a juggernaut be better?

Looking forward to see the update.

jester, it depends upon your theme to be honest. Mr. Xander, when is this beautiful beast going to get a new rider?

thats a great taurus do you mind if i steal your idea?

I’d be honoured if you did just that, as it was not my own idea to begin with, and that’s what these forums are for: sharing!

That is one nice taurus. Wondering if i should make mine based on the stag or try to build it from the scratch.This would be easier and more probable to become decent tahn the scratchbuilt. Well, I’ll decide after i’ve finished my GH entry

Try both, whichever one you like least make into a Golden Statue for altar sacrifices!