Looks so good! Very striking with the blue beards as well…

They look great! The golden tone on the arrows is perfect

Thank you for your kind words.

Here is the new unit, blunderbusses. They were in dire need of a rehab! Color chipped, bases broken, even some metal parts bent.
I decided to rebase them and add some new recruits thanks to @Loidrial and @Fabelzel
I also had a lone musician, never painted, he deserved a paint job after so many years 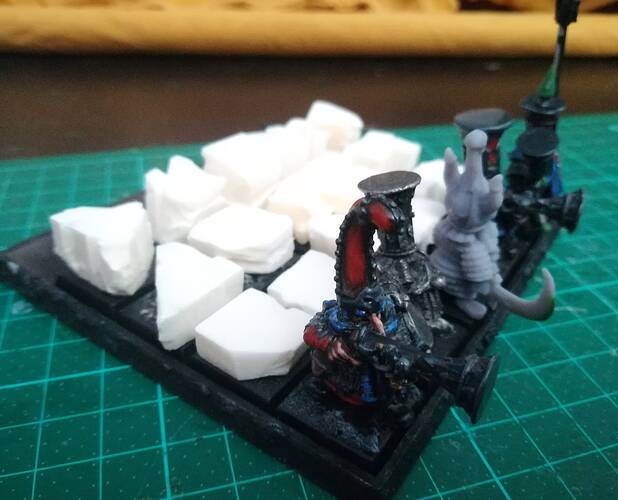 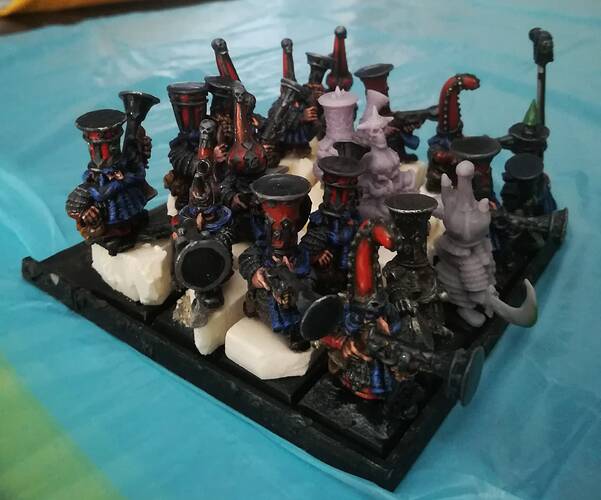 And here the unit completely renewed. I decided to give them a completely new banner. I choose a super classic design from the 5th edition manual. It’s 100% freehand, of course, no decals for me.

ok, only the veterans will understand it’s a joke 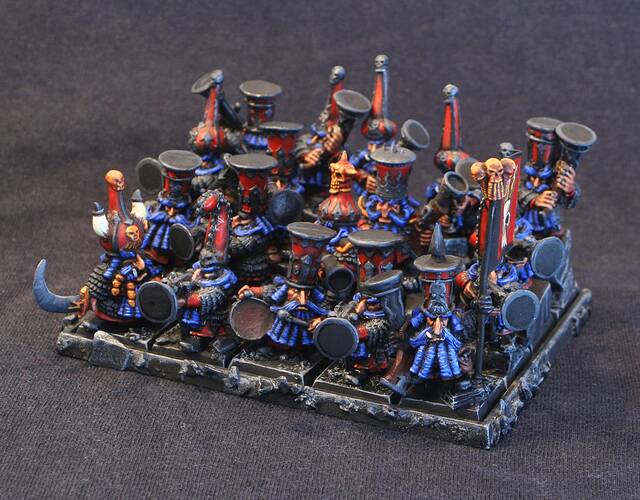 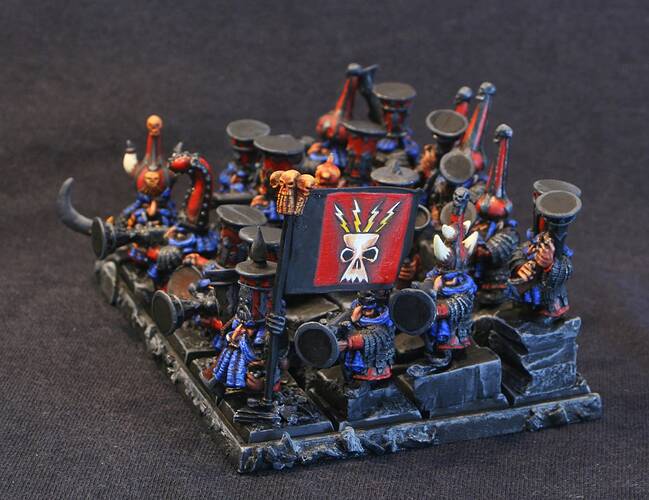 Beautiful unit, nice to see how seamlessly the different miniatures all fit together.
I’m especially impressed by how well the stacked bases effect is, very well done.

Some action for the Blunderbusses 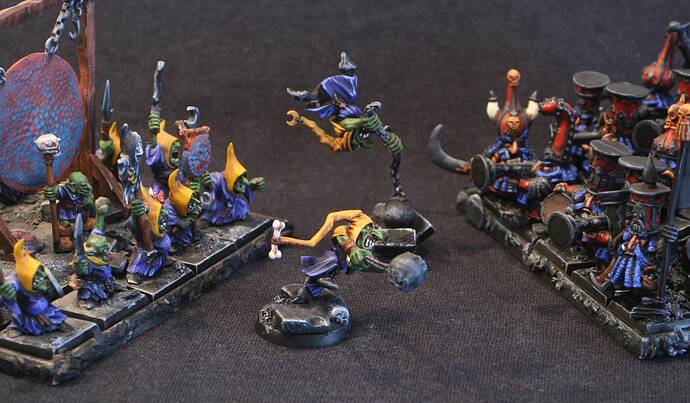 These days I see a classic big hats bonanza and I cannot miss it!

So let’s share a picture of all my Chaos Dwarf unit banners I painted so far. 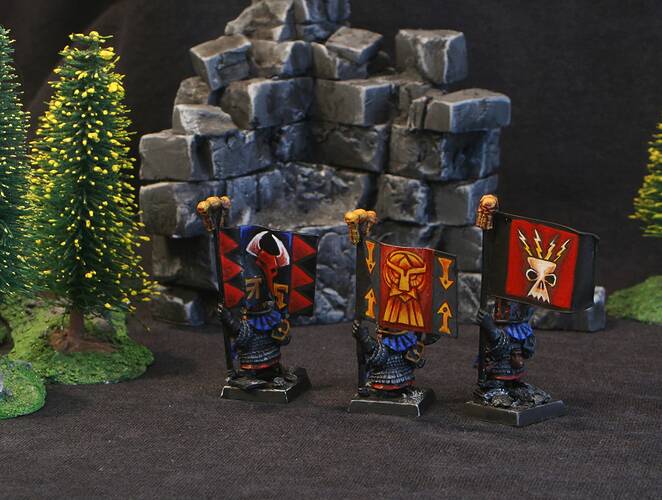 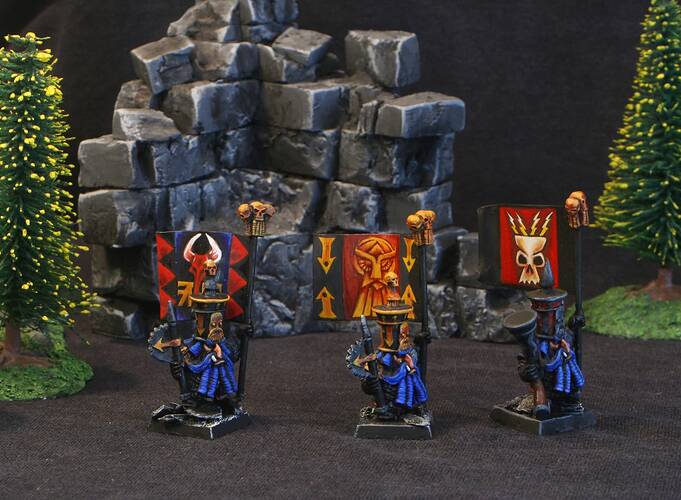 Nothing new to see here, just a pic for fun and a little story

Snarrik, commander of the wolfriderz, believed to be the smartest hobgoblin.

“I’ll show them what I can do, today my dumb masters will recognize my tactical genius!”

He moved his wolfboys around the battle front. With a big loop (far away from missile fire, magic and every possible danger…just in case) he took cover in a wood just to jump behind enemy lines. He spotted the weakest point of the greenskin horde the Chaos Dwarf army was facing. Not the Black Orcs (of course!), not the orcs (not in the right tactical position, of course!), not the Orc Boar Boyz (my wolves have problemz with those pesky pigs… of course!), not the Trolls (c’mon who want to fight covered with stinky vomit? sorry), not the lumbering giant (he has problems of intimate hygiene, even worse than ours…) but the weak fragile Night Goblin unit (by the chance they were the closer and in the optimal position for a charge…).

“I’ve done it! Let’s show everybody my tactical genius. Boyz, yes including you, Grizzit and Jazzik stop fighting, let’s show them what we can do!!!.. hey, just a moment, what are those two guys with the big iron balls popping out from the goblin unit!!!”

It seems that Snarrik’s tactical genius though about every detail but one: fanatics!!! 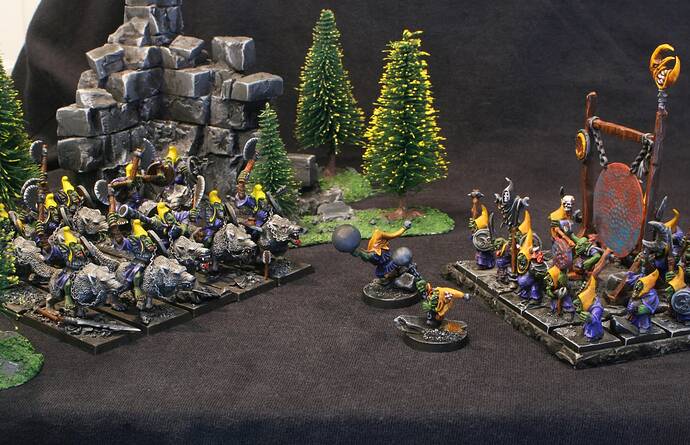 I’ve had a bunch of them since the beginning of my adventure into Chaos Dwarfs but missing a couple of them. Now I have all of them, so time to give them a refresh and form a new unit. 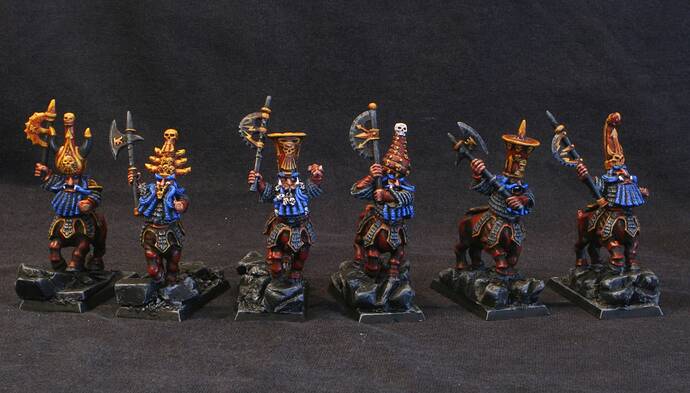 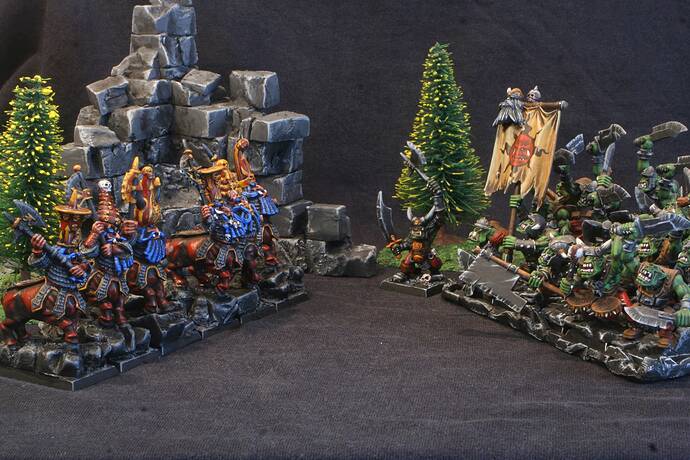