Chaos Dwarf Radio The Brazen Broadcast #4 An interview with Sotek the Loremaster!

Welcome to the fourth episode of Chaos Dwarf Radio. Oxymandias, Chitzkoi, MichaelX and Reaver interview Loremaster of Sotek about his views on TWW3 and the role chaos dwarfs could have in it, give our thoughts on how this all relates to TOW and we review some good GW kits for conversions and bits sources.

Beat your Hobgoblin slave into submission, throw a few Daemons on the fire, down tools and join us as we talk all things Chaos Dwarf!

If you have any feedback for the show, ideas about what you’d like to hear discussed, or want to submit something to brazenbulletin@gmail.com

Was just logging on to make this post @MichaelX . Thanks mate haha!

Excellent as always guys, superb ambassadors for our little community

Great work! A bit sad that chaos dwarfs probably wont show up at release in TW3 but i can wait a little longer i guess

i can wait a little longer i guess

Waiting for a release that may never happen. The chaos dwarf fans lot in life haha.

Finally finished and wow so much great content. Looking forward to the next instalment

I’ve got a lot to catch up on (busy restoring bathroom roof, laying floor and painting planks these days), but I checked out the first ten seconds after intro music. @Eisenhans ’ Grey Seer is apparently famous.

Really enjoyed this as always, top notch work. You’re all doing great things for the community and we thank you.

Another great episode, friends! Really nice conversation.
So I was wondering about what the future holds for Chaos Dwarfs in Age of Sigmar, Total War and The Old World. What of the things you discussed with Sotek and in our community is fantasy, what’s rumours and what’s confirmed?

I think most total war assumptions are based on where the maps are now headed. Ogre kingdoms and Cathay are confirmed. The old world itself (as in the empire and Bretonnia etc) will be included. Would be hard to not have the dark lands explored.m as it’s geographically in the middle

Regarding TWW3, the Chaos Dwarfs are confirmed in that “every faction that had an army book” will be in the game, and factions with less (Norsca, Vampire Coast) are already in. We’ve now seen a map that has the dark lands in it with chaos dwarf named settlements.

Regarding TOW, we have the least of the three to go on. However what we do have is this: 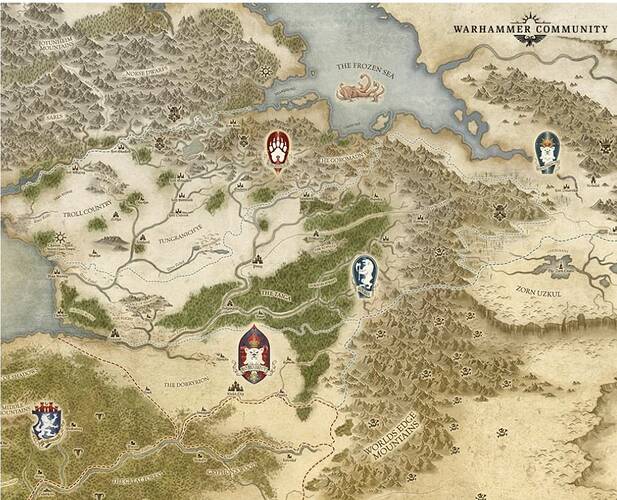 The Kislev map. It intentionally veers off to the east, passing the traditional Old World barrier of the World’s Edge and explicitly showing the Dark Tower as a named settlement.

So, at the very least, the Old World will fully acknowledge our place in relation to what is likely to be their launch range - Kislev.

Regarding Oathbreakers, to be super clear, the source is the same as the source that called other things correctly like the Hobgoblins in the Dominion Box.

Thanks guys, just wanted to make sure. We’ve been hurt before

I really enjoyed the interview, I was happily surprised to see it happen, having had followed LMoSotek while he was doing his Chaos Dwarf Q&A videos, I think a few others from here were following them too, as I(Erik the Red) wasn’t the only one throwing some lore down in the comment section

I think you guys are onto something here. These YouTube guys def draw a crowd. Maybe more collabs would be a good idea!