Your blog should be titled. Denelian performs delicate surgery but doesn’t put things back where he got them

Too much to say here, inventive use of parts down to the smallest detail amidst some truly massive creations. I always love seeing servohauler kitbashes and again the surgical fits yield a seamless result that is perfect Chaos Dwarf daemonsmithery.

Your work is absolutely fantastic, @denelian5! I’ll be stealing some of your ideas for sure

Your blog should be titled. Denelian performs delicate surgery but doesn’t put things back where he got them

Yeah that might be an appropriate title. ^^
Or: "denelian5 - The worst daemon surgeon ever"

That’s high praise from one inventive kit basher to another, thank you! I don’t remember exactly how I got the idea for the Brimstone faces since I made the first three more than a couple of years back… but they are a good fit with the BFSP dwarfs.

Slightly on the large end, but you know they are daemonic so that’s ok. ^^

Thank you! Feel free to steal as many ideas as you want! Just don’t finish painting them before I do…

Wow this conversion work is more than impressive, such a nice thread to read though it’s incredible

Thank you so very much! I’m getting to the point where I’m soon running out of units to prep, then it’s on to painting!

'Til I decide to buy more units that is…

Now… it’s time for part three of my report:

In the end I added some more details 'cause I just couldn’t help myself.

First up, I decided that I wanted the chimney to look more like a blunderbuss so I added a bit of a funnel shape to the top of it and an edge around it: 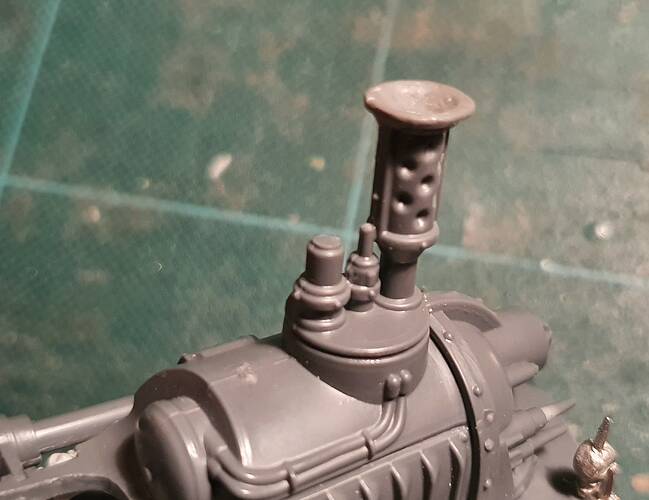 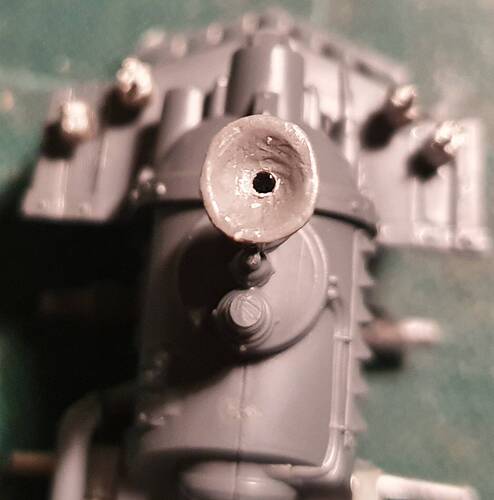 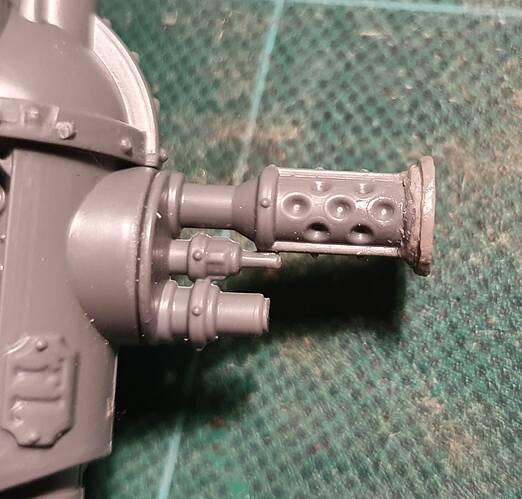 I also decided that the model looked static and wanted to add some movement to it. As you might have guessed from the hole in the center of the chimney… I went for smoke.

I started by making a mock up from blue (white) tac and made an armature to generally fit its shape: 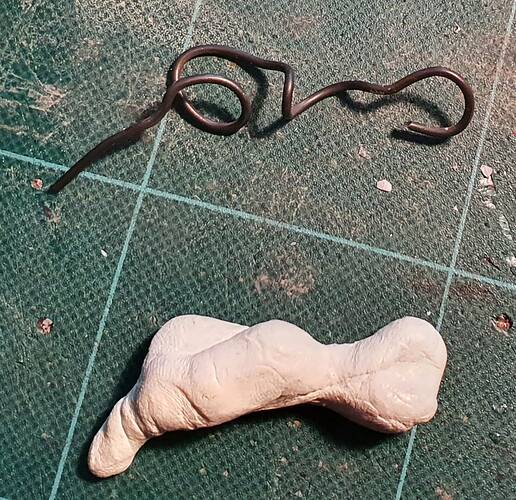 I then filled out the armature with Super Sculpey and baked it for 40 minutes in the oven. Finally I gave it a coat of super glue to give it some extra toughness:

I’ve realized that this will be the model to end all my principles of never painting unassembled/off base miniatures… and in the end I decided to magnetise the driver. What better to use as a platform than an old monopose warriors discarded hat 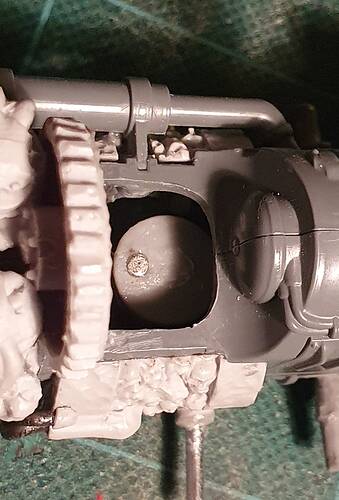 I also made the decision to rotate the end of the exhaust pipe so it wouldn’t spew too much smoke directly in the face of the coaler: 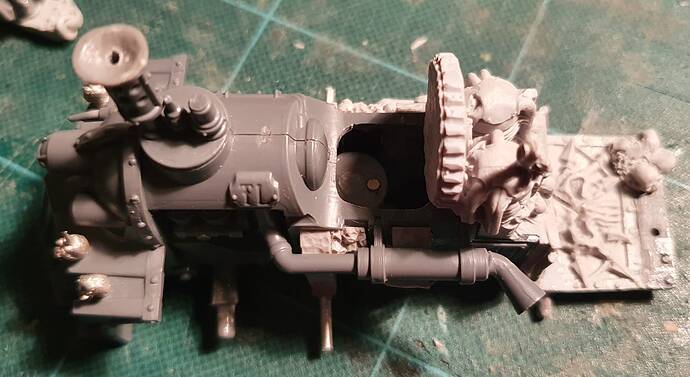 I built up the axels/distances for the sides some more; they might be the most bent axels in the history of man… but at least the side are now snap fit ^^: 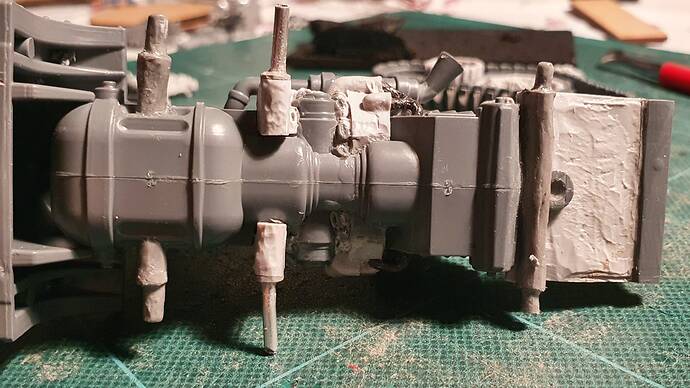 Again, the base is built up to create the illusion of movement, the Engine will be crossing rocks with one track leaving the other suspended in air: 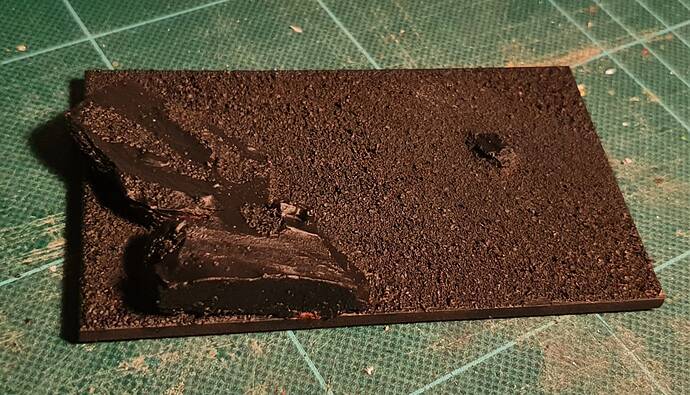 Because of this I also decided that the spikes on the tracks needed to be visible even from the underside. On the other hand there was no need for spikes where the model will be glued to the base so I saved myself some work.

Since I was out of bits from the Hellcannon wheels I had to sculpt them myself: 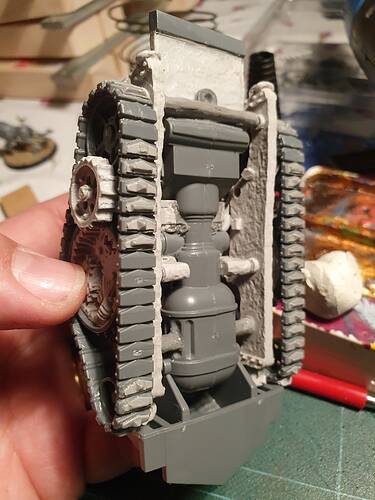 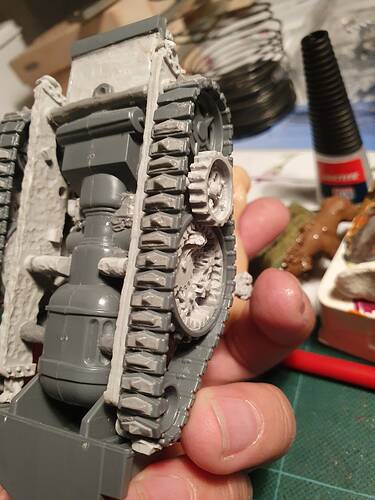 I also added some bolt heads to the coalers platform extension: 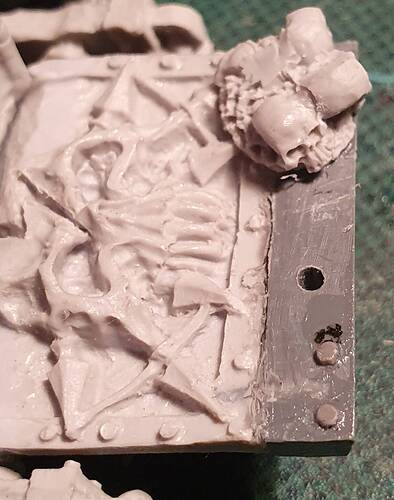 And here is the Engine in all its glory (yes I’m bragging… but I think I’m entitled to because I’m happy with it and I made the furnace fit so well I didn’t even have to use GS to fix the attachment point): 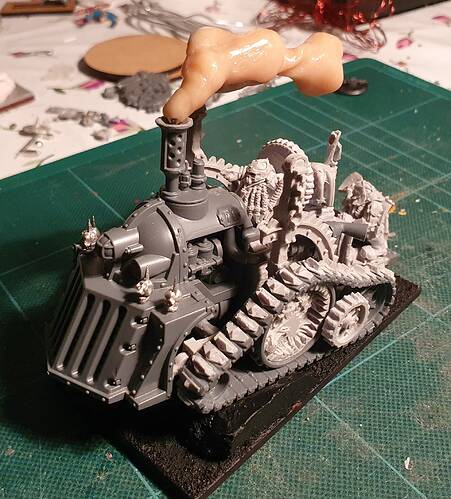 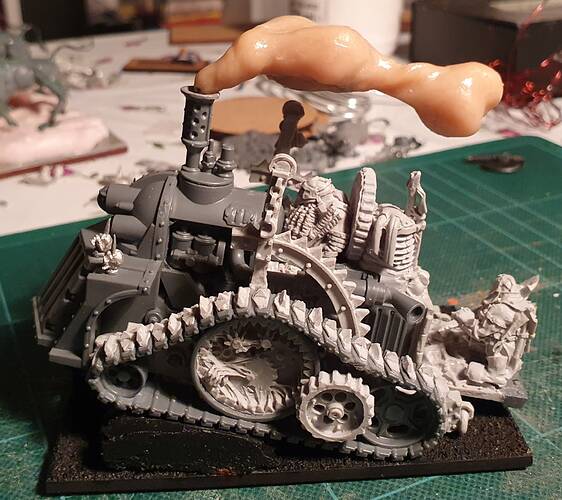 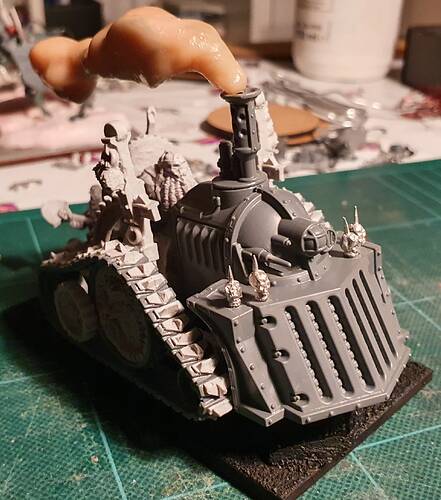 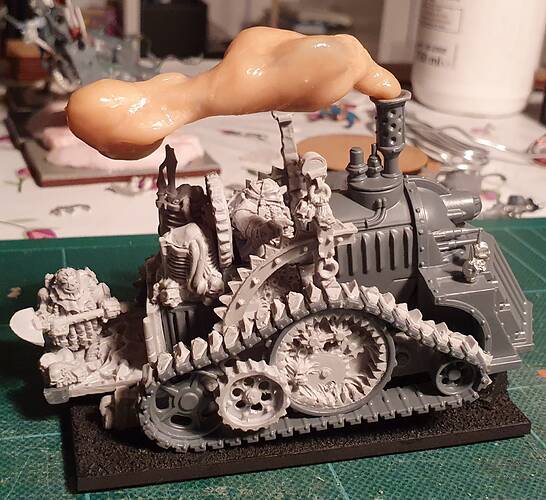 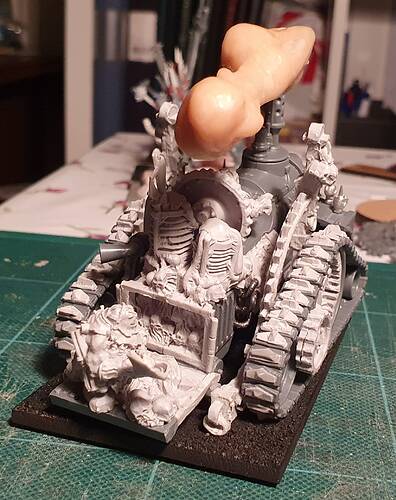 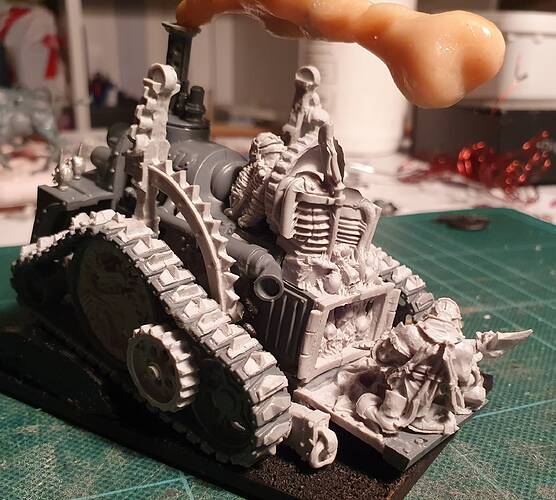 As seen here on these pictures I also added some old metal skulls-on-spikes to make the front end a bit more scaaary/chaosy.

There’s only two (or three) tiny details to fix: 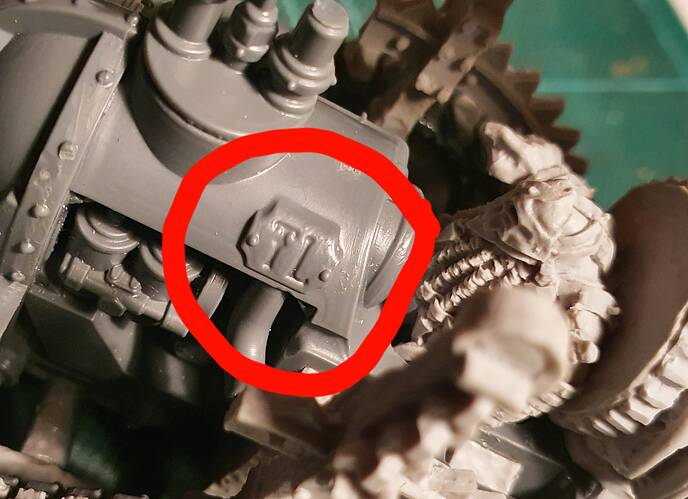 Finally I leave you with a picture of what the kit would look like in an Ebay sales post (more correctly: the pieces I will paint it in): 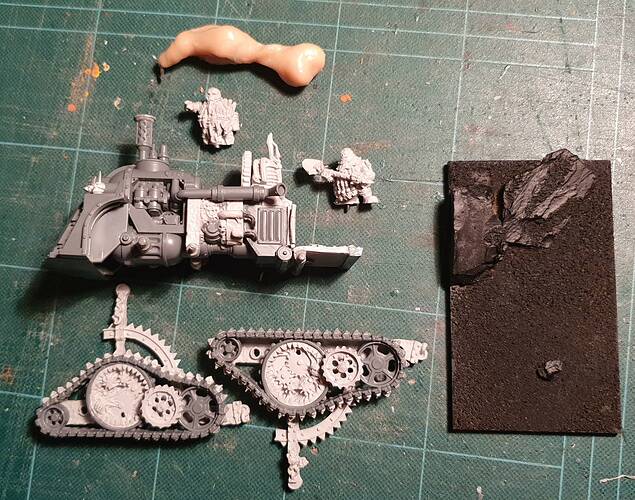 This thing is so cool.

When I read eBay in the last sentence, I was already hoping to scam a piece of art like that…

Great conversion, great inspiration for me to attempt a (much simpler) conversion using this tank kit. Mine is still on sprue.

You really must paint asap though!

Wonderful K’daii conversions! Lovely touch with the flames. Would you pretty please copy over your scalemail tutorial to the Sculpting Tutorial section?

Seeing the servohauler get such a beautiful Hellcannon style conversion somehow brought a tear of joy to my eye. The Hellcannon and its crew are one of my top favourites, and I’ve always wanted to see many more machines in their style (got some WIP details on FW warmachines here, but nothing of this magnitude).

Your conversion is flawless and exquisitely crafted. I particularly like the spiked tracks. Usually I find that tracked tractors don’t fit well in fantasy, but yours have such a rugged look to it that it convinced me on first sight.

The beaten metal look and faces of captive souls is wonderfully true to the Hellcannon design.

Hat off to you, sir. Toppenbygge!

So awesome…the creativity and thought process put into this is further proof that kitbashed conversions are always better than the run of the mill kit off a shelf.
Cheers to you, well done!

The tracks really needed spikes though… that’s such a big part of the grim Hellcannon look I think.

Is this ok for the tutorial section:

Thanks mate!
It’s good to see the thought process come to life and that the real version matches the idea pretty closely. ^^

Holy fuckery fuck!
This will go straight published in our IG profile!!! Man you are on a roll!!

I’d presumed that I had clicked onto the Artisans thread and thought WTF. Why is he showing WiP pics, the contest isn’t finished yet.

Once I realized and I was over my distress, I enjoyed your build.

Infernal Engine is so amazing as well as the scale armor tutorial. Very similar to my technique. Love it!

Thanks man! I really like how it came together in the end.

I think you have more patience than me though… your armour always look cleaner. ^^

I think the big difference is that I never started mass production. I had enough classic minis for an army I had to sculpt only the characters. Hence more time to work on tiny details. Taht’s it. But thanks