In my recent time away from painting supplies had some time to work on a DIY paint handle. It’s something I’ve needed for a while but could never seem to pull the trigger on the purchase, having moseyed along just fine with amalgamations of cork, sprue, wire, putty, old paint pots, old pill bottles, etc.

At the bottom I will link to some of the currently available products that I used as inspiration while looting my basement for parts and pieces. As a fair warning this project was really mostly about salvaging something without spending any money and was largely based around what I had on hand. Hopefully there are some ideas to take away for those interested.

Features I was looking for:

Here is a general layout of the parts used. Plenty of potential substitutes could be made but I had rusty old longboard bearings (perfect since they already have some resistance) and 3/4" PVC at the ready. 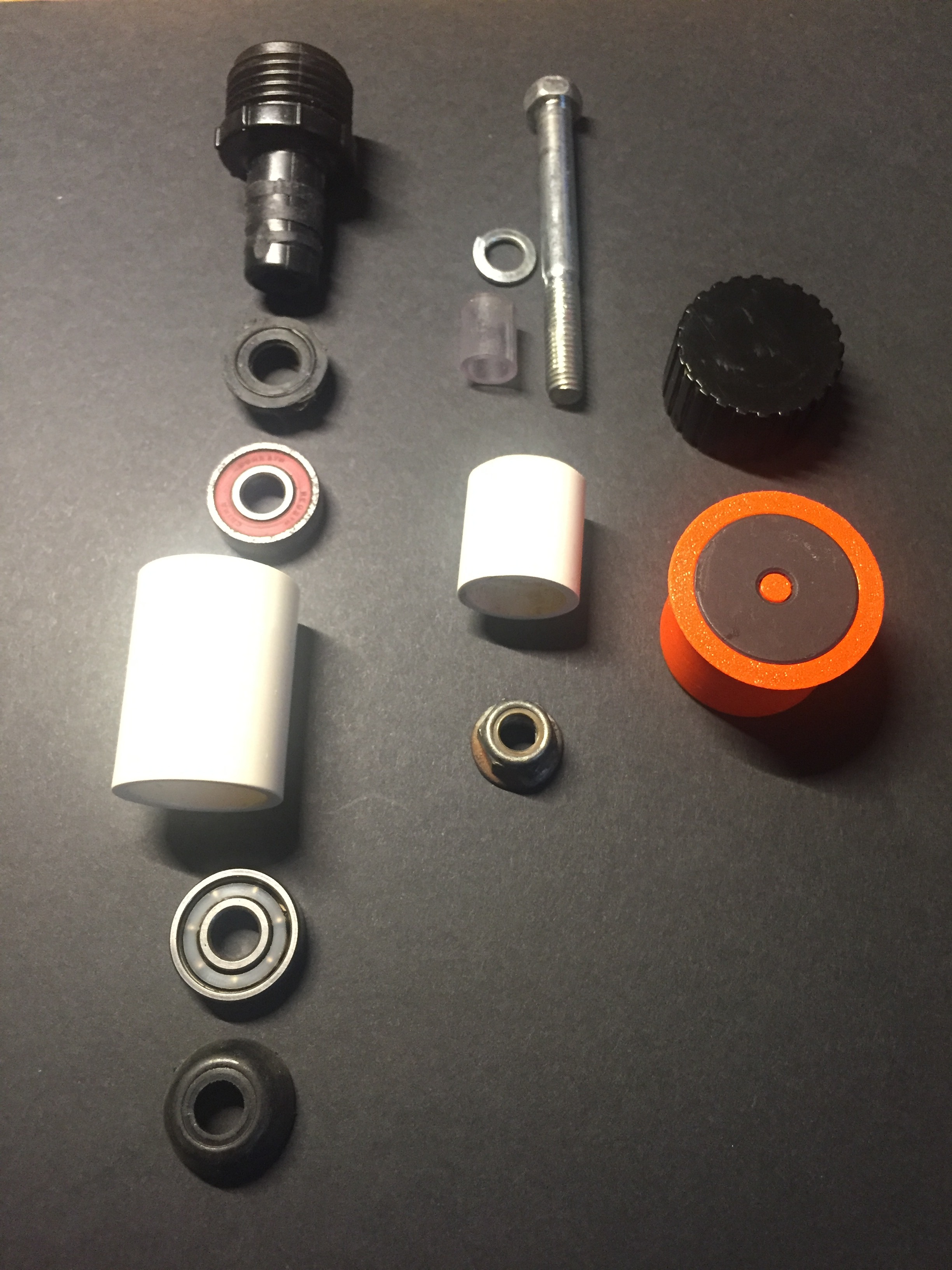 3/4" PVC couplings have a center ridge that provides a perfect shelf for the bearing. One bearing is on each side creating a sandwich. 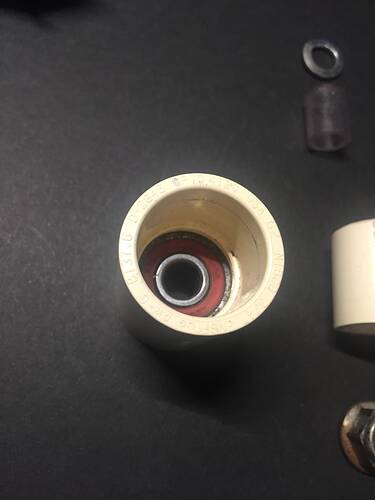 To create more resistance these conical rubber bushings were placed outside of each bearing. That way when tightened the bushing is only contacting part of the bearing. This seems to have given more flexibility with tuning the resistance as opposed to the flat face of the bushing which resulted in either a too tight or too loose scenario. 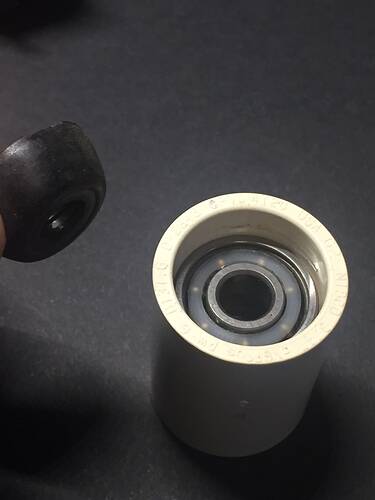 A bolt was thrown through a garden hose fitting with a locking washer added to help prevent the device from unscrewing when manipulated. 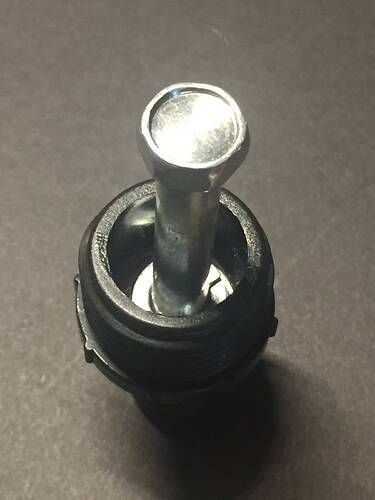 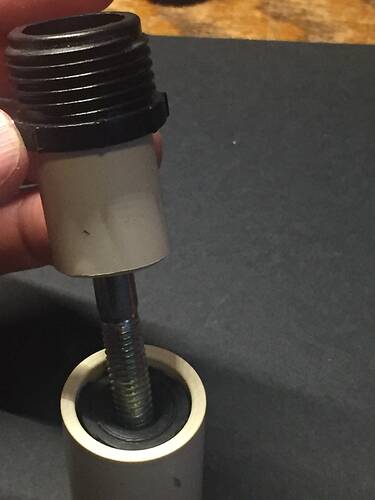 Nyloc nut added on the bottom of the assembly (added assurance against loosening). Other spacers were thrown in the stack to tune tightness and position of the nut relative to the bolt. 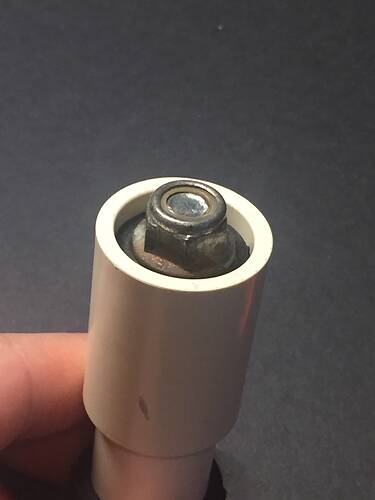 Whipped up the orange part on the 3D printer just to make it stand up and to add a magnet to the bottom so it can be stuck to some metal mid-project with less fear of falling over. 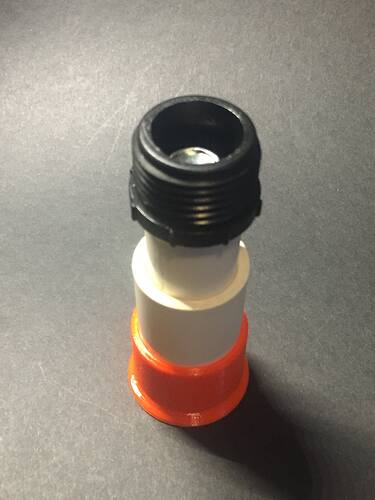 Regular garden hose caps are dirt cheap and can be screwed on and off to batch paint infantry. The gaskets in the caps keep them nice and tight during spinning of the mini. Minis attached with reusable adhesives. 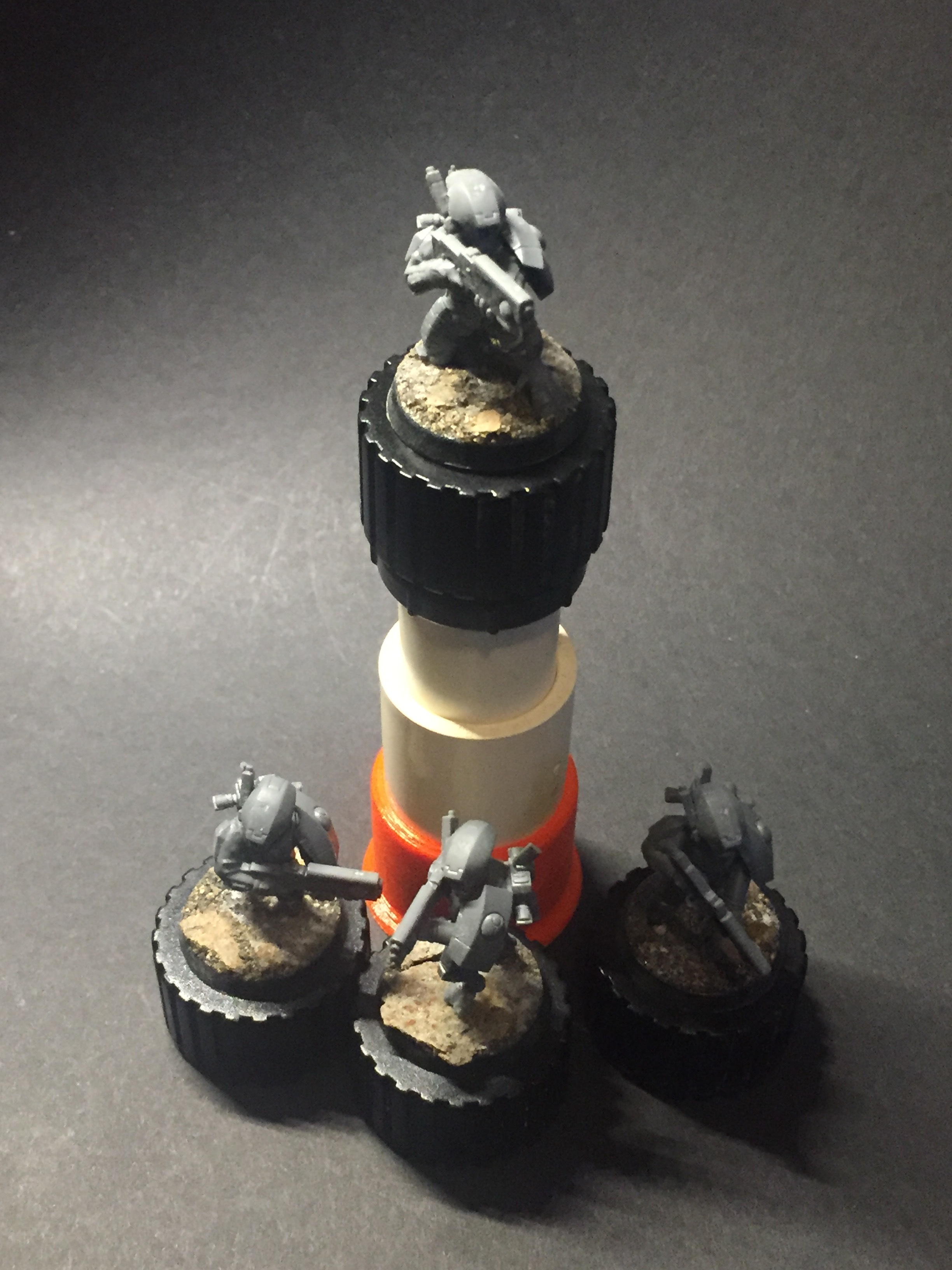 … that stated, I have 90% of the referenced parts lying around. I may have to build myself something similar.

Completely fair assessment. I tend to operate on the cusp of “slightly ridiculous” often so no surprise here. All said and done I think it cost me 24cents total (just the filament for the relatively unnecessary printed foot). Although that’s from a filament spool I got for free and don’t have too many uses for soo… basically cheap as free.

Would be happy to see if you throw something together!

I tried the first handle by GW, but found this basic ”handle” to be my favourite. Cork and some bluetack, For both painting and sculpting/converting. 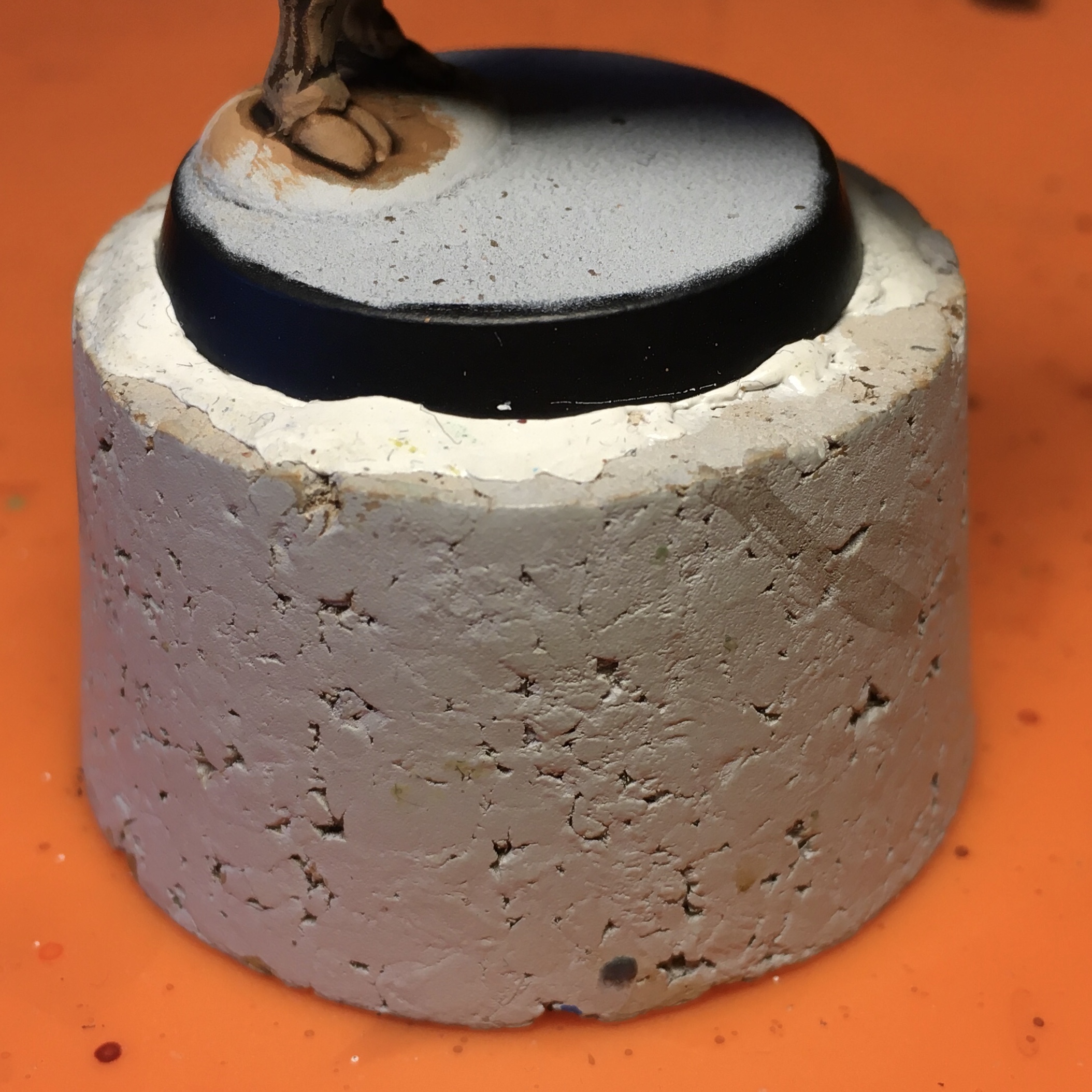 a tried and true classic!

I bought an mdf painting handle on eBay. Had different inserts for different bases etc. They were such a pain to use though. I still use the handle with a fat blob of blue tac on top. Works for every base now haha

hmm… i never understood why people would like a big clunky handle unless they did sub assemblies, and then most handles don’t work very well or centerpiece models.

I recently started gluing models to skewers with hot glue. Initially i dit it just for the zenithal undercoat but now i love it so much i use skewers and a printed tray to hold my models. Well two bases actually, I take a model off tray 1, paint the parts i want and place it in tray 2.

I rarely sub assemble. The zenithal highlight I use to undercoat means it’s dark if it’s hidden - lazy but gets the job done haha.

This is how I do it 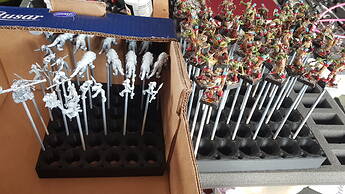 I too never really felt a dire need to buy a handle which is why I put it off until this attempt to mimic what’s out there for free. Previously I would do something similar to your setup, albeit with sprue or whatever around at that time (those trays you have are a really nice addition though). Also collecting old pill bottles is pretty handy. I too rarely sub-assemble anymore but If I am I do something skewer-like or a part pinned with wire stabbed into cork to minimize the contact area, no need for a handle.

The handle isn’t something I’ll use for all cases and I’m still getting familiar with it but I do like having a larger thing to grip, and it keeps me away from the tendency to fiddle with the base or parts of the mini for stability when painting a mini on a stick. It’s probably best for prolonged periods working on the same model although I’m liking it for the current small batches of 4 Tau. Even just the hose caps without the handle are good for quickly picking up to paint.

Granted (as with most things hobby related) my methods and focus are about as fickle as the winds of chaos.

my methods and focus are about as fickle as the winds of chaos.

The skewers on the tray work great for me.

If anyone wants the stl… I can share, it’s my design.

Biggest batch I did in one go. 41 gobbos in about 4 sessions of 4 hours!