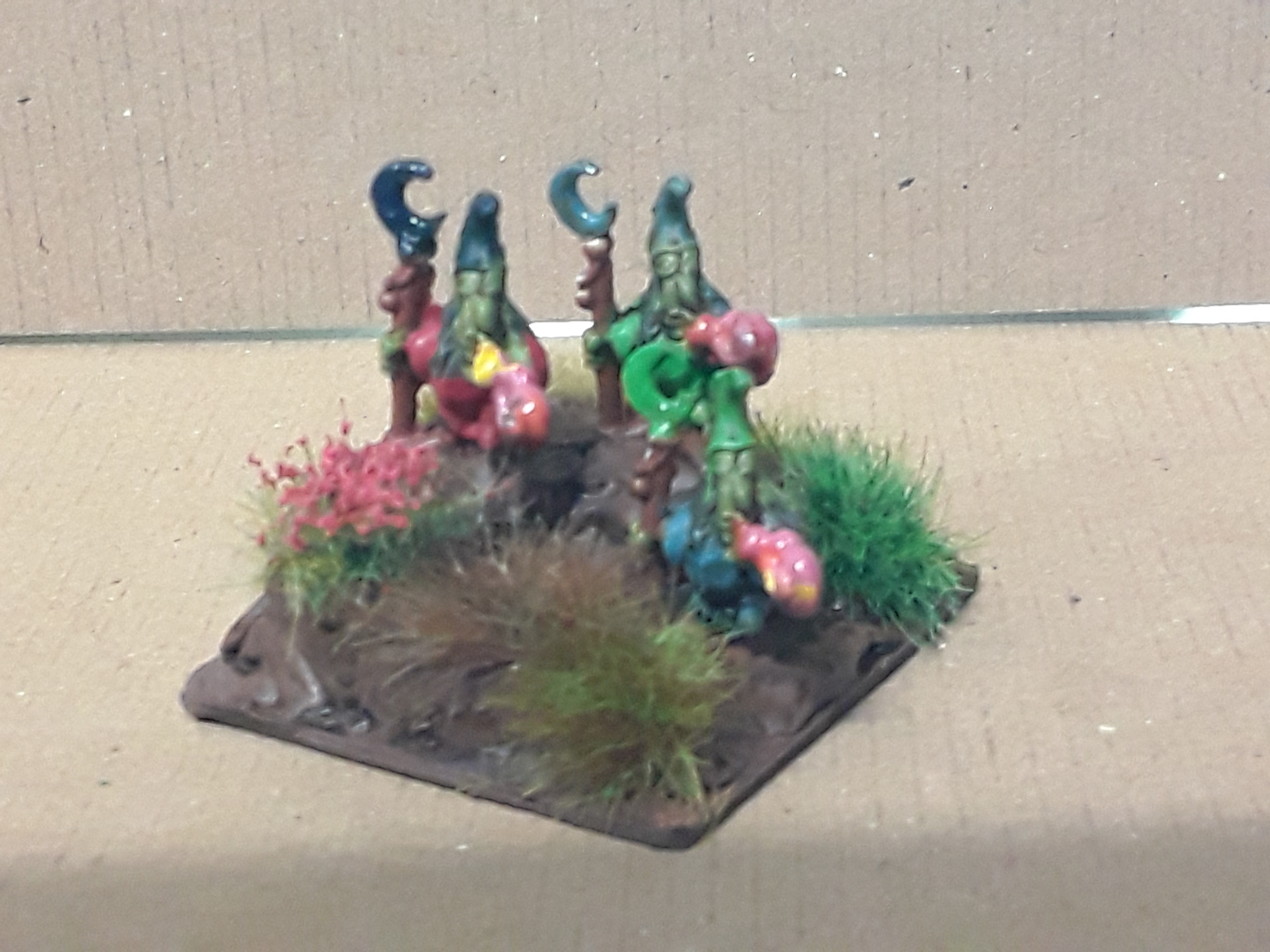 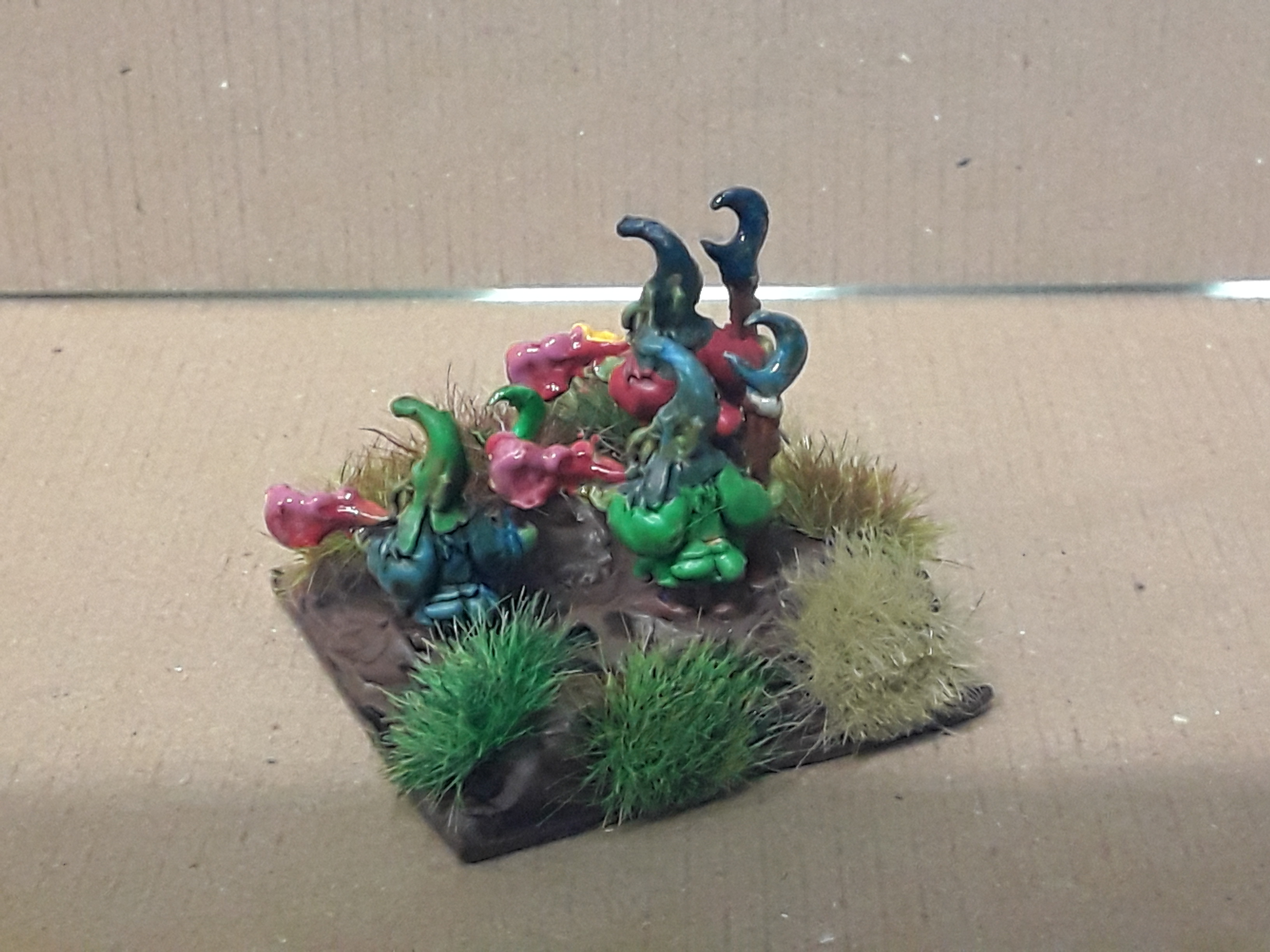 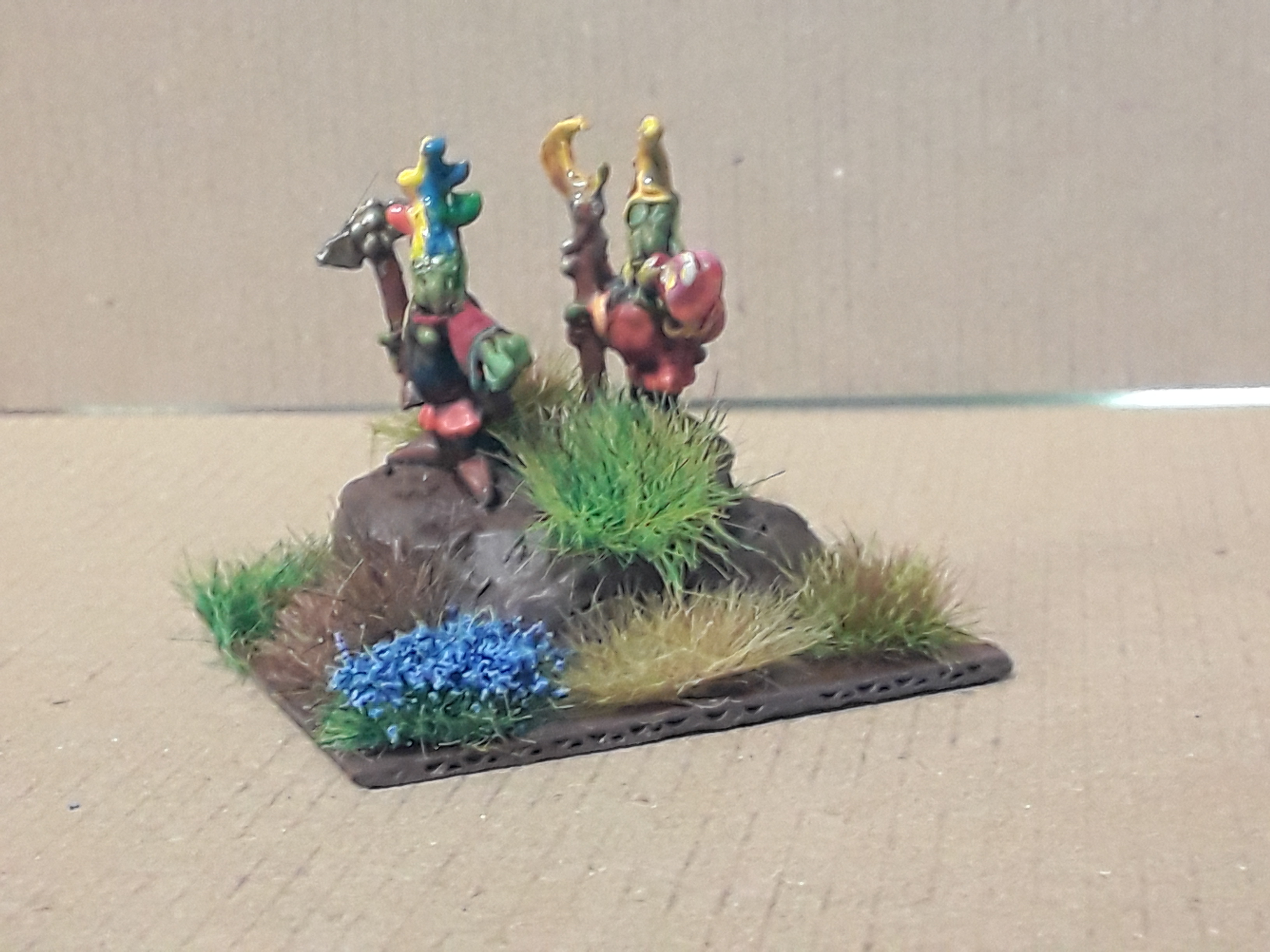 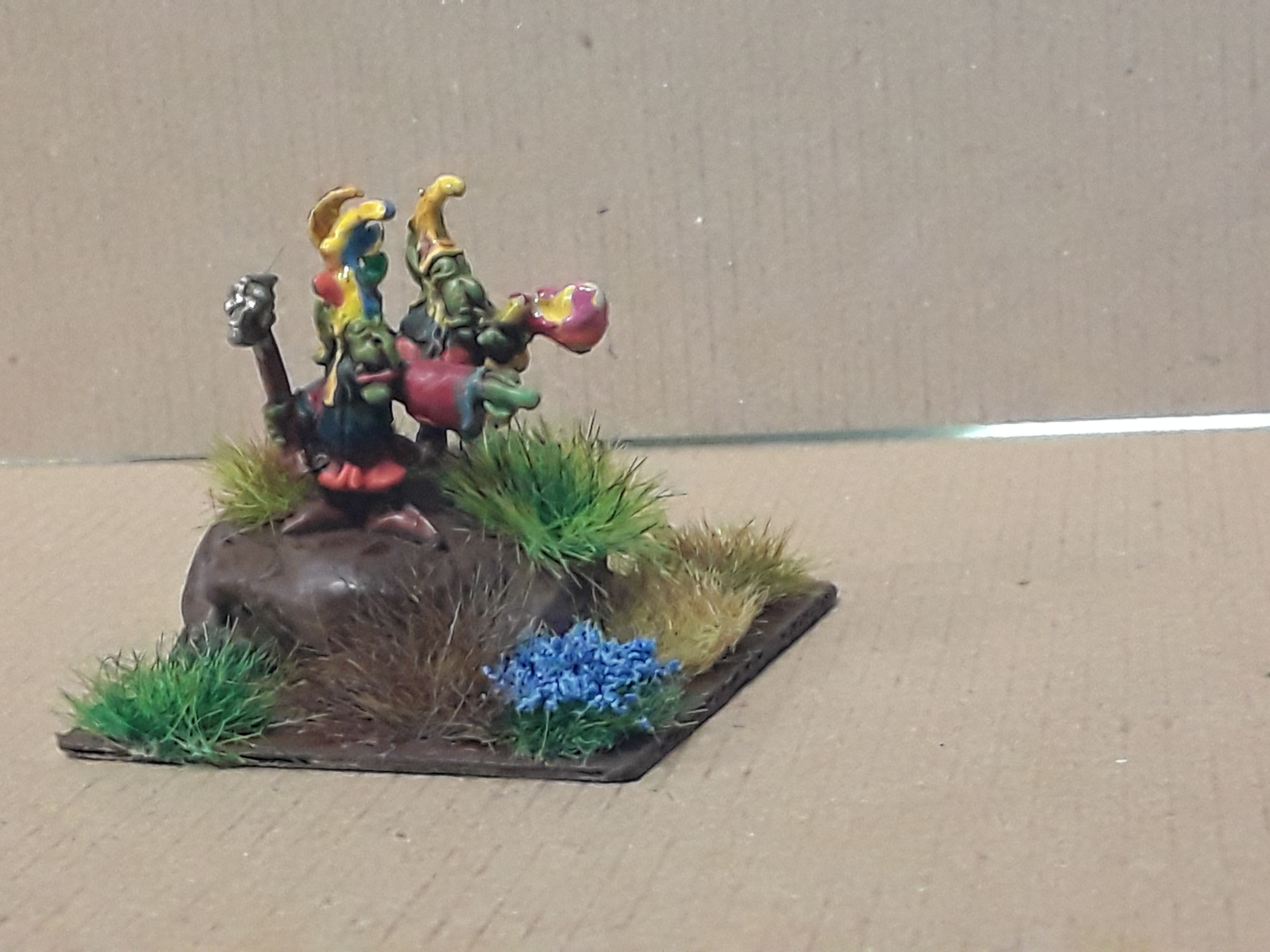 Looking great there Duncan!
The shamans almost come of as some “magical war machine” when based together like that, as in a smoke casting ritual…

Duncan these look great, really nice to see the sculpts finished and based like that

Yes, I imagined the group of Shamans conjuring some offensive cloud of noxious mushroomy vapour to send wafting over the enemy. 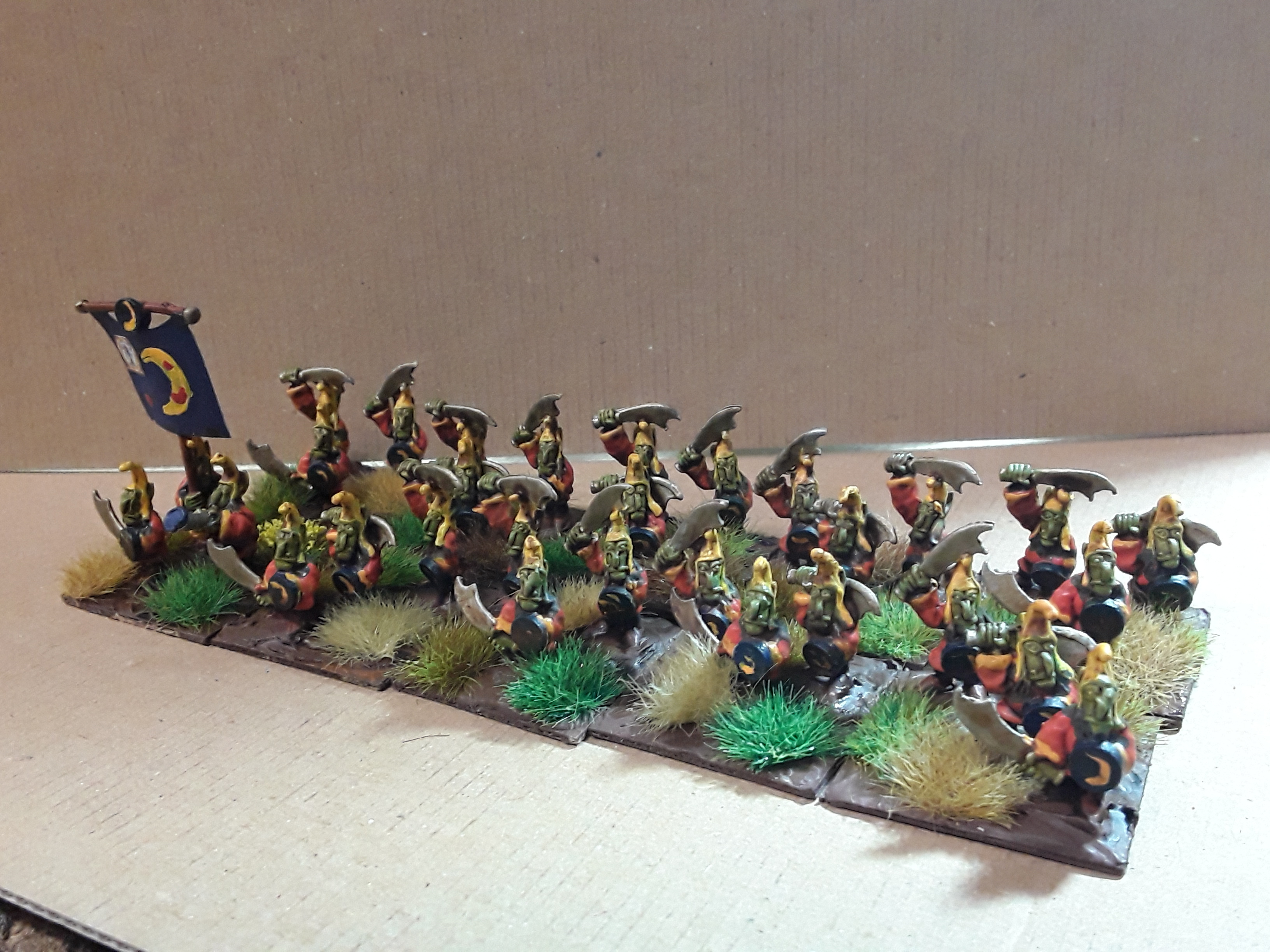 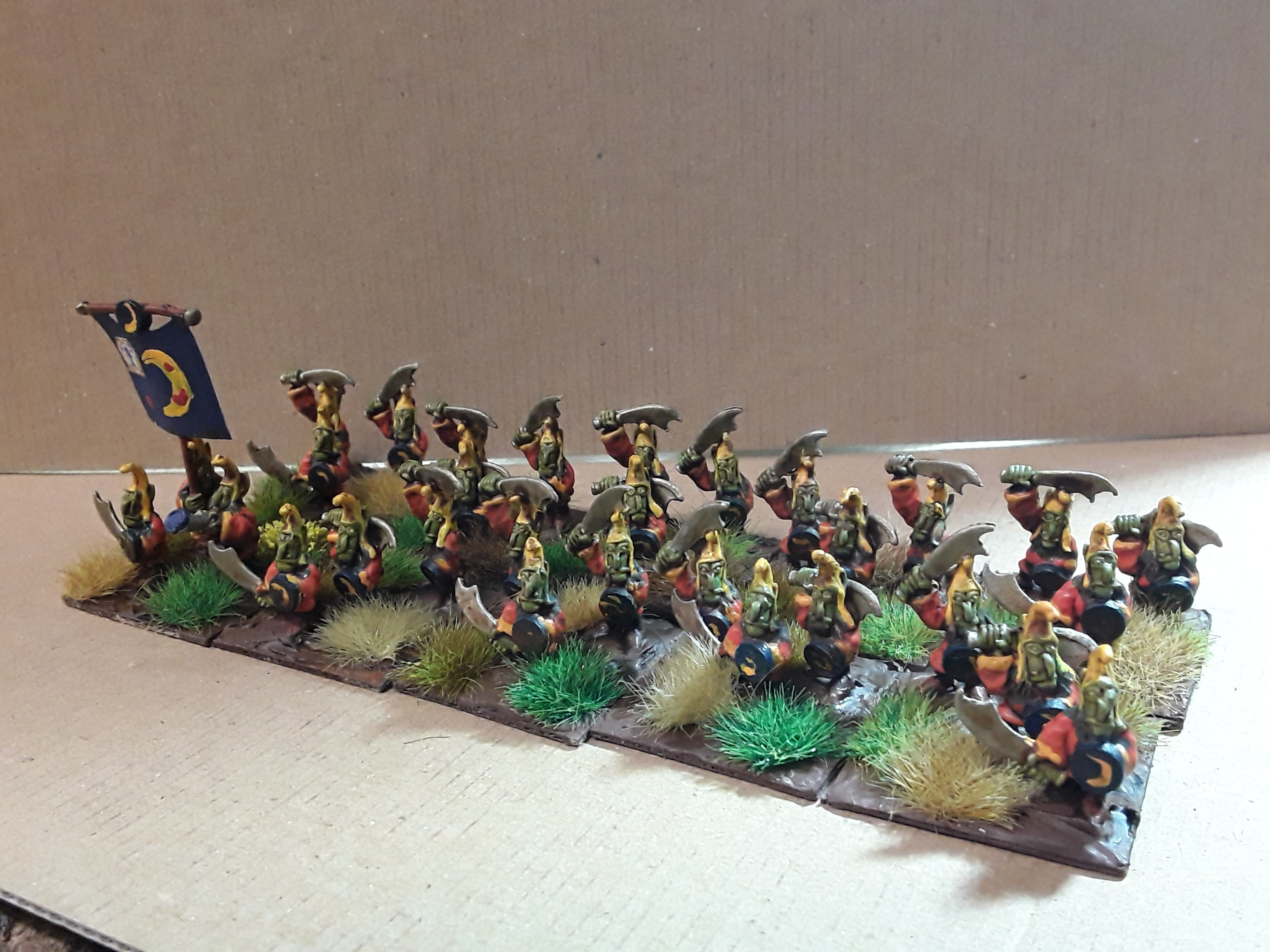 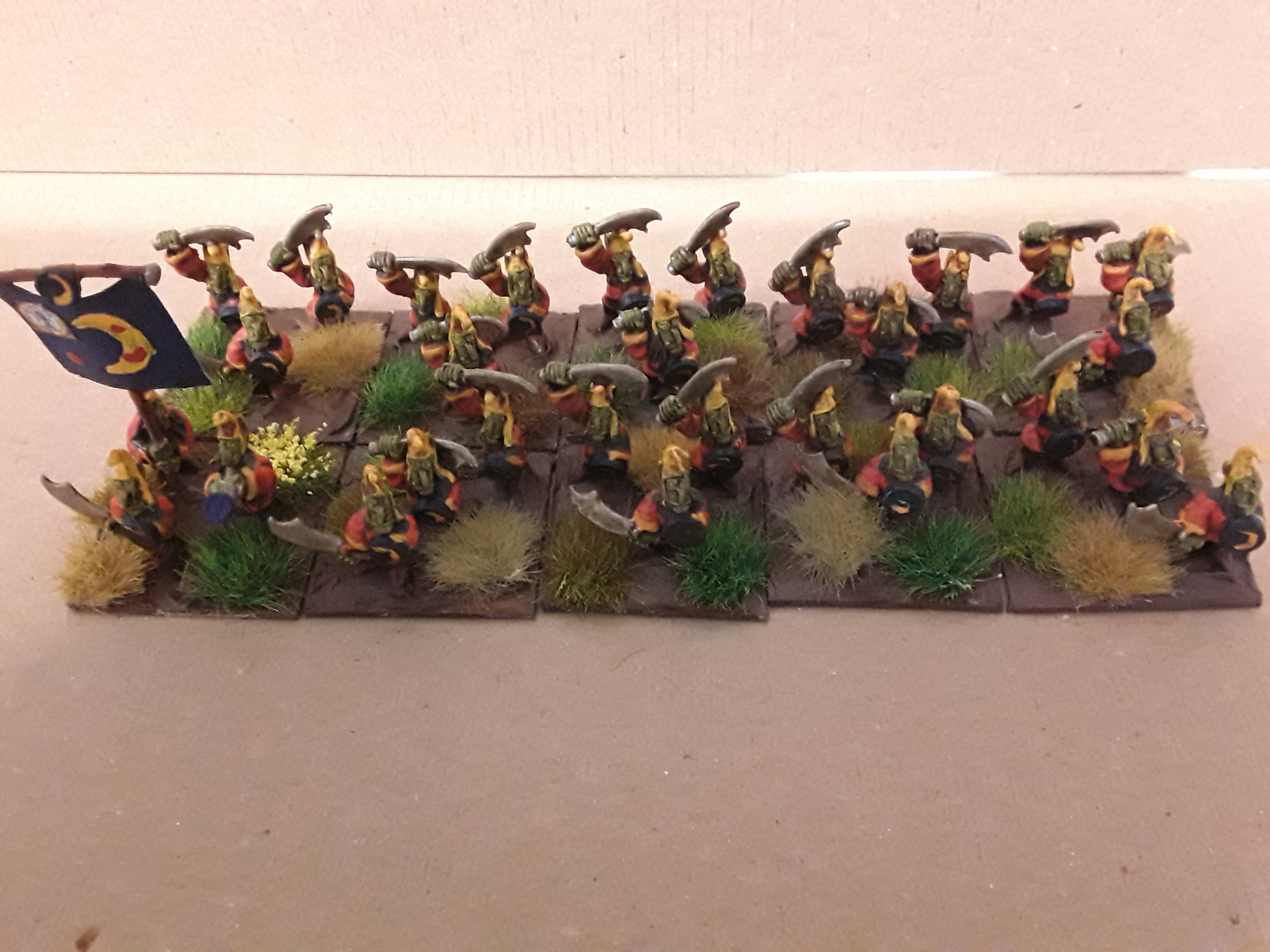 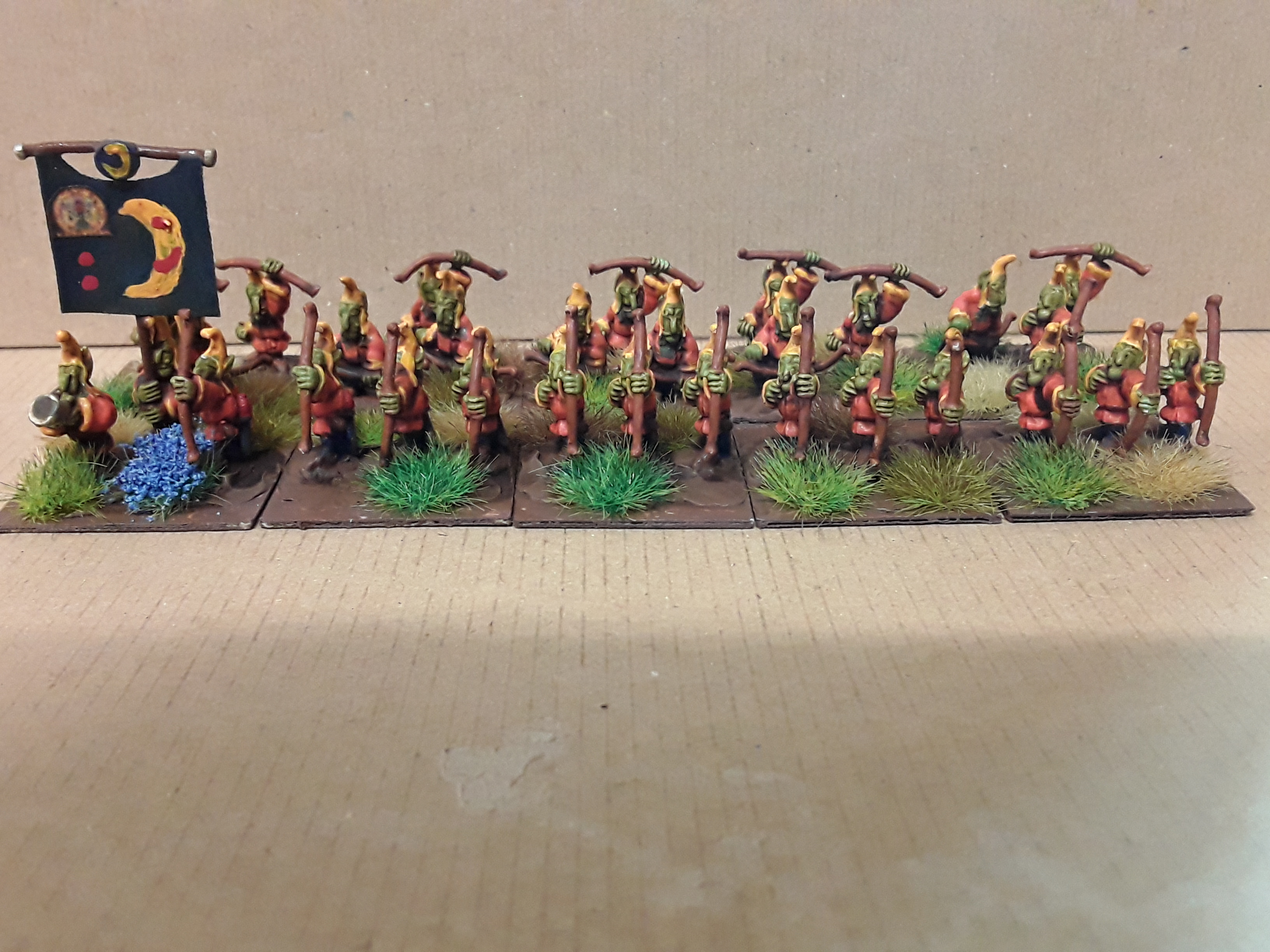 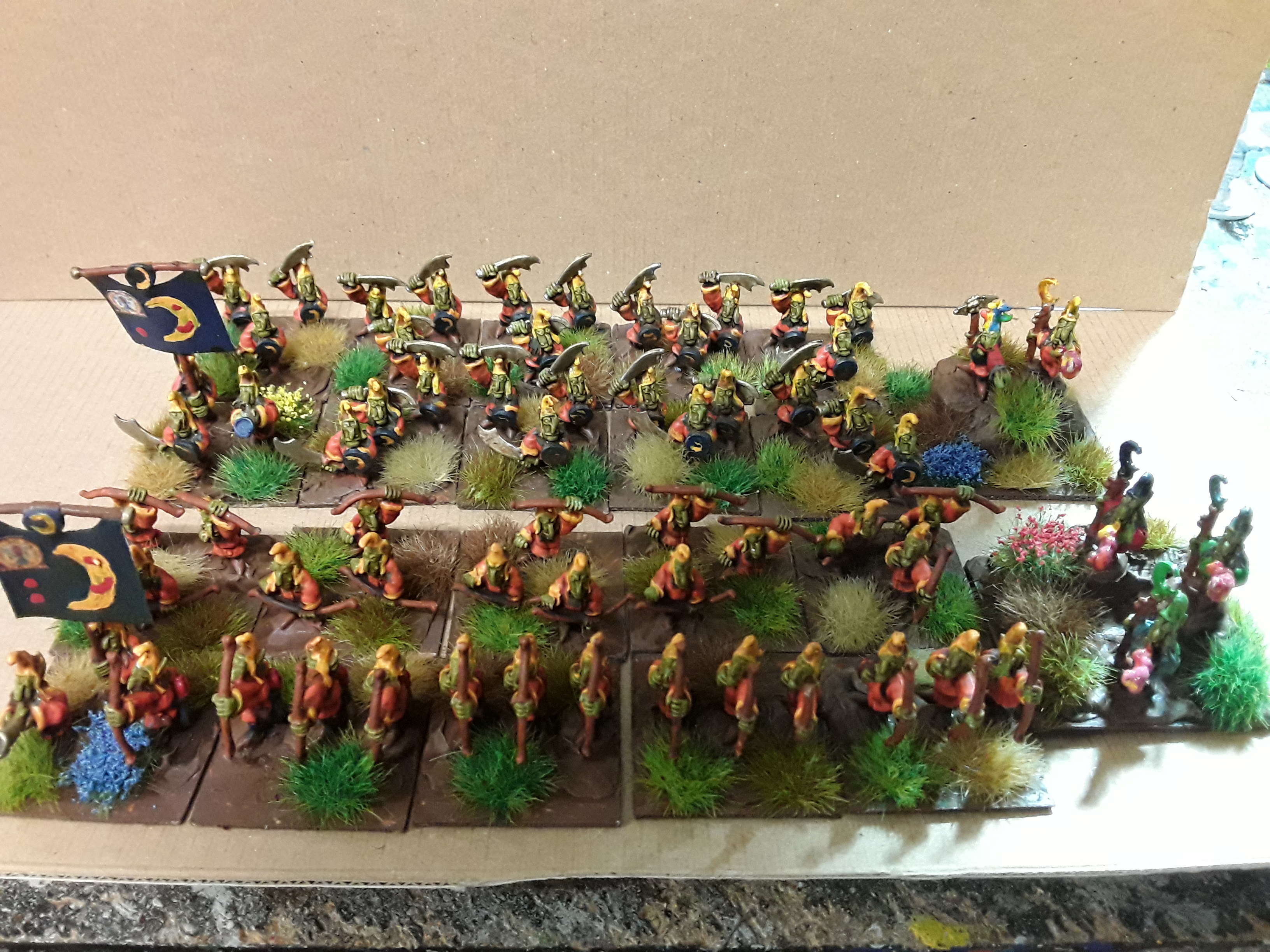 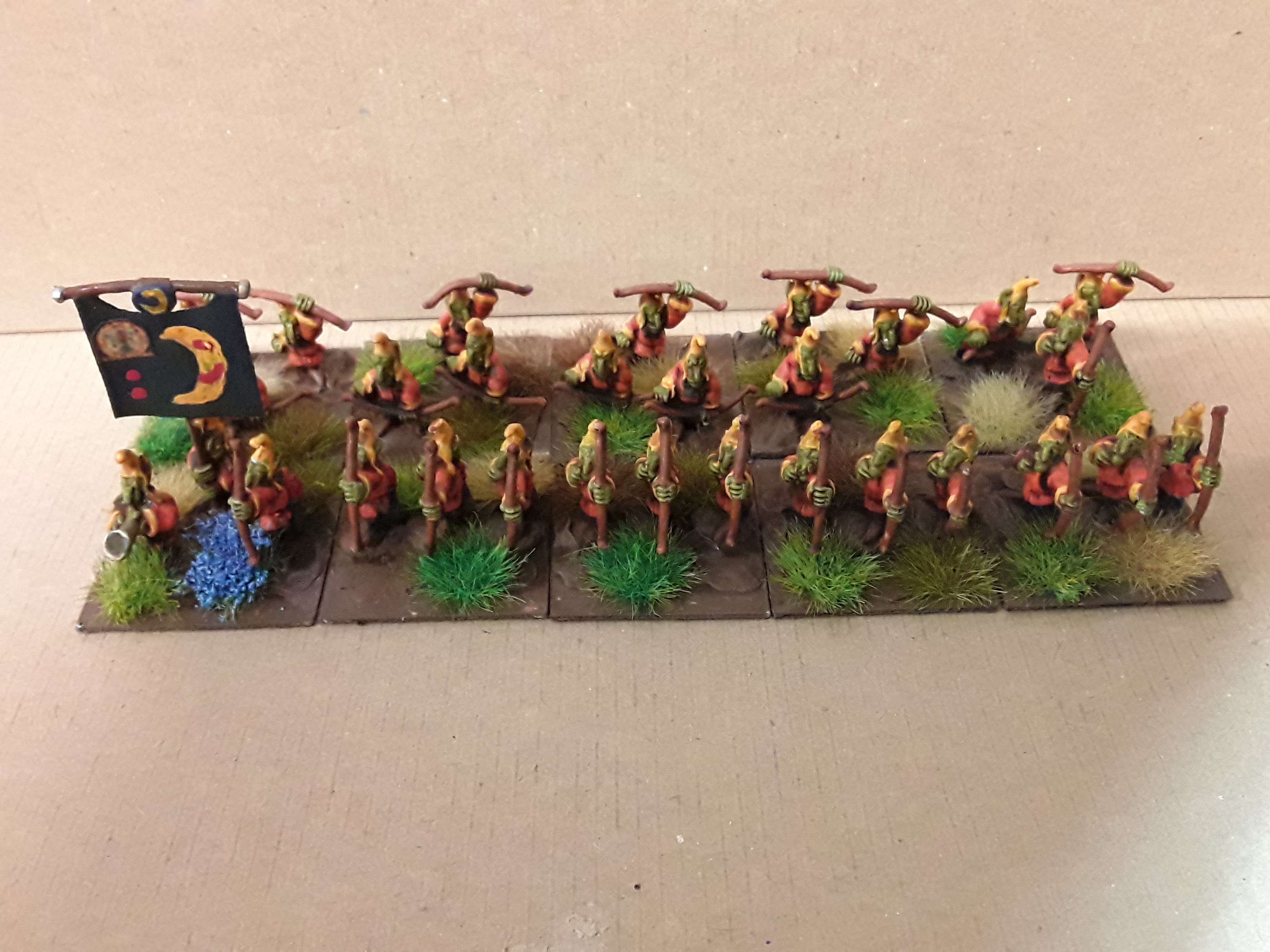 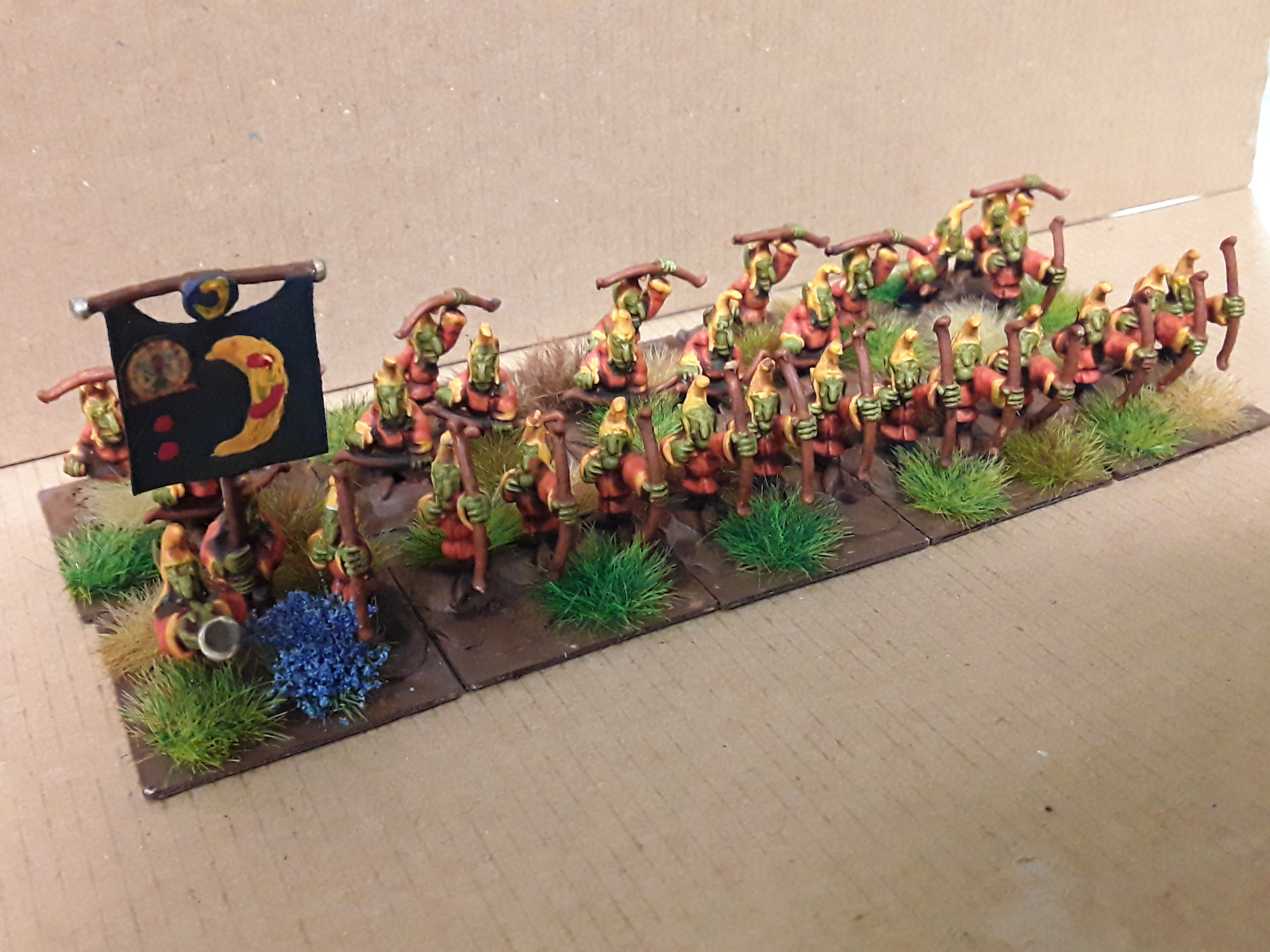 They look great all ranked up like this, congrats @Duncan great job!

Looks great @Duncan!
Do you have a rule set in mind for these? I think you mentioned some generic historical basing for the Tjublings. Are these the same? Is 4x4cm the most common?

No rules in mind.
Most of the rules that the people I normally will game with are from Peterpig and they use a 3cm by 3cm base for normal infantry, 3cm by 4cm for cavalry and skirmishers and 4cm by rcm for generals, heroes, cannon, anything else. So although there are no current rules that people use I have kept the same basing size and everything incase someone comes up with something.
There is a really old Peterpig set of rules for fantasy, but everyone I know only plays historical at 15mm and I have never seen anyone using those rules. I think that they are the oldest ones that Peterpig currently have in issue and I think then only as a pdf, although I would have to check to be sure.
Anyway, you never know, one day someone may be want to play something fantasy based and then I will have the armies ready to go.

Very unique color choice on the shaman (shamans, shamani, shamanisses?..,not sure on the plural there

). It works very well. Your multi-based units came out great as well. Look forward to seeing your whole army for these. 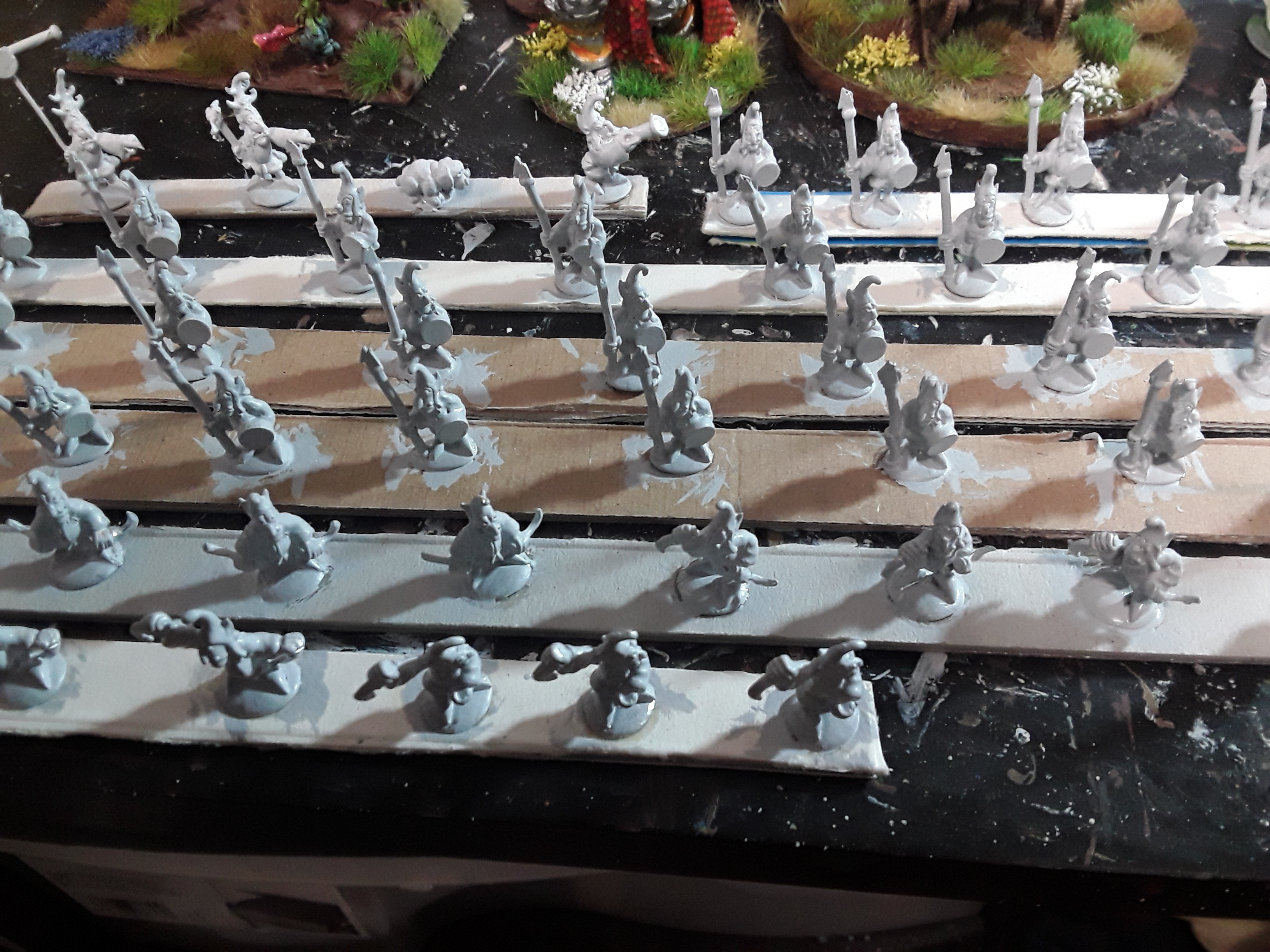 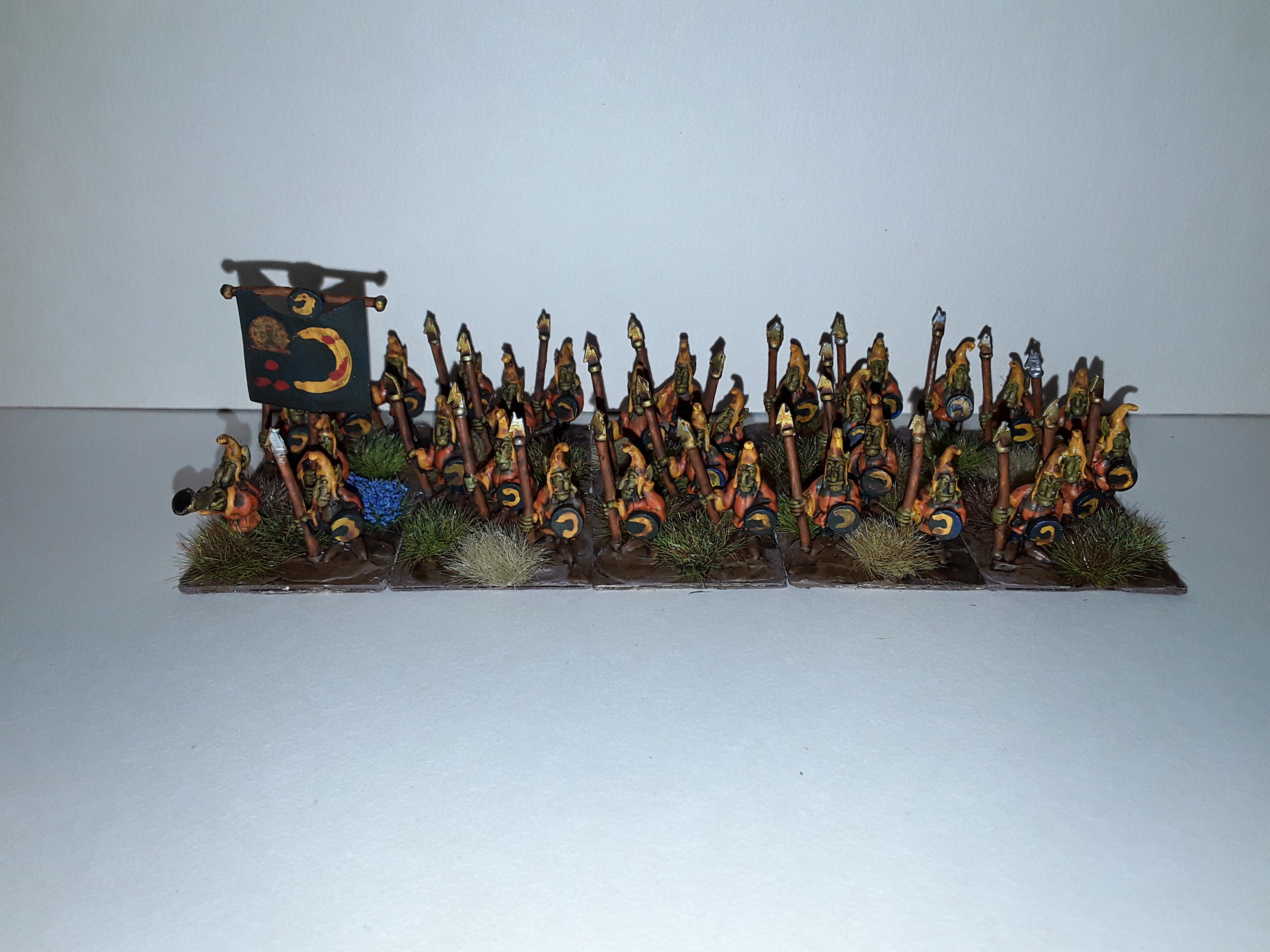 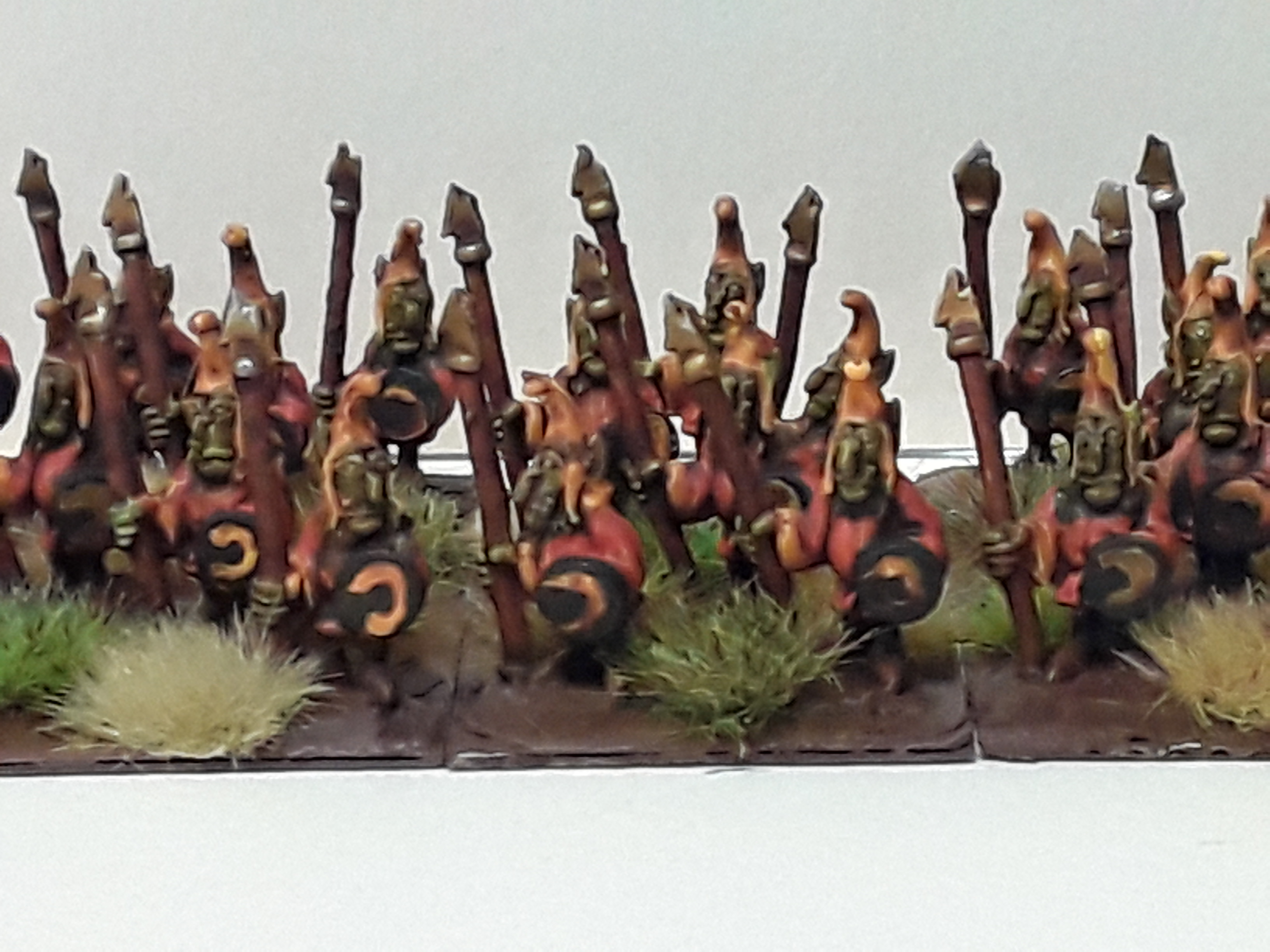 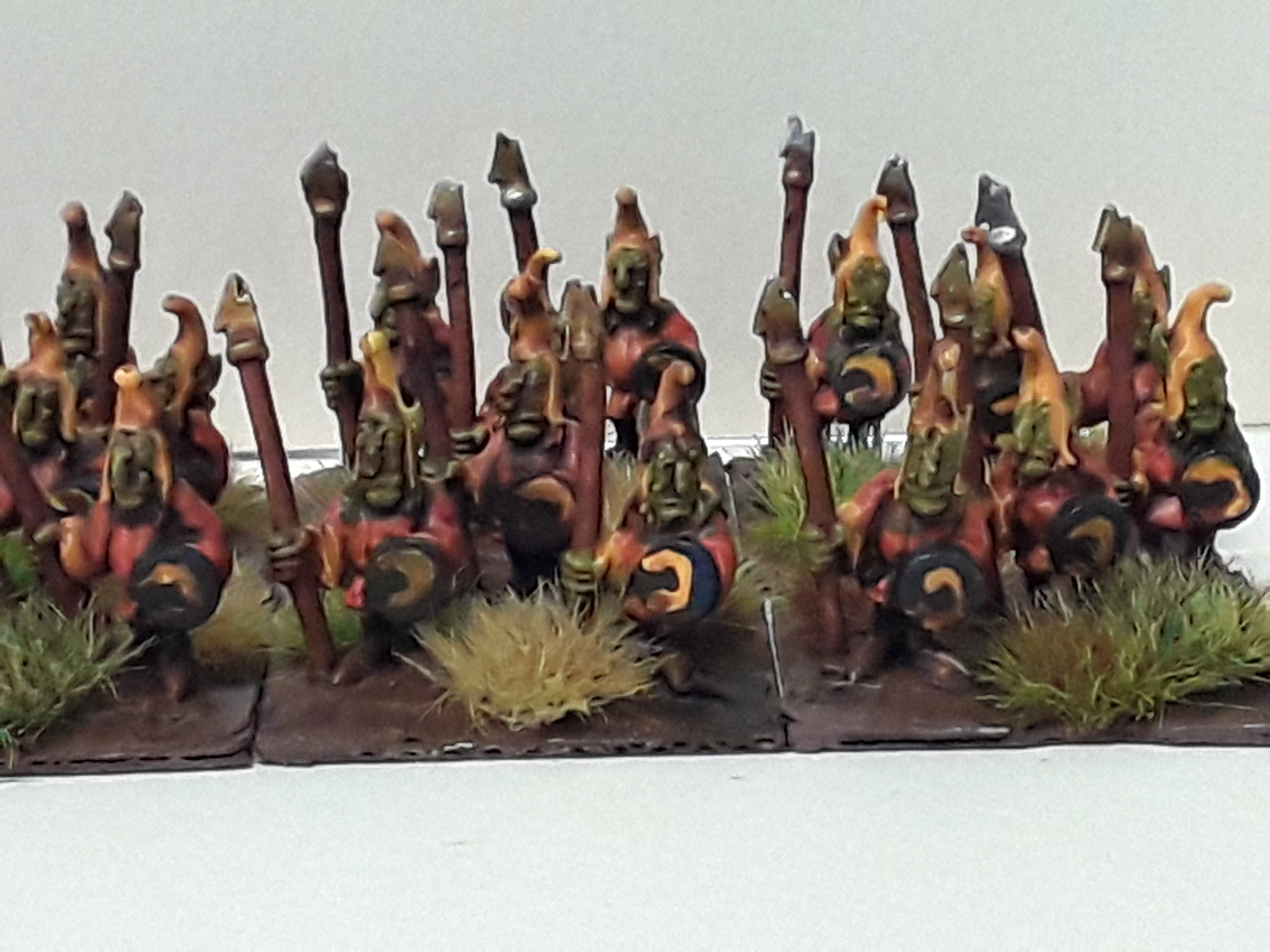 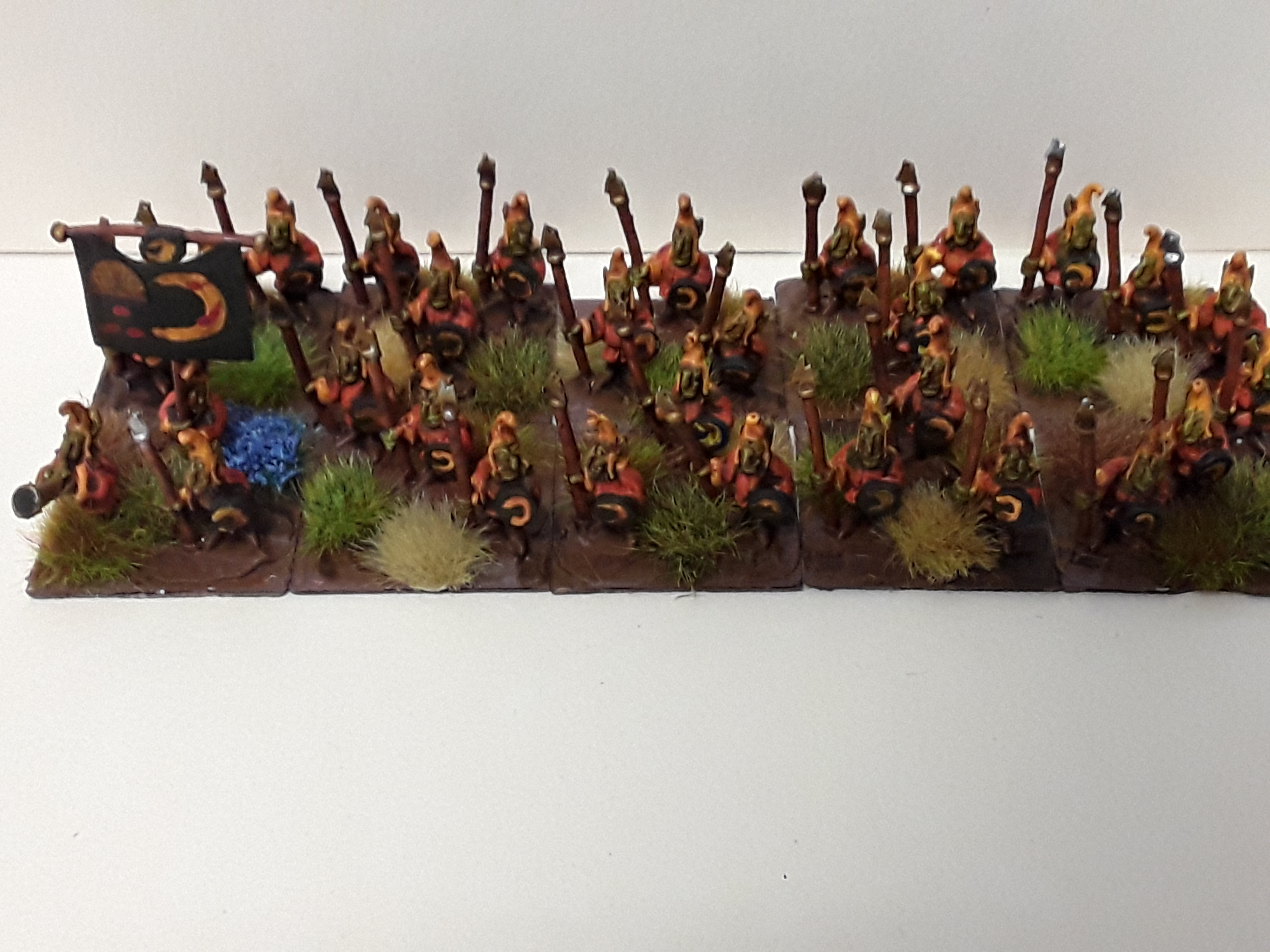 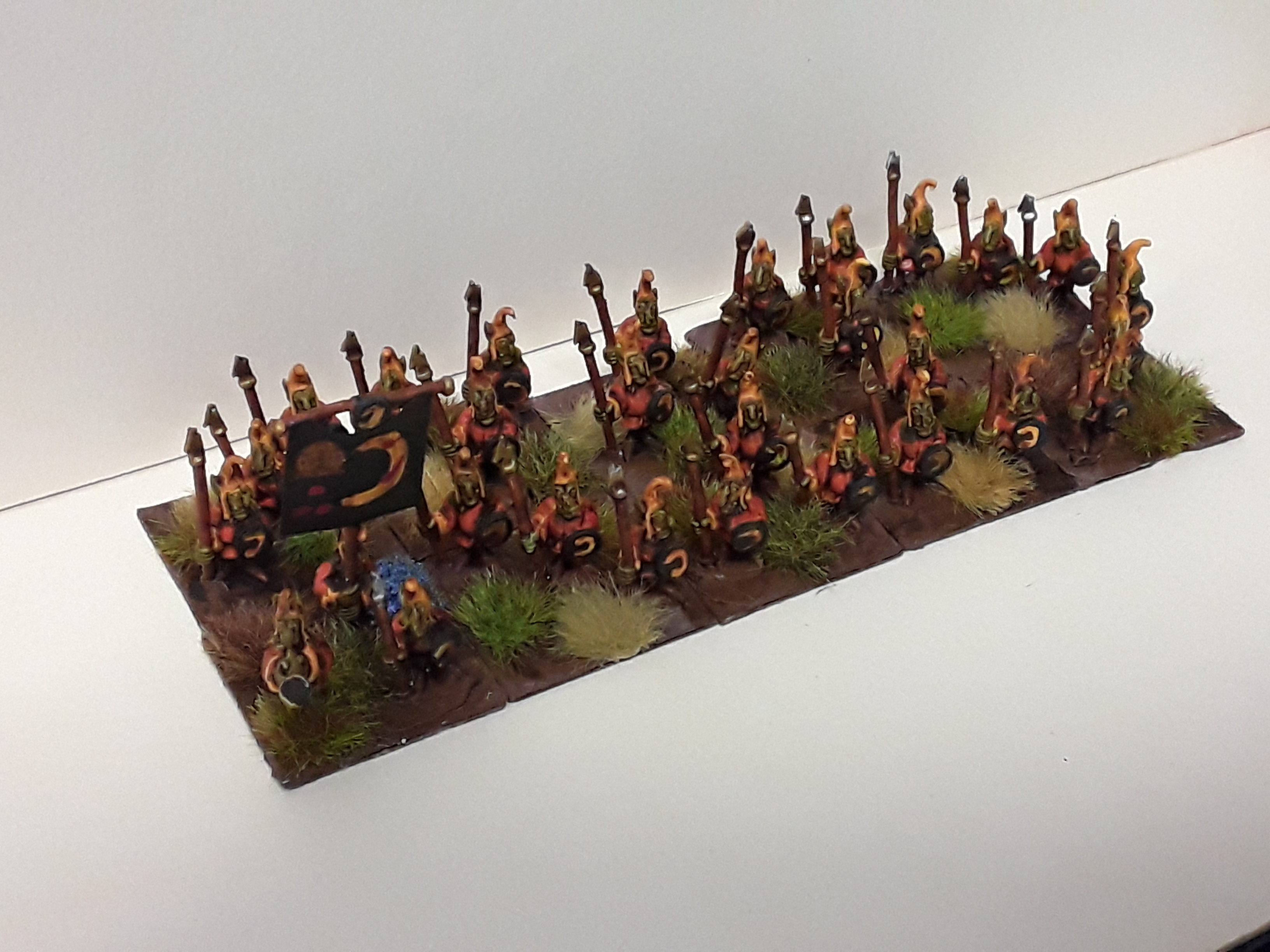 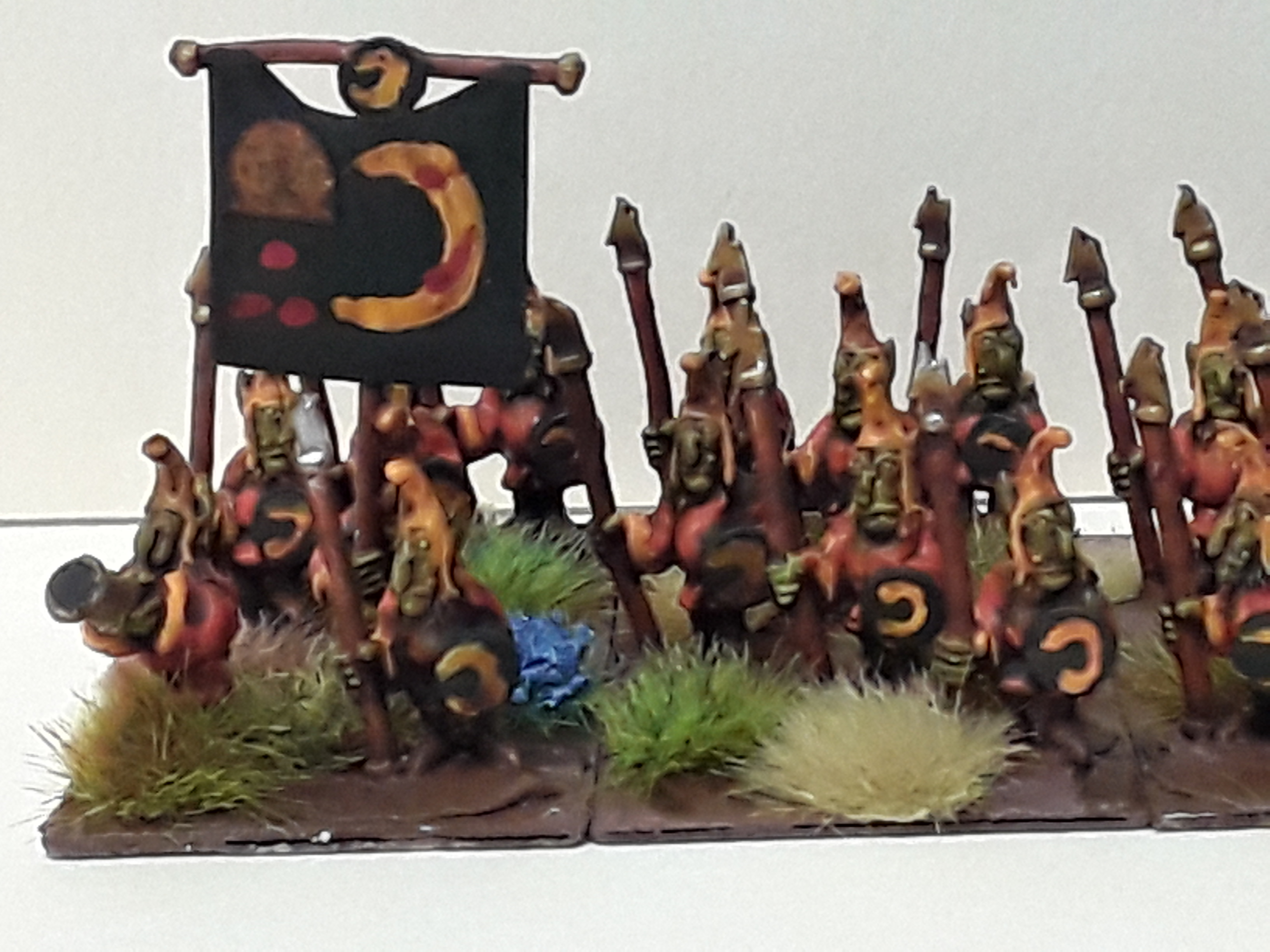 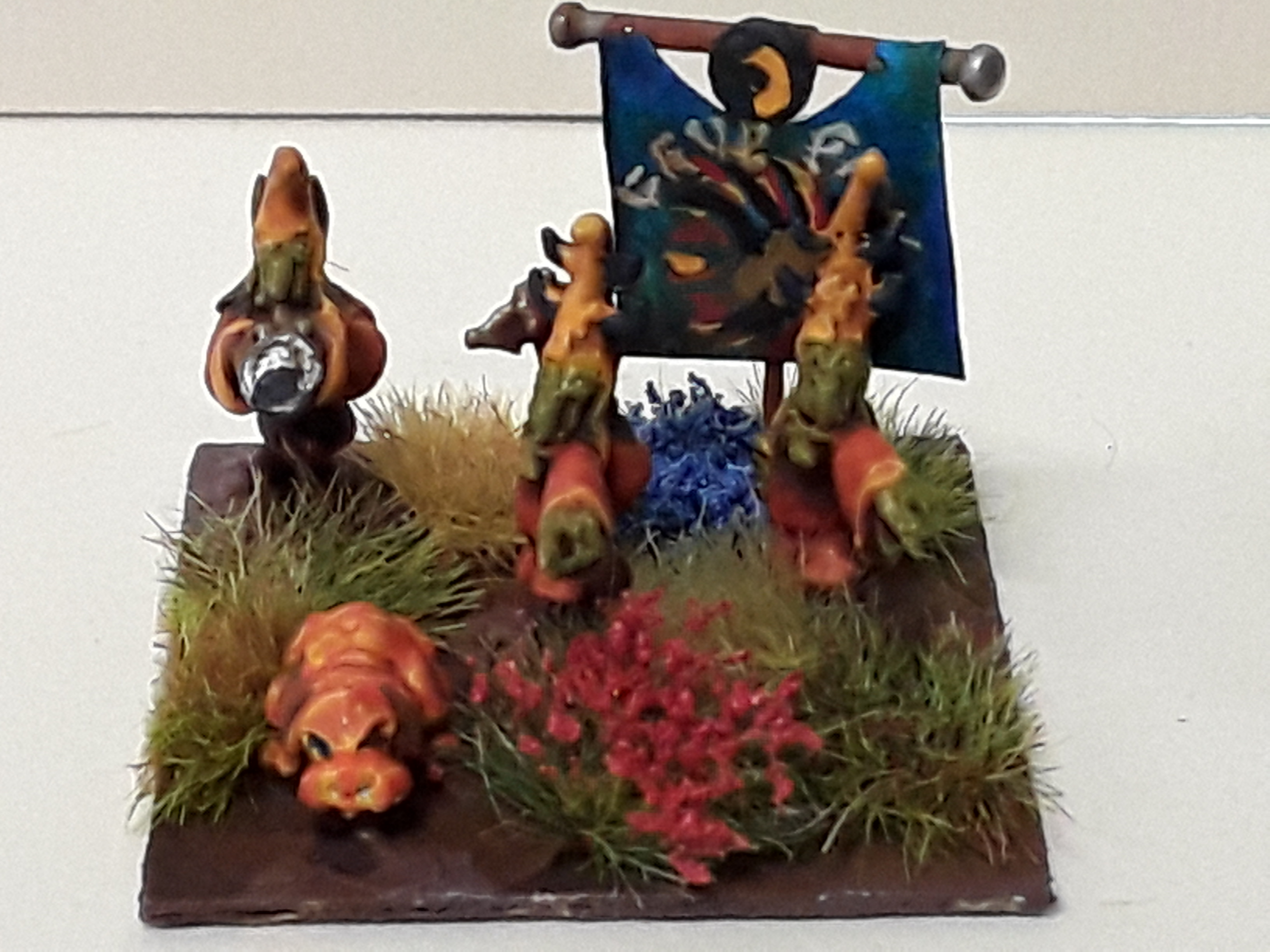 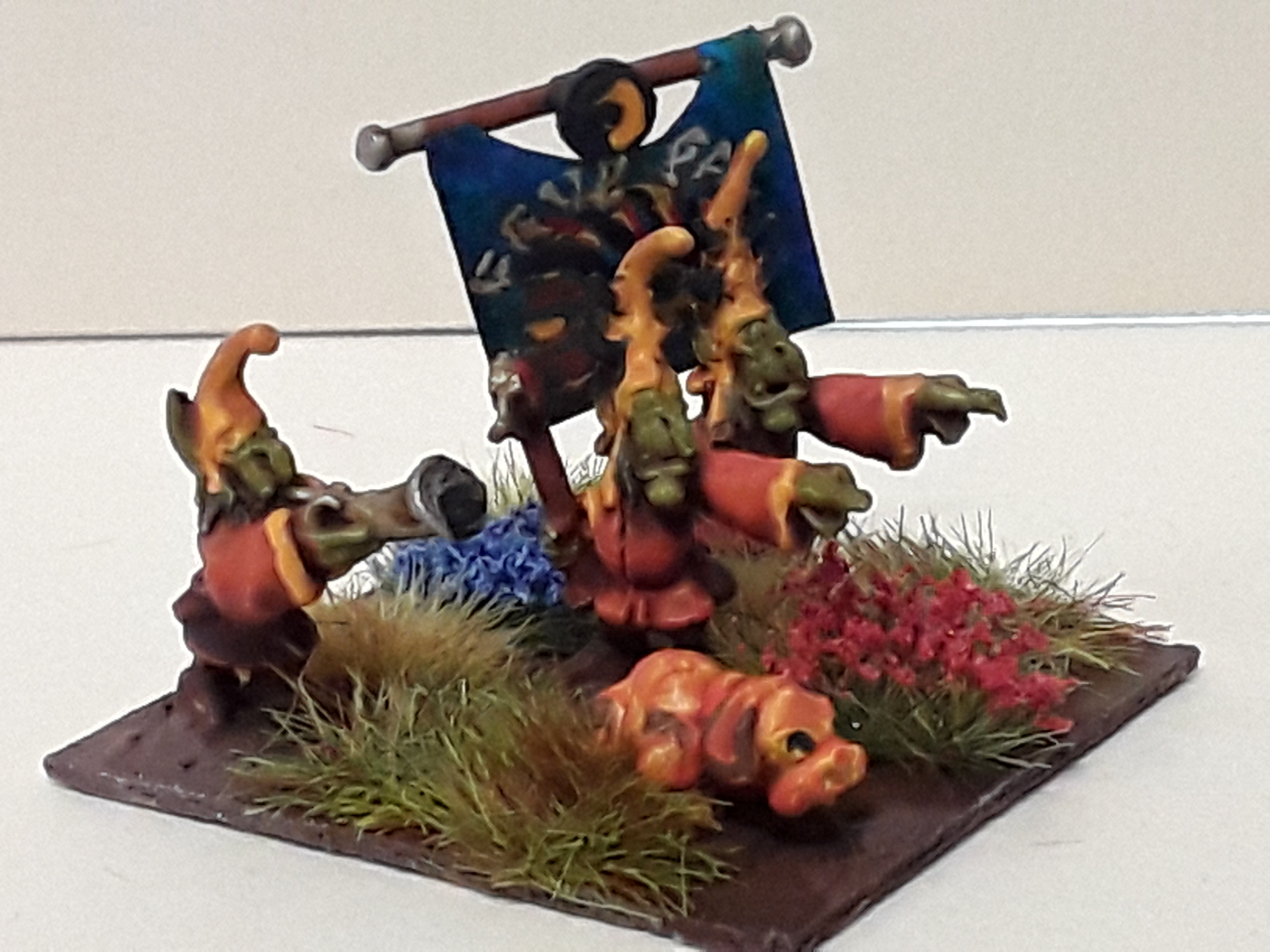 The noise of battle was slowly ebbing away. The warriors sought out and massacred the last of these pathetic villagers; many of them the old men, women, children and the sick; far too feeble to put up much resistance any of them. It did not matter they would all die one way or another.

The Warlord Dun-Khan had come to this isolated human settlement for a single reason following the wizened and gnarled nose of his one truly trusted companion who now thrummed what passed for a contented purr at his feet. He was determined to find what if anything they knew. Dead or alive they would give up their secrets.

He pushed aside the folds of material at the entrance to the biggest of the huts within the now breeched palisade and entered uninvited. A cadre of shaman lead by the grizzled old Volsnik Smokebreath stood waiting his command. In front of them an terrified maiden was tied unceremoniously to one of the upright pillars which held aloft the thatched roof of the dwelling, dressed in what passed for an opulent gown out here in the wilds Dun-Khan presumed with some certainty that the female had been the wife
of this places Head-Man, that was until Storm Bringer had sung expertly in his skilled if gnarled hands and reduced the chieftain’s skull to a pulp. The woman glared at him, hatred in her eyes, she had a good idea of what was coming to her he thought; but he cared not. The Warlord knelt down to the level of the harsh shaggy mop of ginger brown fur that had followed at his heels and he whispered, “This is the one that will know where we can find him.” and for what in Tjubgob society passed as gentle ruffled the
unkempt mop.

A single cruel green eye pierced the gloom and knowingly winked, it’s twin having long ago been extinguished. The trusted companion known amongst the clan as the Kor-Key let out a long hiss in the woman’s general direction, bared its fangs, pawed the ground with outstretched claws.

Dun-Khan nodded his ascent at the waiting shaman and the Smokebreath began his work. No need to stay amid those noxious vapours, the Warlord left them to it with Kor-key trotting along behind. If these villagers knew the whereabouts of the Mon-Tee or where their soldiers had taken him they would not keep the secret for long. Even now the billowing fumes spilled from ill-fitting window frames dotted about the hut and cascaded down the thatch after spilling unceremoniously from the chimney stack. A
pained coughing and a gargled scream filled the air amidst the broken and shattered corpse of what until minutes previous had been a prosperous farming community, now beaten and bloodied a home only to the seeds of death.

I have painted the warlord Dun-Khan with his faithful companion the Kor-Key and their personal banner bearer with the Grub Paw standard. This Grub Paw image is the official emblem of the real Corky who is a ginger cat who often features on my Youtube videos. He has long fur which is also on his feet so when he has been out in the fields and it is raining he comes home with muddy paws. Usually just after I have cleaned the floor!

Looks great! Its a pretty hord you have assembled there.
All hail Dun-Khan, Lord of the Storm, Master of the Steps, King in the East etc etc…

The Mon-Tee in real life is Corky’s brother Monty who is a black cat! Quite a bit bigger than Corky but also younger!
I am considering which model to use as the Mon-Tee, maybe one of those Squig like creatures, or perhaps just another dog, but black!

Tjub, you need to sculpt a couple of Goblinesque catz! 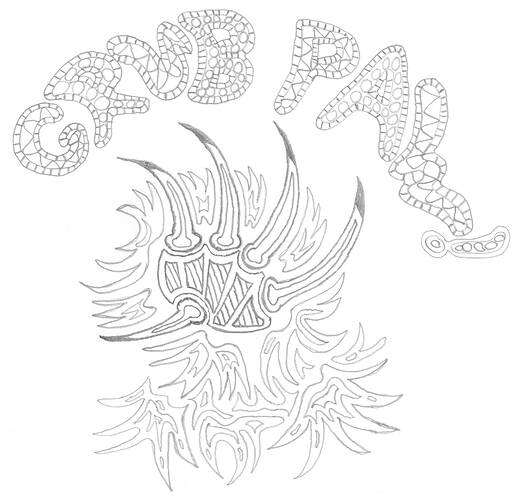 This is the actual Corky (the cat) Grub Paw symbol that we use in all his official communications, such as birthday cards etc!

Here is the 4th Tjubgob regiment, the sneaky ones backstabbing ones. 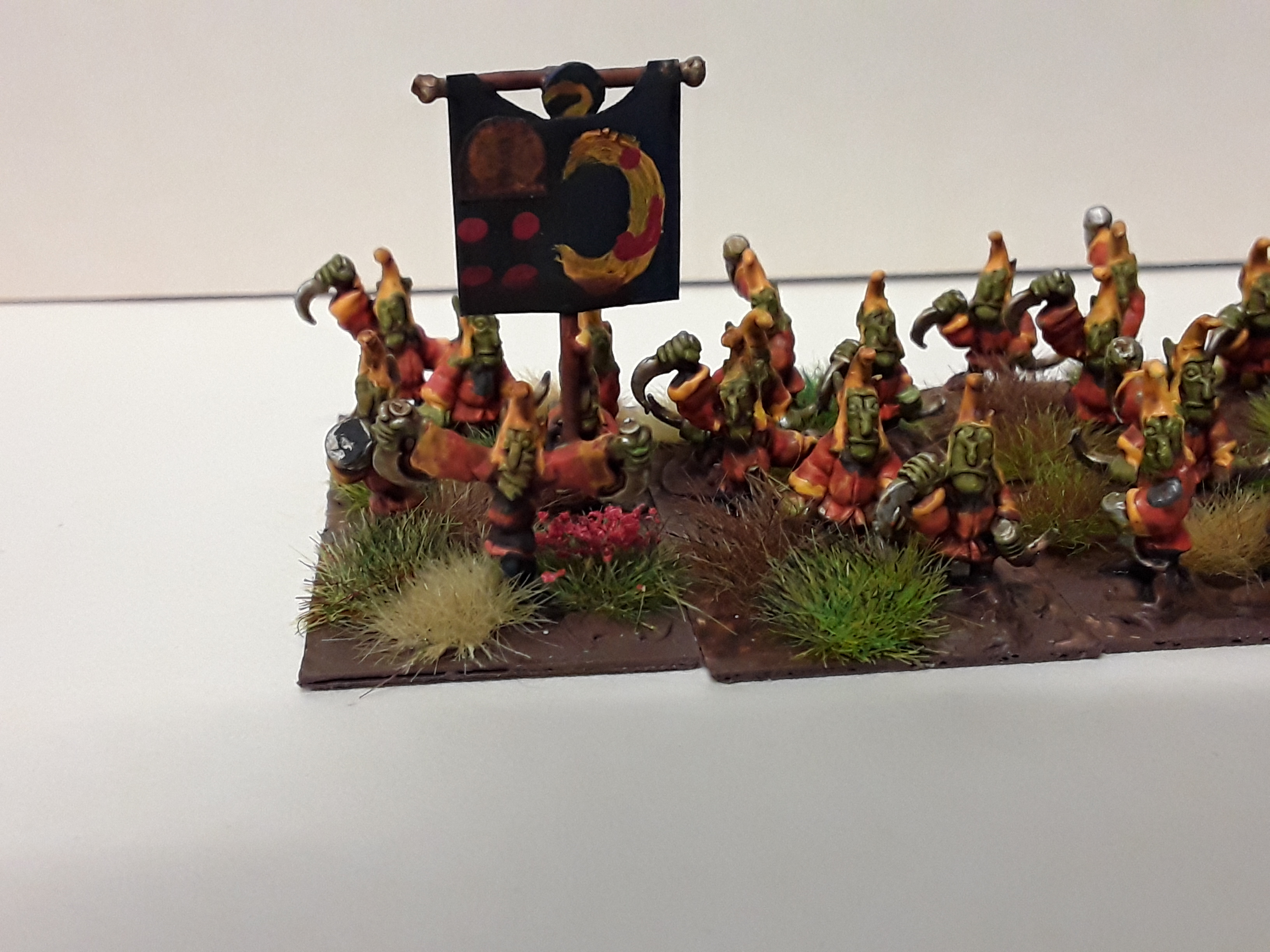 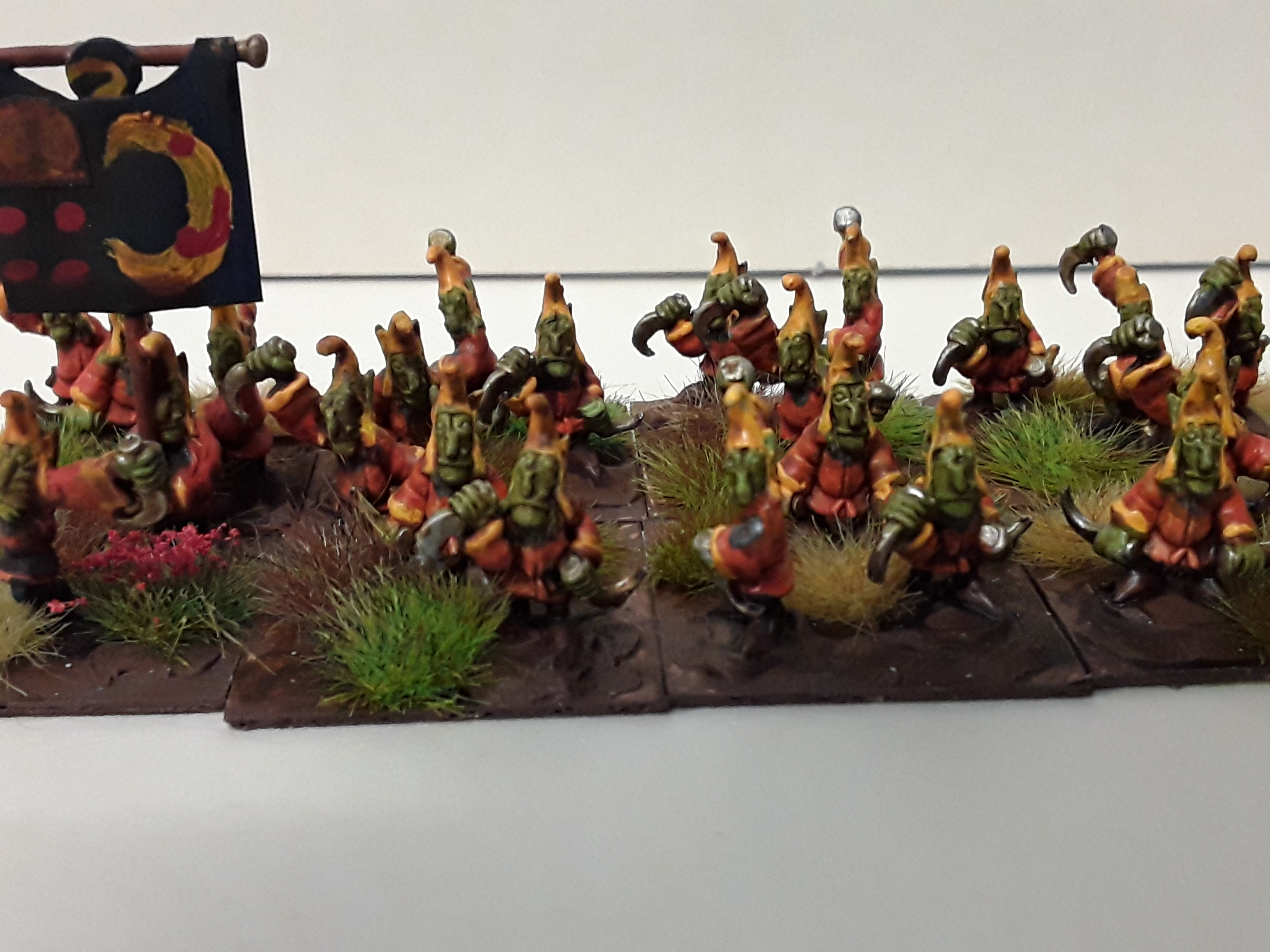 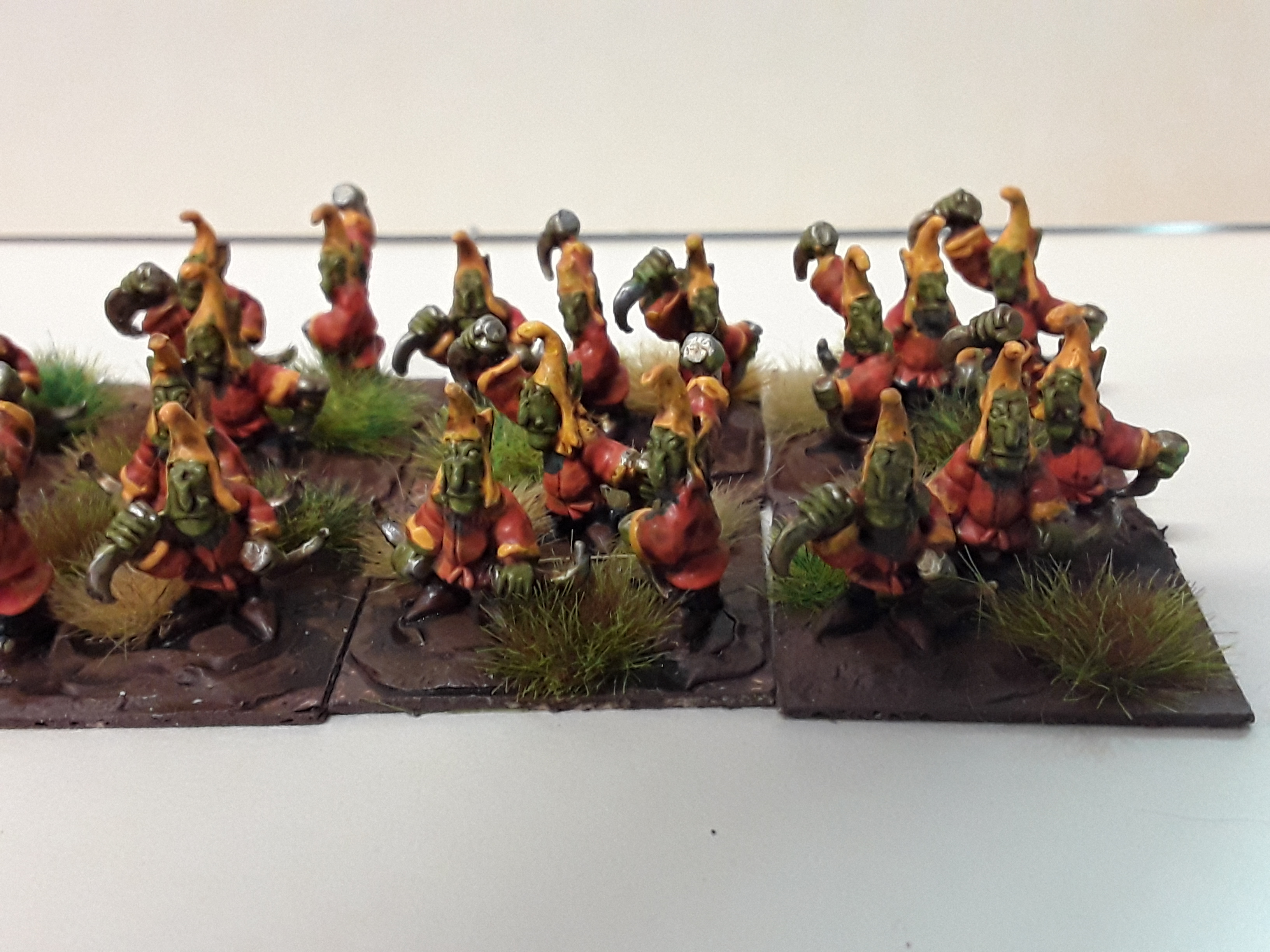 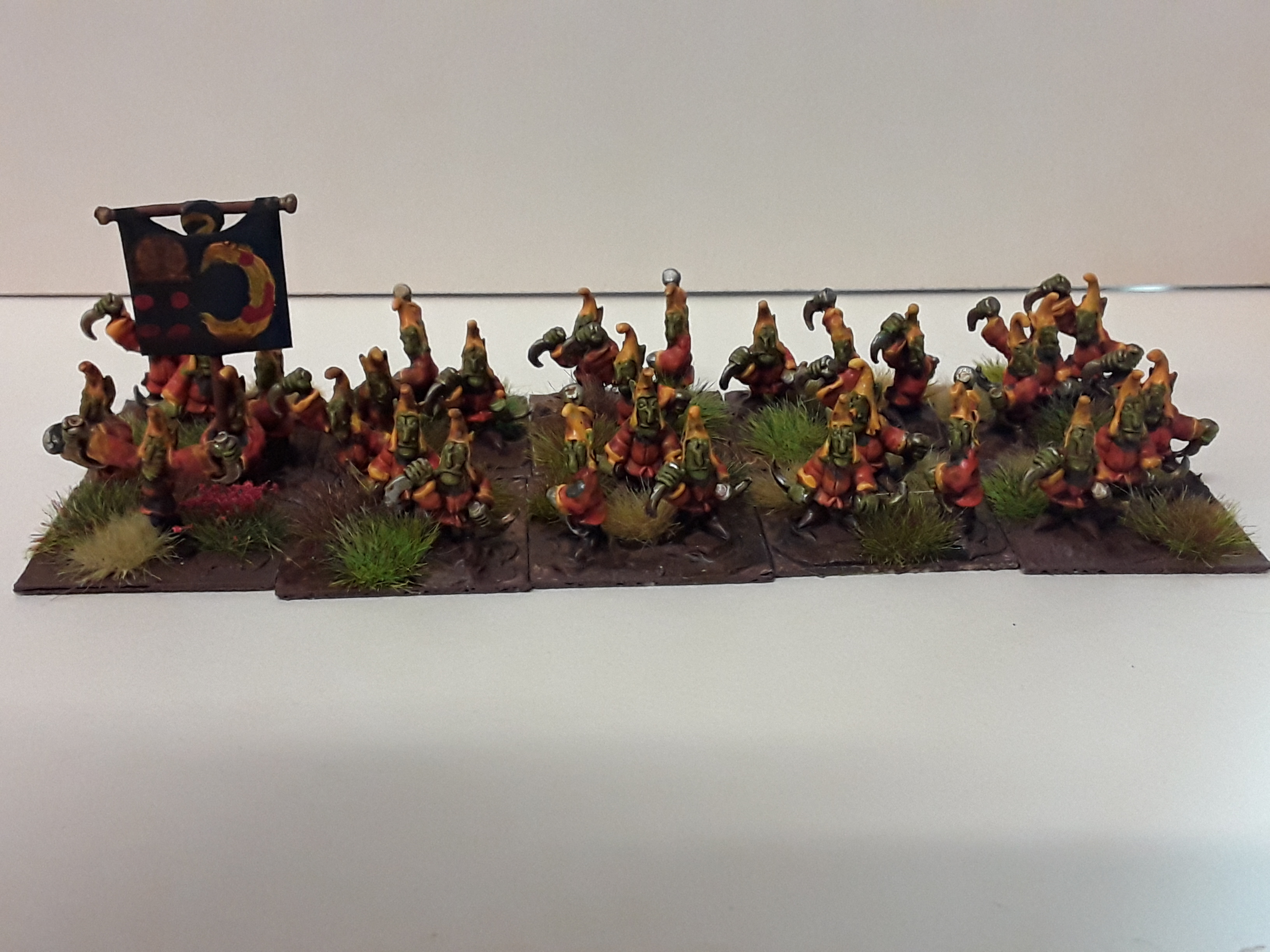 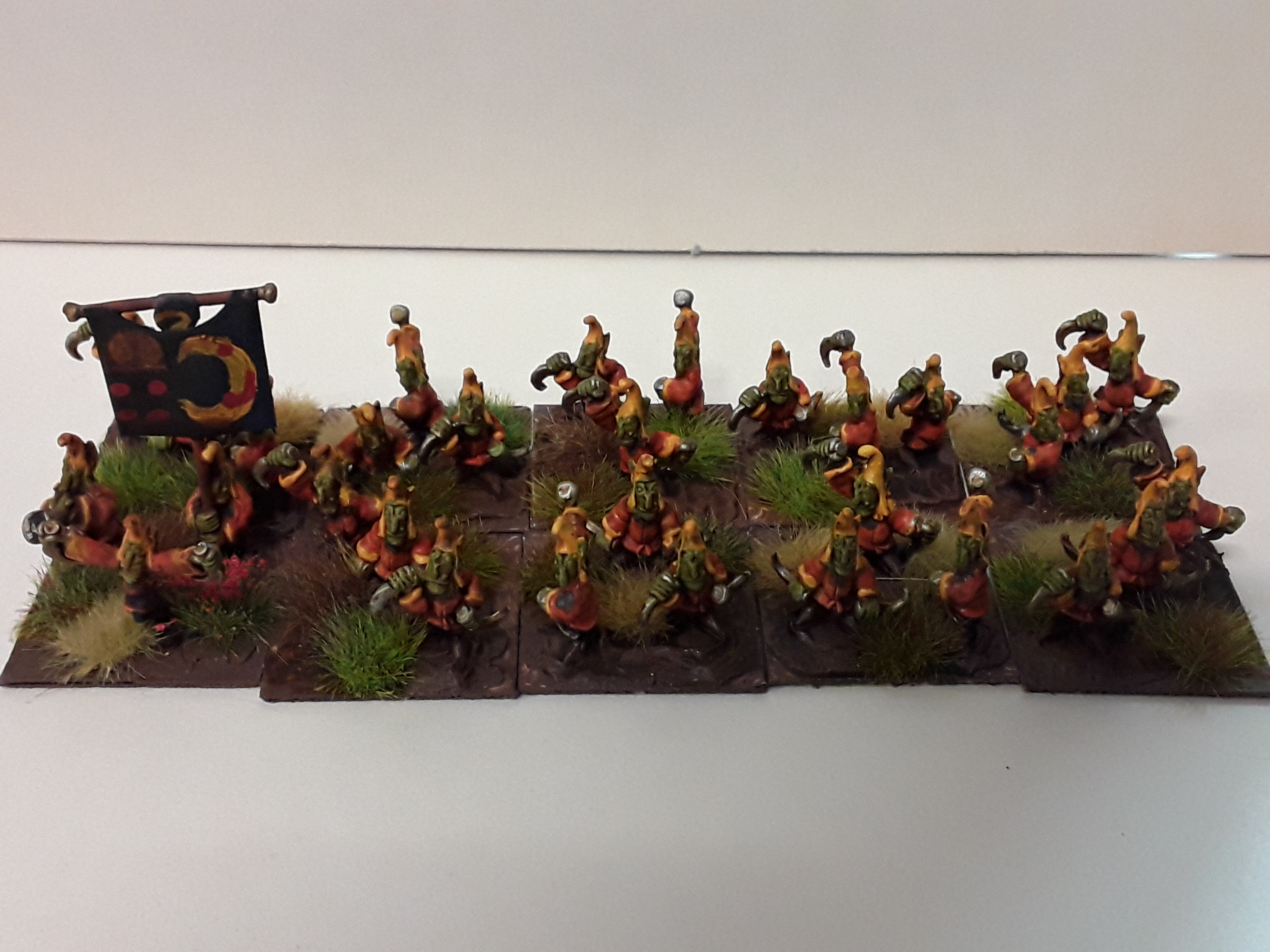 There are a few painted (but not yet shaded or highlighted.) Awaiting ideas of what to be used for? I have a couple of ideas that I am thinking about but am not yet 100% certain. 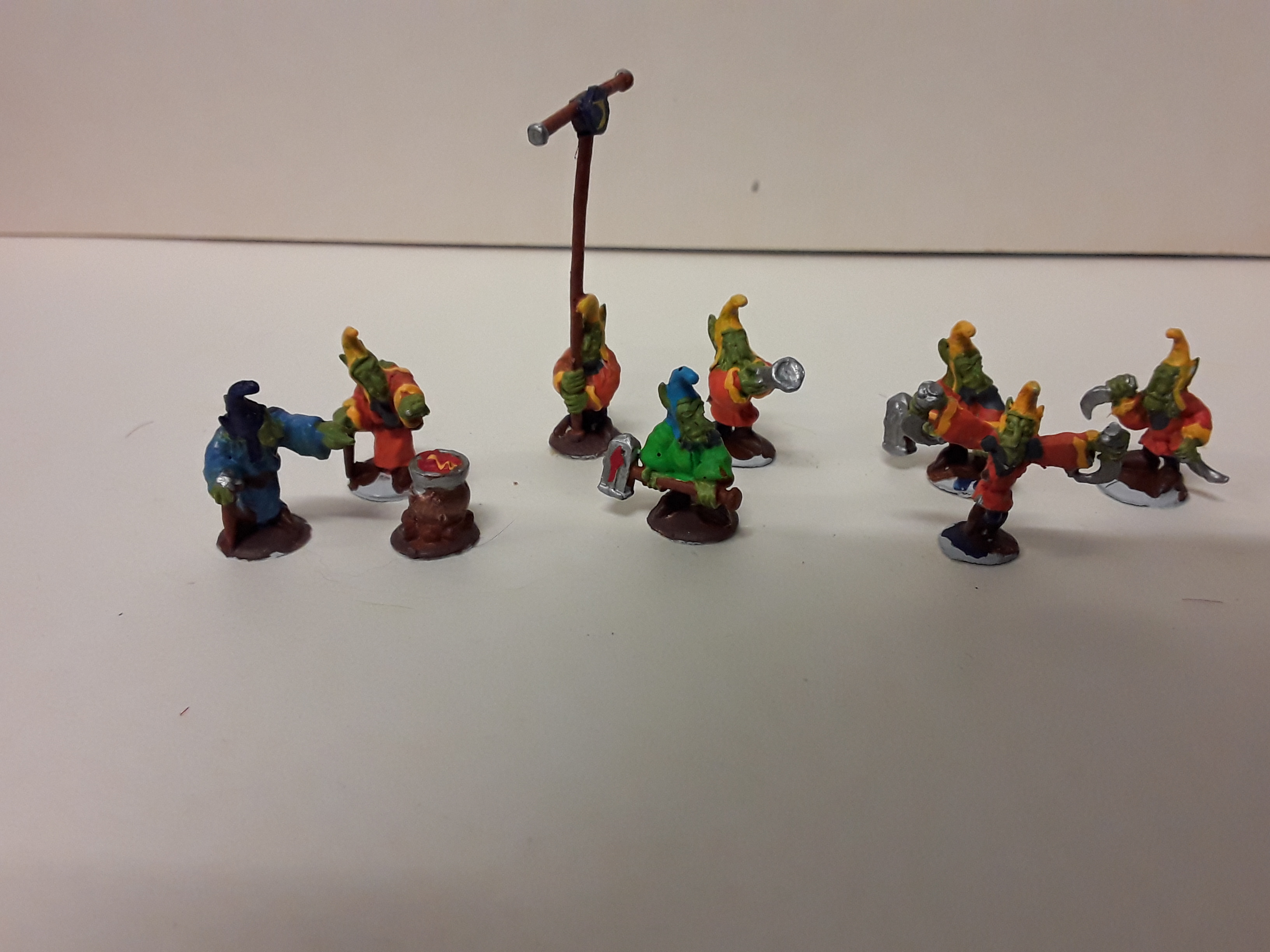