Great stuff, they have a fantastic look to them! love the barding, stunning job

As stated so many times, your work and this blog is epic! The amount of and level of your conversions is really impressve to say the least. Such a huge commitment. 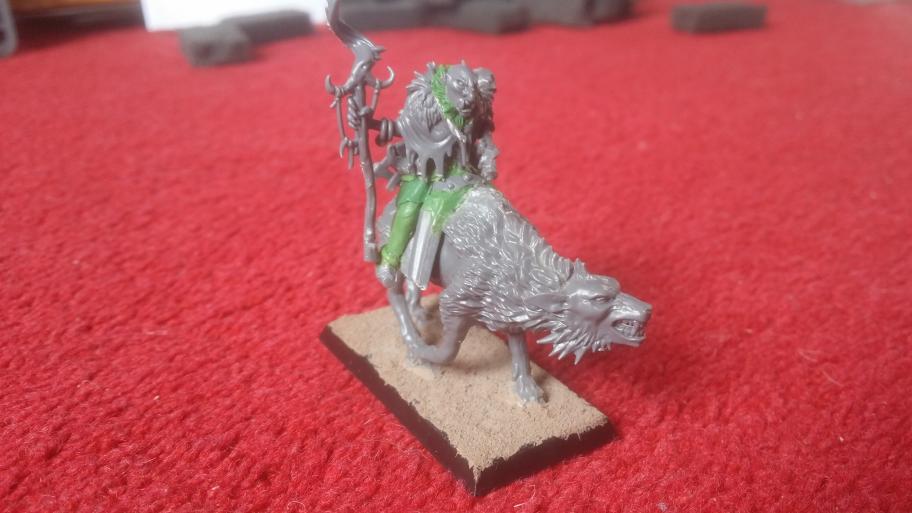 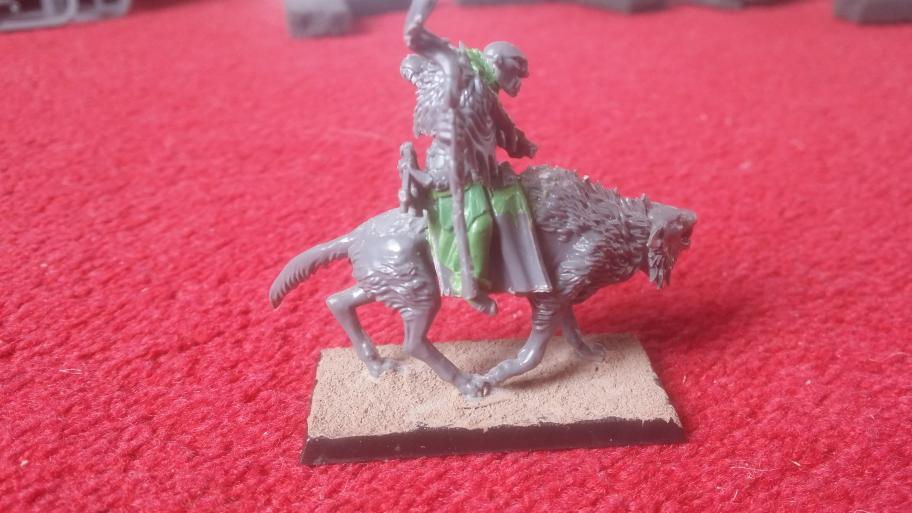 Two angles of my Hobgoblin mage. Built from the Loonking model, with a Hobgoblin head and a Hobbit Warg mount. Lots of careful sculpting to recreate the robes around his legs. He also has a nicer back to his saddle, courtesy of the Skumdrekk model, to make him look like he has more status than the actual light cavalry. 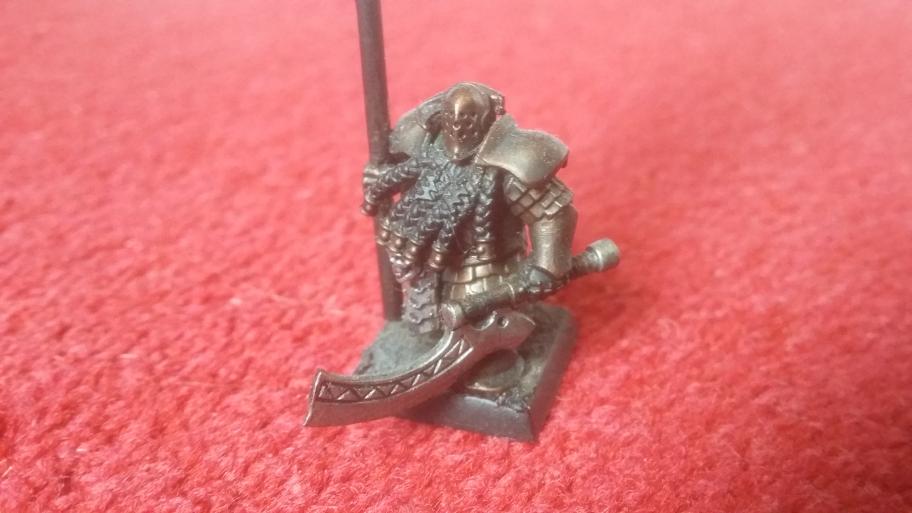 Battle Standard Bearer. Not happy with the top of the banner, so I kept it out of shot. Plenty of work here to make him look as close to my other infantry dwarves as possible, but still clearly a character. The great-sword is from the Tomb King rider from the Sphinx kit, but with the top trimmed down to make it more stout and a little less elegant (also a cobra symbol does not match the army). Then I pinned it to the weapon shaft. I am quite happy that it looks very close to an actual Assyrian sword. 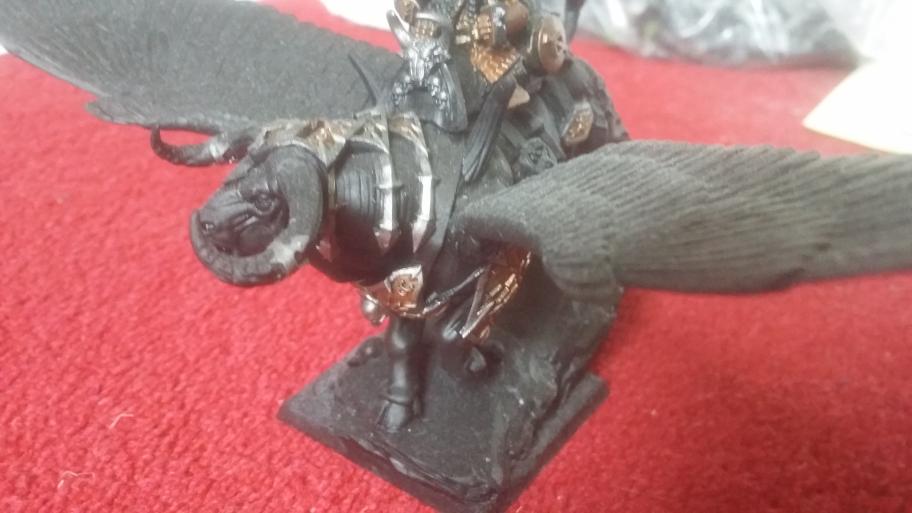 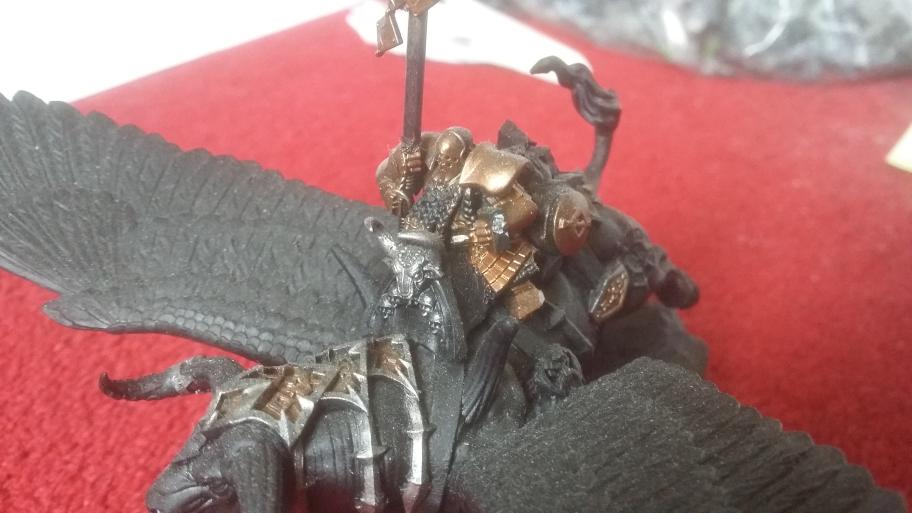 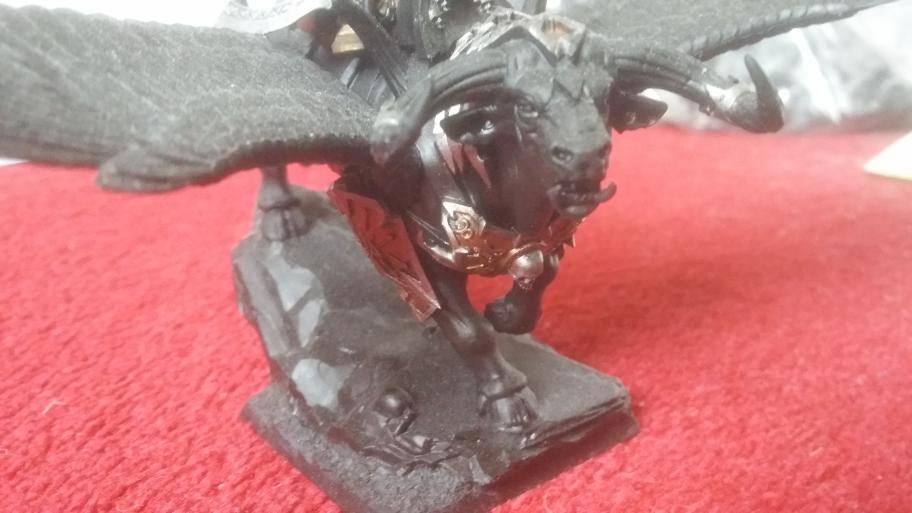 A very similar bsb model, but this time mounted on a bull. His odd pose is because I have not glued his shield on yet (and won’t until he is fully painted). Also while you can just about see it in the last pic, he has a near identical sword to the previous model, only strapped to his waist.

There was a lot of feather sculpting on the bull at the base of the wings, as it didn’t come with any. So I had to use the ones from the Island of Blood High Elf Griffin, as they fit the best.

And yes, he is dusty…I will give him a brush-down later.

Utterly mad and inspiring work as always. Seeing your work always makes me wanna hack some things to bits and mosh ‘em together.

Well, looks like my constant need to improve has cycled back to my Hobgoblins. In the form of wanting to further make their design more obviously Persian, I decided to ditch their current helmets (which I thought were too much like Western European ones). This means many models needed changing, but the end result should make them appear more cohesive visually, AND I chose slightly smaller heads, to make them have a more realistic proportion, similar to my Chaos Dwarves. 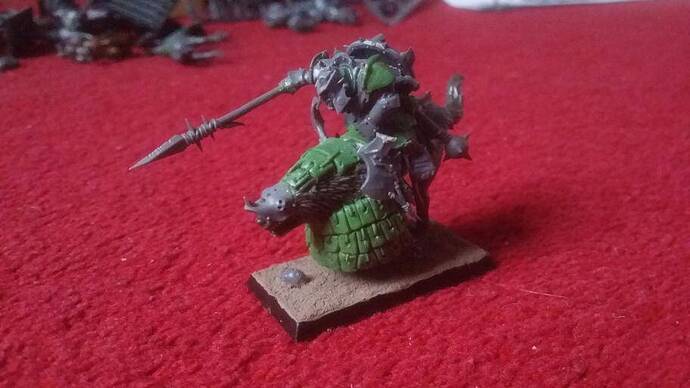 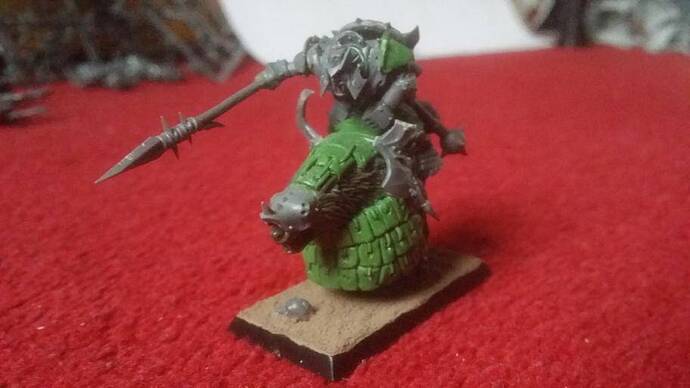 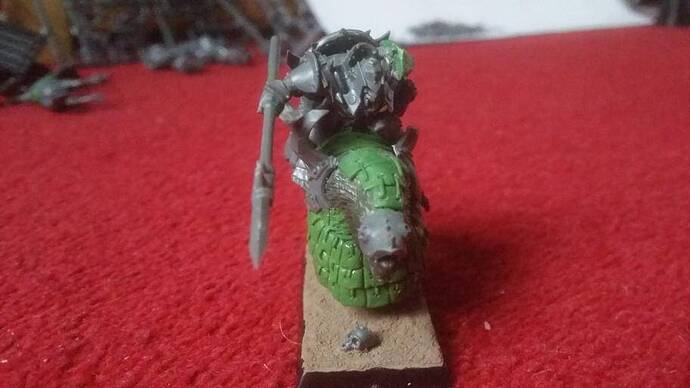 A Hobgoblin Cataphract when I tested the first new helmet. As you can see, I picked the new GW Hobgoblin heads, which thankfully are so numerous per box that I had enough even for my massive unit of greenskin heavy cavalry.

Plus some leftover for… 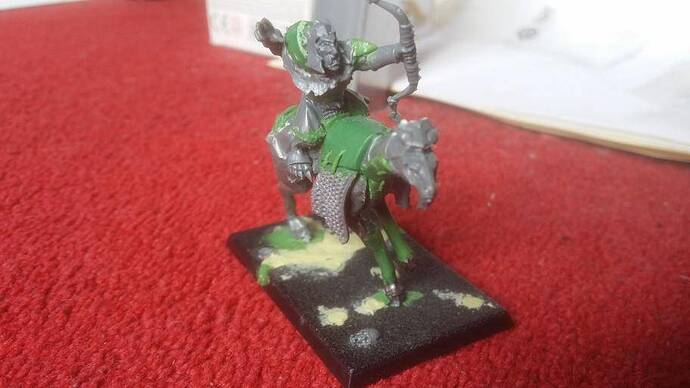 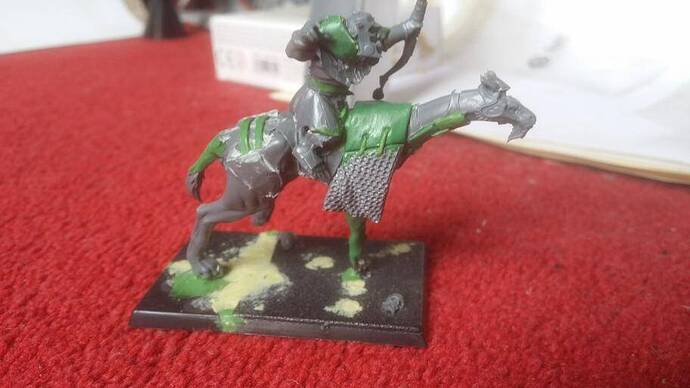 Thankfully when comparing these heads to the Night Goblin ones, they do not appear to be much smaller…I think. Well, I hope. I really do not want to re-do 40 painted Spearmen…

Amazing work! Is it for Age of Sigmar?
I stopped paying attention after 8th, and am now working on an Oldhammer project that won’t go past 5th ed. So, yes, I’m a bit out of the loop!

It’s actually for The 9th Age. Which is essentially like oldhammer (ranked up units, square bases etc), but carried on and is kinda its own thing now.

Hadn’t heard about “9th Age” is that sort of like 9th edition?
Is that the fan-driven continuation of Warhammer Fantasy Battles?
It sort of look like it has tacit approval from GW, but I haven’t investigated.

It’s sort of like 9th edition. It’s a fan-driven project, with free rules and frequent updates. Here is the website, which should explain things better than I can: 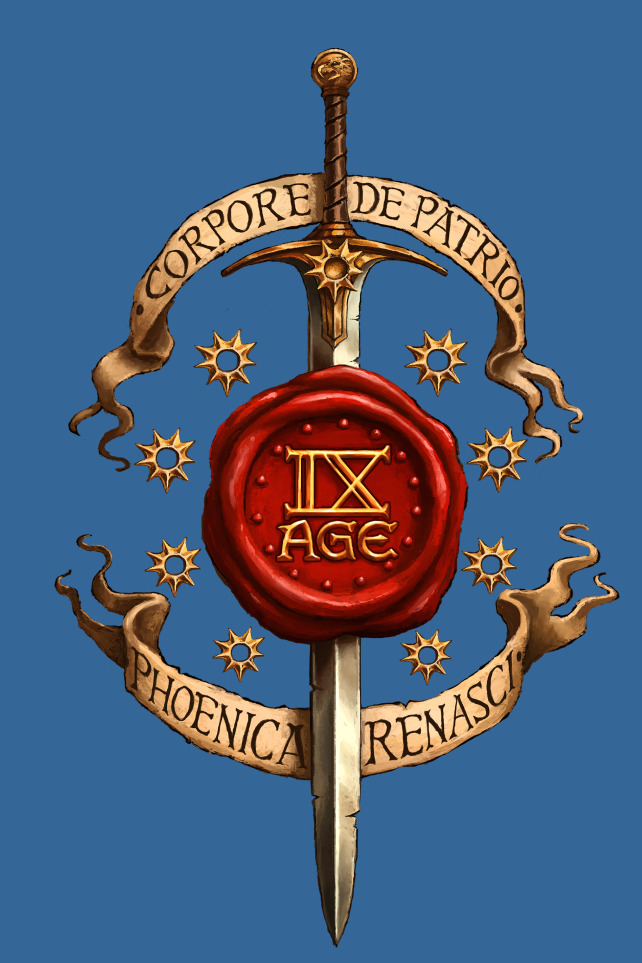 A wargame by gamers for gamers.

One cool part is that there are “Auxiliary armies”. They are sort of like old White Dwarf armies in that they have units from another book, but they take it in a different direction. Like a more Norse version of Warriors, and a pure Hobgoblin army for example.

Sorry for intervening, but!
T9A is so much not oldhammer!
This term is usually used for 4th/5th edition, sometimes for 3rd edition. With 6th/7th sometimes being called middlehammer, or even 4th/5th if you only consider 3rd as “old” resp.
T9A is based on 8th which was the last official WHF edition and thus the opposite of old (or good, but this is a personal opinion).
There are other unofficial successors, developed from different official editions, but I wouldn’t even call WCE (based on 6th/7th) “oldhammer”.
About all of them have Chaos Dwarfs, btw., because as soon as you disconnect from selling models for your rules there cease to be a reason not to.

Lovely conversions as ever!

Many newer hobbyists refer to WHFB editions 1-8 as Oldhammer, as in not Age of Sigmar. Calling it Oldhammer will be perfectly intelligible in this context; square bases, angles, ranked regiments.

Yet the most widely recognized formal classification goes like this, used for both forums and facebook groups:

Just to add that I am still alive. I have just been bogged down with exams, covid…or rather covid+exam. But I have been working on some short & angry stuff. Such as a rework of my Hobgoblin light cavalry, with much better poses and detail (don’t worry, I kept the awesome Hobbit Wargs). Plus some interesting takes on Hobgoblin unit champions. So stay tuned…

Ah nuts, let’s give you guys something to chew on 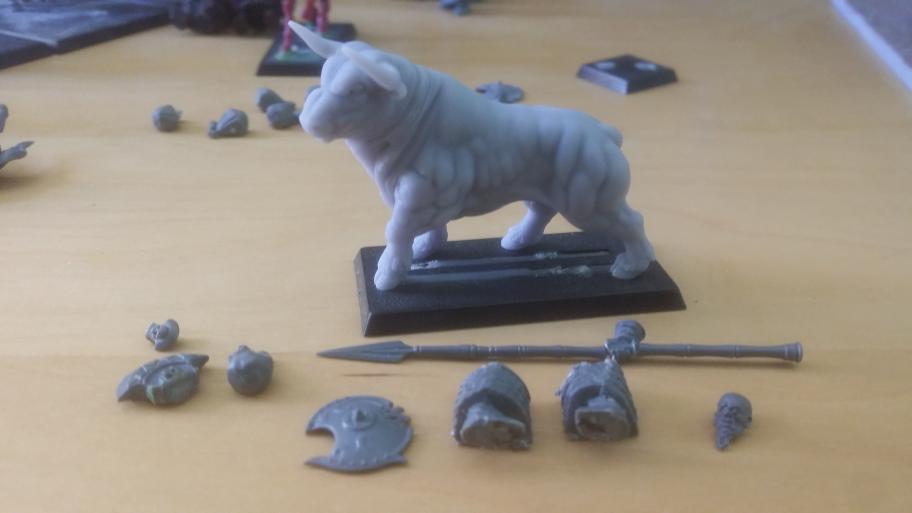 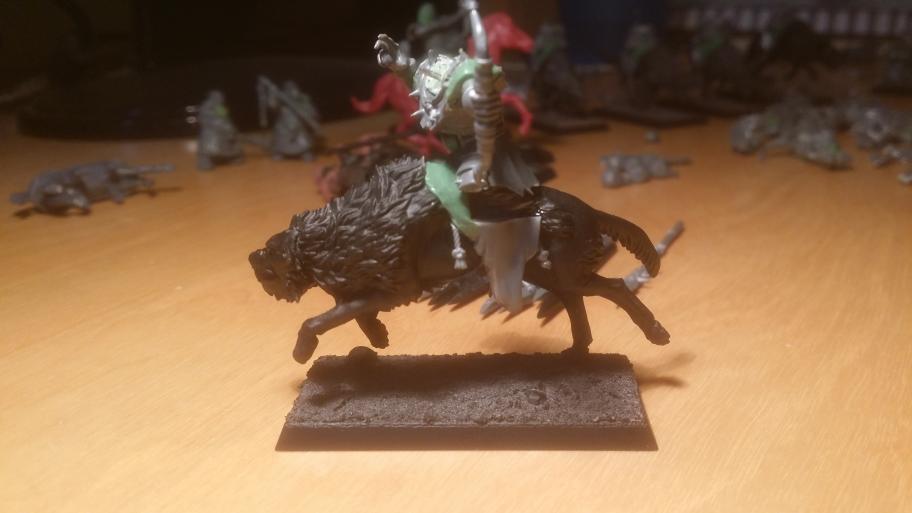 Oh man im really excited to see these come together. You never disappoint!

Also, hope you have a speedy recovery. Covid bodied me for a solid week. I can’t imagine doing that and exams.