INTRO
When I first rejoined the minis scene I prided myself on keeping my pile of shame quite small. But then came Chaos Dwarfs. And then came 2020. And now I have amassed a backlog that is promising to explode if I keep piling on projects at the past year’s pace. So here I come for all that paintless pewter!

This will likely mostly mirror my (soon to come) Chaos Dwarf proper blog but will also serve to capture my Saga and Stargrave projects. Looking forward to the challenge!

Starting the year off with some purchases because I am an incorrigible collector. 2 marauder orcs to finish off my slave unit, a skeleton to go towards an undead Saga warband, and a Dark Elf because I’m a sucker. 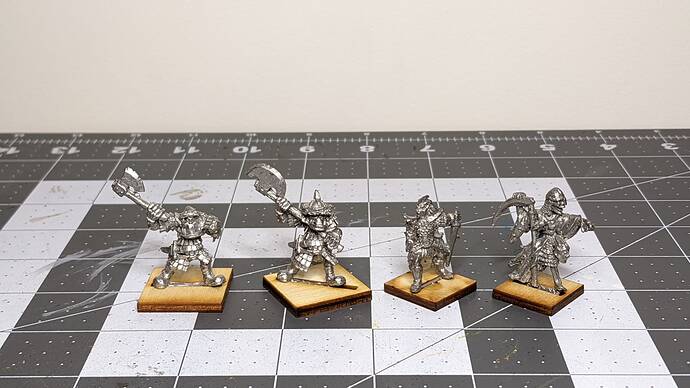 That said I am currently layering/highlighting a unit of archers for my lords of the wild Saga warband and they should be finished soon! 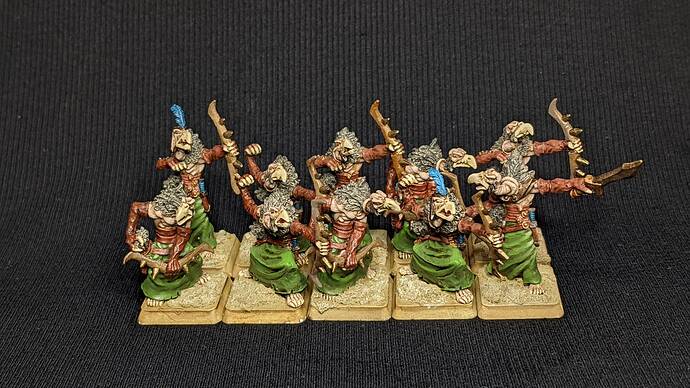 I had just finished base coating my Lords of the Wild list for Saga last year and am going through and doing layers and highlights at the beginning of this year because I’m forcing myself to finish (painting) projects before starting new ones. Fully painted armies from now on! But because of that though I’m counting all my LotW at half points. So here’s a -5 to the score!

End of January warp up is less hopeful than it started. I’ve finished the greys on my unit of Lords of the Wild hearthguard but wasn’t able to finish them up by the end of the month.

On the other end I went hard on the purchases at the end of the month. I’ve decided on and started buying 3rd edition Dark Elves for my Great Kingdoms Saga list, wrapped up the buying for my Horde list, and picked up a couple third party CD sculpts. The one ray of hope here is that there is only one faction from Age of Magic I don’t have yet, so there’s only so much more I can buy… right?

And finally I was able to trade and sell the extra chaos dwarfs and hobgoblins I had gotten from bulk buys while collecting my big hats. Between buys, sells, and trades this month I came out with a shameful net of 19. I’m going to have to figure out how to paint faster if I’m going to come out ahead this year!

In negative news I completed all of my hearthguard, warlord, and sorcerer for my LotW Saga warband. Similar to the previous unit I will be counting them at half due to starting them last year for a total of -6 points. Pics to follow…

In positive news I was able to find 5(!) Dark Elf Cavalry (though only 2 Doomsteeds), 2 mounted Melniboneans, my first Azireth Darkforce sculpt (v4), and 7 other elfin sculpts for my Great Kingdoms warband. I also backed a kickstarter for a lovely pair of models based on Ian Miller artwork bringing my total new models to +17.

If I keep my nose to the grindstone this month I should be able to knock out my unit of levies. Here’s hoping!

12 levies down! That’s another -6. 7 more purchased though… So close to a negative score this month. I was making really solid progress in the beginning of the month but have been on a nice long vacation since.

With these levies down I am only 8 warriors, one monster, and one character away from starting my Chaos Dwarfs! I’m really getting excited for them. My most recent accounting puts me ~100 pts shy of a full 2k collected!

Built a little light box and decided to catch up on the units finished this year with it. I realize now that I forgot the levies, but who doesn’t.

This poor Saga army has seen more than it’s fair share of abuse already, and is the reason I went hard on the movement and storage solutions early on with my Chaos Dwarfs. Not long after finishing everyone I had to make a hard stop while driving back from a game and my previous case hit the floor of my car. The foam padding wasn’t particularly snug in that container and many of them ended up with nicks.

After doing my best to repair them I picked up a carrying case made by filling a DoorDash-style food carrying bag with plastic trays. Most of the trays were lined with a no-slip padding so I popped the army in there without a thought. Well it turns out if you don’t take something out for a few months, that no-slip pad gets quite sticky. When I pulled them out again most models saw some kind of damage as the paint stayed stuck to the padding, and not in the usual, easily fixable places.

At this point I have moved onto my CDs and count it as a lesson learned. They are still fine on the tabletop as long as you don’t get too close, certainly better than unpainted, and I learned a lot in the process of painting them that I’m using to improve my experience with the CDs.

As for the purchases for the year I stopped keeping track. A good number of slave orcs, an expanding collection of Marauder and early Citadel Dark Elves, a small but much loved group of Melnibonéans, some OG AdMechs and Imperial Robots, and I’m sure some more I’m forgetting. Chaos Dwarfs very much sent me down a path of collecting ranges and sculpts and learning more about individual scuptors than I ever imagined! 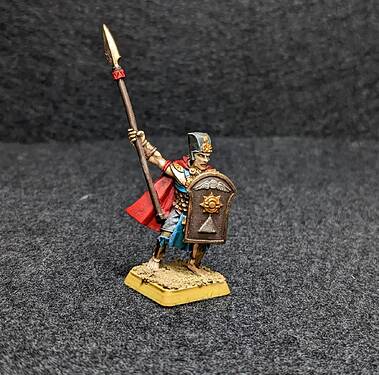 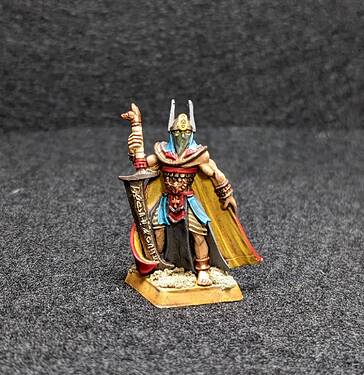 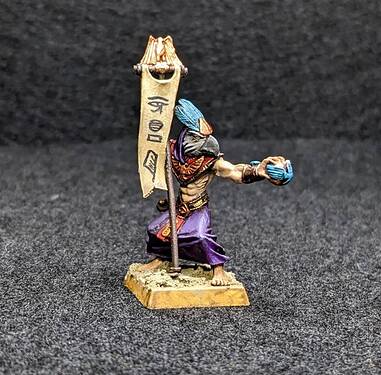 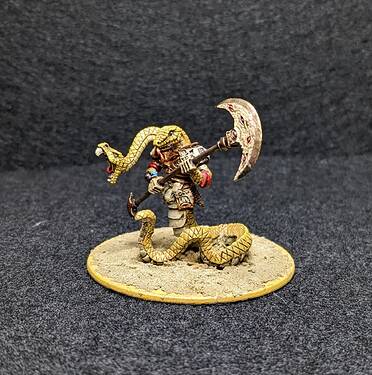 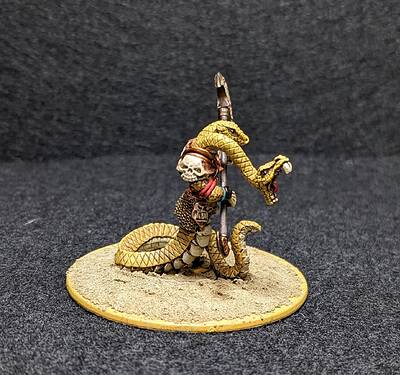 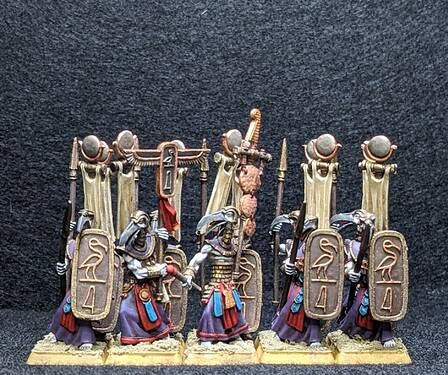 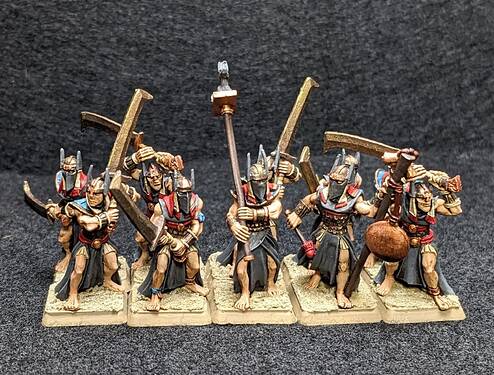 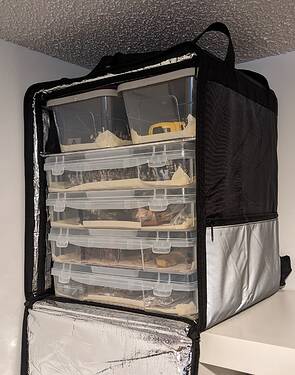 Nice storage! Will be great when you have full magnetization! Really liking the Ibis warriors too

Thanks, yeah and transporting armies will be a breeze too.

Those Ibis warriors were what actually sold me on the whole range, they’re really high quality.

Would love to see some pics of those Melnibonean miniatures. Those sound really interesting, and I love to see how different artists interpret them. I always kinda pictured them like dark elves, but I’ve seen lots of cool interpretations.

Really love the backdrop/ground in the foto, is it felt?

Yup, just black felt in a box with too much light. I need to play around with the settings and such, the minis look a bit washed out right now I think.

Would love to see some pics of those Melnibonean miniatures

I’m waiting on a few more in the mail but I’ll upload a pic of everything once they’ve arrived! Funny you mention the dark elves, these are old Citadel sculpts which got repurposed as their first High Elf line! They are definitely a darker take on a high elf though, more appropriate to the old lore imo

@MetalMatt Here’s the Melniboneans I’ve collected so far. You can find them listed on solegends here. I’m hoping to get a 1k list together of primarily Melnibonean sculpts, though unfortunately they don’t have a very wide range to pick from so I’m planning to supplement with some other Marauder stuff

Having thrown them on bases for the first time I realized I’m going to have some struggles ahead. I really hate putting guys in diagonal slots when they are looking forward but these are not meant to rank up any other way!

Also, I seem to have finally figured out a good camera setting - night mode with low light!

Wow, these are amazing. They definitely have that dark fantasy feel to them. I see Elric, and maybe Yrkoon standing next to him? Very awesome, I can’t wait to see how your force shapes up.

Left to right it’s Elric the White Wolf, Elric of Imrryr, and an early Elric prototype (later sold under a number of different names and IPs).

Yeah they are some of the best early sculpts imo. 80’s lines can be a real minefield of inconsistent quality but the Melnibone stuff (less a few of the personalities) are fantastic, and as High Elves these guys look like they might have actually fought back and won during The Coming Of Too Much Chaos unlike the later stuff haha