Lovely oil painting! It gives a heavy and foreboding impression.

If you look carefully, you’ll see that they have chains inside - the idea being, I think, of those chains holding the bull’s harness together and having been drawn so tight that they cut deep into his flesh. It’s a sophisticated detail and pretty grimdark

I had another look and… am still not convinced that the chains make any sense. ^^
They are very deep and covered by flesh and skin, and there are no harness parts where the chains are running.
Look: 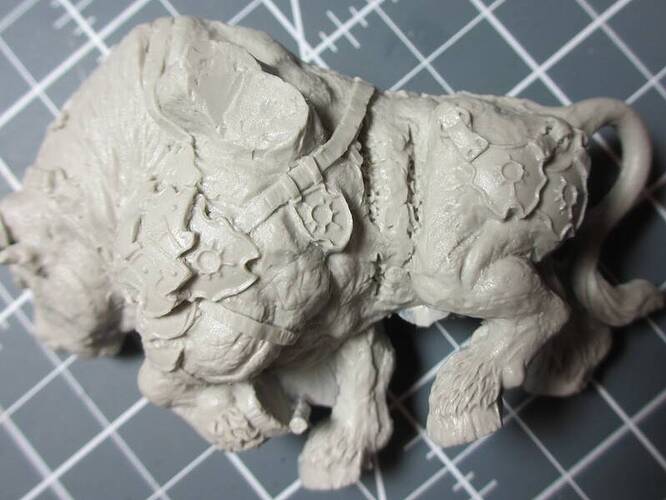 Not even close.
I think, yours had at least some armour plates in that area.
But all of the plates I see here are quite credibly holding and nice, soft and animal-friendly leather/fabric belts, no mysterious chain implants.

I mean, sure, I can just cover the details I don’t like and probably will, but I’d at least like to know if they had a plausible intention.

You’re right, mine has a whole bunch of additional plates. Seems as if the separately-sold version were less heavily armoured than the one that comes with the rider included. But come to think about it, even so the chain farther back does not seem to connect to anything. Maybe I had an easy time ignoring it because I was trying to speedpaint mine and didn’t put too much thought into what connects where

But if those rifts seriously annoy you, you’ probably won’t be having any problems filling them with some putty.

Yeah id fill those crevasses too. Still a good model. You will never know once painted

Back to the trist and colourful parts of the hobby.

I was painting with artificial “daylight”, deliberately too colourful (because the result in real light is often the opposite), with a new variation of the paint choices for the two metal layers, and the result looked like this the next day: 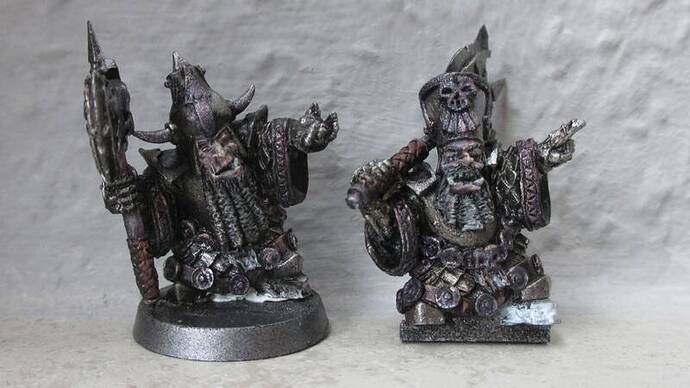 Next to the older two attempts:

And after some desaturation of the layer with violet layer they now look (about) like this:

I think I want this layer a bit darker still, but if you agree, the colour scheme can almost stay. It will need a few little details in a different, perhaps bright colour that has to be found still.

You can also see the difference between oil and acrylic, as the faces are painted in acrylics and a lot less smooth as they could be. They’ll probably get a layer in oils, too.
(The dark-red-brown leather are still in acrylics.)