After being inspired by @HashutsBlessing to battle the gray (or in my case green) pile I decided to start a new thread to keep track of new additions and painting progress starting now.

I will also keep my initial army trhead up to date!

Atm I have 3 new additions to show you.

I have lots more to paint but as I said, these are the additions since @HashutsBlessing started this idea.

I feel like you should be collecting munchkins from the emerald city with that colour of resin. The cannon looks great. The hobbo looks good but a bit big maybe? The lammasu looks great too. A pleasure pain thing to paint these lovely translucent green things eh?

I actually haven’t checked side by side with the other models I’ve printed. I’ll do that tomorrow.

I like the green resin. It shows good detail and its translucent enough to be able to glue parts together with some resin and a uv led flashlight.

Lots more models in the other thread. They are a joy to paint. For some reason its more satisfying then bought models

Well… yes . Its big… ill have to print that one again… 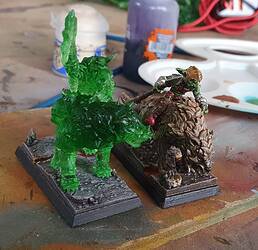 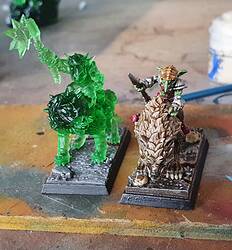 Very imposing for a goblin wolf rider. Looking forward to see it painted

It would eat other wolf riders for breakfast

Another addition, a BSB! 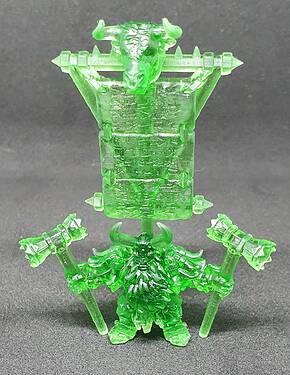 Recently printed him too! Lovely mini ain’t it!

Yes, he is great. Very mean look on his face

Absolutely fantastic and welcome to the fold of those in competition to keep ahead of their gained models with completed ones!

Willbe keeping an eye here and there for sure.

I have not had a lot of time these last months so most of my hobbies are on break.

My printers are not printing because my wife is working from our home office where my printers are and gets a lot of calls. She also does not have my tolerance for the noise they make

Also, painting is at a stop due to first being sick for a few weeks, nothing serious but enough to take away motivation. Also not a lot of tree time with work, kids and preparing out garden to be paved.

I do feel the need to paint again but first I need to clean the junk from my warhammer room (yes, thats how its called. I tried to change it to war room, but the wife won’t call it that

). I am doing that bit by bit so I hope to paint something soon!

Anyways, at least my CD army isn’t growing while not painting!

Guess this does not count as additions… but I love being able to print 32 (2 printers) 40mm square bases overnight! 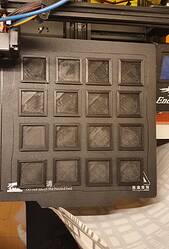 Two new models for the pile of shame!

This will not change my status quo because they got printed and painted in less then 24hrs, with 20 of those hours being printing… but they are new!

Some generic unit fillers. I plan on making specific ones for each units when I am further along but for now i needed some I can drop in any CD unit and have it look okay.

Printed in pla, 0.12 mm layer height and basing is not done yet!

Okay, so I did paint 32 dwarfs with blunderbusses buuuut I will abandon them for now because I printed them too large. They are impossible to rank up on 20mm bases. 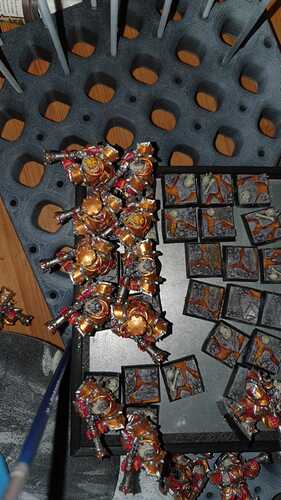 After about an hour of puzzling I gave up. I will print this unit again at 85%…

Do they fit on rounds for AoS? Or maybe some kind of terrain, painted in “stone” like the Terracotta Army?

They would probably fit round bases, yes. I’m not yet sure what to do with them

Not good… not bad… will do better…

Great shout from @tjub though, maybe some stated terrain or Mantic Games-like movement tray diorama base would suit them?