As some of you may know, a few years ago I came into possession of the core of a Big Hat army. It was a sad story which saw me inherit those models, and for the longest time I wasn’t even aware that there are Chaos Dwarfs slumbering in an unremarkable metal box. When I discovered that treasure, I was equal parts joyous, sad and ashamed. I ended up with a Lord on Great Taurus, a Sorcerer of foot, the amazing hero sculpt leaning on his axe, a death rocket launcher (oddly enough with two sets of crew) and a small unit of metal Chaos Dwarf Warriors with command unit. At this point I already had my Legion of Azgorh and wasn’t really sure how to best use the big hats. But of course that did not stop me from going on eBay and get an Earthshaker, Bull Centaurs and the other hero sculpt. From a user from the old forum I bought a group of Blunderbusses. I also found a second unit of plastic Chaos Dwarf Warriors with command, which I could split up to have one big unit of Warriors and use the command unit for the Blunderbusses. Oddly enough I found a Death Rocket Launcher without Crew, so that came in handy. And to my great surprise I also found a Lammasu for a reasonable price. I still did not know what to do with the army, and now I had some models painted in very different colours, but all in all it’s a very nice little force. I am still missing any Hobgoblins, but concerning Big Hats I feel I have what I need. Then came the CDO meetup and the BATG 2022. A plan was quickly hatched to bring my Big Hats to the meetup and have the army painted in time. Not all models will be in the army, but the goal is still to have all the models painted by April. I meticulously stripped the models with Acetone and LA’s Totally Awesome and my trusty Ultrasonic Cleaner, I even disassembled everything down to the separate parts. I am very happy how this turned out. The 9 identical plastic Chaos Dwarf Warriors were of course super boring, but with the generous help of @MichaelX I could exchange the hats of eight of them with the 3D-printable hat pack. Awesome! Like with my resin models I used 2-part epoxy for the larger pieces, but was only moderately happy with the results. The monsters were fine, but especially the Bull Centaurs had some large gaps. I don’t think it was entirely my fault, since the parts didn’t even fit perfectly when dry fitting. I had to use lots of milliput and even file some stuff away, but the result is acceptable. Yesterday I had to be very quick with a rather shoddy priming session to make use of surprisingly good weather, but the coat is not perfect. The rest I can either do by hand or try again with the rattle can. Only models missing are the Blunderbuss standard, which has a broken banner, and the second hero, which will be converted to a BSB. Here is a group shot as it stands now: 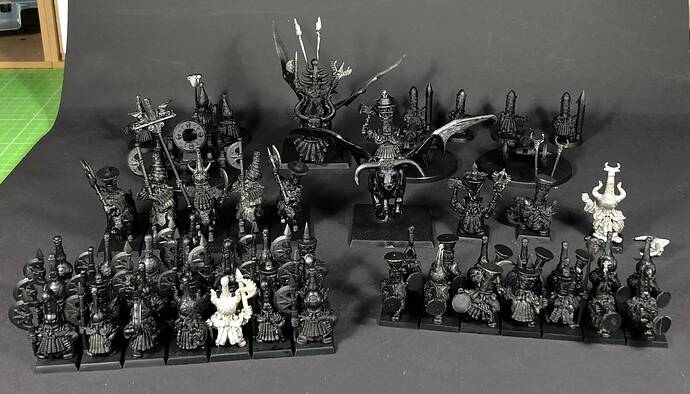 Here is what I have:

These models take absolute priority for painting. The goal is to have them battle ready by April, so I will not paint them to the highest standard. A good colour scheme, base coats, shadows and maybe one level of highlight, at least for the troops. If time allows, I will do more with the heroes, but let’s see how well this goes first.

I feel a great responsibility to restore and paint this army to the best of my ability eventually, in honour of my friend who started the collection. 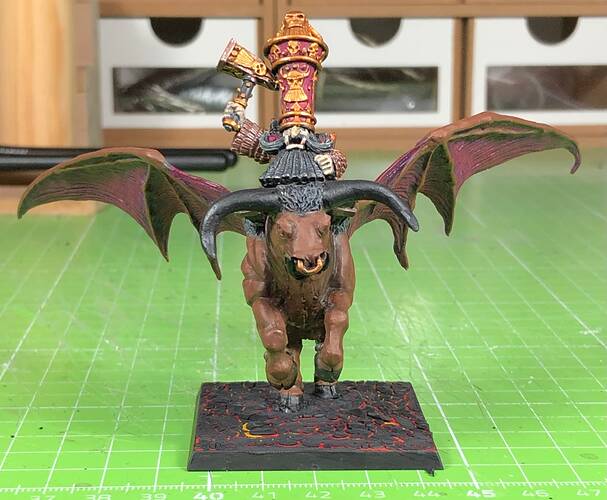 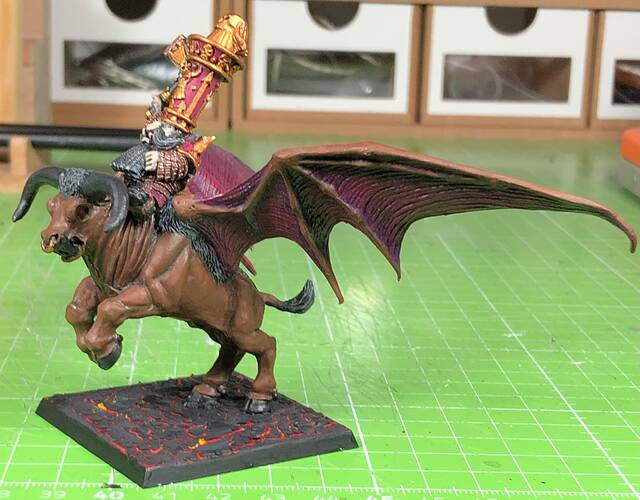 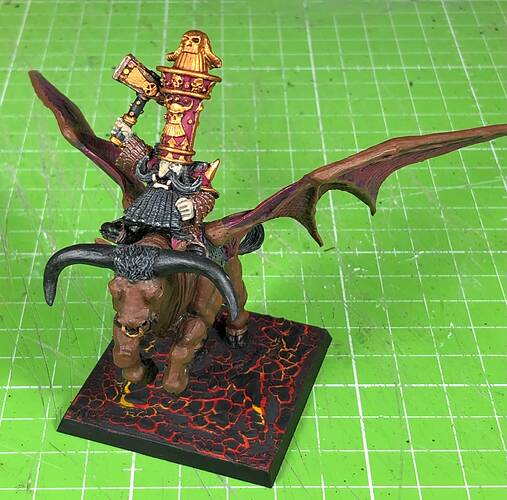 Ah, iconic Chaos Dwarf goodness. What a classic model. I spent a little more time on him than on the regular troop, mainly the skin and main colour highlights. I wanted to paint the Taurus in more “realistic” colours, originally I planned on grey. 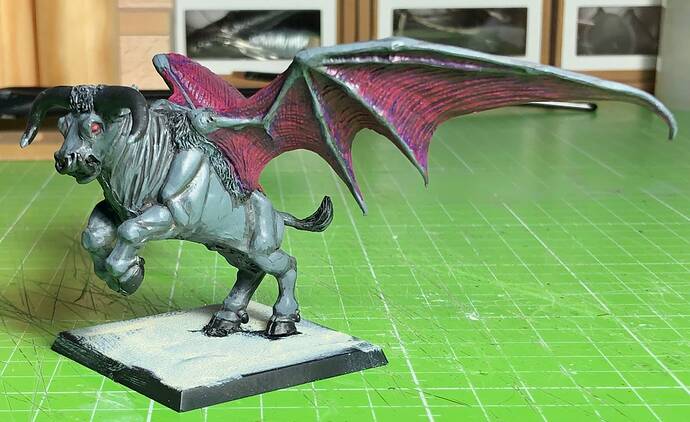 It looked alright on its own, but it just didn’t fit well with the limited palette of the other models. So I added another highlight layer of codex grey and mixed up a glaze with Bestial Brown and Scorched Brown to use the existing gradient and just shift it towards brown. It worked rather well. A last pin-wash of Agrax Earthshade sealed the deal. 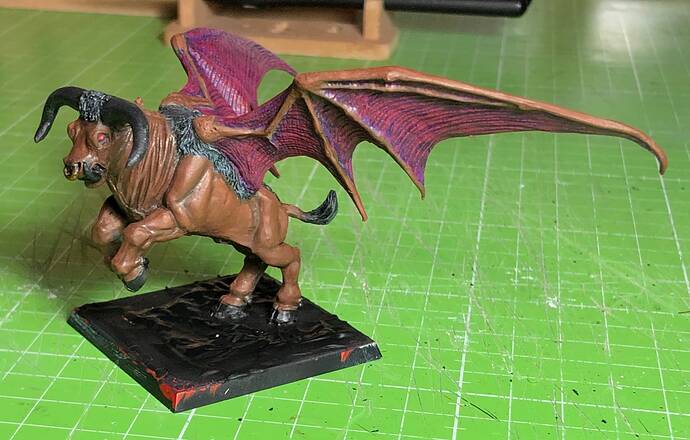 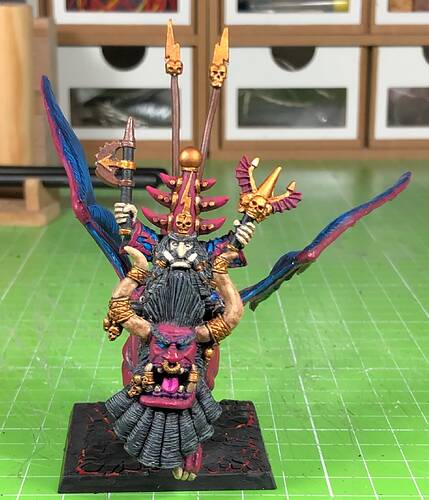 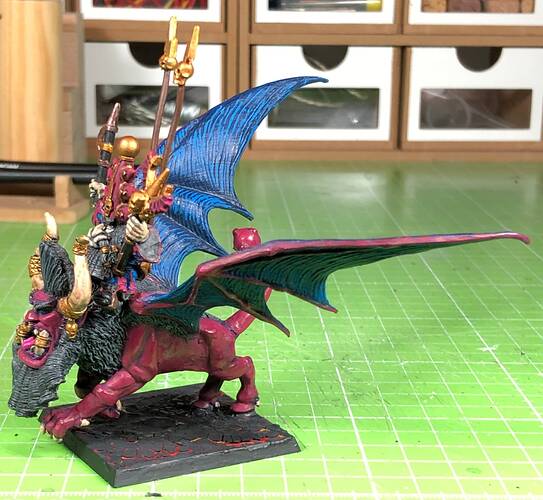 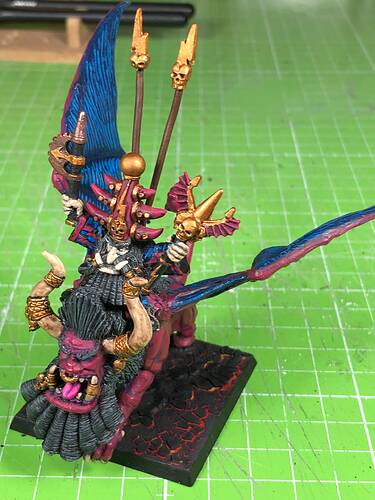 I went with the main red colour for the Lammasu and it’s a great fit. I started with a Liche Purple base coat, which set nice shading right from the start. Like with the Lords and Heroes, the Scab Red got a highlight layer of Scab Red and Warlock Purple for a nice finish. The wings got the same blue I used on the Sorcerer’s robe to tie them together (the coat is fashioned from the hide of Lammasu wings). I’m quite happy with the model, but especially the horns and hair on the Lammasu deserve more work. 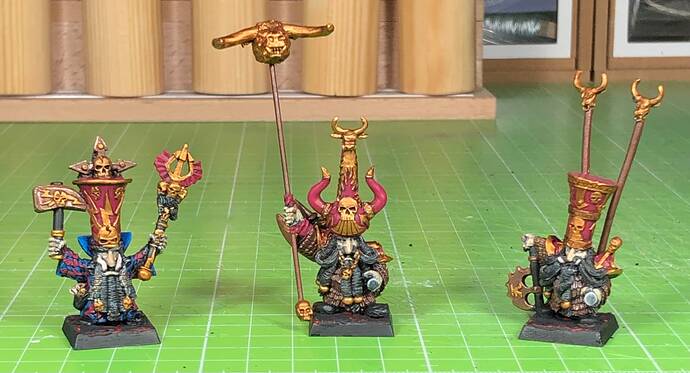 Chaos Dwarf Despot Battle Standard Bearer conversion. I cut off the axe at the hilt, fetched my trusty Dremel, took a deeeeeep breath and carefully drilled through the closed fist. Worked way better than I feared, tbh! The pole is a brass rod, bottom is a simple plastic skull and the banner top is, I think, a GW minotaur head. The cut-off axe got a handle and I fixed it on his back, cause I anyway do not have the back-mounted banners, win-win. Very happy witch the conversion, looks suitable BSBy. Just need an actual banner now 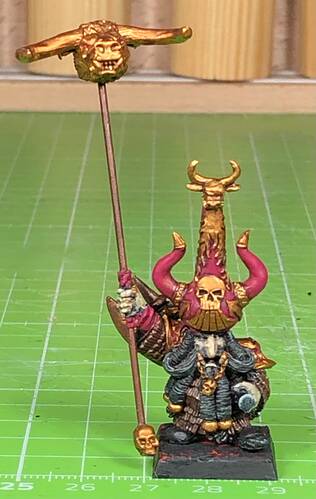 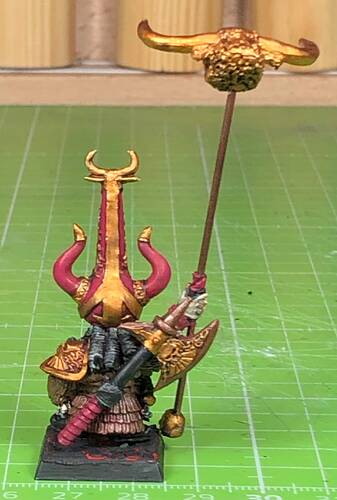 Chaos Dwarf Despot. One of the coolest models in the whole range. That’s also why he got the only back-mounted banner poles I had 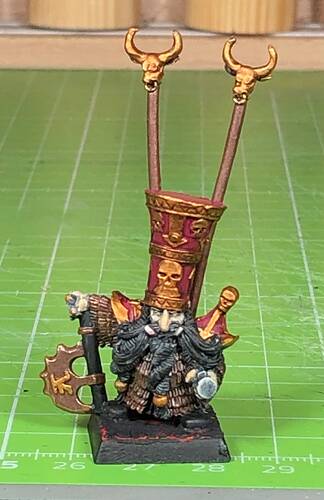 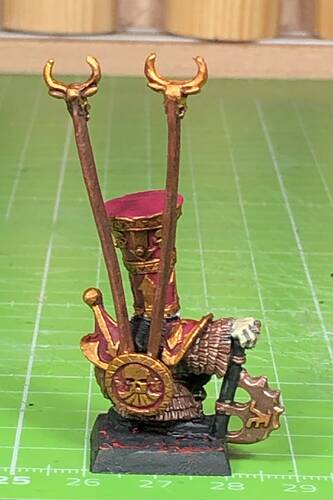 Chaos Dwarf Daemonsmith Sorcerer. Another iconic model from the range. I needed to introduce a new colour for the cloak, but I think that’s only just for a sorcerer model. Love this guy. 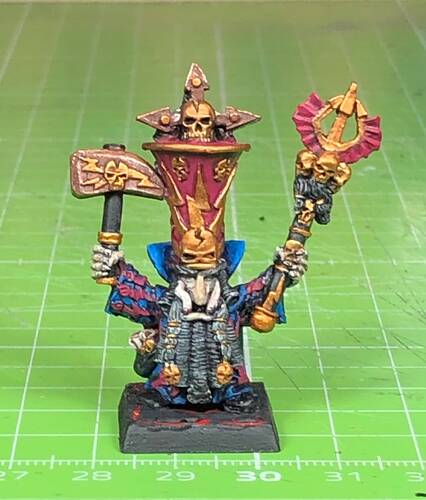 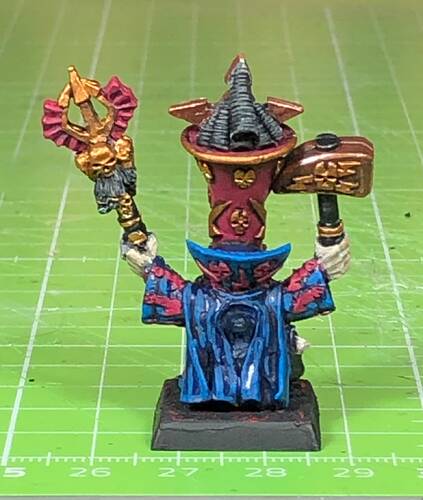 I saw someone use the 3D-printed hat pack to upgrade the plastic Chaos Dwarf Warriors and Michael was kind enough to print and send me some. Look how awesome they fit! Truly we live in the golden age of the hobby 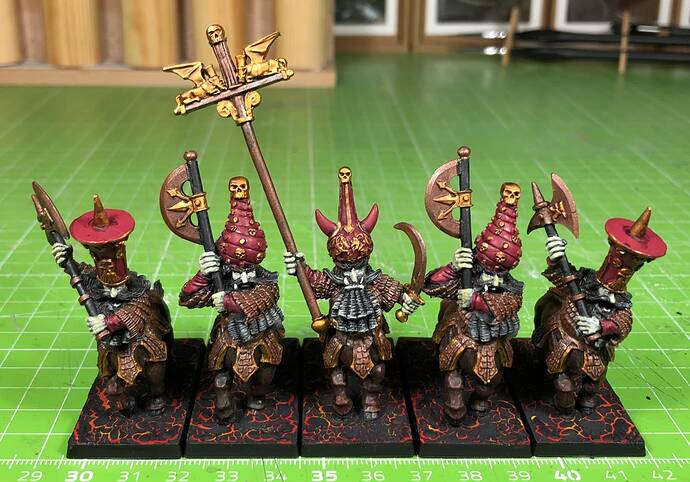 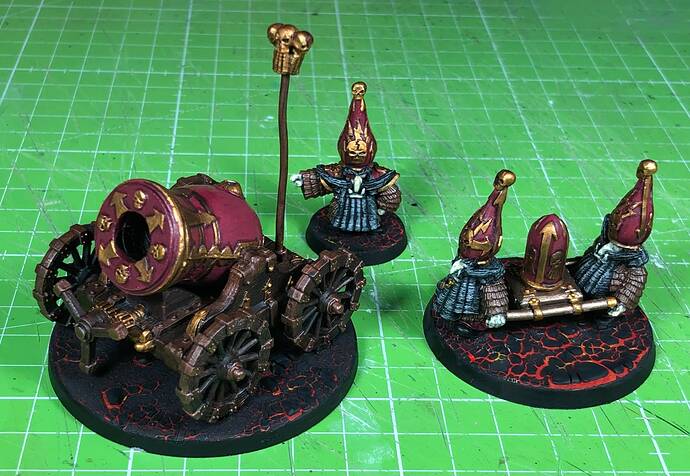 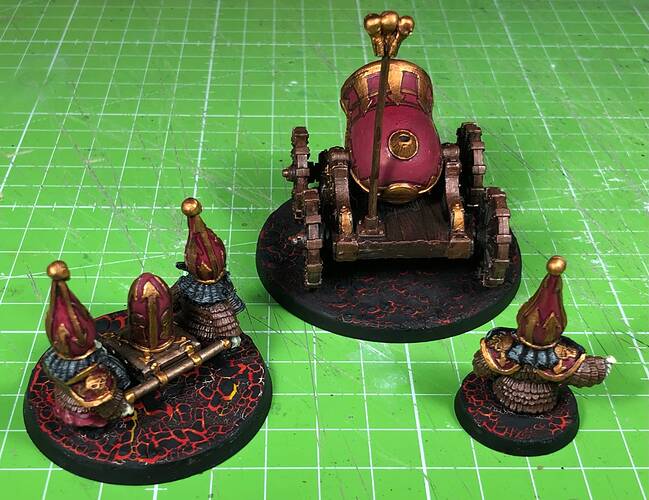 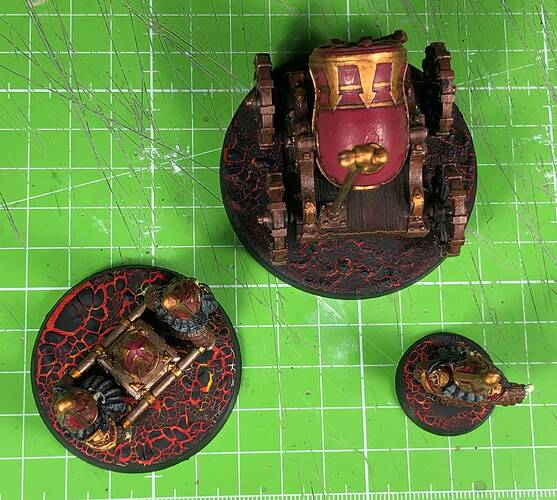 Needless to reiterate that I’m a staunch believer in square bases - gaming wise. But there’s no denying that models on round bases just look cooler, especially if they’re lone models. And since war machines don’t really need their crew on square bases, I always put them on round ones. Quite happy with these, especially the large one. Rapid lava effect came out good. 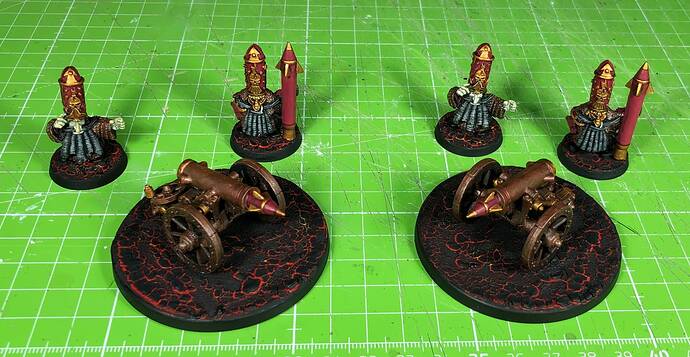 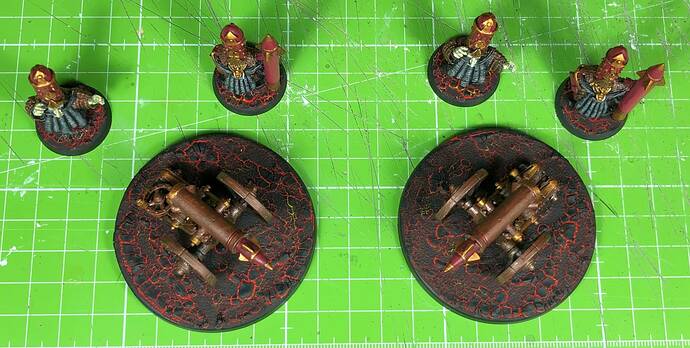 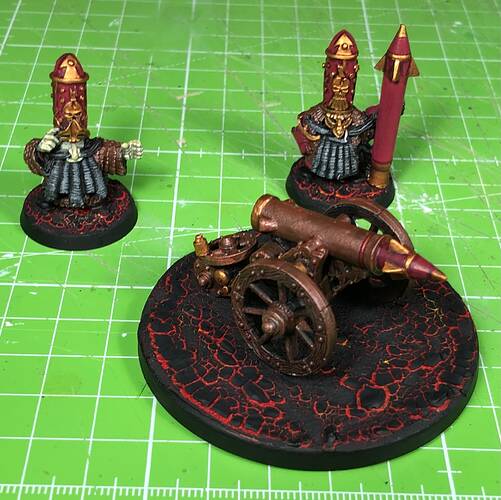 I remain committed to the plan of painting this army as fast as possible first - needs to take the battlefield in four weeks! And I do like the overall paint-scheme with a heavily limited palette. However, it doesn’t really work all that great for the Death Rocket launchers, way too much “had” to be painted copper, and the dark wood is quite close. Maybe I’ll try and fix it at a later point, but for now they are done.

Looking forward to seeing more of this

Honestly I had to check like ten times and pinch myself when I realized it had not been used yet. Was giddy for two weeks as I prepared for the post

And here we have an army shot of my Big Hats as they are now. My goal was to finish these in time for CDOffline 2022 and I made it. Last day additions were printed banners following @Malorndk’s Tutorial from the archive - as a side node, how awesome is our archive? This was a post from 2014 I didn’t even know existed! I also painted up some simple shields for the event but since then have replaced them with the fine @Fabelzel sculpts. 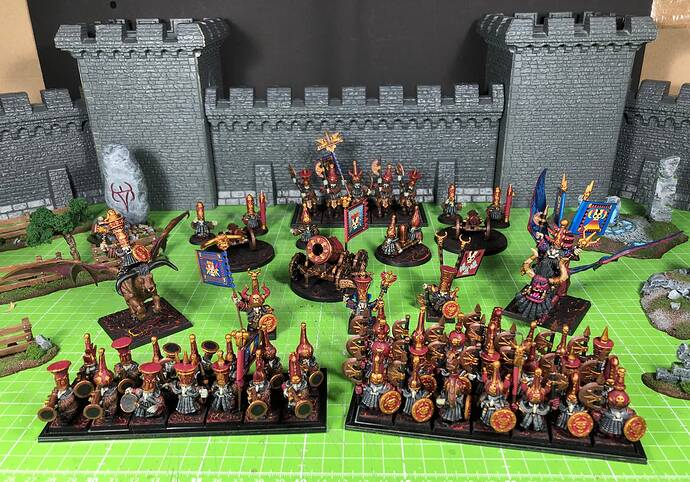 I am quite happy with the overall look of the army. The limited colour palette gives great coherency, and the army is a good example for how individual models painted to only a mediocre standard will still look quite good when assembled as an army (and looked at from a certain distance). This was the first time I played with a painted army in well over 20 years and it was instantly more fun to do.

Speaking of army, there is a legal army list of 1500 pts in this picture, would a Mod be kind enough to grant me that coveted badge?

1500 point army list?
No, because you forgot that using a round base is -250 points.
I joke!
I joke!
Seriously, it’s a beautiful army and I’m definitely jealous of it.
I’d love to see more of your stuff added to this army, so on behalf of Hashut, I hope you’ll add another 500 points.
Or how about another 1000?

Thanks mate!
Well the army desperately needs Hobgoblins (I’m sure you of all people would be first to agree

), both from a tactical point of view but also to allow me to field that second Deathshrieker and eventually the Lammasu. That would bring me to 2000 and eventually 2500 points or so.
At some point I’ll get my hands on those Hobgoblins but yeah, I think we’re all aware of how hard they are to find…

Well yes, no argument from me, in regards that all proper CD armies need Hobgoblins.

We are Hashuts chosen, after all.
Again, it’s a beautiful army