A journey into small scale Fantasy 15mm Kings of War

Since I’ve got the question about what is out there for 15mm Fantasy and how we adapted to play 15mm KoW. I’ve written a quick article about it meant as an introduction, please post any feedback or questions below.

First off there are several systems which are popular in 15mm, both for Skirmish and Rank ’n’ File. I will be focusing on Kings of War and Vanguard, both done by Mantic.

Kings of War handles your bigger battles with 50+ infantry while Vanguard deals with those minor skirmishes taking place before the main battle. Be it Scouting, Raiding and so on. They both tie in together for a more narrative approach to your wargaming, where Vanguard supports with an experience system, individual equipment and leveling up your characters etc.

Rules
The basic rules are free for both systems and can be found over at Mantic Games: Free Rules

While the free rules are great to get to know the game before you commit to it, you will eventually want to buy the books. To get the full core rules of the game you will need the Rulebook for KoW3 as well as Uncharted Empires for those extra army lists not covered in the Rulebook. Each year Mantic releases a Clash of Kings pack which cover minor updates to army lists to balance the meta as well as updated magic items, spells, legendary characters, formations etc. Each Clash of Kings collects all previous updates to the game, so you will only ever need the most up to date.

Armylist building
Easy Army is an online army builder which used to be free for KoW V1-2. It was developed as a third party tool. For KoW3 Mantic has been developing their own version together with Easy Army, which I strongly recommend because it includes all the rules for units as well as updates from CoK, FAQs etc and give you a printable pdf. 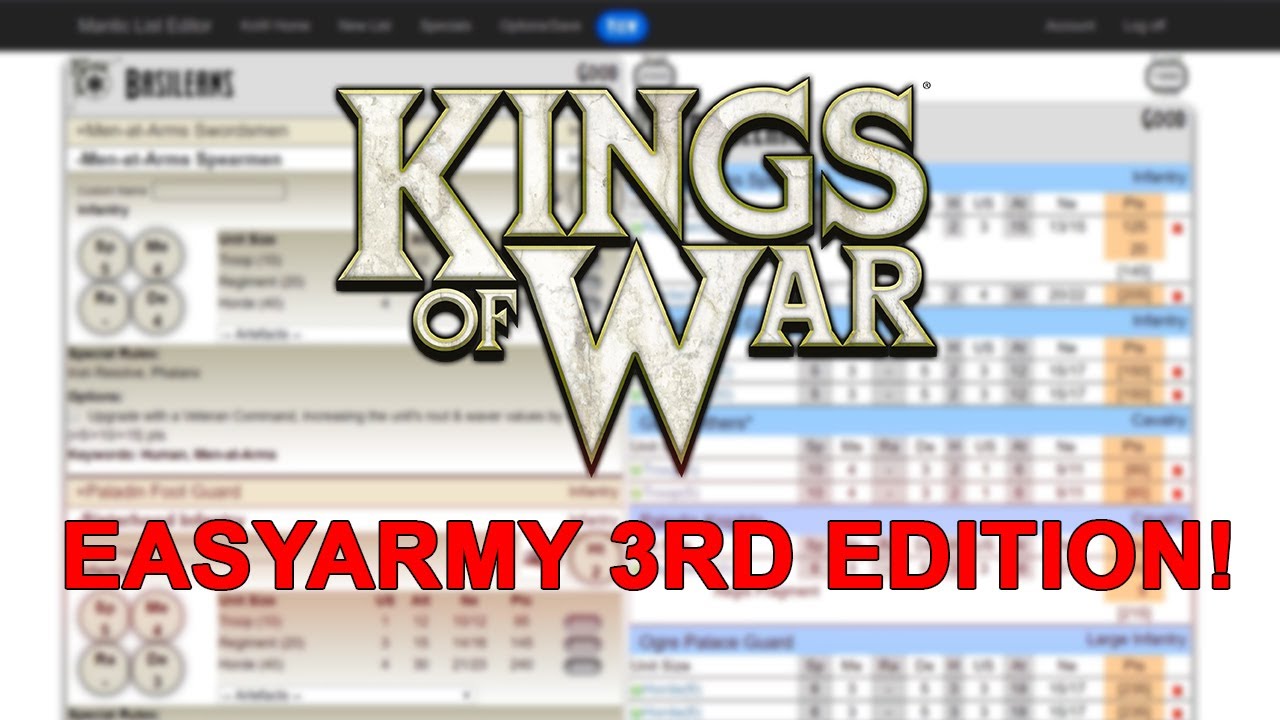 Basing
First of all I want to say that we don’t play competitive games in my circle of friends. KoW is a good game for such, and has a great tournament scene. But you will have to be a bit more careful when scaling down to get the exact translation. As long as your group agrees on a meta you should be just fine. In my gaming group we simply convert inch to cm, which is easy and works great.

For base measurements we half the standard KoW bases(p12), so for an example a Troop of Infantry in KoW is based on 100mmx40mm footprint and for 15mm we use 50mmx20mm footprint. With a few minor exceptions. The chart bellow is how we do it, but as long as you have a local meta agreed upon you are fine.

Regarding the chart bellow, “PMC” stands for Preferred Model Count.

For basing material we use Woodland Scenics Fine Turf which are available in several different colours. Here I recommend to coat with PVA and flock, once dry mix ¼ PVA and ¾ Water. Soak the flock and flock again. This gives a much richer basing and cover any edges from tabs on models etc.
Link to Basing Tutorial
Woodland Scenics

Nerve/damage markers
In KoW you track the amount of damage a unit has taken, and take a Nervtest to see if the unit breaks/flees.
To track the damage taken by a unit we use 5mm dice placed behind the units. Seen on some of the photos below. Simply add them up.
Dice and diceholders are available from Pendraken. I would recommend a two sets of 10 dice and one set each of the double and tripple frames.

Lore
The lore in Kings of War is a bit weaker compared to Warhammer, but it’s been deepening a lot in recent years with the 3rd Edition which is about 200pages of lore and given time it will be a good setting as well. There is nothing preventing you from setting your battles in the Old World or creating your own setting.

There are a few Novels available for KoW from Mantic or Winged Hussar Publishing, other than that the lore is sprinkled throughout the books mainly the 3rd Edition big Rule Book which is a hefty 400 pages!

Campaigns
There are several ways to run a campaign using Kings of War/Vanguard described in each core rule book.

Miniatures
Obviously I recommend the Tjublings as Abyssal Dwarfs.

For Obsidian Golems/Fire Elementals the “Adult Demonic Elementals” from PuppetsWar.eu are great!
For non evil dwarf related models I prefer the Demonworld range by RalPartha.

If you join the “15mm Fantasy Gaming” on Facebook there is a long list of 15mm ranges/reseller available.

Terrain
Usually we set up a table that we think looks good and then rolls to see what mission we will play. But for a more competitive game I recommend having a look at Epic Dwarf’s Map Packs.

There are several manufacturers of great terrain out there. But Dragonfrog Games is a favourite of mine for the Tjublings. I can recommend their sets a lot.

Here are some photos of our last battle, a small battle of Tjublings vs some of the last Free Dwarves. 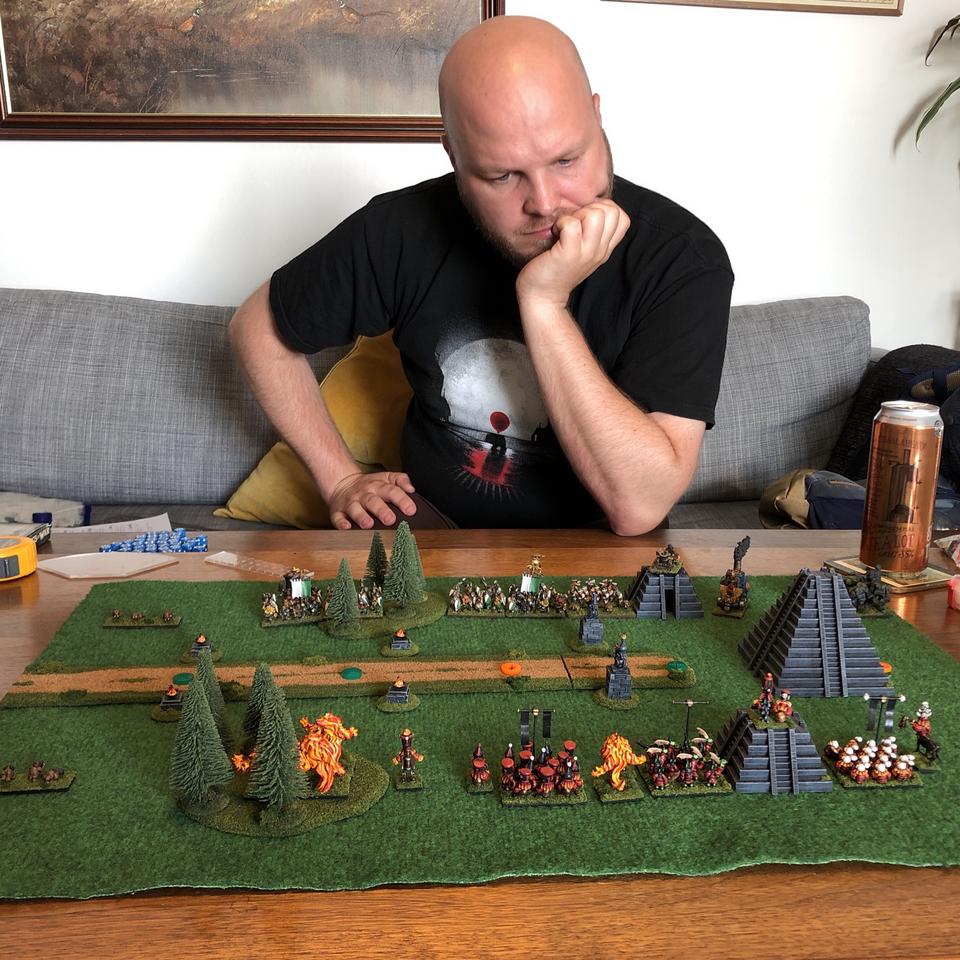 Vanguard is a skirmish Rule set from Mantic for night raids, scouting forces or minor clashes before the main battle using Kings of War. 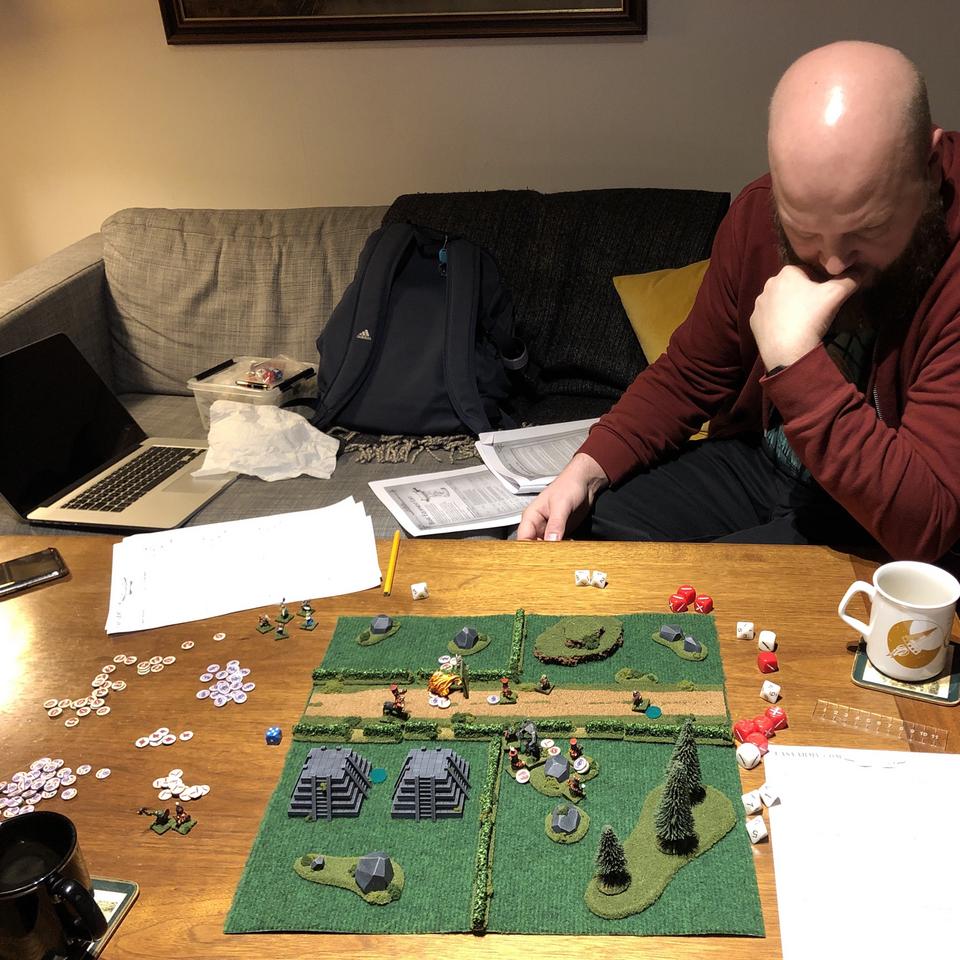 The main rulebook for Kings of War 3rd Edition
This it what you will want once you have tried out the free rules. It contains all the rules explained inc Items and Magic etc, tons of lore, maps and army lists for 14 factions.

Uncharted Empires for Kings of War 3rd Edition
The background section explores the new factions in-depth, detailing their place and influence on the world of Pannithor.
The army lists section introduces 12 new armies to the game: The Brotherhood orders, Free Dwarfs, Salamanders, Sylvan Kin, The Herd, Kingdoms of men, The League of Rhordia, Ratkin & Ratkin slaves, Twilight Kin and Varangur.

Note that the following books are released for earlier editions of the game, though they are still full of useful rules and ideas to incorporate into your games. Some mechanics work just fine over editions and some might need a little tweaking.

Clash of Kings 2019 for Kings of War 2nd Edition
Contains the rules and scenarios for Siege games. KoW balance updates, “new” units, Living Legends and Formations for all armies. New/updates spells and artifacts. As well as the introduction ofLegendary spells and new/updated competitive scenarios for 2019. 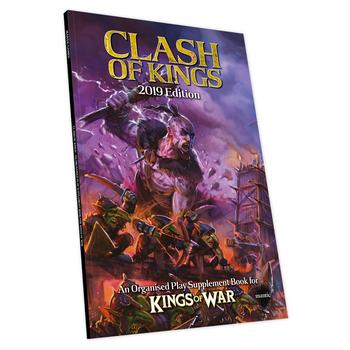 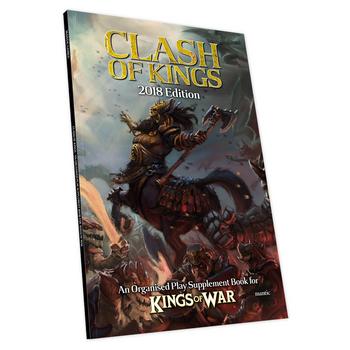 Clash of Kings 2017 for Kings of War 2nd Edition
This was the first CoK and focused a lot on how to organize a tournament and a league. There are some good ideas on how to grow your games, as well as a Experience system for your units and characters. Thoughts about terrain in a tournament. And ideas/guidelines for creating your own units in Kings of War.
And of course updates for the 2017 meta with, characters, units etc. 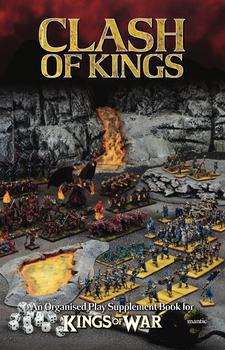 KoW Battlefield Cards Note that these cards work well with any edition.
These are fun and my group tends to use it alot for casual games. As longs as you agree on forehand you can use some of the rules/cards for normal CoK missions as well. “Objectives” these cards more or less lets you design your own missions by drawing cards and choosing a primary objective for the battle as well as a secondary objective reviled during the course of the battle. Also include “Battlefield Conditions” which can have none or a big impact on the battle, fog, rain etc. “Strategy” gives you small hand of cards which can be played for effects during the battle to tweak the course. 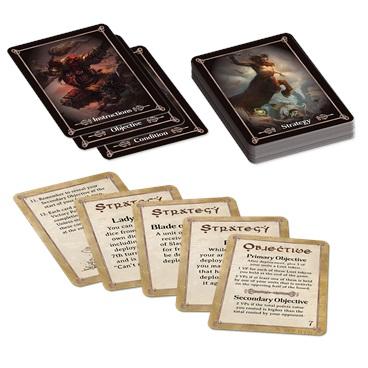 Edge of the Abyss for Kings of War 2nd Edition
Mantics first global campaign that run during summer/autumn of 2017. Mantic used the outcome of this campaign when they progressed their lore for the game. The campaign ended with overall “good” victories except in a few areas which brought the Nightstalkers to have bigger impact, flooding the Abyss, forced the free dwarves to flee unto the dwarven empire etc.
EofA Campaign brought formations, scenarios as well as Living legends for most armies. All of which are collected in the latest CoK. 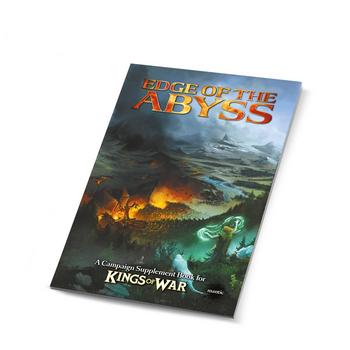 The Destiny of Kings - Kings of War Campaign Supplement for Kings of War 2nd Edition
Contains different ways/ideas how to structure and set up your own campaigns as well as “The Quest of the Necromancer Campaign”. Some senarios include Mantics Dungeon Saga, they could pretty easily be translated be played with Vanguard instead. 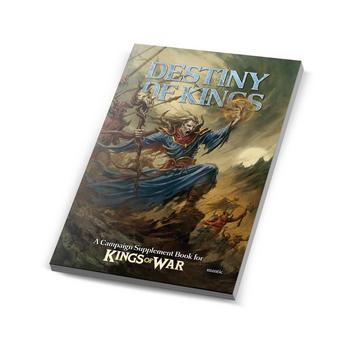 Kings of War - Historical for Kings of War 2nd Edition
This is not a historical war-game as much as a way to expand your setting and include Historical armies if you want to. For example the Romans have a generic roman feel to the army rather than correct fromations for all the specific time periods of the Roman Empire. That said, of you ever wanted to field Romans vs Goblins etc this is a fun book. Also contains some interesting rule concepts/ideas for your games like “skirmishers” and “up hill charges” and a few scenarios etc. There is also a list for “mythical” creatures to be used with the historical armies. 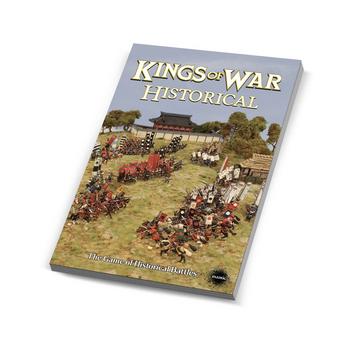 Hellfire and Stone for Kings of War 1st Edition
H&S is a narrative campaign featuring an epic conflict between Dwarfs and Abyssal Dwarfs. As well as six scenarios that link up the story of the campaign, Living Legends etc.
Thought this campaign is set for the first version of KoW its easily adopted for KoW3, since its a campaign I guess its mostly interesting for players who have a more narrative approach to the game and want to refight that conflict. 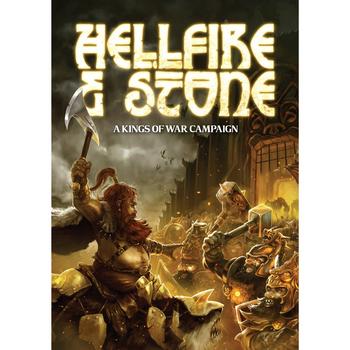 Vanguard
Even they the basic Vanguard rules are free, you will eventually want to get the full advanced rules.
These will let you play out the actions taking place before the main battles. Be it plundering an enemy camp, burning their stores, opening a portal, stealing information or assassination of an enemy commander etc.
This book includes all of the core rules for playing Vanguard, including unit entries, scenarios, campaign system, advanced spells and abilities, and rules for tying your games into Kings of War.
Be aware though that Vanguard is a “living game” with new units added every now and then. Rules for these new models/factions are available with the models OR FREE AT Easy Army Vanguard. 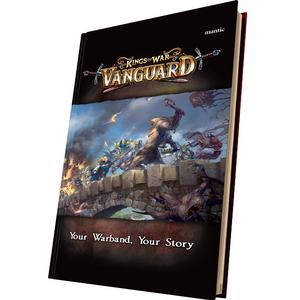