And the fully painted Ork half of the Titan Legions boxed set (my set was missing one Mega Gargant and a couple of appendages on the one I have; so technically almost complete Ork half; I will aquire and paint another at some point), plus 3 extra battlewagons. The really cool part is that the Imperial Titan half of the set is already painted. So this makes for a fully painted box set years in the making (- the missing model). Thank you BATG! 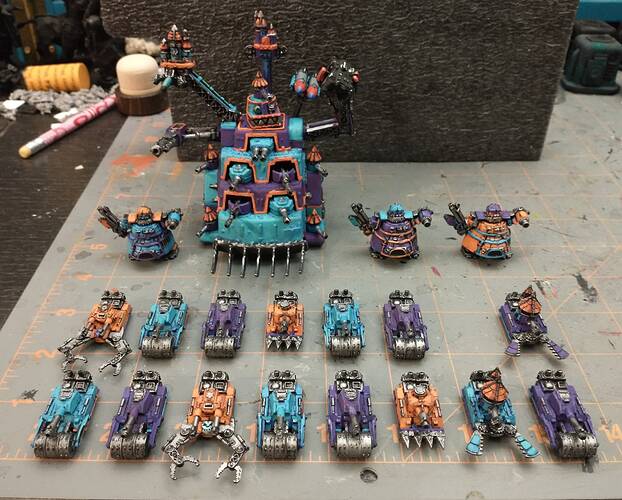 Sexy colors man! I love those. Id love to have that in my display case, regardless of if id use it!

Also, great going with the batg!

Bravo! Love them and well done

Got hammered by work the latter half of this month so minimal additional progress amounting to:

Pics to follow as soon as I have time to take them.

Also finished 16 CD Warriors, but they were base coated with some detail work started already. Took quite a bit more work to finish them than I anticipated, but not counting them in the total.

Have 8 more CDs and 12 more 50mm base monsters in progress, so will easily get down below that 0 threshold early April.

And those last four models painted in March: 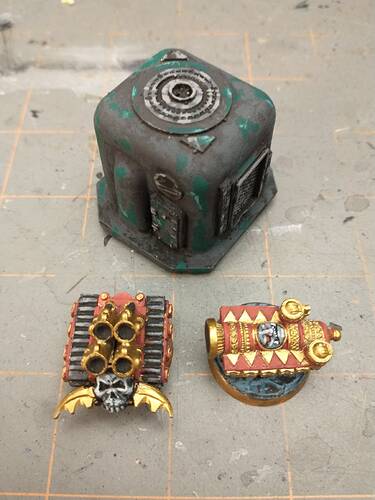 The Kerberos hound is in the middle at the back of the unit below. Also finished the 16 models in the unit. They already had some paint so not counted towards the BATG count but total tracked below: 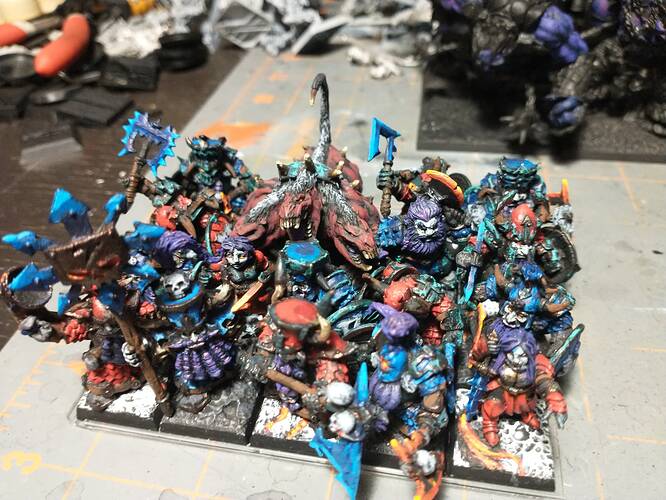 I have made progress on 7 models in my Berserker unit and 6 Obsidian Golems this week. Hope to finish at least one of these units by the weekend.

Very little progress on anything this month. Real life has taken front and center stage pushing most of my hobbies to the back seat for a bit. Hoping to get at least a small number of models done before month end. Making progress on one large scale model I have been working on as well.

Not jealous at all of those Ork Titan Legions

Some progress, finally at -1. Anticipate a major purchase shortly, but holding off for another couple of days; so unlikely I’ll stay negative very long. Painted 5 relatively simple Sedition Wars models which have been in my to do pile since the game came out. Not complex, but it’s stuff off my pile. -1 one BATG count for a bit. Have more of these on my desk, and several other models PIP. Perhaps may knock off a few more models tomorrow night before EOM. Pics to follow when I have time. Cheers,

Finally had a chance to take some shots of the Sed Wars models finished in April. These will likely end up as troops for some other Sci Fi game but are playable for Sed Wars. I know it looks a bit like I phoned it in for April, but the transparent camo models need something extra on the bases to give them visual interest. The bases took a fair amount of time compared to my normal quick dry brush bases, with 13-14 colors used in each and the under lighting effect. Happy with how they came out. Now to finish the unit and do some of the non-transparent camo troops… Hopefully more progress in May. 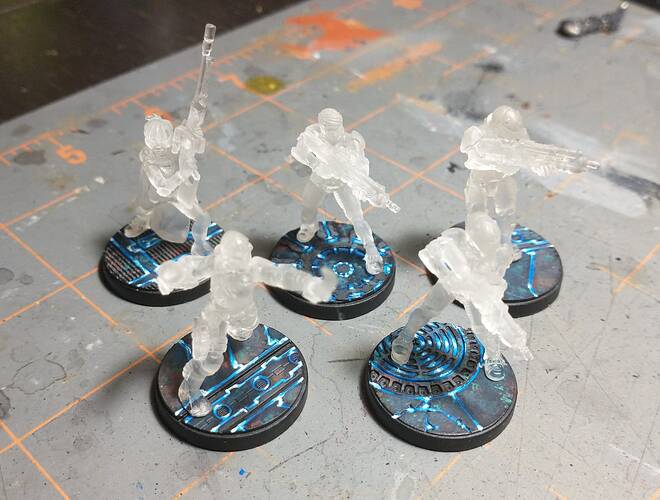 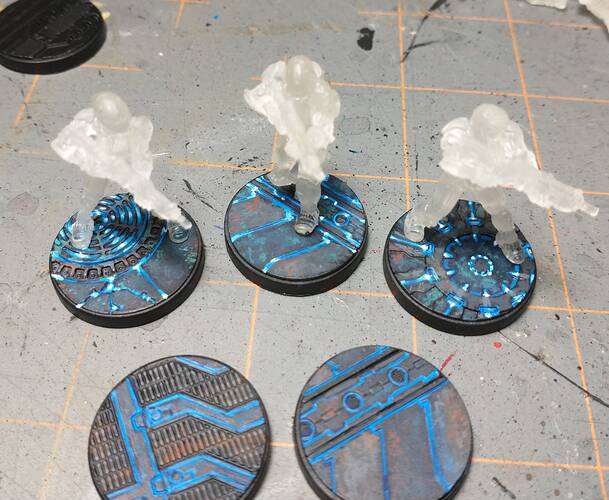 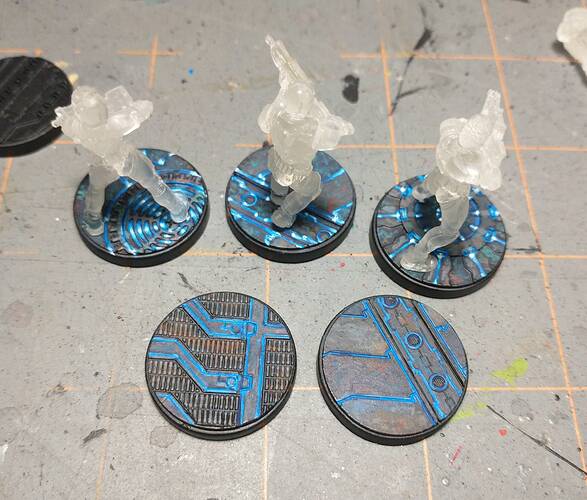 Been a month of acquisition with no completed painted models so far. All very targeted acquisitions but acquisition nonetheless.

Some Ork Gargants including the missing one from my Titan Legions box set. Once that is painted like the other (in the shot) the box set is fully painted and the price for these all together was less than half of what I would have paid to pick them up individually: 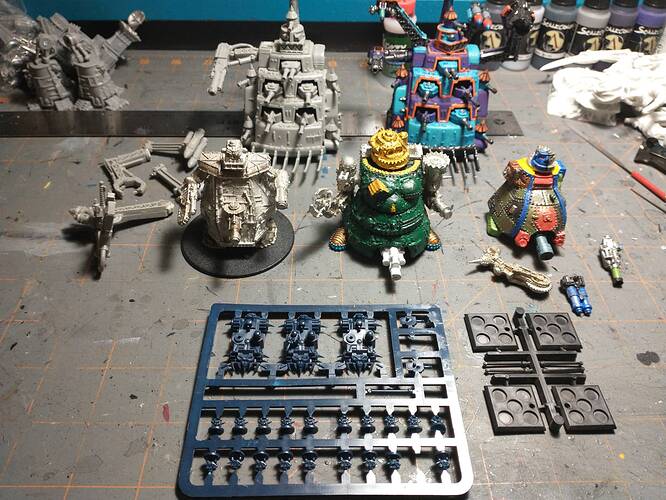 Next a lot of long OOP Ilyad Games 32mm models. These normally go for $20-$50 per model. Got the whole lot for the cost of a single model and only one single sword bit is missing. Beautiful sculpts. Really looking forward to getting paint on most of these guys. Even one in there that might make a K’daai: 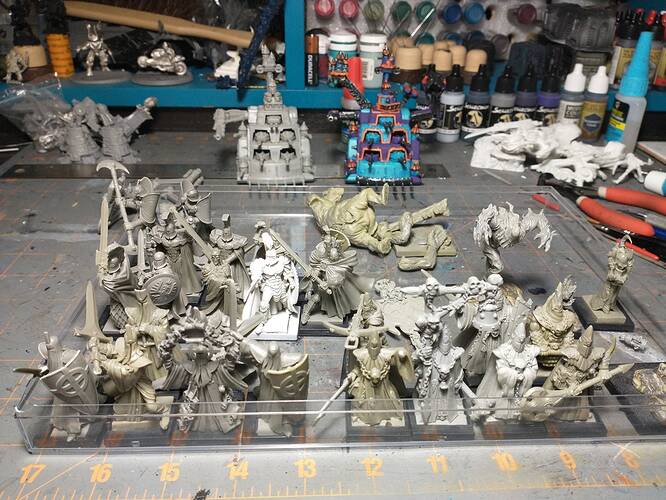 Time to sell some models to thin the herd, and lay some paint. Cheers!