Just over a month ago, on the 25th of august, I attended an 8th edition Warhammer tournament with a brand new army of Vampire Counts I had painted over the previous two months. Great times were had and the Warhammer bug’s teeth were firmly reattached in my soul. Then my friend Jimmy (of the Old World Lives podcast fame) told me about another tournament on the second of October. The extra exciting part about this second tournament was that it would be played with the 6th edition rules, which I always liked more than the 8th edition (controversial satement: 7th edition is best edition). Him and Martin, both of whom attended the 8th edition tournament, were already set on going. I started thinking about how I would change my list to fit the new (old?) parameters.

As this was happening, my cousin got his brand new 3d printer he had bought on impulse delivered. I helped him bring it home and he got to work setting it up. To test it, we needed models. What about Fabelzel, I thought. I have followed him since March on Patreon, planning to eventually do something with his sculpts. With the files available, my cousin printed a couple of test dwarfs. The initial results were of mixed quality, but all the rough bits ended up on the backs of the models while the fronts looked good. And then the idea formed: print and paint a whole army of Chaos Dwarfs in a month, then take it to the tournament. The tournament didn’t require you to send in your list in advance and I recently painted an old school Orcs & Goblins army so I knew I had some extra special units ready if I needed them. So i decided to proceed with the project.

I started by painting up the test models to figure out a colour scheme. Black, red, iron and bronze were the obvious choices for me, but in what combination? I quickly learned that I couldn’t save time by just doing the hats in a single colour. The designs on there demanded and deserved to be seen properly. So be it. Painting would take longer, but it would be worth it. I marshalled all my friends with 3d-printers and got to work. Kalle, Gabriel and Martin got to work slicing the STL’s and filling their tubs with resin.

I keep all my Warhammer things in a rented space called the Nerd Basement, which while great means I can’t get there every day to paint. So the heat was on. Any day I could find a hour or two to go there and paint, I did. Slowly the army grew. A few times I ran out of models before more could be printed. Those days I felt the approaching deadline the most. But I kept making progress.

I learned how to modify files in Meshmixer to increase the variety in the units. With Chaos Dwarfs this is super easy as a simple hat swap is all it takes. The regular troopers in the unit with great weapons is made up of just two different base models, but thanks to the hat swapping you’d never know unless you looked very closely.

The most serious bit of cut-and-paste 3d modelling was done to the level 2 sorcerer and the bullcentaur standard bearer. While the sorcerer came out ok, the bullcentaur ended up with a massive girder-like support piercing his flank and covering his whole back. I snipped it off and scraped it as best as I could, but his back was a mess. As I was rushing, I decided he would have to do anyway. The front looked good at least. Then Jimmy came by and saw the model and offered to re-sculpt the ruined parts on his back. I accepted, knowing that he is quite skilled with putty. He came back a few days later with the model and after painting you can hardly notice there was ever anything wrong with it.

I had seen Fabelzel’s previews of his goblin assassins and contacted him to see when they would be available. He replied that they should be out by the 25th of September. That would give me one week to paint them. Easy, I thought, and added them to my list.

In the end, I was rushing to finish. My darling wife offered to help, and while she is certainly artisticly talented herself, it is more with traditional canvas painting. Teaching her my method would probably eat up any time that could potentially be saved. If I had twice as much time left, it might’ve been a good idea, but not this close to the end. She told me if I could think of anything she could do, she would do it. And I did think of something. Many models still nedded bases. Basing has always been my least favourite part of the hobby. I explained that to do the bases would be a boring, monotonous task, but she still wanted to help. So a good third of the army was based by her on the evening before the tournament as I was desperately trying to finish painting. I gave her a ride home at midnight, then went back to finish the last models, two crewmen for the earthshaker cannon and a slightly misprinted blunderbus-wielding dwarf. I had apparently miscounted and found I was lacking one, and with no time to print a slightly malformed gunbarrel was going to have to be good enough.

In the end, I finished painting at 03:50 am. We were going to meet up at 05:45 am to leave for the tournament. I quickly set up the army on our gaming board to photograph (and to make sure I wasn’t missing any more models), then packed it up in my carrying cases, and went home for a shower and breakfast. I had just enough time for a 20 minute lie-down before Martin arrived and we were off.

The tournament was great, and while I do enjoy 8th edition, this proved that 6th edition is the better of the two.

A special thanks to Kalle, Gabriel and Martin for printing, to Jimmy for sculpting, and my wife Sera for basing (and putting up with me spending every available moment painting models this past month). 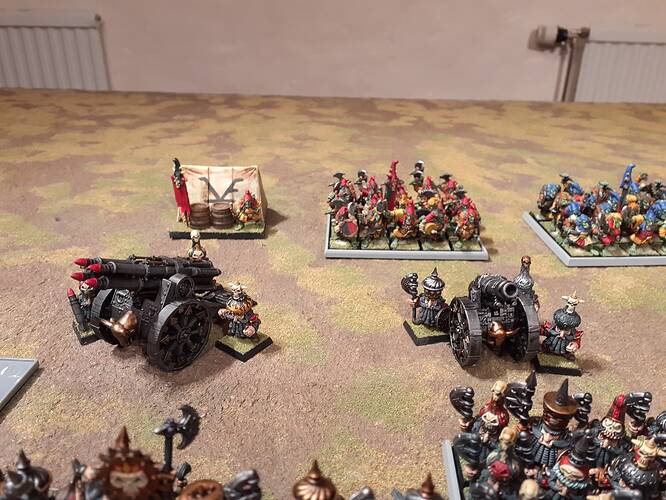 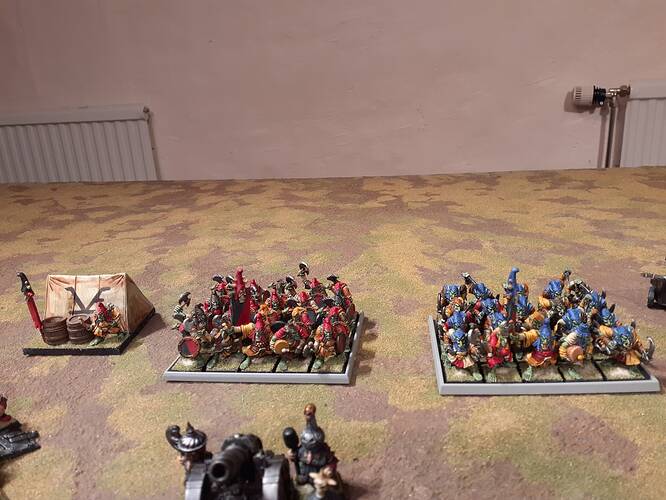 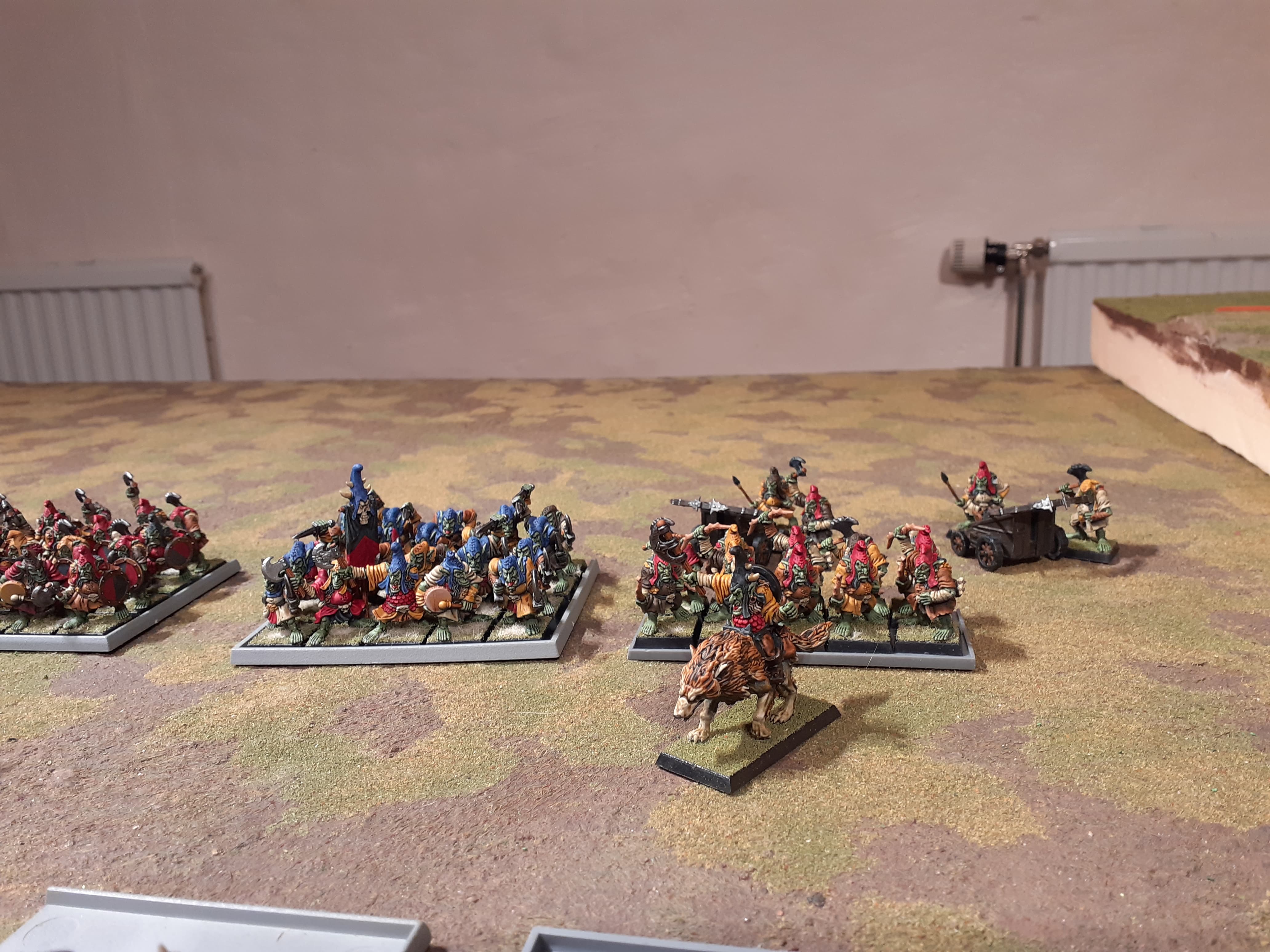 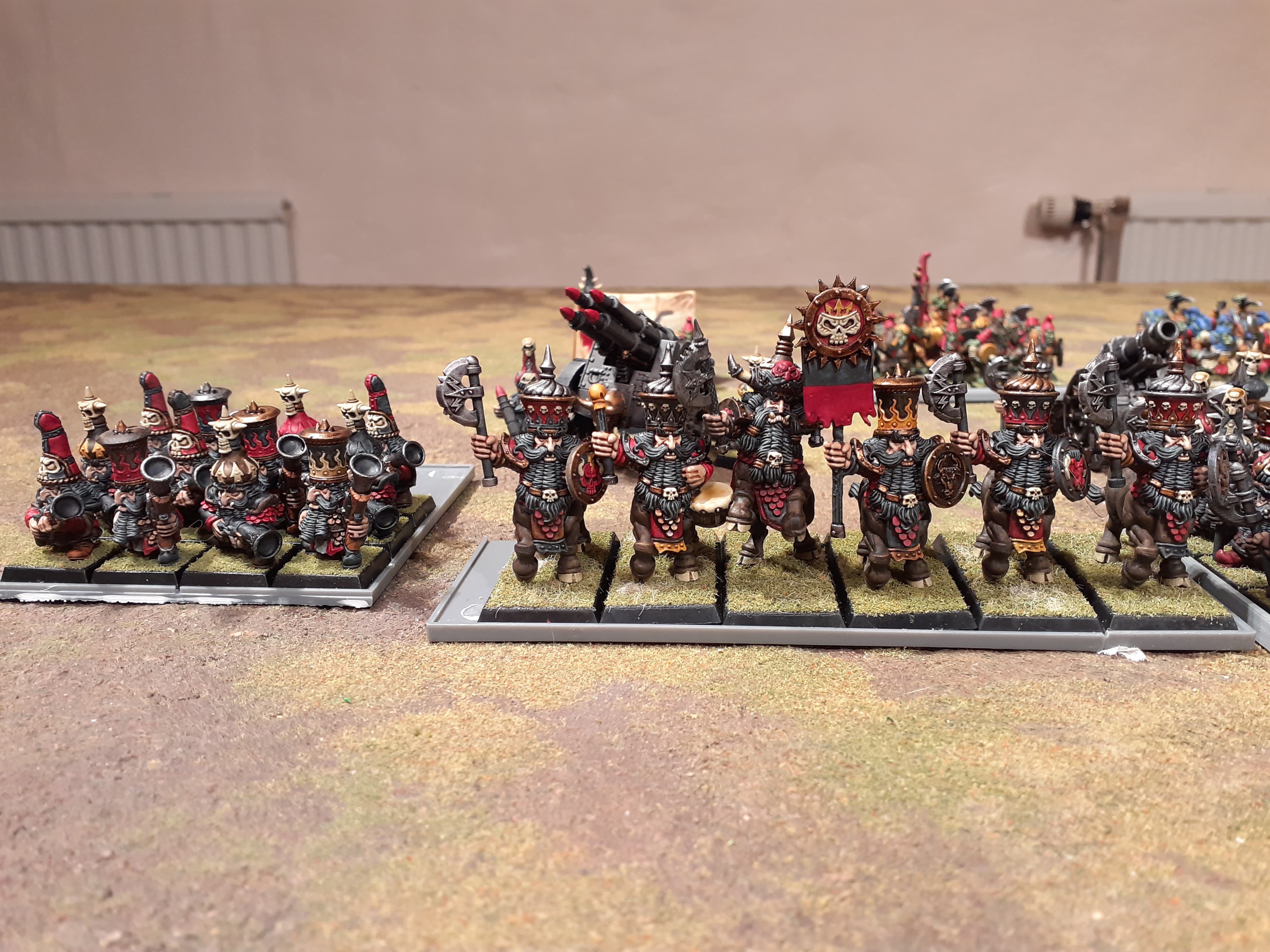 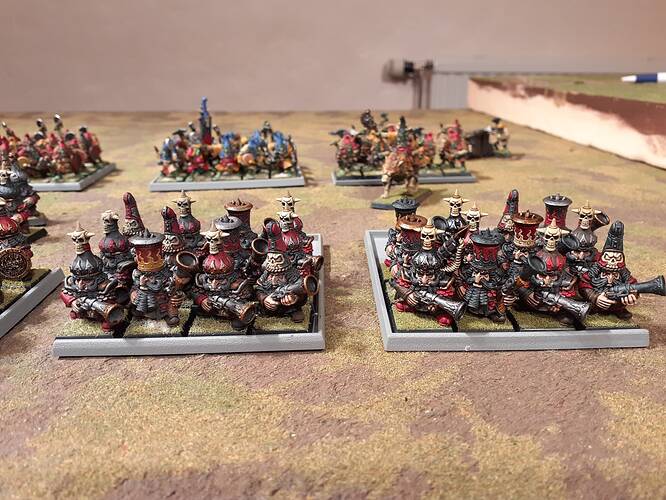 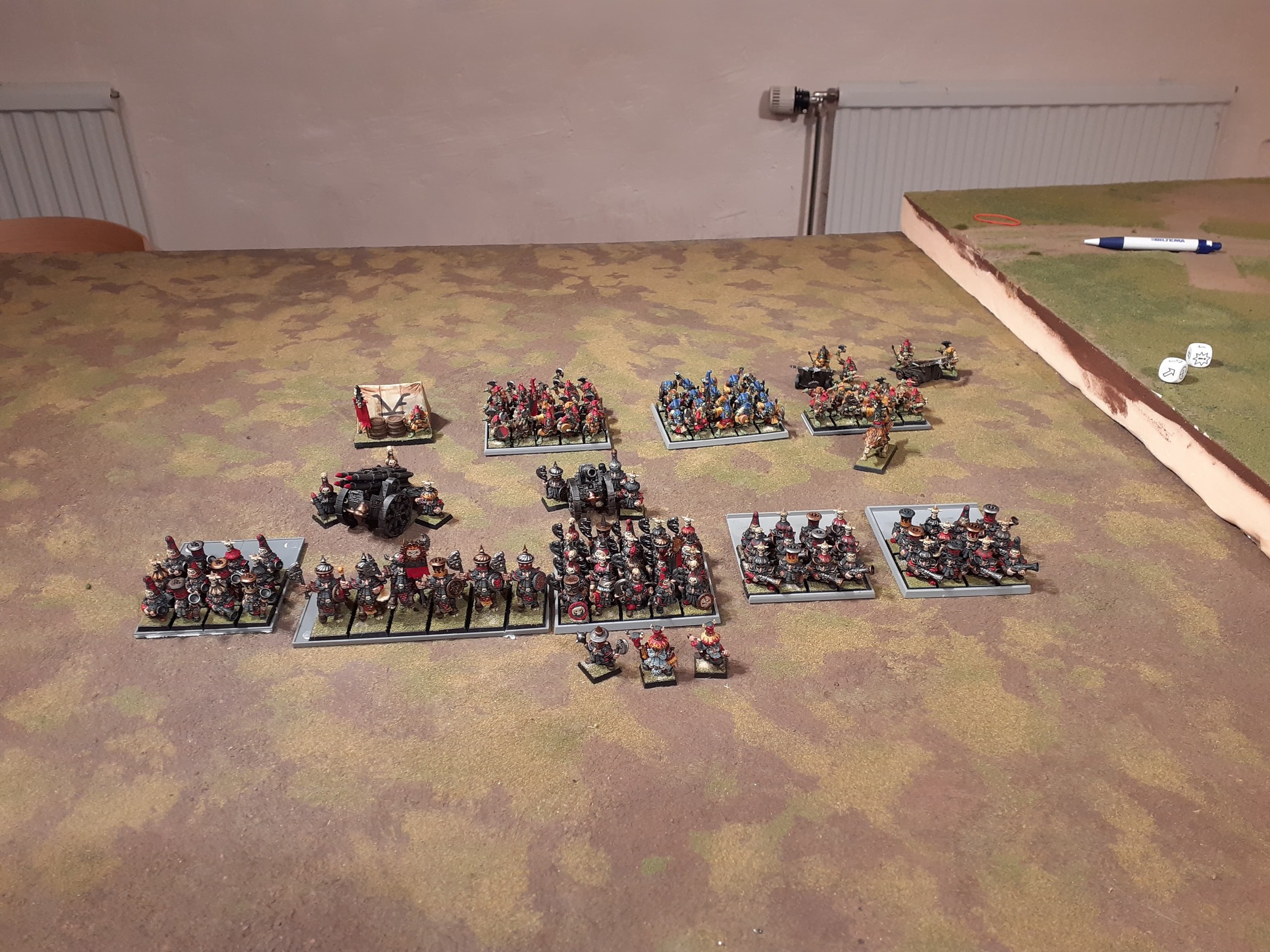 3D printed armies are the best! I love yours. Only looked at the pics, due to being too tired for the text. I’ll read it tomorrow!

Oh man, finally you came here and posted your army! So great to see you joining our ranks!!
Welcome, and thanks for the greatness!

We need @Fabelzel to finish of the range with the last options!

We have been admiring these on Facebook and discord!

Where can I find Chaos Dwarfs on Discord?

I belive its over here…

I just created a Discord chat for CDO! Website News

Discord is becoming super popular for online communities and I’ve been using it a while for various interests. I thought it was high time we tried it out for CDO! https://discord.gg/mNCj6XtSxf See you there! Oh, and I updated www.chaos-dwarfs.com with links to the Discord, Facebook and the new Discourse forum.

Amazing stuff, swooning over this in multiple media’s now

Love you army mate and welcome aboard!

Hashut couldn’t be more pleased for sure! Glorious work over there mate! 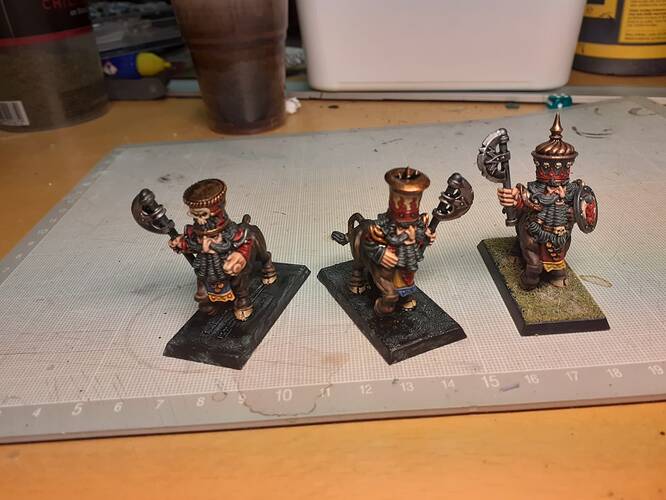 Your army is amazing! Keep collecting and painting!

Impressive work at that pace! 3d printing sure seems like the future!

that tent looks awesome… aswell as the rest of the army!