Following on from my beginners guide to painting a single Necromunda ganger ( Painting a model in minutes: A beginner’s guide) where I tried to show how to get a tabletop soldier in as few simple steps as possible, today I’ll be doing something similar with 40k scenery.

A mate of mine runs a hobby store and needed to get a couple of tables worth of scenery ready for a event next weekend. He had 4 boxes of the new “Nachmund” kit. It’s standard sci fi stuff. Buildings, radar dishes, random machine looking bits. Nice solid terrain. However 4 boxes was too much to do on his own so he asked me if I’d take two boxes and give it a go.

This was achieved by using simple, easy to repeat steps and by using techniques that take less effort but yield good results.

Let’s go through how I did this.

The idea is that detail that sticks out catches paint and recesses remain black. It gives a quick and easy effect of lighting that would normally take a longer time dry brushing or layering.

Here is the picture above after zenithal. 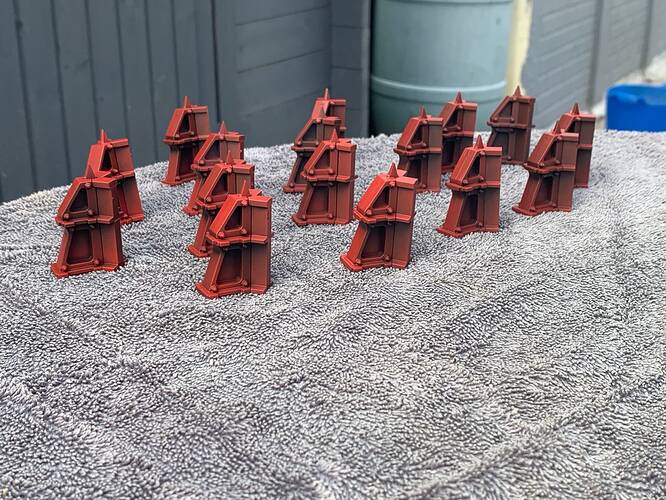 I then proceeded to zenithal everything else. Some larger terrain pieces had their walls zenithal sprayed different colours to their roofs. This can be done before glueing them together for ease and to prevent one colour contaminating another (I did this on the largest platform but on the smaller hab blocks I lived dangerously,) 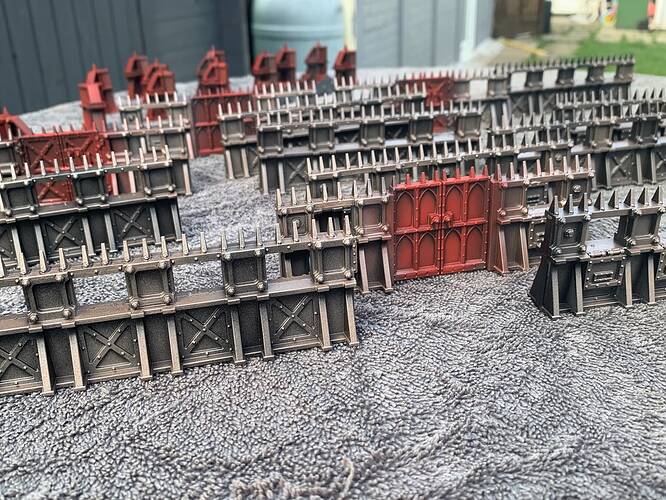 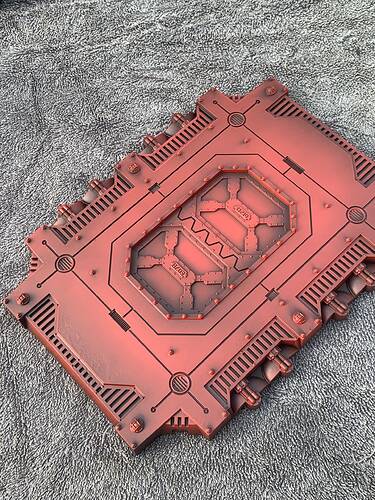 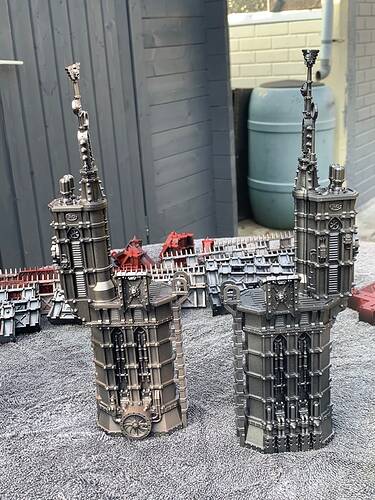 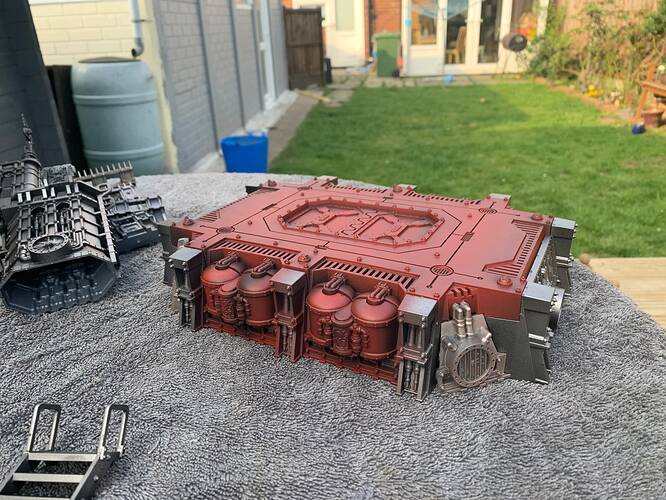 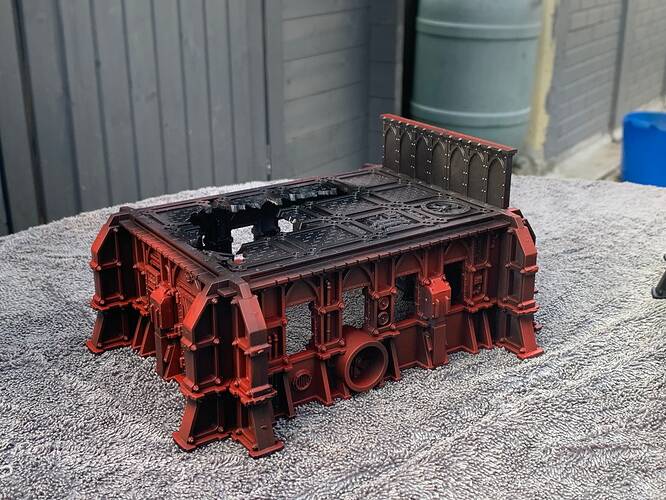 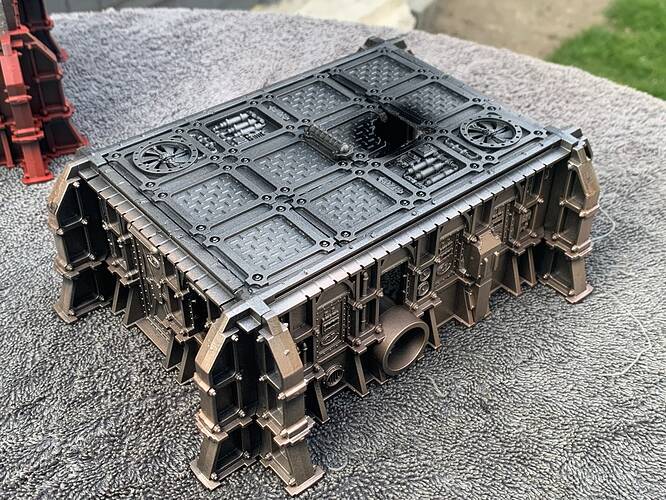 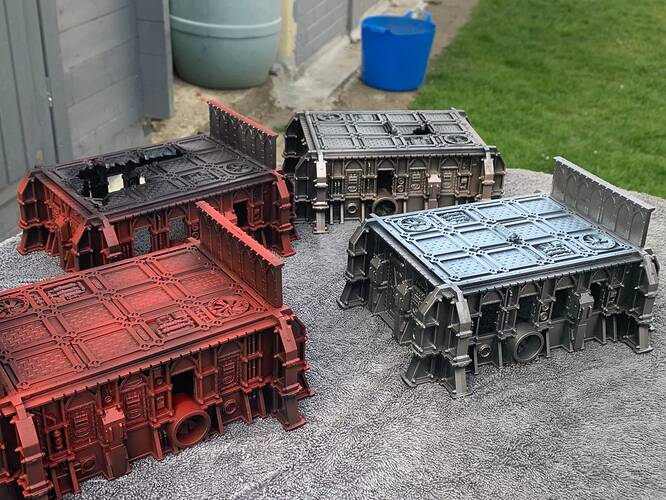 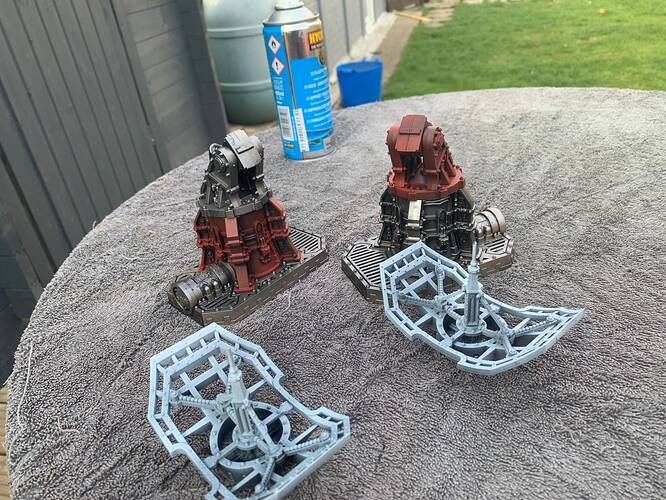 3.5) an optional extra. See the buildings with a blown out roof? They were hit with black spray again in order to simulate damage and burning from an explosion. 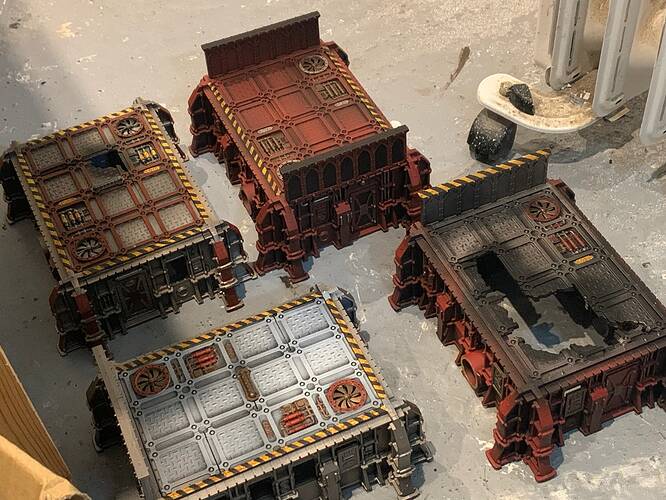 Hazard stripes are not an optional step. The 41st millennium is hazardous. You need hazard stripes.

Now honestly - you could call this done at this stage. You have shaded walls and details. You’re ready to play. But the next step is quick, easy and makes the whole thing feel less Technicolor and more “lived in”

Now anyone who has painted minis or followed my beginners guide to painting a model, knows that aggrax is liquid gold. It is however expensive when being used to shade a model as big as a building. Guys like @Reaver can make their own washes and save some imperial credits that way, but for what we are doing today a simple paint and water mixwill do the job.

So we will use a cheap black paint and lots of water. We mix them until we have a runny water like consistency. We then Cover every single model. I then use a paper towel afterwards and clean wash off of anything that I wish to remain bright (mostly the detail that sticks the furthest from the building such as large struts.

After this the models look old and grimy.

Next we mix bright orange paint with water into a very watery consistency. We then dab this whenever we want rust. We aren’t careful and we let it splash and run wherever it wants.

Question: Why do we not use watery paint instead of expensive washes all the time then?

After this step is dry, the models are finished! 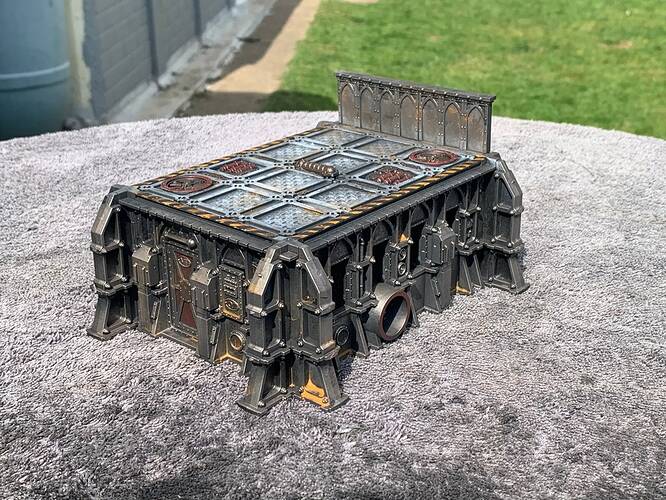 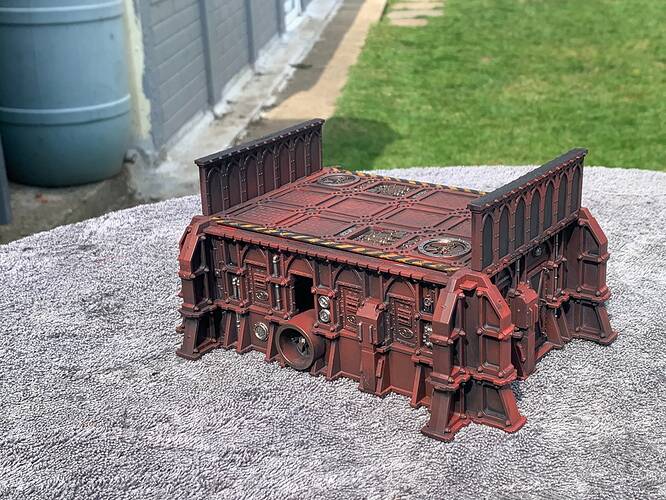 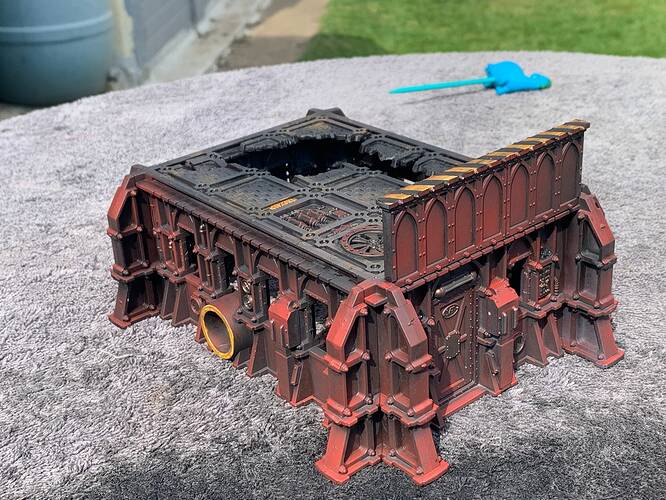 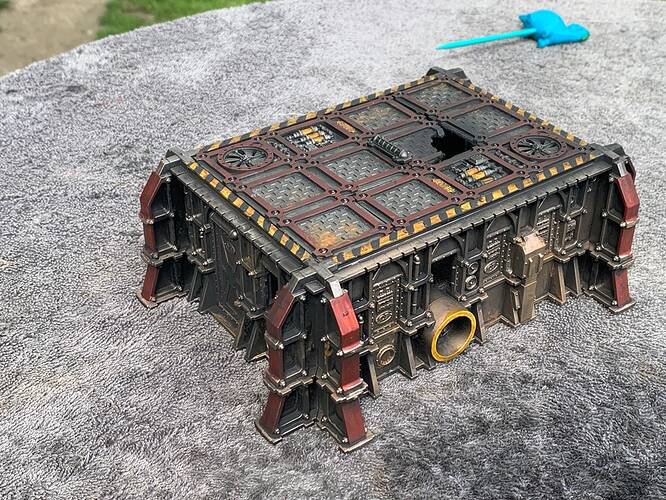 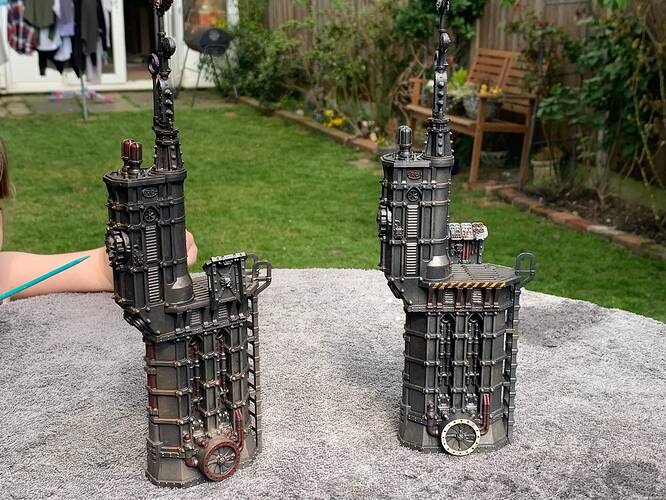 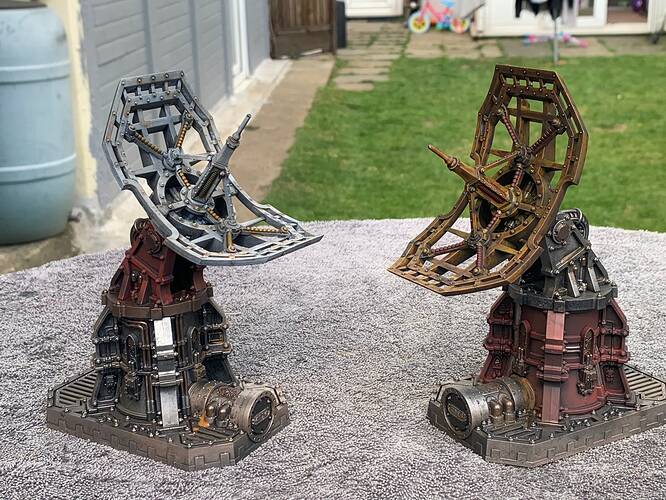 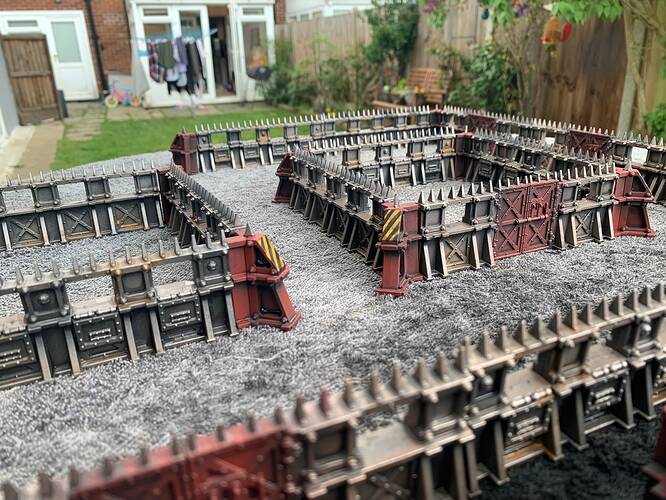 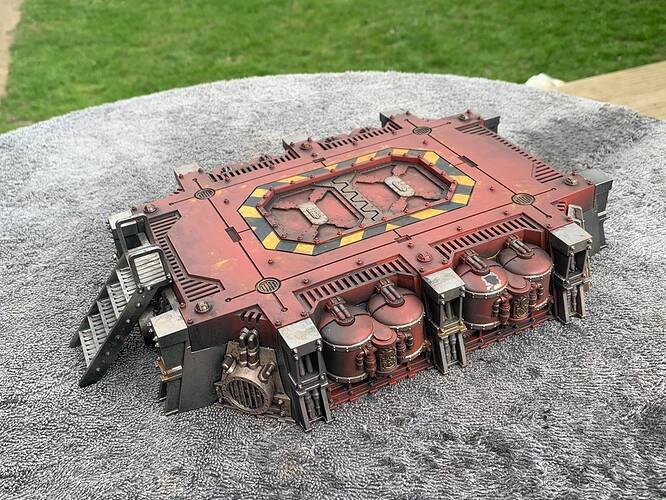 And there we have it. A tables worth of scenery painted in in 24 hours (much of which was spent sleeping!)

Any questions about these techniques , just ask. A lot of it is considered very basic beginner techniques but if nobody ever shows us, how do we know them right? These buildings are totally tabletop standard. They are not masterpieces.

But at the end of the day the scenery is there to make your army look good, not the other way around.

Here’s the set now on display at my mates shop: 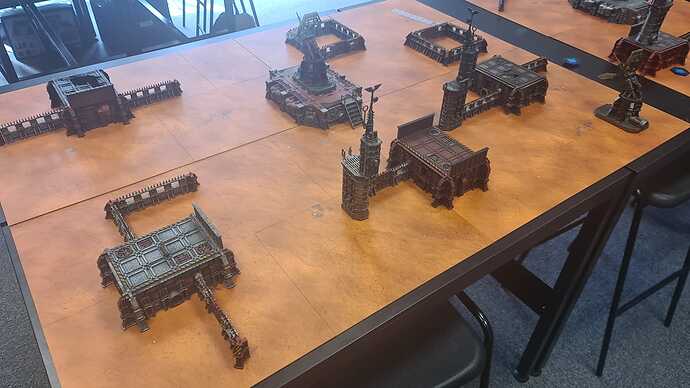 100% agree on the hazard stripes!
Looks great. I never paint or build scenery because the time could be put to painting miniatures instead but if its this quick…

I am not that quick, i slug beer between brush washes

could easily fool people and say this was airbrushed.

Did you freehand the hazard stripes or use masking tape?

I still owe you a zine article. It’s easy breezy beautiful covergirl (erhm coverterrain?). There’s an even cheaper solution for terrain than flow improver and matte medium though. I think it’s called rinse aid? or Jet dry? I haven’t been bold enough to try as results are glossier. for metal stuff though could be a non issue. 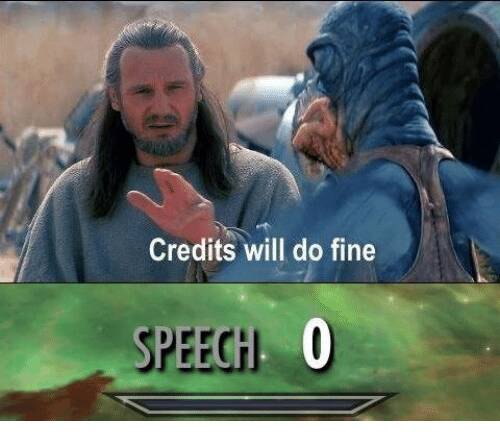 Painting looks great! But to be honest Im more impressed that you can find the time for hobby with a kid! Guess Im still a bit shell shocked over here…

The secret @tjub is to be an absent father and an inattentive husband. 90% of the time it works every time.

Real talk - we were self isolating with corona for a couple of days and the child “helped” with some of stages like the washes / collecting sprue and putting it in the bin!

The secret @tjub is to be an absent father and an inattentive husband. 90% of the time it works every time.

My child arrived just the other day
He came to the world in the usual way
But there’s terrain to build, and Dwarfs to paint
He learned to walk while I was away
And he was talking 'fore I knew it, and as he grew
He’d say “I’m gonna be like you, dad”
“You know I’m gonna be like you”

And the cat’s in the cradle and the silver spoon
Little boy blue and the man in the moon
“When you coming home, dad?” “I don’t know when”
But we’ll get together then
You know we’ll have a good time then