I 'm really digging the flowers on the base (tutorial?)

I wish I could say I did these myself. Alas they are Green Stuff World flower tufts. There are also lots of etsy sellers that do these. Various colors and lengths of grass available.

A DIY solution would likely need a static grass applicator of sorts (I tried without and results were meh). Make a bunch of glue dots on a parchment paper and go to town with a grass applicator to get them to stand up nicely (then you still have to sort out creating and adhering the foamy flower shreds). If I were doing lots of these I would DIY, but couldn’t justify the time or money to get properly geared up. Also I don’t really need these in any sort of abundance so took the quick road.

Got it. Will check those out. Thank you, Sir!

Hobby hangouts are easily the most productive painting hours. Shout to all the folks that join on the discord. It’s great fun waging the war against the grey with fellow worshippers of Hashut.

Made my way through all of the mobs for the Mergo’s Loft campaign expansion. Up next the Wet Nurse of the infant great one.

These attendants wander the spider infested halls and libraries that make up the Nightmare’s stronghold. Ascending the tower is accompanied by a descent into madness. 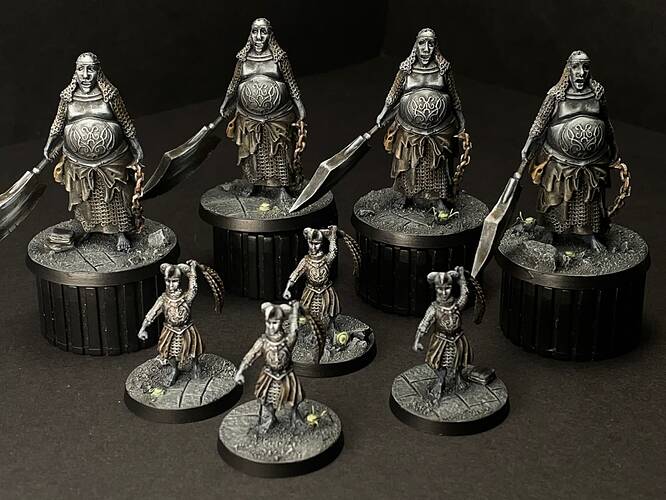 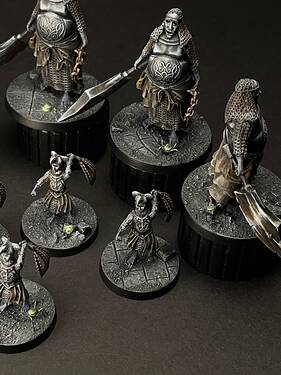 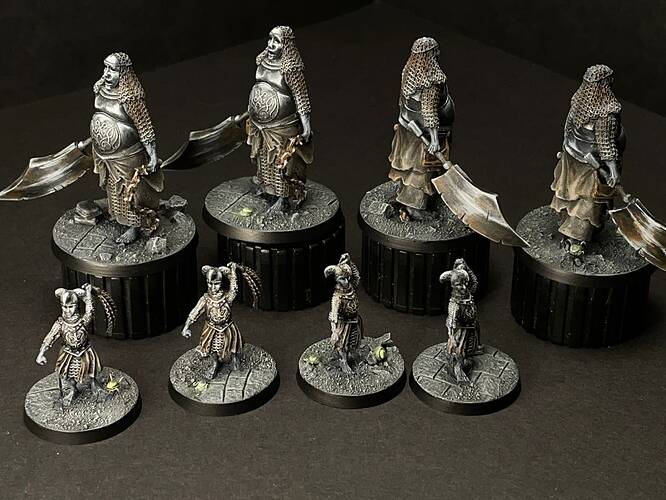 Can’t believe I fell behind with this blog, I’ve only just seen this flaming hound monstrosity! These are some of the most convincing fire effects I’ve seen and I’m now wondering how I would get hold of one of those things to play with…

It comes in the Chalice Dungeon Box to be specific. I really enjoyed painting that model, one of my favorites in the whole 200+ minis. It certainly has chorfitude written all over it, does make me wonder what a head swap would look like!

After witnessing the death throes of Mergo’s Wet Nurse, the echoing lullaby fades throughout the lunarium… a haunting few breaths later the cries of the infant great one cease… and the Nightmare ends.

One more boss defeated from the grey horde. Accompanied by easily the quickest start to finish effort on another full box of Bloodborne.

Mergo’s Loft can now be played with fully painted minis. 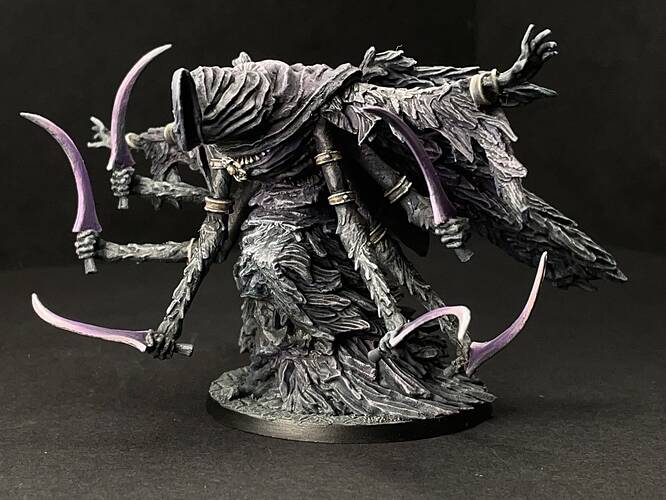 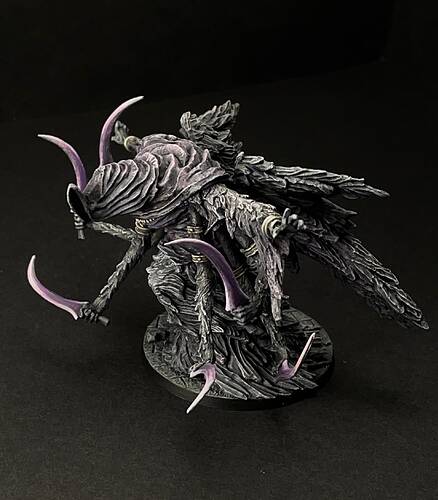 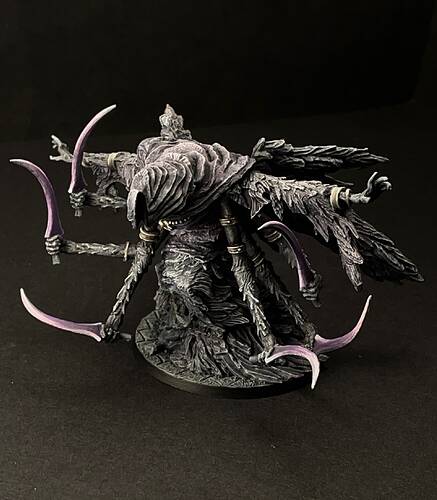 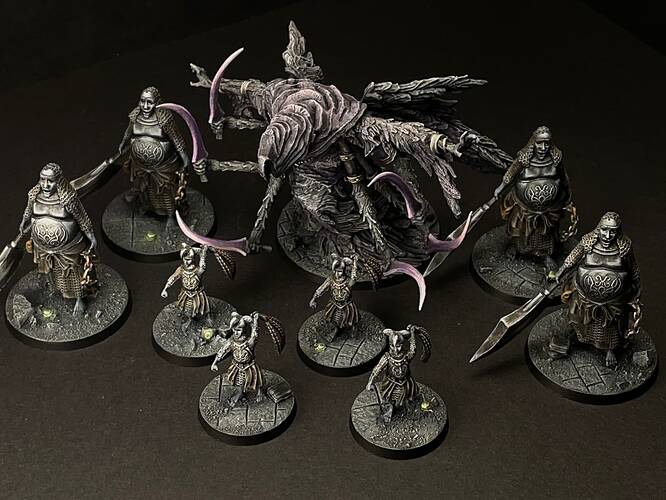 Some much needed progress on the main game, which will be embarrassingly one of the last to be complete. 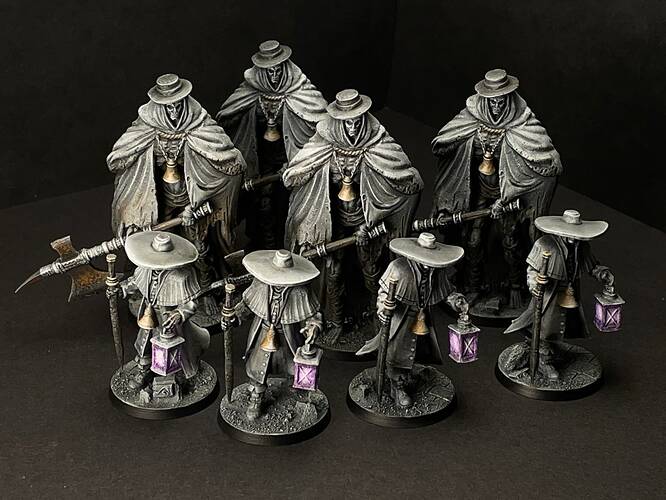 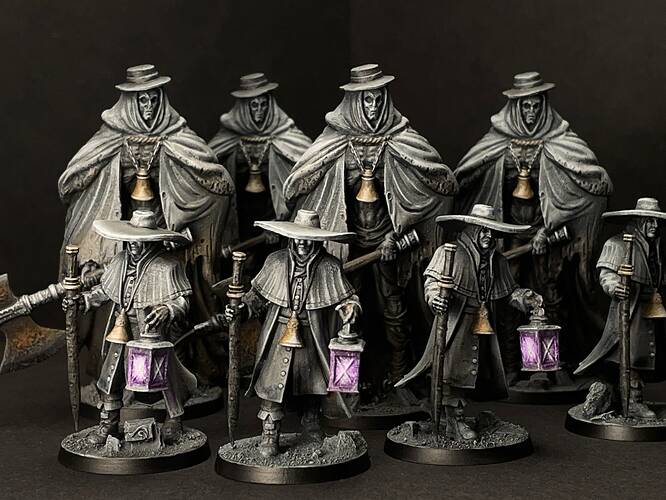 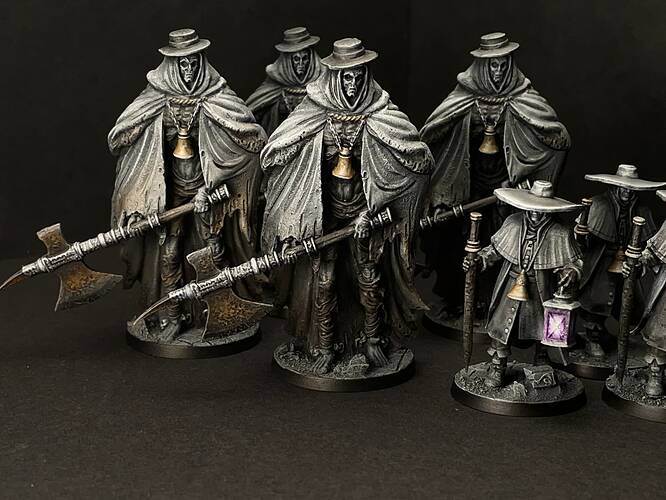 The grey and I have a very symbiotic relationship. No questions there.

Zodd be praised. I dipped 1/16th of a singular toe into the garden of @Zoddtheimmortal and here are the results. Considering these being by far the least exciting undead in the big ol’ box I unearthed, I’m happy with how they have risen into unlife again.

Gave a crack at pastel violet and am pretty pleased with my first experiment in DIY verdigris paint, aka Nihalighkahkfnghf’ucksaké oxide.

Here’s a video for anyone looking to save untold bucksonsoon and subvert GW garbagenado paint pricing. Really similar to DIY wash recipe and good for ghostly effects too.

Thanks @KhamdrimSkyMaster for ad hoc freehand prompt ideas. I noped the swan pretty hard though. 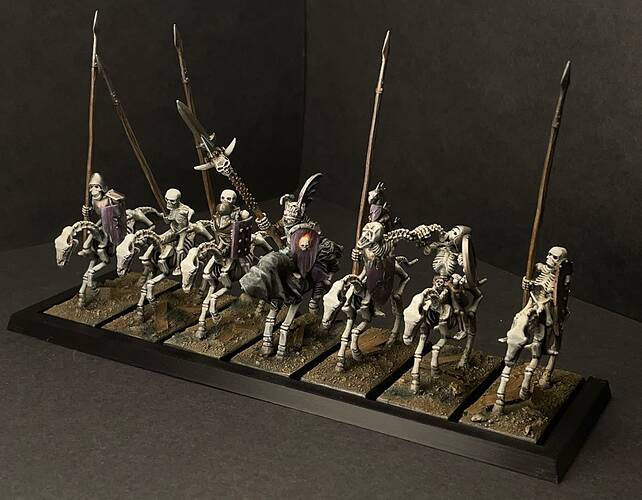 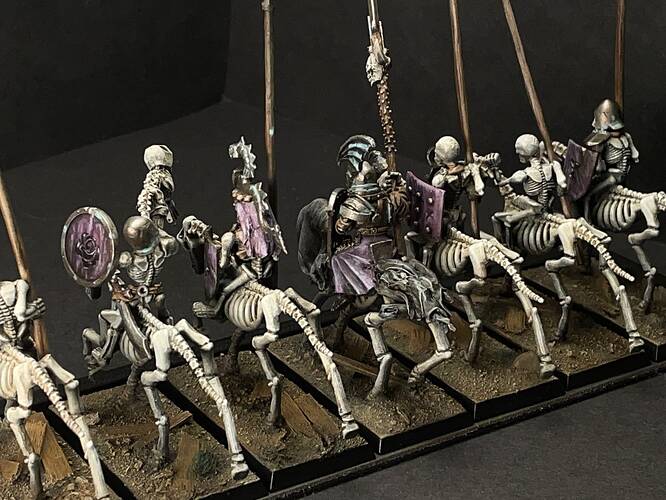 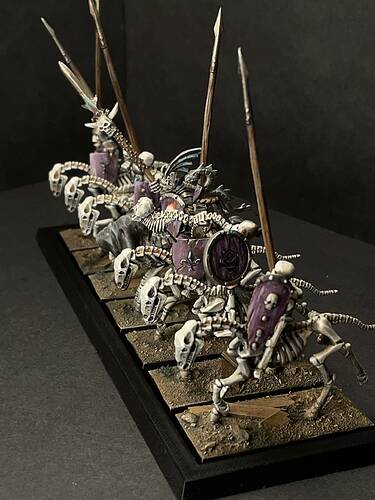 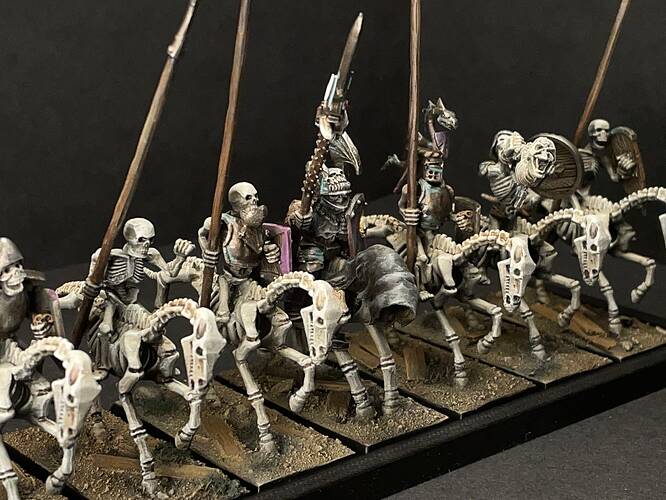 Those look great! Amazing how well the sculpts hold up when they get a good paint job on them

They look great. Lovely start to your undead army. Purple is maybe the best evil colour ?

Before you know it pastel pinks, purples and blues will be your go to colours…

Thanks Zodd! Lots of practice to get to before I land on the Manticore project

I have a lot of affection for these old sculpts and you’ve done them justice. Love that champion in particular, great job!

Tackling the biggest skeleton I own early in the year.

Forge Queen and other Dragons by Draco Studios Off-Topic Showcase

Nixis painted up pretty fast! Glad I got the base with it as it added to the look I think. @Disciple_of_Nagash have your unliving folk seen this “miniature” by Draco Studios? [image] [image] [image]

Hobby hangouts come through again. These poor neglectanids finally made it across the finish line. For years they progressed slowly on circumstance alone. They are the last Nids in my collection and will be useful in filling out warrior squads that weren’t quite optimal due to second hand models not having all the weapon options. 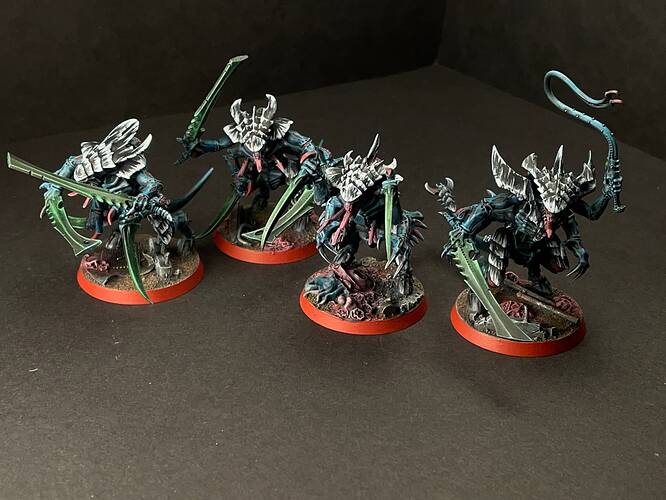 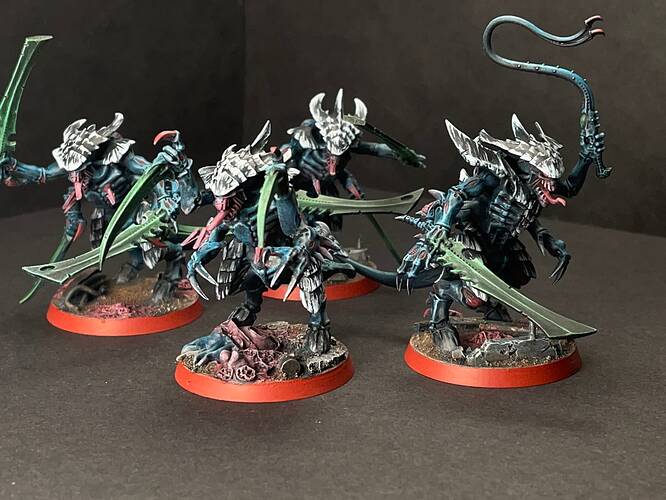 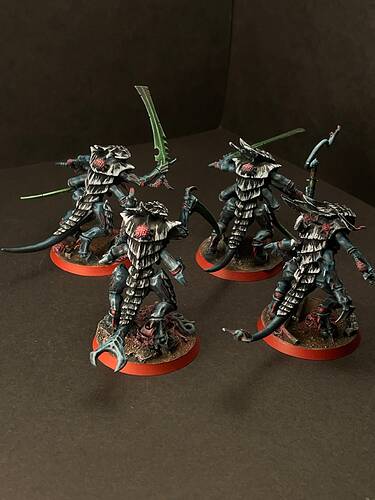 Tried to give a slight boost to the scheme I started as a kid. It was fun to revisit for just a few models including this Neurothrope kitbash which filled another hole in my army. Tyranids are one of the best canvases for bits bashing and I think any future nids that arise will be scratched together from the bits box. 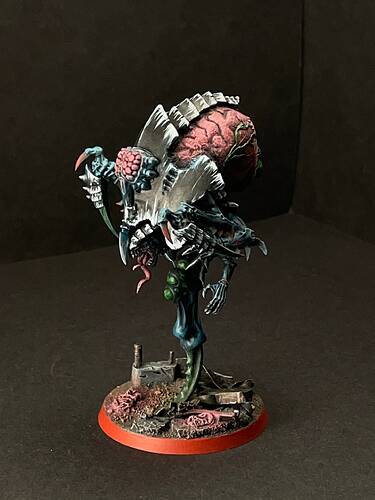 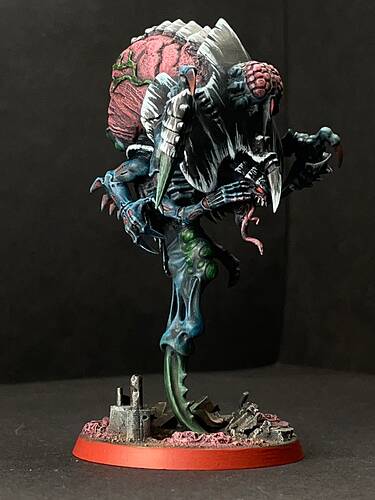 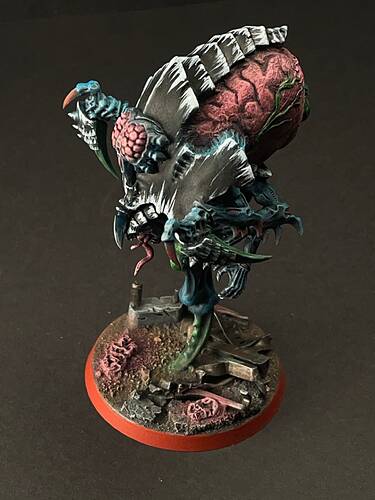 These are fantastic, very cool scheme and what a cool thing that it’s the same as from when you were younger

Damn these came out sexy! 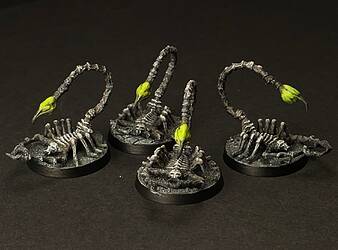 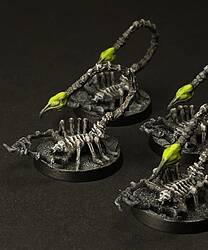 Undead Mr. Gibbs and the zombie squad have come to party like it’s the 80s. Mostly minis from the box-o-dead I acquired last year, the characterful sculpts put these near the front of the queue, a surprising feat for zombies. 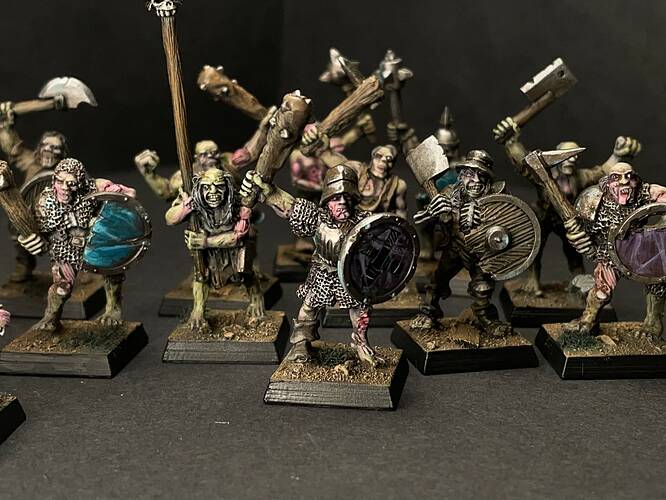 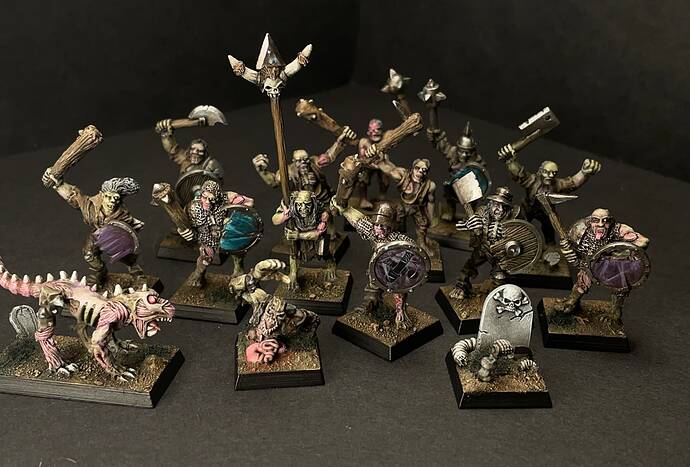 I added a Dark Eldar Warp Beast with a prosthetic club leg since I was missing bits (neglected parts from an old mystery box). A mage knight marsh zombie upper torso, a classic Gravestone, and some green stuff roller maggots rounded out the minimal converting effort. 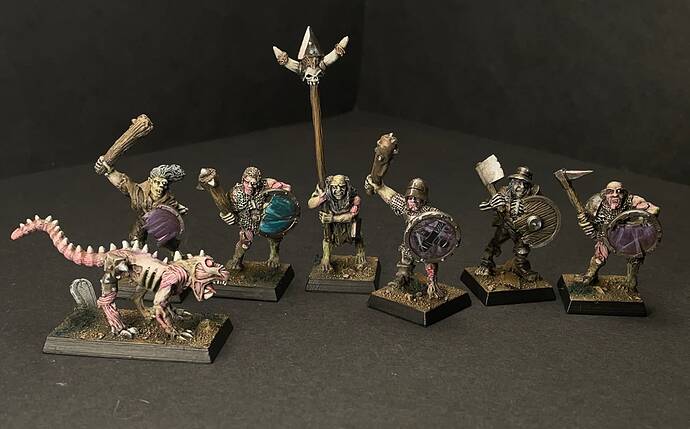 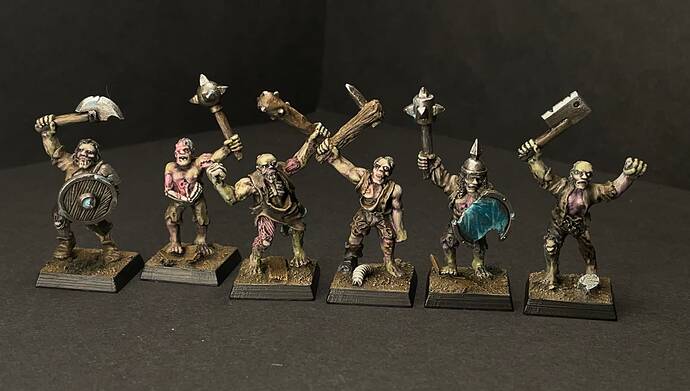 And here they are ranked up. Up next for undead, 12 Crypt Ghouls are primed but not basecoated… yet… 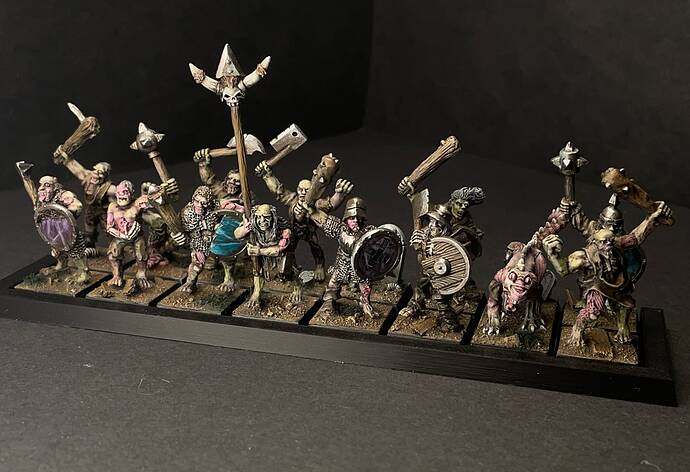 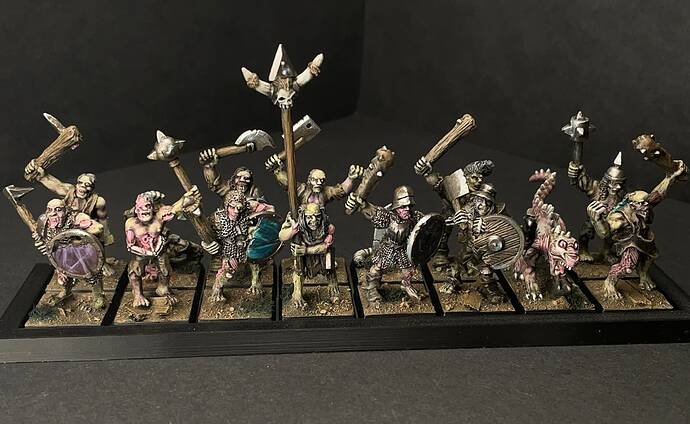