One of a few times posting WIPs here. But happy to bring some sculpting progress to completion as painting has just been mentally out of the equation for some reason.

The two carrion with wraiths were my favorite loot in the undead haul. While attempting to remove their flight stands using tedious wire wrap trees I unearthed some dead eBay bits from a Tomb Kings lot. With some green stuff I was able to make them undead again and bring this unit up to a nice 3.

A Kroot head was used and mostly covered to make the bird happen. If you’re ever looking to avoid painting I highly recommend trying to semi-convincingly levitate, pin, and pose heavy metal birds. 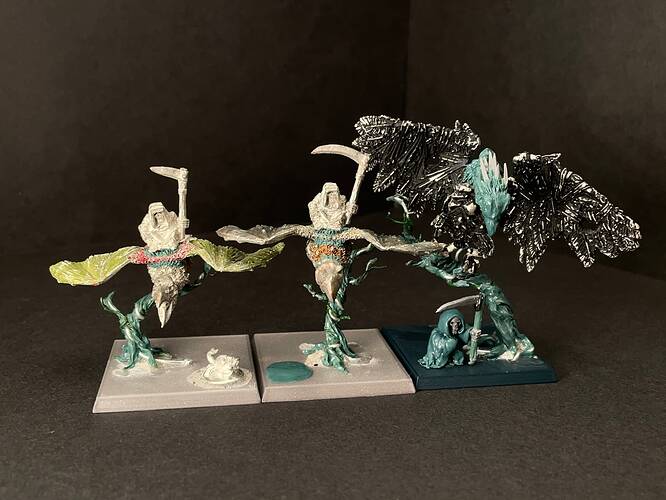 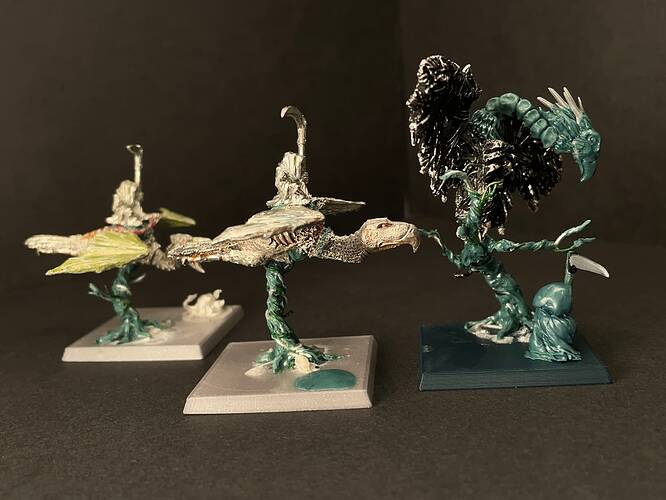 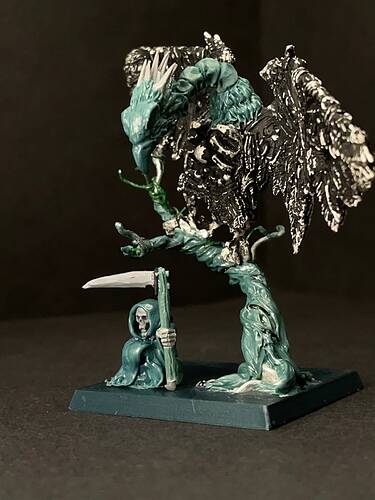 None of this is particularly my best work but I do completely adore the custom little wraith. I don’t know why I ever make anything above familiar size to be honest. Last shout to @tjub for now since I’ve run out of bonestingers.

What are you talking about, absolutely brilliant work. The pain of finding proper bird heads… I have tried to make some custom Ushabtis in the past but finding suitable models turned out to be surprisingly difficult (or I am just not creative enough). The Kroot heads seem to be a good base to work from.

The Kroot heads seem to be a good base to work from.

I think it would be an even better starting head for something smaller sized. I was thinking of just adding an upper beak to the kroot but the overall size needed to be increased. You’re definitely right. Not easy to find drop in place bird bits for models on 40mm.

And now for something completely the same: Familiars by Reaver. Hopefully these give me the painting spark again, I’ve been preparing a lot of minis lately of many varieties to try to keep motivation high. I need some momentum desperately although there’s no way I can outpace @chitzkoi’s monthly premium roast. I deserve all the salts, peppers, and grill markses. Hope you all like your calamari well done.

9 painted miniatures but sadly this is only a -6. The OSM gooper trooper was a freebie that arrived unplanned and two others are new sculpts all thus far unaccounted for. I’m happy to be zeroing out some of this year’s acquisitions though.

Long time no reave ya filthy landlubbers. Domicile relocation, settling in, summer heat, and a serious painting slump have hit hard. What better way to get cracking again than with Reaver’s Familiars 2: The Goo, the Mad, and the Tentacly. “Accidental” accumulation created this first batch: Contest prizes, a rogue Kickstarter, Old School Minis orders, and some doesn’t-want-to-paint sculpting energy. First up, this very piratey hook monster by @ATOM with some @tjub rubble. (Highly recommend Tju…

Great to see you back on the tentacle-horse boss man. Got to give the people what they want.

The moment you find these utterly powerless goobers in a secluded forest grove is when you realize… Bloodborne is more than just blood crazed dog-things. What in the cosmos is going on… 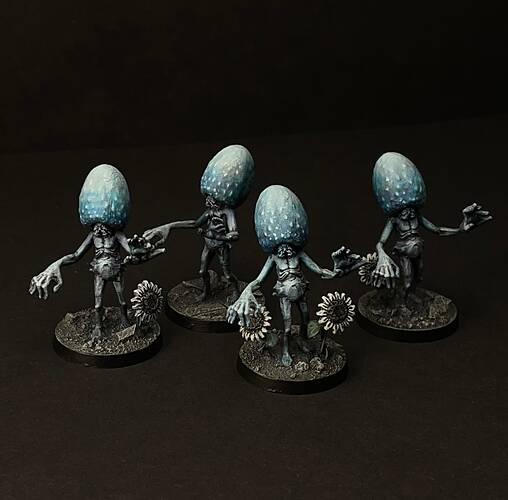 Two more down and I sure am glad there weren’t four of this mob. Two celestial centipedes (fluorescent flowers or whatever the hell they are) is more than enough. 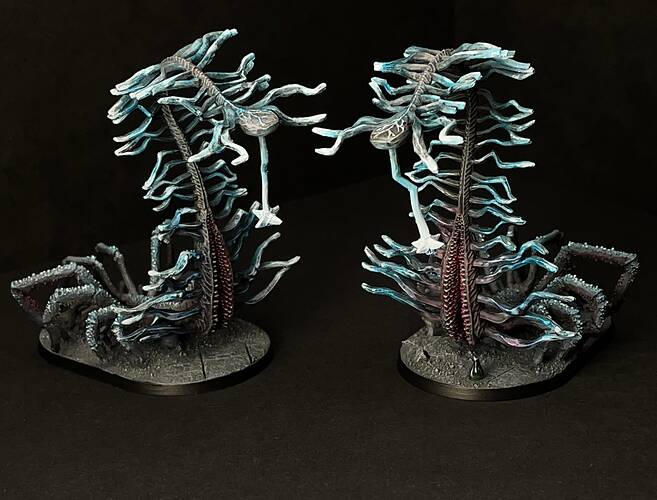 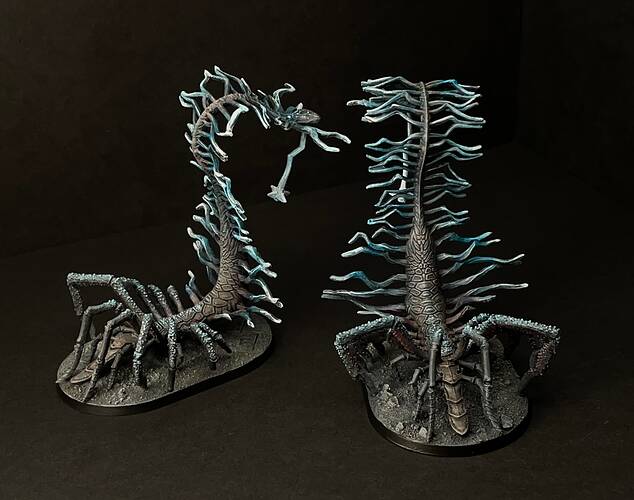 Incidentally I realized I must have completed more boxes of Bloodborne on accident without taking group shots because I only have 14 models left. Saving the best for last… what nightmares have yet to be uncovered by the moonlight. 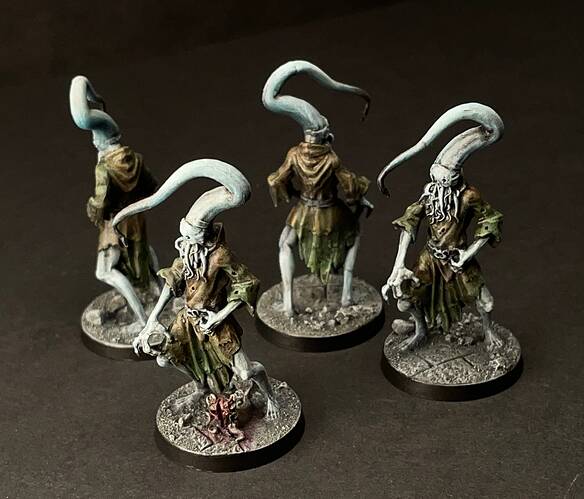 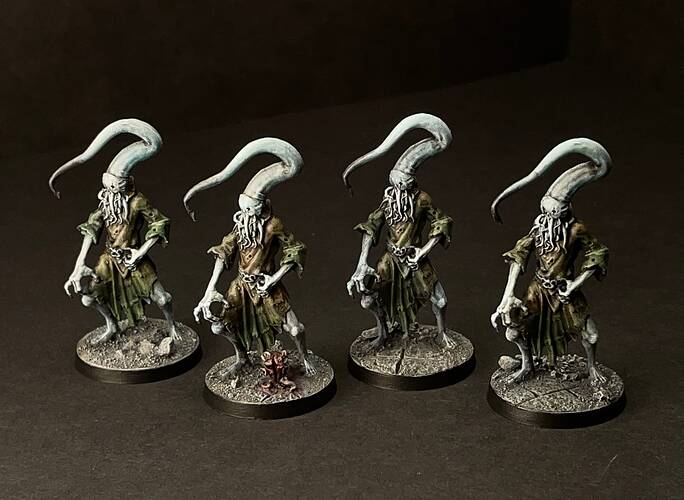 Group pictures of the Chalice Dungeon box. A bloody bow tied around another hefty swath of backlog. 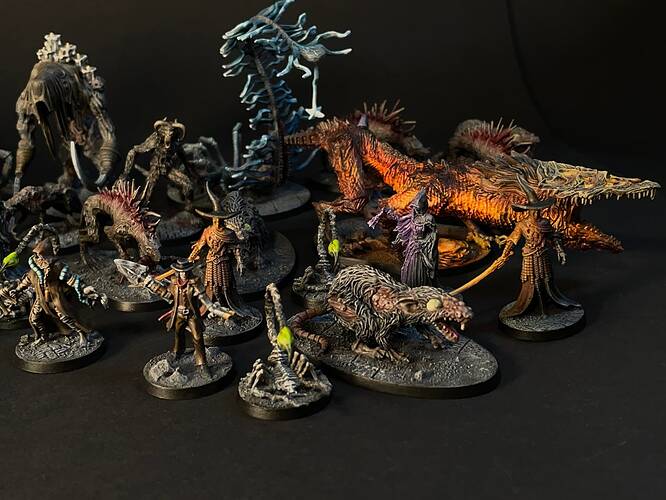 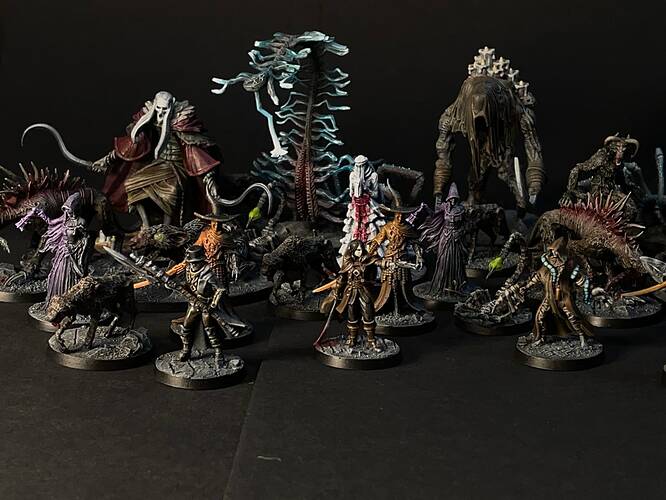 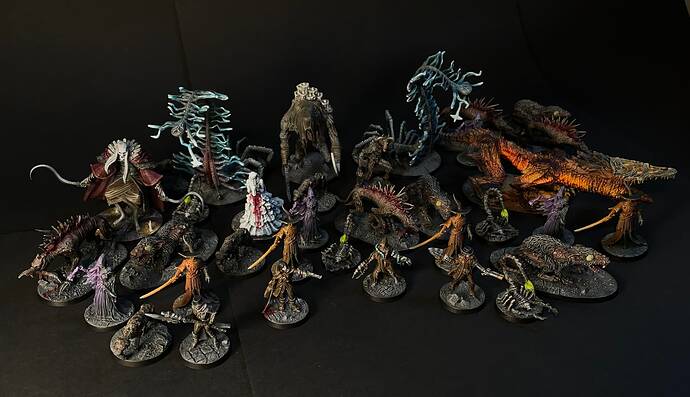 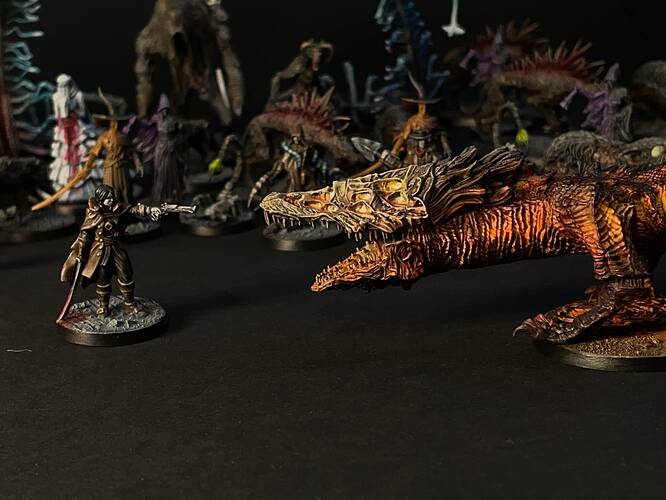 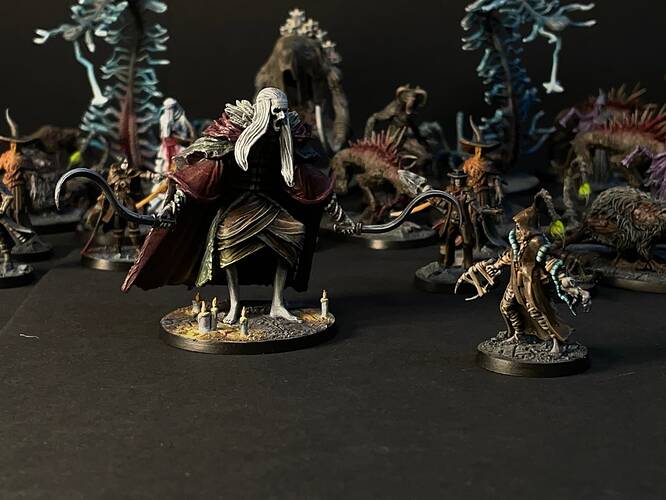 Bloodborne is at 10 remaining. Probably diverting from it a bit as none are fully ready for paint. I’m happy with the ones I chose to save for this final stretch as they’ve been the most entertaining to chuck the brush at.

There are Chaos Dwarfs projects, the arsetisans, and some undead on the bench next. 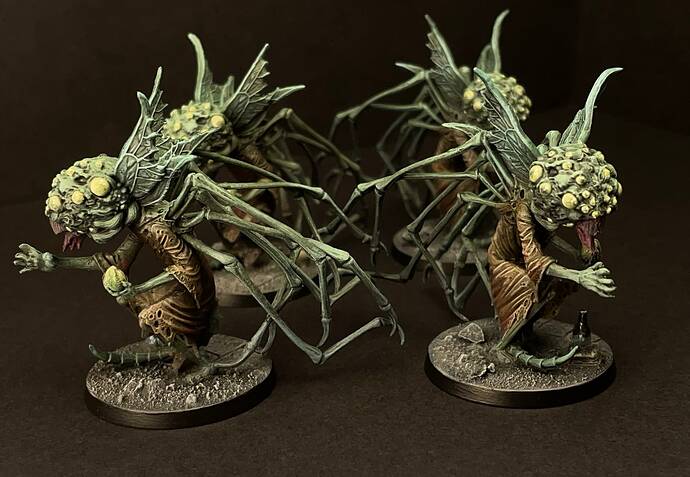 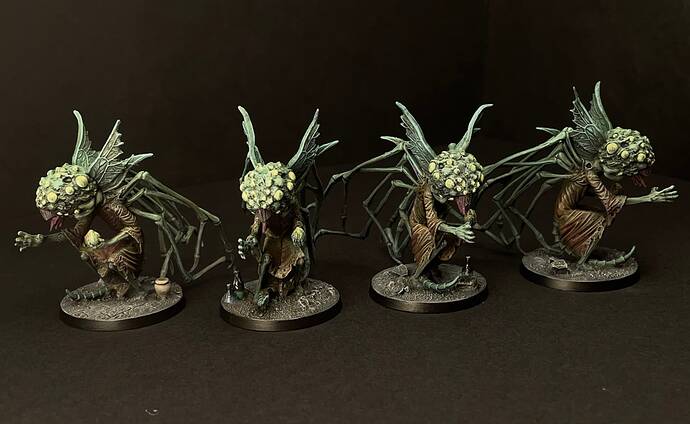 My 200th painted miniature this year! I had to make it a Chaos Dwarf. Now to start offsetting my purchases to hopefully earn my way to Blackshard

Introducing my swivel gun team proxy with bits from @oldschoolminis and a mage knight gunner. Taking lots of advice from @Zoddtheimmortal navigating my growing helms offshoot. I’m rather happy with how this fuses the old school vibe with my nautical obsession and a bit of steampunk. The mage knight bits and the pintle mount had been dedicated to a swivel gun bash for ages when the OSM tortuga and asscannon crew arrived. This was really one of the fastest kitbashes from start of idea to completi…

This…uhh
This could be a problem 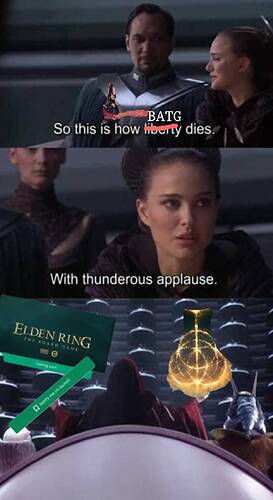 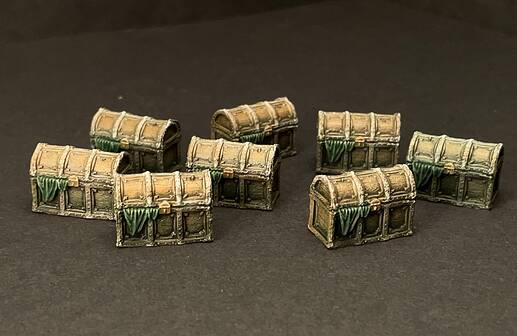 Another chorf off my desk. Getting closer to having to paint artisans models.

Quick bighat spirit Djinn to get the poor guy out of my bits bin bottom. Not sure if he’ll end up as filler in a future chorf unit or as familiar filler. It might make sense to have him next to a sorcerer nested in pirate familiars 2: dead dwarf fest. [image]

Bloodborne is in single digits now folks. 6 minis left to base and paint.

Simple but I enjoyed these slime scholars. Had to do some fun mixing with olive green and turquoise to get the color I wanted. 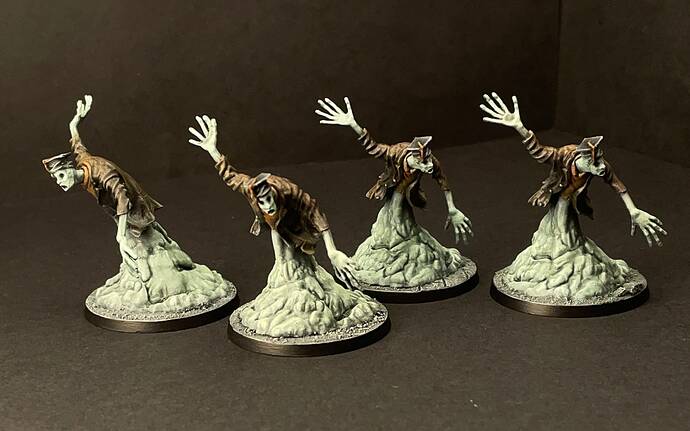 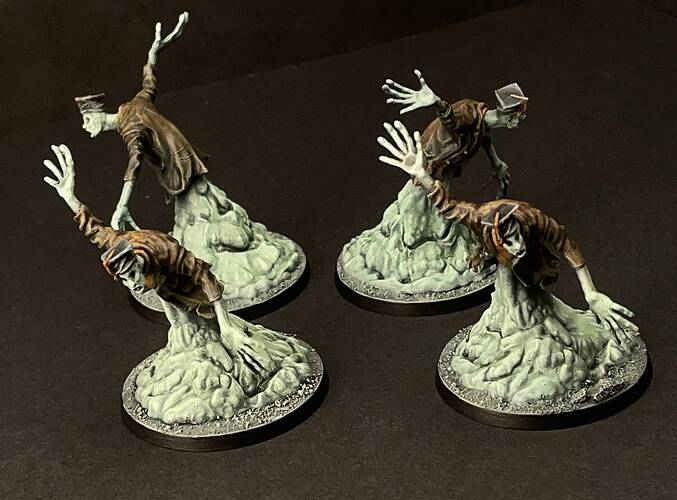 Net zero build and paint, but a fun distraction. The majority of it came as part of a “sprue” from OSM. Figured it looked like usable ork terrain with some added gubbinz from da junk ‘eap. 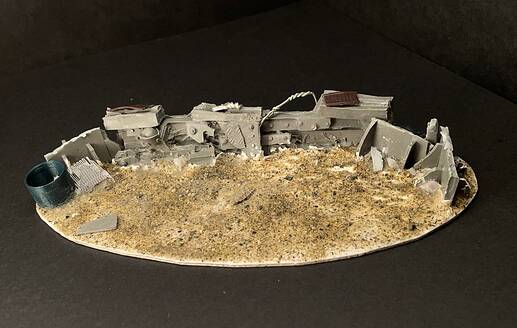 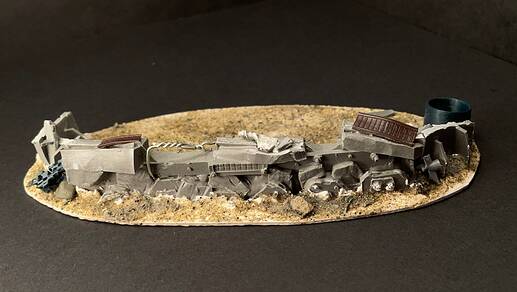 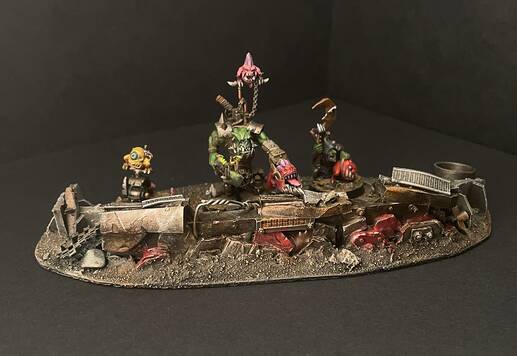 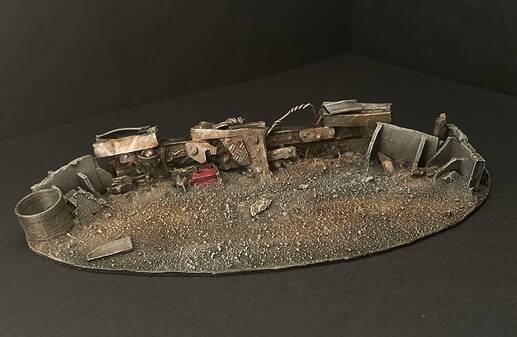 I absolutely love this game and you’ve really brought this set to life, fantastic work!