Ok, not to start a fire here but I read online that GW would close FW and incorporate and release their stuff in plastic instead a while ago. Dont remember where of course cause I didn’t really pay attention to it, but most probably on Facebook somewhere…
Now I didn’t think too much about it until the BIG Blood Bowl leak a few weeks ago when they also showed a few Star Players in plastic, both which have formerly been done be FW and in their current range. Do you think they are doing such a move and if they do could it be there’s a new range in store for us?

Could also bring back the Skullcracker, I doubt they’d have the same trouble with that kit in plastic than they did with resin

Could be good news

But they also announced that warhammer the old world would be a forgeworld release???

But it did confuse me how a rank n flank game would work in very expensive resin.

I can see why forgeworld might need reforming though. Such expensive costs and 100% undermined by an ever expanding and easy to access recasting industry (not saying that this is good or bad - that’s a whole can of worms I’m not here to open - just it’s a fact it exists)

Who knows - watch this space I guess

Would be amazing to see some old forge world scouts reborn

mini though too, the Primarchs and 30k stuff has been a huge success for them, be incredibly interesting to see what happens there if they are making them plastics

But they also announced that warhammer the old world would be a forgeworld release???

Thats true… And with the new release of HH-models it doesn’t seem likely. Might as well be some trolling, as I said I didn’t think much about it until I saw that the Blood Bowl stars were redone in plastic.

I believe the old world stuff will be designed by forge world, not a forge world release iirc. If it is I will continue to scour eBay and second-hand shop for plastic model, I have a deep seated hatred for finecast, and forge world is no better from what I heard

Ooh designed by FW made by GW sounds like the perfect combo. 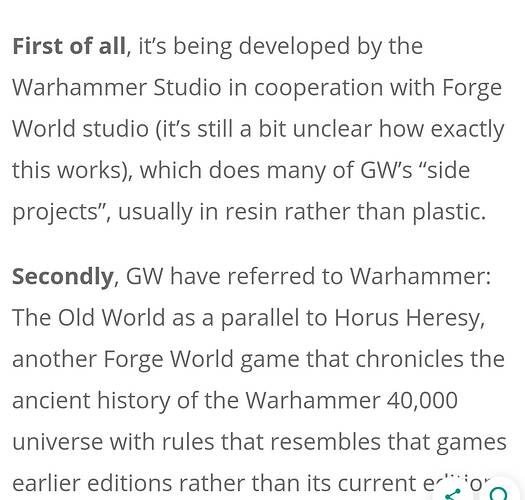 Not just recasts but very high quality 3d files and 3d printers. You can find lots of expensive GW models for free online, or just look for a nice proxy model…

I hope they don’t starve the old world players like they do with the horus herisy players though. Lots of complaints there about not getting new models an such…