Being a compilation thread of all Warhammer Fantasy Chaos Dwarf Fables. Those written and illustrated by others will have author and artist name marked out at the beginning. Be welcome to add your own if you like! You may of course post your own in a separate thread, and then add them here for the sake of completeness.

To be continued with many copied-over fables.

A fable is a short and straightforward tale with simple characters and a strong moral point. In many cultures, fables are generally thought of as tales for children, even when they are aimed as much to an adult audience as to a juvenile one. Fable authors are rare among Chaos Dwarfs, not least because the highly developed cognitive abilities in uncorrupted and corrupted Dwarf children alike place high expectations on young offspring to take part of adult folk culture. Yet still the Dawi Zharr has produced a few fable authors, most of whom were excentrics and alone in their generation. This has not stopped their fables from gaining popularity and spreading to become part of the oral folk culture of the worshippers of Hashut.

Akin to other cultural expressions, Dawi Zharr fables mirrors the convoluted and cruel mindset of the children of the Bull God. They are both stories and testaments of a world view steeped in mysticism, sacrifice, heinous cruelty and slavery, as well as domination, warfare, rigid hierarchy and eternal toil to mine, quarry, forge and build in the name of the Father of Darkness. These are not narratives of good and just deeds rightfully rewarded while wicked deeds are punished, and only rarely do they have happy endings. These are tales of a world where might makes right, where strength and cruelty are signs of greatness, and where the capricious will of the Dark Gods can bring about doom upon you at any moment. They are spoken witnesses of a world where the wicked may triumph so long as the Dark Gods wills it, and are appeased through adulation and sacrifice. The underlying world view is fundamentally different to that of most Human societies. For these stories are not bereft of moral. Instead, they are permeated by a morality utterly abominable to lesser races devoted to gods of order.

They are dark tales of a harsh and mysterious world, where blood runs and fire rages as mortals doom themselves by their shortcomings.

These are the fables of the Blacksmiths of Chaos.

Daemonsmith Uhr-Kulmbizharr the Blind was one of the most renowned Dawi Zharr authors of fable stories ever to have lived. His life of infamous craftsmanship, devious trickery, capricious cruelty and eccentric writing of children’s stories have become part of the stock legends surrounding the foundation of Mingol Zharr-Naggrund the Great. Unlike virtually every other author of the Chaos Dwarf race, every single one of his stories have entered the oral culture of the people, and only the deaf and insane amongst this malevolent race have not heard most of his fables.

Dawi Zharr authors of children’s stories are rare indeed, not least because the cognitive abilities of Chaos Dwarf children develop stronger than in Human children, and every youngster who is not a toddler amongst the Dawi Zharr is expected to comprehend, learn and recite stories aimed at an adult audience. As such, Uhr-Kulmbizharr the Blind was a most peculiar man to even attempt to write simple fables when most other similar stories produced by Chaos Dwarf scholars were, and are, elaborate mythologies.

The success of his popular work cannot be denied, however. The niche he fills is equally permeated by the fundamental, Chaos Dwarf worldview as are the more advanced Dawi Zharr narratives. This is a mindset where strength and cruelty conquers; where the weak have no other place amongst the living than as downtrodden slaves; where devious deception is a sign of ability; where utter devotion to superiors is a fact; and where survival and domination at any cost is the leading moral principle.

To read these fables is to gain a brief glimpse into the hellish thoughts, expectations and beliefs of those who sacrifice to Hashut.

The Apocrypha Uhr-Kulmbizharr [i]is a collection of writings attributed to the renowned Uhr-Kulmbizharr the Blind, but believed by all right-minded scholars to instead be the work of a lesser author using the ancient Daemonsmith’s name to try and spread his own works. Anachronistic proof of the these fables’ later date asie, parts of the Apocrypha do mimic the style of Uhr-Kulmbizharr closely, while many of the apocryphal fables are known for their sophistication or remain as popular as the fables of the actual Daemonsmith of ancient times.

Utnipishzim the Proselytizer was a Sorcerer-Prophet in the early days of the Dawi Zharr when the worship of Hashut had yet to cement itself. He made his name during this time becoming known for his extremely active approach to spreading the new faith. Later he was one of the many contributors to the construction of the Great Temple. Though a deep thinker, he was a mediocre sorcerer and turned to stone before the Temples completion. His statue stands to this day, crumbling and nearly anonymous near the doorstep of Zharr-Naggrund.

Writing in the days before the establishment of many latter conventions, and following a cult of Hashut which became defunct, the majority of Utnipishzim’s writings have not stood test of time. A writer of much longer narratives, these volumes were considered obsolete by the Sorcerer Prophets who emerged after his petrification, quietly declared heretical, and destroyed, taking much of his biography with them. To this day little survives of him outside his story’s intended for a tiny fraction of a tiny race at the barren edge of the known world. A cruel fate for one so obsessed with eternal legacy, and so devout in his belief that Hashut was the all powerful arbiter of it.

Seeing good value in many of his passages however, and not wishing to disown a Temple founder completely, the Acolyte Shim-Izdur was charged with taking excerpts from his stories and converting them into a shorter format to preserve his more acceptable messages. What remains are the Fables of Utnipishzim, heavily edited, yet still reflective of the ruinous zeal which drove those early devotees of the Dark Father down their dolorous path.

Due to being intended for study by the priests, many of Utnipishzim’s fables are taught to the Novices and Acolytes of the Temple, with a common emphasis on the trials of those who are destined to command magical power. As the original author was unaware of the great degree to which Dawi Zharr society would become inundated with bound Daemons, that many of his works now apply to the common Dwarf is an (un)happy coincidence.

Despot Zhargonidus Doombeard of clan Boruzzik is the only renowned Chaos Dwarf author of fable stories alive in the current day and age. The first famous fable author to emerge in centuries, Zhargonidus’ infamy as an eccentric, cruel savage, and his reputation as a battlefield genius skilled in the arts of psychological warfare (i.e. striking terror into the hearts of the foe through vicious and very visible acts of cruelty) far outstrips his renown as an author. The style of his stories mimics that of preceding fable authors, not least Uhr-Kulmbizharr, and much of his work have already entered into the oral folk culture of the Dawi Zharr.

Characteristic of the majority of Zhargonidus’ fables, is the use of themes not available to the fable authors of ancient times. During the foundation of Mingol Zharr-Naggrund the Great, scarcely no knowledge of distant races like the Lizardmen existed amongst Chaos Dwarfs. Likewise, Ogres had yet not migrated into, and conquered, the Mountains of Mourn, and most Humans were but savages armed with weapons of stone, wood and bone, with the exception for Nehekhara of the Pyramids. Back then, Black Orcs did not yet exist, and Hobgoblins were but one of many Greenskins to be enslaved.

Most importantly, however, have been the advances in Chaos Dwarf engineering and Daemonsmithing. Though such crafts and arts were quite formidable even during the foundation of Zharr-Naggrund, millennia of progress have propelled the Dawi Zharr mastery of machinery and Daemons to unsurpassed and fearful heights of ingenuity and insanity.

All these modern themes are frequent in Zhargonidus’ fables. One thing is clear above all others, however: The downright evil and twisted mindset of the Blacksmiths of Chaos have remained constantly dark and cruel throughout the ages. Empires rise and fall, yet the hellish realm of the Chaos Dwarfs and their demented minds endure.

I so know people like this, they best keep eyes peeled for giants LOL 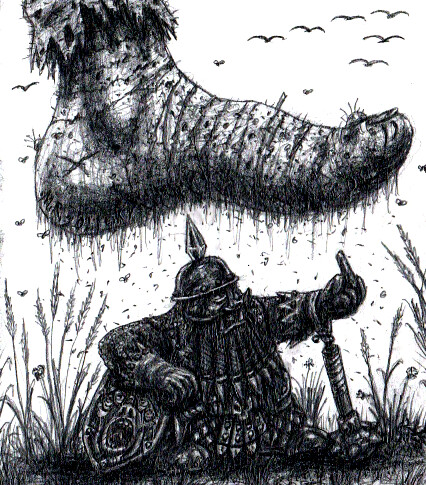 The Taunter and the Giant, by Uhr-Kulmbizharr

Once upon a time, there was a foul-mouthed heathen of a man, gesturing ill signs with his hands and waggling his tongue in a stream of obscene curses and insults that made maidens blush and bull charioteers shy away from his path. So many people did he casually offend, that hundreds upon hundreds of kinsmen, neighbours and strangers harboured grudges toward him and his endless affronts.

One day, the taunter did his wartime duty and served in the infantry. Mace and shield did he carry, and from a distance did he heap scorn and libel upon the greenskinned foe. The battle swung back and forth with all the Chaos of combat, and at one low pulse of the armed clash, the taunter filled his lungs with dusty air and let out such a torrent of foul language upon the Orcs and Goblins, that his own kinsmen recoiled from him.

So vile were the taunter’s flood of swearing and impiety, that the Father of Darkness silently reminded all the other Chaos Dwarfs of all the times the taunter had insulted them and their clan’s honour.

With these grudges fresh in mind, everyone but the taunter saw the enemy Giant approaching, and yet no one said a word of warning, even as the ground shook harder and harder from its heavy tread.

“May the damn Thunderbull stampede over your blasted carcass!” yelled the taunter. “Can you feel the bloody quake in the flaming deep? That is the Bull Father copulating with His shackled harem heifers, and you’re next in line for the rutting, maggots!”

Thus the taunter was caught up in the gleeful joy of slinging his own foul words at others, and grudges were settled as no kinsman raised their voice to warn him of the descending foot. And so the Giant stomped the taunter flat into the ground, and smeared his gory remains across the battlefield like a run-over Snotling. For such is the fate of those who cannot hold their tongue.

- The Taunter and the Giant, by Daemonsmith Uhr-Kulmbizharr the Blind, the renowned Chaos Dwarf author of fable stories during the foundation of Zharr-Naggrund