Which Bull Centaur proxies to use?

I’m sitting here watching some Bull Centaur (BC) proxies from Lost Kingdom print out and was curious how everyone feels about which models they prefer - the regular Bull-thar models or the Anointed Bull-thars?

I feel like the Anointed are closest in size to FW Renders while the regular Bull-Thars are closer to the classic BC. I am debating resizing the models to find a happy medium but always appreciate a healthy discussion on matters so subjective in nature.

So far I haven’t seen the anointed ones with my own eyes, but I do have the regular ones here. They are nice enough and nicely carry the LoA / Lk aesthetic to the original scale. But next to the FW ones they are really tiny.
For me it depends on how you want to use them in-game: If you play AOS or WHFB with the Tamurkhan list and you need them as Bull Centaur Renders, the Bull-Thars are just too small. If you play WHFB 6th edition or the WAP list and want to use them as regular Bull Centaurs, the anointed ones would be much to big, but the regular Bull-Thars have the same nice grim-dark look and fit very well with the LK range or the LoA chaos dwarfs.

For reference here is a picture of all of LKs Bull-thars lined up at their regular sizes. I don’t have any FW Renders but could put a BloodBowl Bull Centaur beside them if requested. 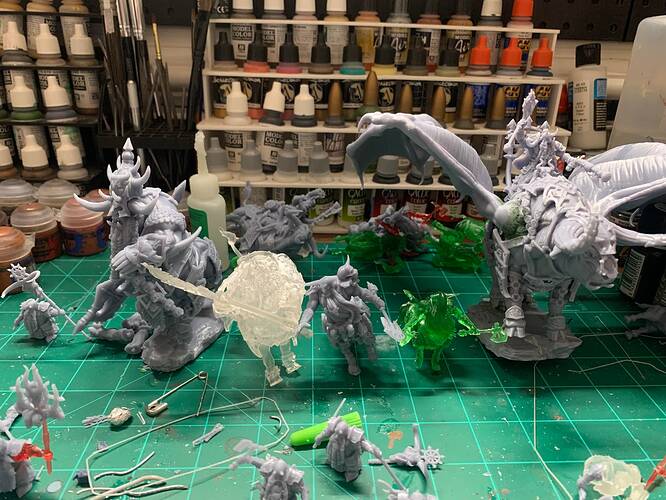 You can also have a look here, in this thread are some side-by-side size comparisons with the FW ones and various STLs

So the regular Bul-Thaurs are significantly smaller than the FW Bull Centaur Renders, they are the equivalent of the good-old 90’s Big Hat Bull Centaurs. Then again I have them as classic physical models, if you have the stls, you can just upscale them, right? [image] [image] But LKM also released the anointed Bull-Thaurs, these should be the same size as the FW ones right out the gate.

My way to go for BC are russian alternative ones for the huge ones, ok not a fan of LK style, bit i dislike their smaller bulls a lot, while the huge ones are at least similar to FW ones
For classic bulls, aside the originals (DUUUUH) there are ofc the 2 Fabelzel ones

Great resource in that thread, thanks @Jasko Jasko!

@Loidrial isn’t Russian Alternative closed down? I did always like their style of BCs but unfortunately never bought in.

I do like the Fabelzel stls and have them ready to print but I already made a ton of LK’s before I found out about Fal. On the other hand I could always scale up Fal’s stls to FW size

For the little ones there is not much choice but LK, which fortunately look very decent, but you have to scale them down a bit as described in the thread linked by Jasko.

For the big ones there is more choice, and the LK option looks considerably worse, IMO.
Russian Alternative being one of the better ones, but I can’t recall what else I found during research from the top of my head.

About RA: Not sure they closed down. They can’t receive direct payments due to embargo, and they haven’t established a workaround. But there are rumours you can buy from them via direct email and if you manage to get the payment to Russia (which the hopefully would know how to do).

Via china or something maybe?

I mourn for the tall hatists amongst us.

What about blowing up fabelzels to bigger proportions?

I went the giant bear

route. It would work well for the hatters too. Khorne juggernauts is another option

Are you talking about LK’s new Ursa Miners (my name cause you know bears and dwarfs/miners…stupid haha)?

I do love their aesthetic as well.

Via china or something maybe?

I heard some services go via Kazakhstan, but I don’t know details.

For completeness,
I just found that the Yedharo Bull Centaurs made their way to etsy.
Not quite sure what size they are, i.e. what bases they are standing at.