I started another army…because of course I have

A mate of mine recently finished some square bases rank n flank projects and I was a little jealous of how orderly and badass they look all together. It causes me to get Misty eyed and nostalgic for square bases.

Then a few months @Admiral and I discussed similarities to 40k lore and Roman history elsewhere in the forum which precipitated a massive relapse in reading and obsessing over Roman history haha . This happens to me at least once every few years. 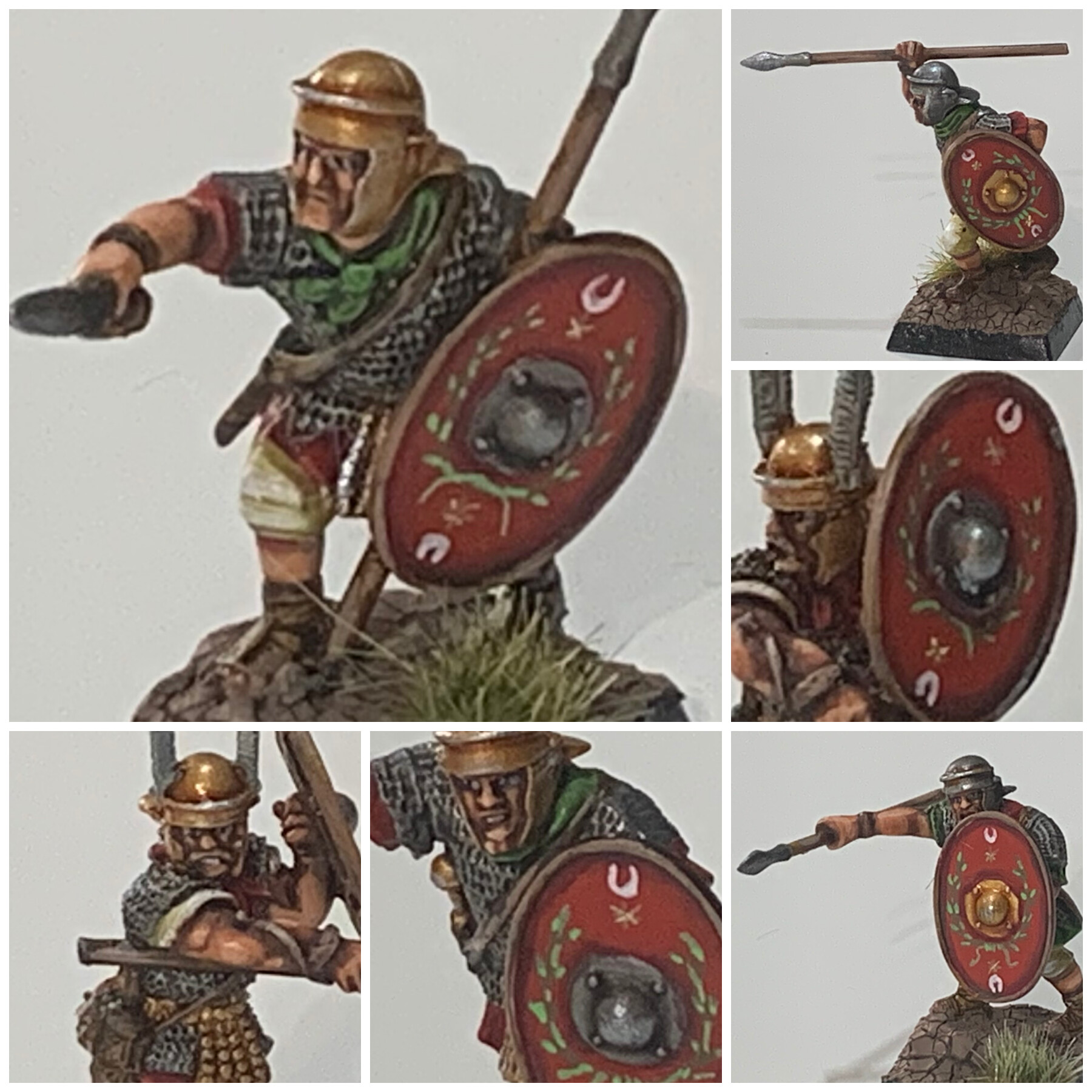 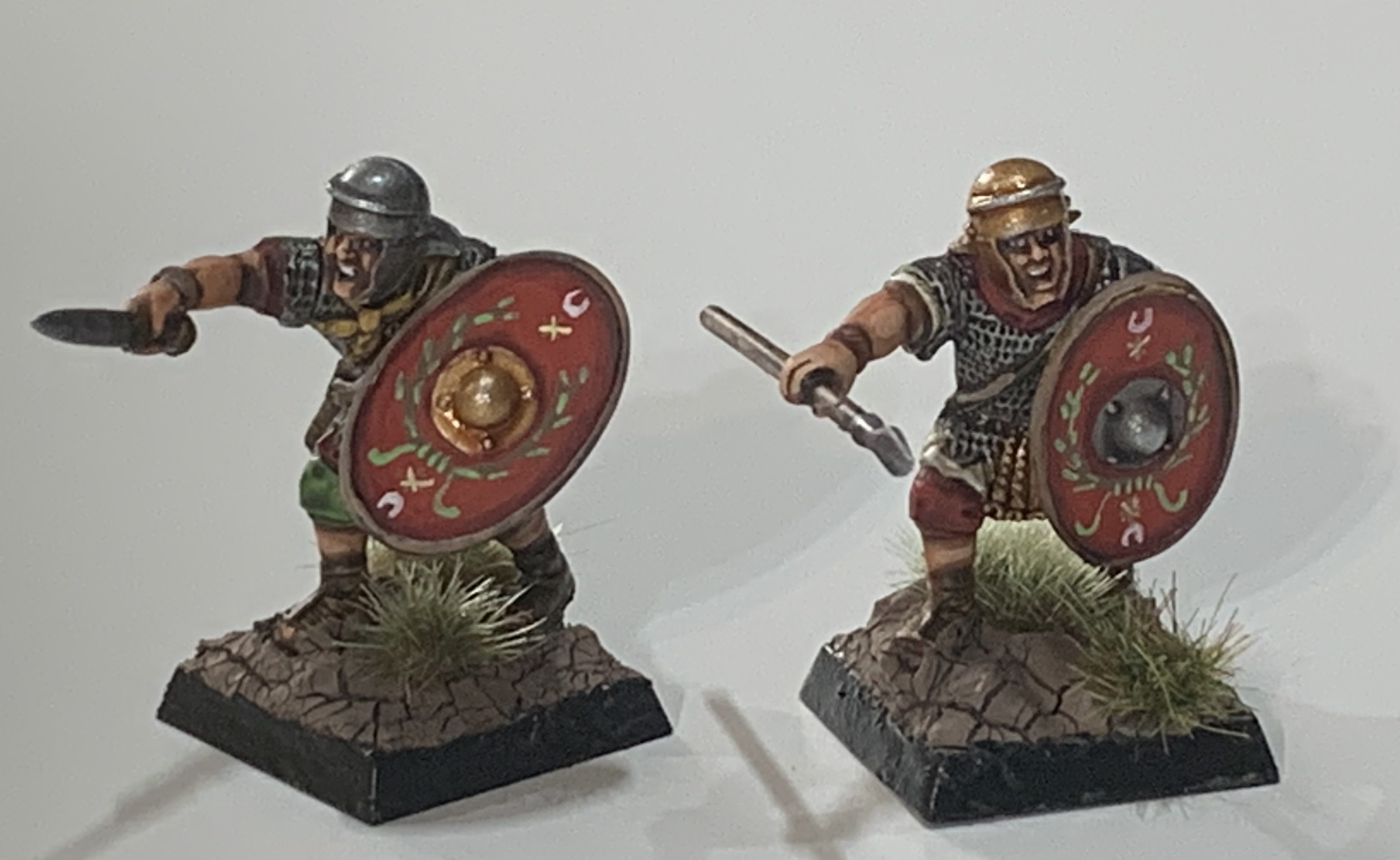 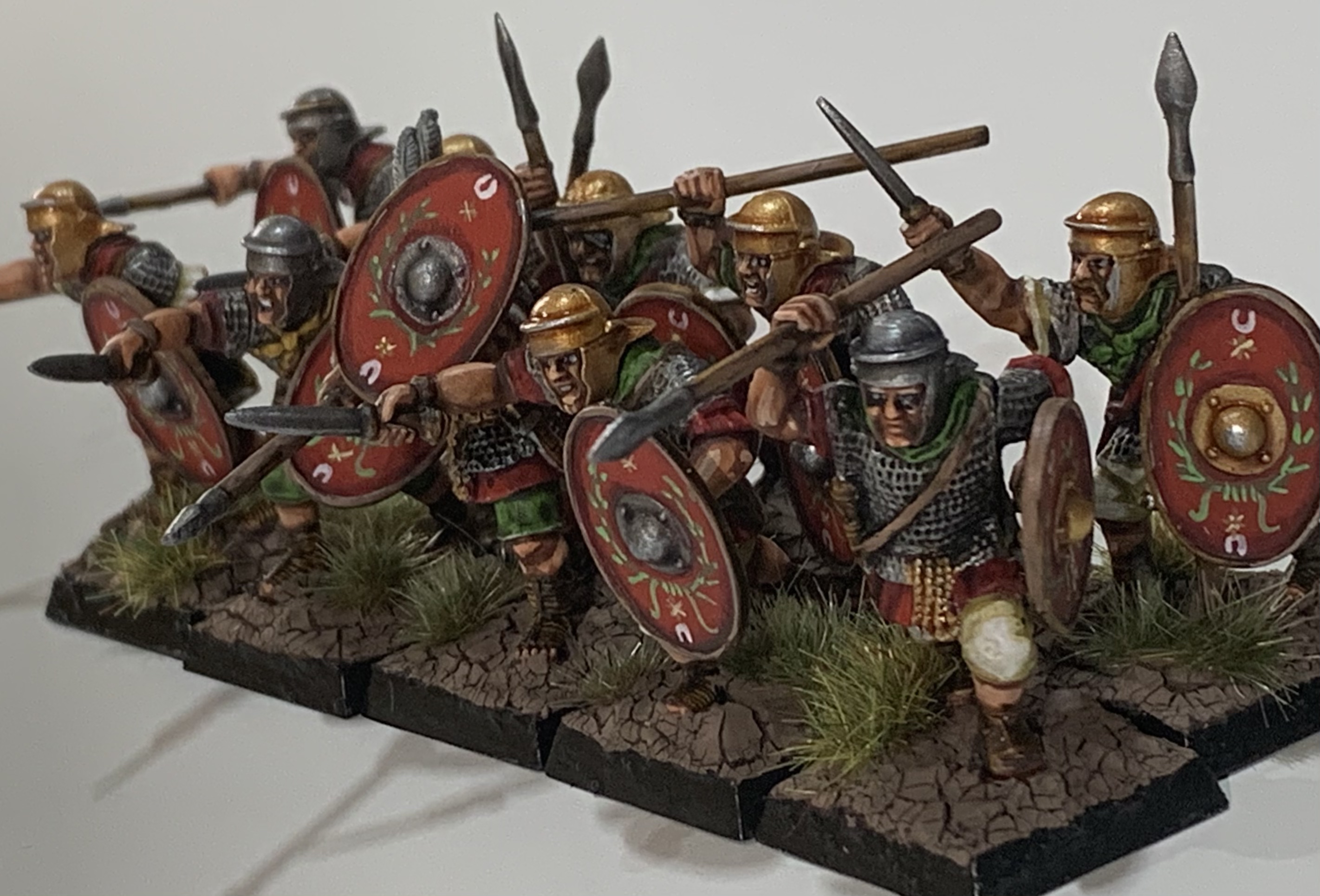 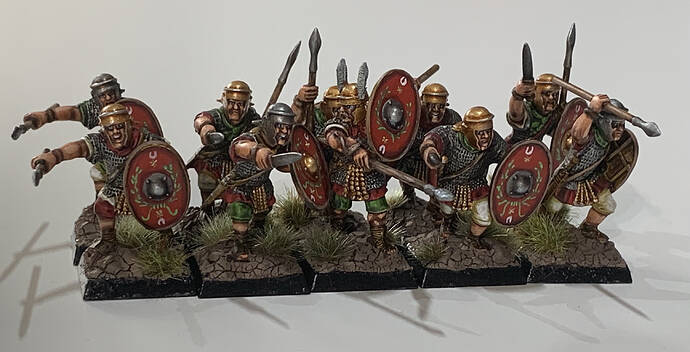 They look great. You could use these as dogs of war or empire in warhammer too.
You are a prolific painter, the early dark nights dont appear to slow you down. You are definitely not painting these in your shed yet i think haha

And yes multi use definitely

Basing them this way gives me access to warhammer or kings of war rule sets too.

40 euros gets you imperial and republican roman army, Celts, germanians, carthaginians and lots of extra characters and scenery - well worth checking out those who print and like this era

I know I’ve said it before (and probably will do so some more times), but man, your painting is both incredibly quick and beautiful! I especially like the shields - that’s some lovely freehand decoration.

Good idea with the multi-use basing. One thing I love about Kings of War and Vanguard is that you can bring along pretty much any historical miniatures you happen to own and simply use the Kingdoms of Men, Brotherhood, or League of Rhordia list to play them.

My mate got the new rulebook so when the worlds normal (I don’t know about all of your countries but things are getting tough here again) I’ll probably give it a go.

Thanks for the compliments mate. Means a lot

I’ve really been doing my homework on the colours etc trying to get as historically accurate as I can (ie not all Romans wearing red tunics for example) but it’s hard cos all that stuff biodegrades so the evidence just ain’t as abundant as you want it to be.

The history Youtuber Metatron does quite a few vids on Romans, so if you haven’t already, worth checking him out.

Impressively quick and excellent painting! Lovely results as always, and particularly the freehand shields. Haha, happy to hear that our chat here sent you on one of your regular Roman frenzies. I know well that phenomenon. :16:

Yeah I love his stuff 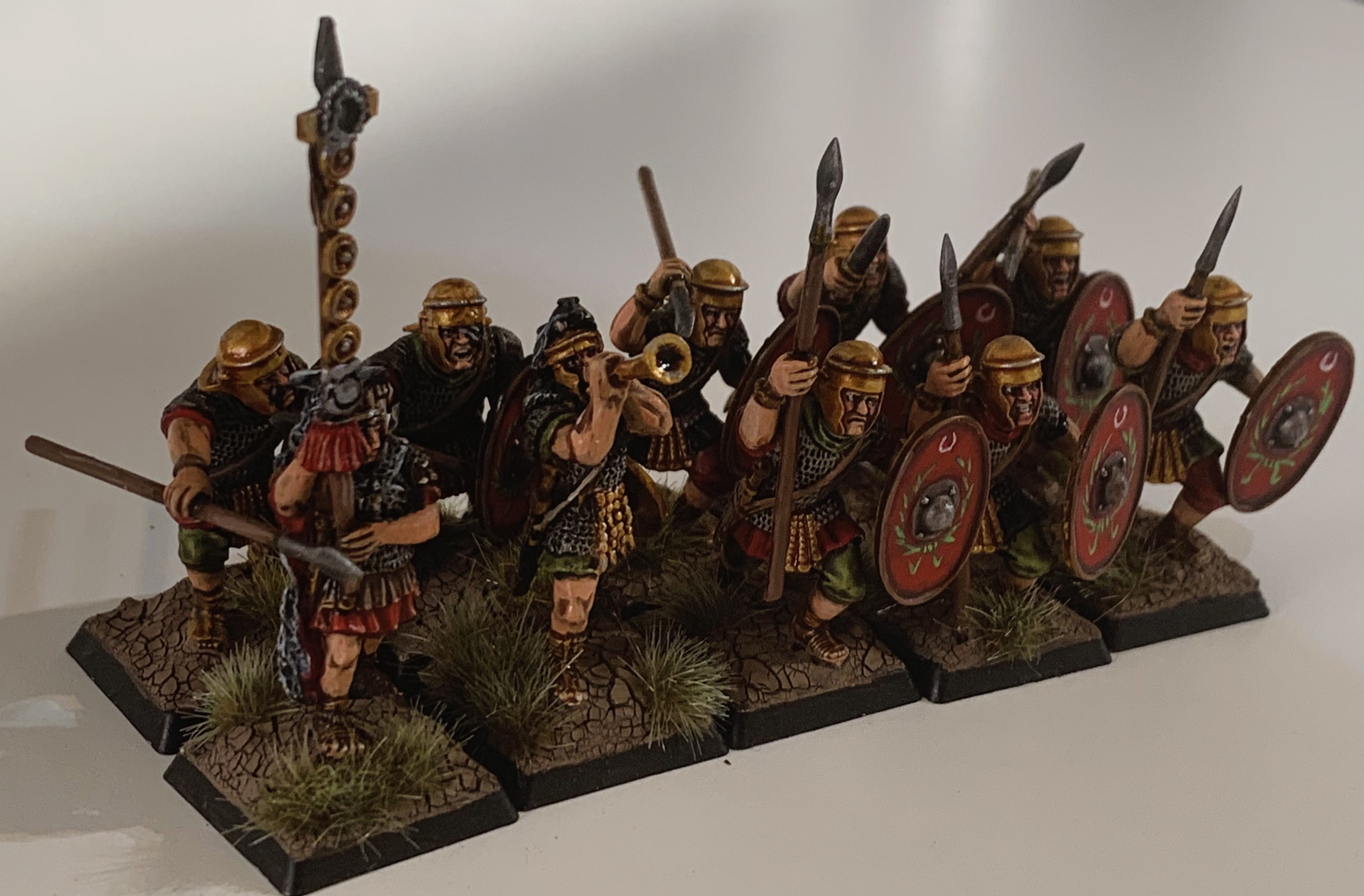 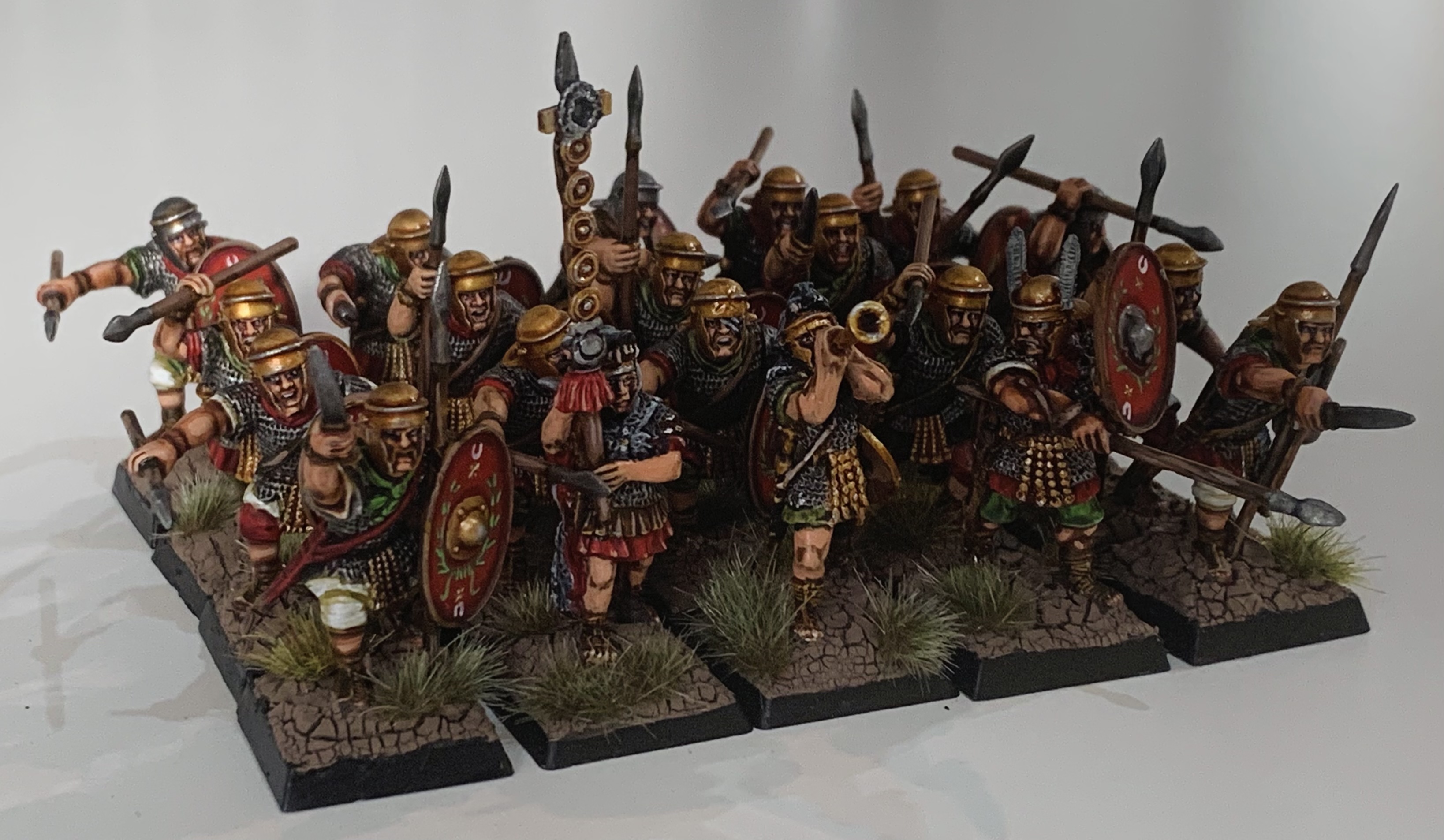 I may be in love with these guys. :01: The bases are very nice, by the way. How did you do that cracked earth effect?

Have you looked at Infamy! Infamy! ruleset by Two Fat Lardies? I love their games generally and it might suit this latest project.

It’s always good to see Romans painted up - especially with oval shields and chainmail.
And yes, that mask

I’ve heard good things about this system so may be worth checking out. Primarily will be woe and kow for now I think as it’s what my mates are playing. I made my first kow style “unit filler” today which I’ll share when I’m done.

Yeah I love the face masks - the model didn’t have one so I sculpted on one.

@GIronshield I’ve never read the book but have seen some of the art. So inspiring for this project. I’m fully aware , because of the games favoured by my gaming group, my historical army will spend more time fighting beastmen, orcs and monsters than Celts or Germanians haha. 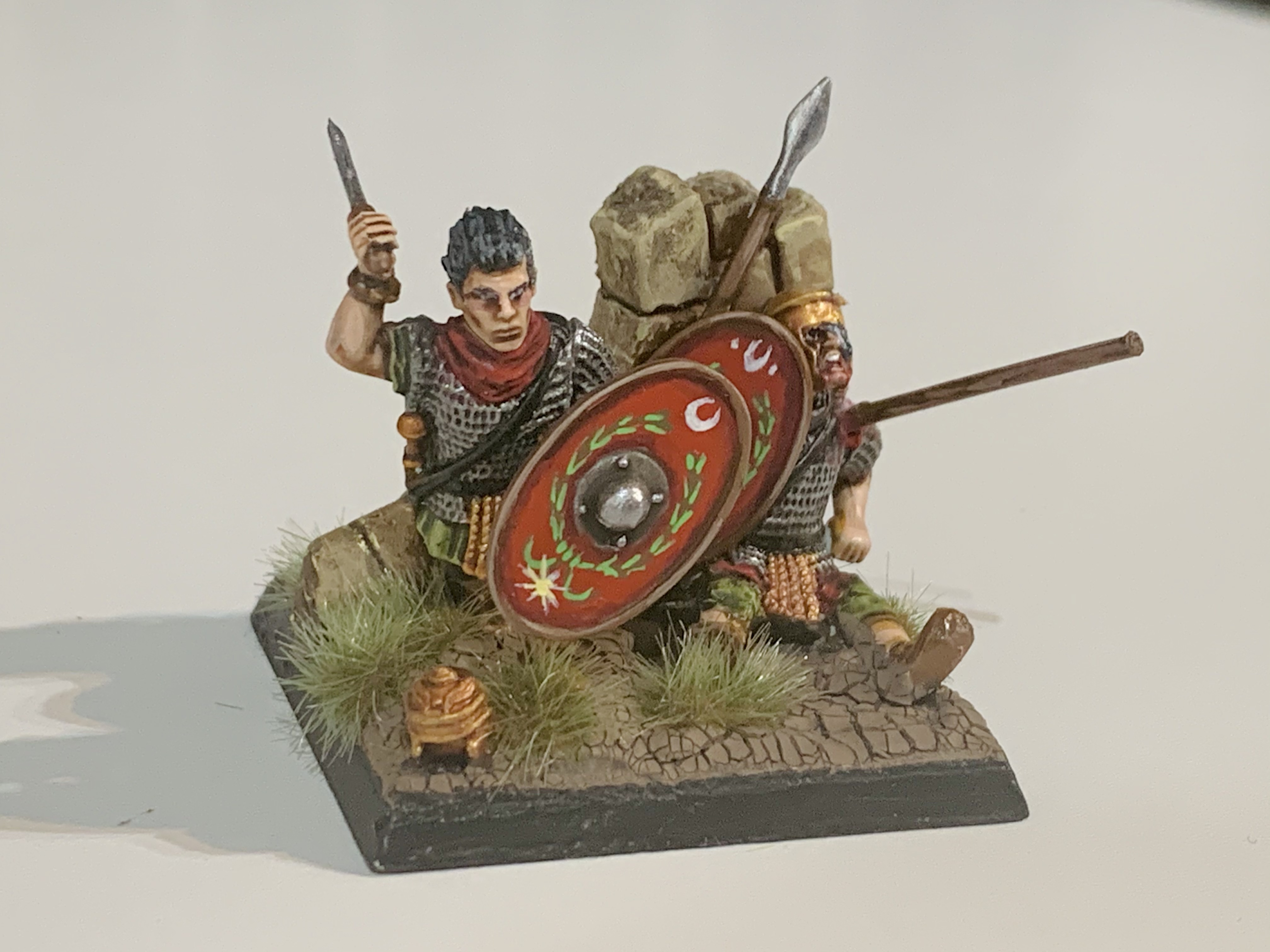 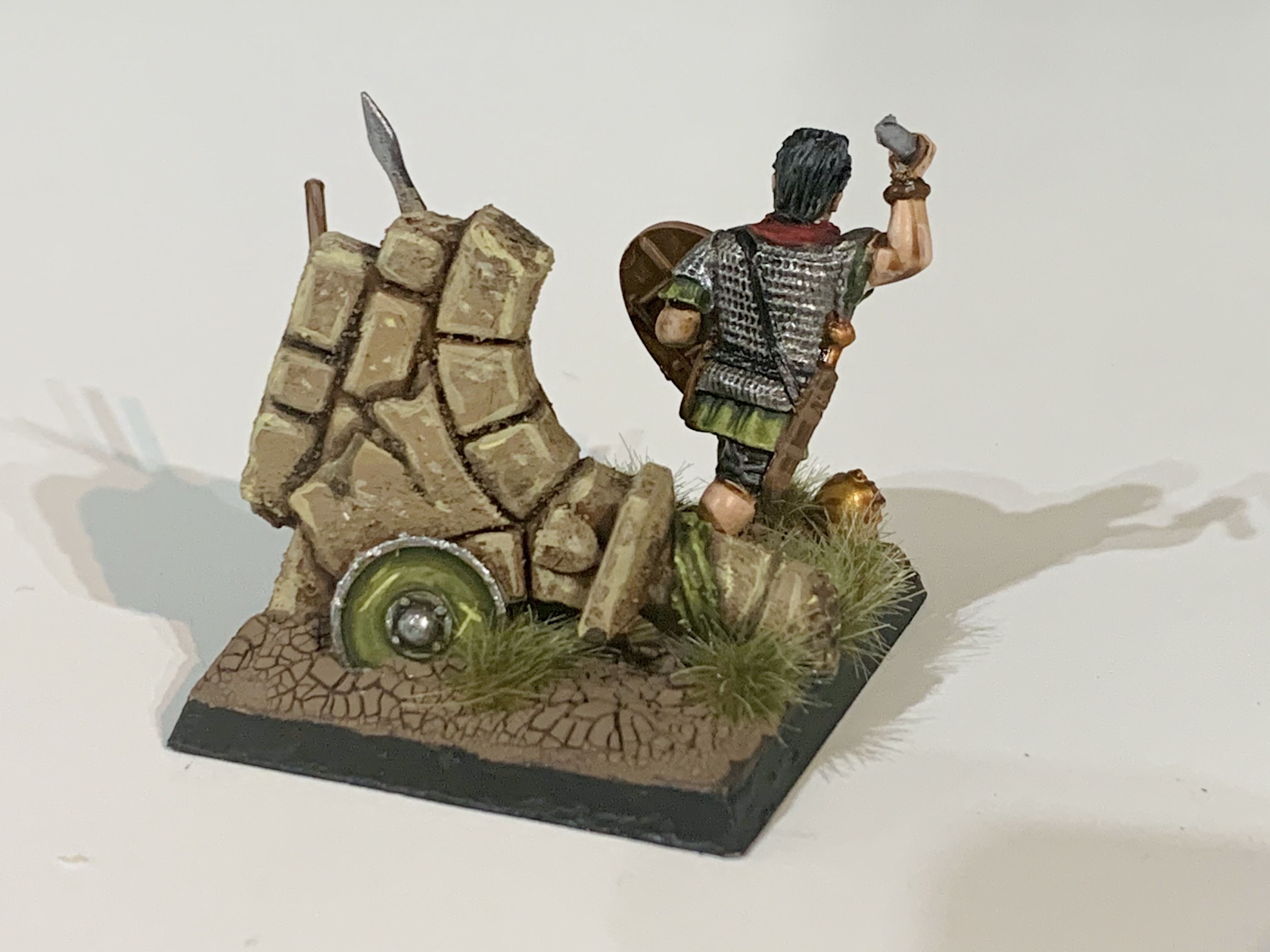 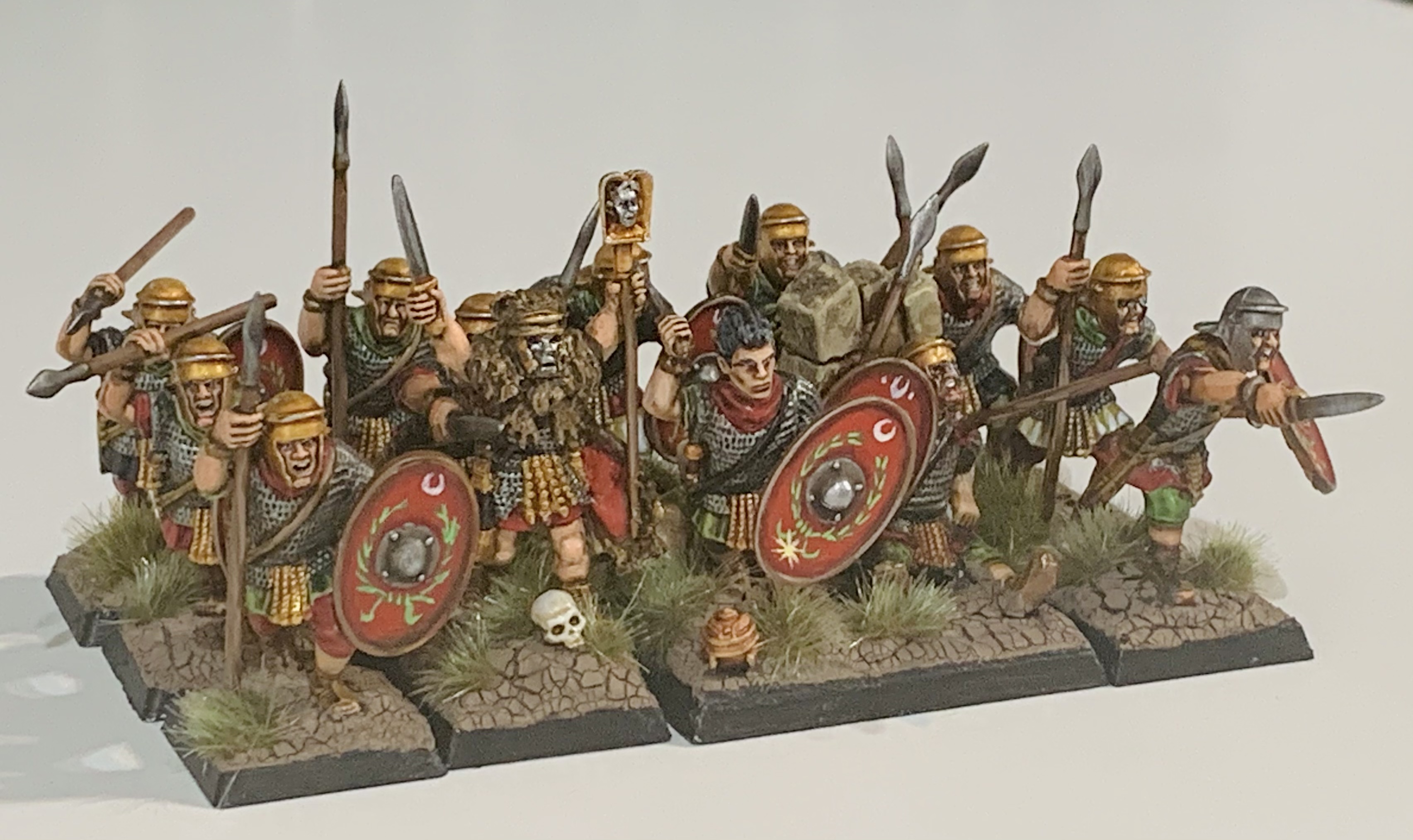 Unit fillers…this is a new concept to me. Opens up a whole new world of modelling opportunities 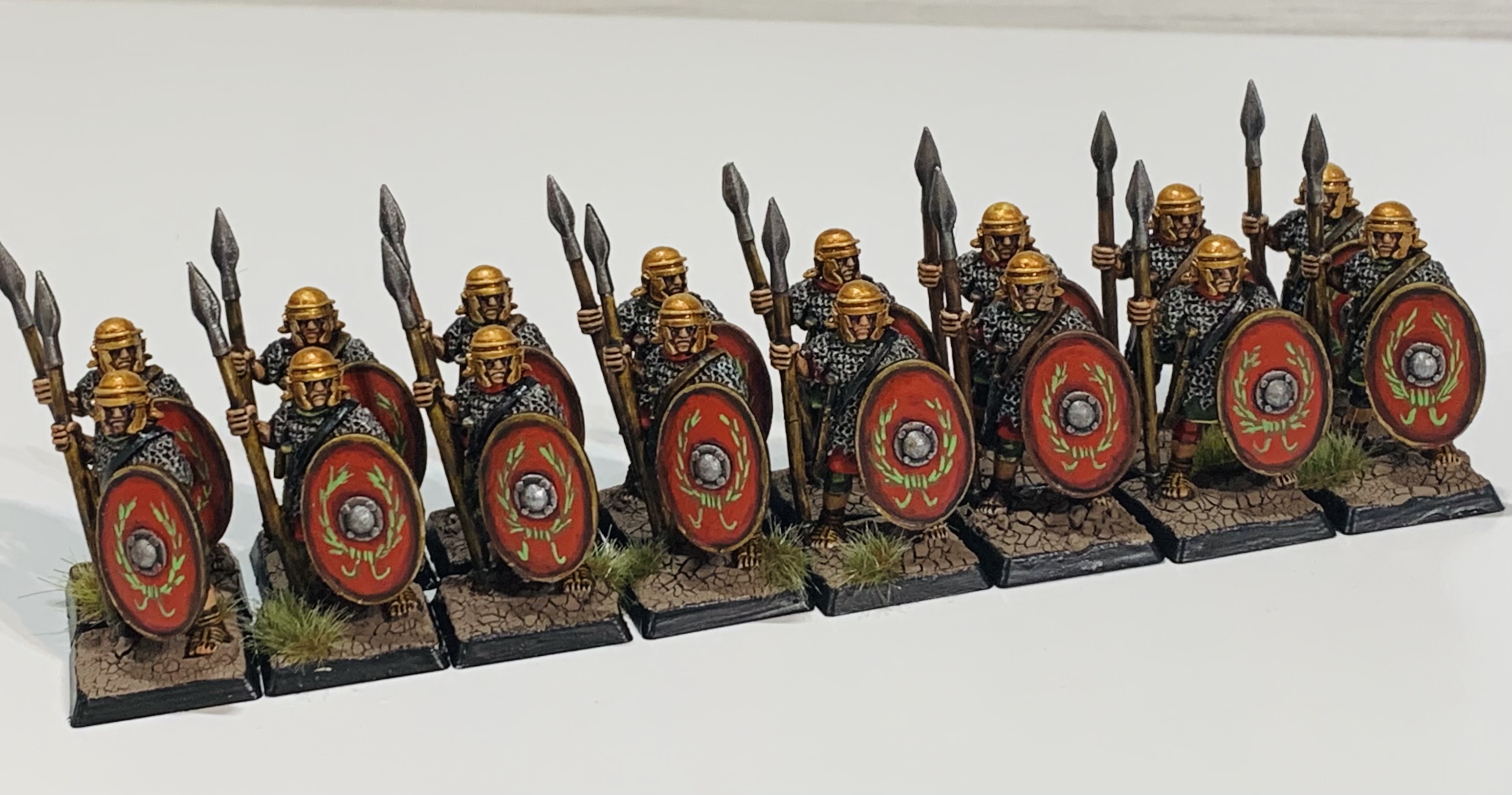 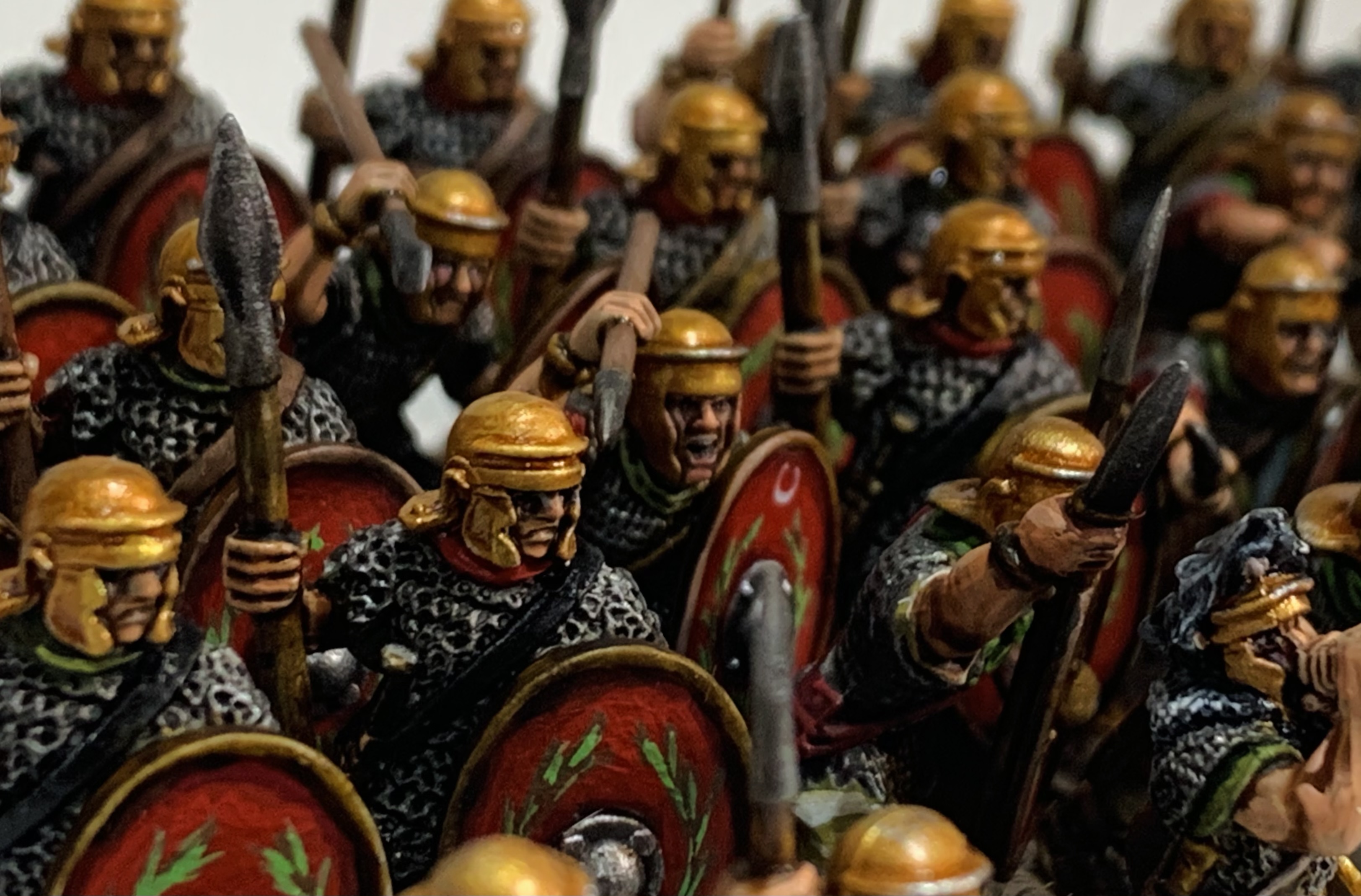 A group of foundry monopose lead auxilla finished which takes the unit total up to 40. Officially declaring unit one of this army complete!

Not generally my thing historical but I like good painting when I see it and these guys look great!!

Nice job on the unit filler, bit of left-over from the giant sprue me thinks 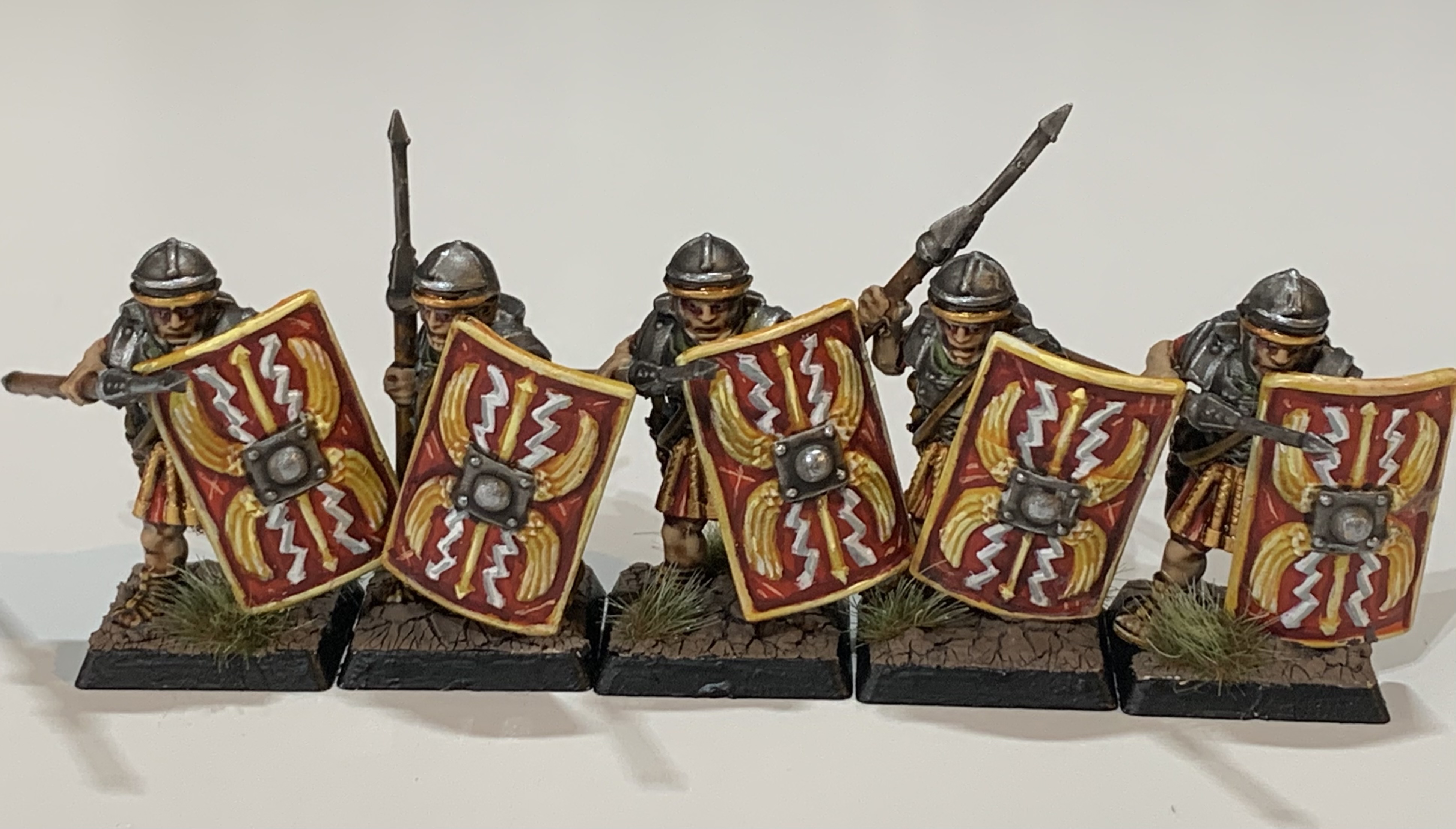 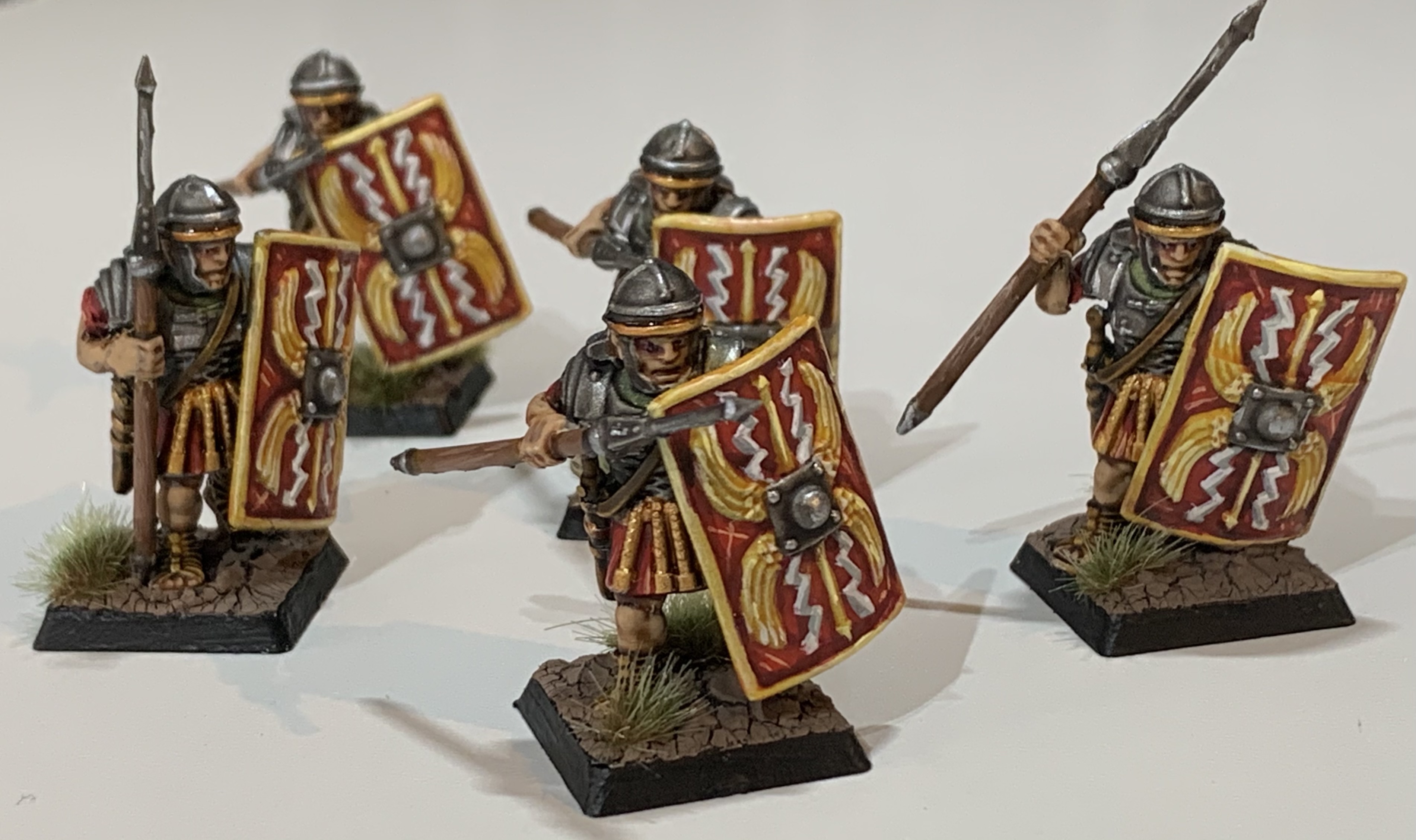 My first 5 3D printed legionaries have signed up. They are outnumbered by the auxiliary units and feeing a little nervous so I’ll have to paint up more ASAP!